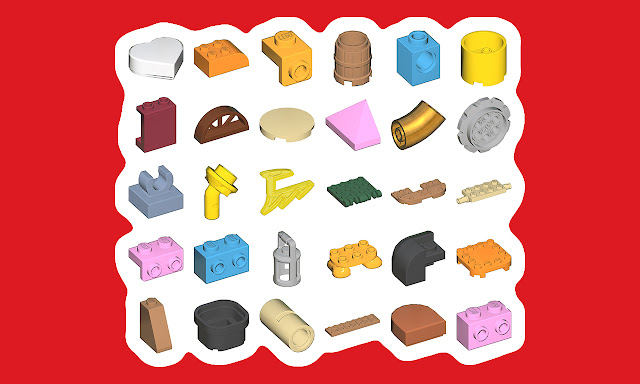 Following our exclusive coverage of the new moulds that would be appearing in the August 2021 wave of LEGO® Super Mario sets, today we will be looking at part recolours you can expect to find in the upcoming sets. A total of 46 recolours appear across the upcoming wave, in 18 different colors.

Five elements appear for the first time in Dark Azure. Within the LEGO Super Mario theme Dark Azure is associated with flying levels, so these elements predictable appear in aerial-based sets.

There are two part recolours in the fan-favourite Sand Blue colour. Both elements are associated with the Amp character who appears in the third series of the LEGO Super Mario character blind bags.

A single Sand Green recolour has been introduced, used as a support in the Luigi Starter Course. At first glance it’s not as exciting as other recolours, but I suspect builders will nevertheless find numerous uses for it.

One Earth Green/ Dark Green recolour appears in 71391 Bowser’s Airship, where it is used as the lid for a gunport.

Two Black recolours have been introduced. Of these, Brick Curved 2 x 2 x 1 1/3 with Curved Top - Corner (6359039 | 67810) is likely to be the most interesting, given the relative rarity of the design and the numerous building possibilities opened up by the part appearing in Black.

Three Medium Stone Grey/ Light Bluish Gray recolours appear in the upcoming LEGO Super Mario sets. Most of these elements are intended to be decorative rather than functional, and I suspect they will be appreciated as such by builders.

Two designs have been recoloured in Bright Yellow/ Yellow. Both of the elements are relatively new, and certain to find uses in the creations of builders.

A single Warm Gold/ Pearl Gold recolour appears in the form of the “Maxaroni” tube. I would expect this to be one of the most popular recolours in the wave, although it only appears in 71391 Bowser’s Airship.

Two parts have been recoloured in Bright Orange/ Orange.

A single Dark Orange recolour has been introduced, and appears in 71388 Boss Sumo Bro Topple Tower, which uses the element for the mouth of the eponymous Boss Sumo Bro.

A single panel has been recoloured in Dark Red for constructing the cabin of 71391 Bowser’s Airship.

Two new Reddish Brown recolours have been introduced. Worth highlighting is Window 1 x 4 x 1 2/3 with Spoked Rounded Top (6357261 | 20309) which, up until now, has been notably absent considering most other window building elements appear in Reddish Brown.

Taking the prize for most recolours is Medium Nougat/ Medium Dark Flesh, with nine recolours across the wave. The overwhelming majority of these recolours originate in 71391 Bowser’s Airship, where they are used for assembling the body of the ship.