A new month means new LEGO® sets are available today! Although if you wait until 6 March (date may vary across countries) and spend US$99 / €99 / £99 you also get the gift-with-purchase 40450 Amelia Earhart Tribute, which Kev Levell reviews for you now. No matter when you buy LEGO, please consider using our affiliate links: UK LEGO Shop | USA LEGO Shop | Australia LEGO Shop, for other countries 'Change Region'. New Elementary may get a commission. The products in this article were provided for free by LEGO; the author's opinions are not biased by this.

Before Christmas, my little girl was doing a topic at school about Amelia Earhart. In preparing for this review, I asked my resident Earhart expert what she knew about the aviation pioneer. Brace yourself for a little turbulence here, we have apparently learnt that Amelia was “cool”, “had a red airplane” and “flewed it ‘cross the ‘lantic ocean.” Oh, to be seven again! 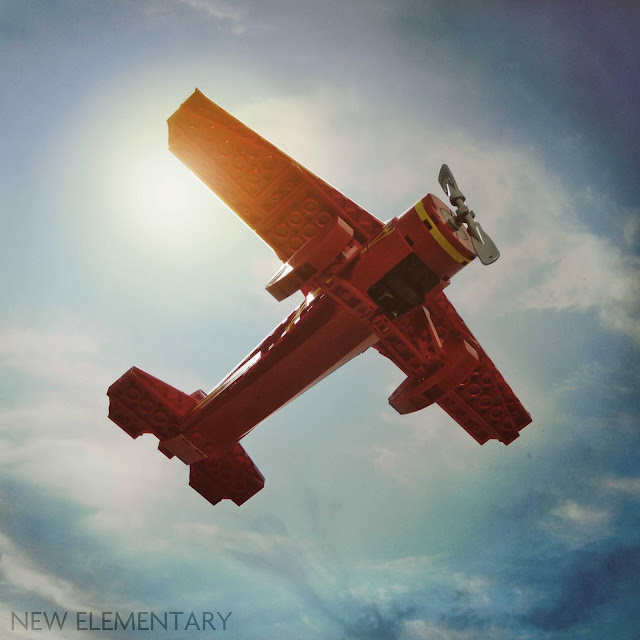 With that esoteric knowledge in place, come fly with me as we review the upcoming ‘gift with purchase’ (GWP) offering from LEGO®.

The period between the great wars, particularly in America, is sometimes referred to as the golden age of flight. One of the most enigmatic, well-known and iconic figures of that time was Amelia Earhart. 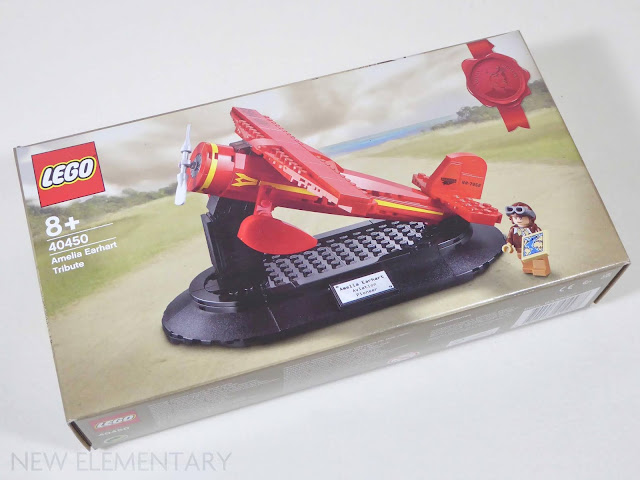 One aircraft Amelia Earhart is famous for flying was her NR-7952 Red Lockheed Vega 5B.

The Vega 5B was a seven-seat passenger aircraft with a wingspan of 12.5m and a length of 8.4m. Designed by Jack Northrop and Gerald Vultee, the 5B was introduced in 1928. One of the fastest crafts of the era, the Vega had a top speed of 165mph and was highly regarded by contemporary aviators as a craft for racing and setting records in.

It was during 1932 in this aircraft that Amelia set two of her many records. Firstly, in late May her 15hr non-stop transatlantic flight from Harbor Grace, Newfoundland, Canada, to Derry in Northern Ireland making her the first woman to fly solo across the Atlantic - then, secondly in late August her solo non-stop flight across the United States of America from Los Angeles to Newark, New Jersey was another first for a woman. 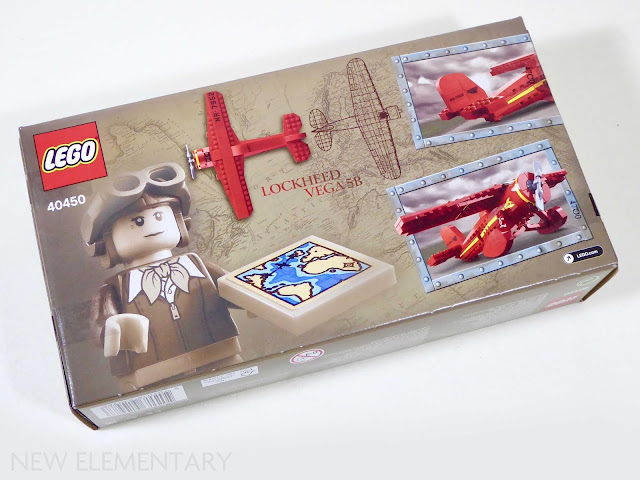 For this tribute being released to coincide with International Women's Day on 8 March, LEGO has chosen to depict Amelia with her Vega 5B.

As you might expect to be the case with a GWP, there are not any new moulds. There is however, one notable exclusive. 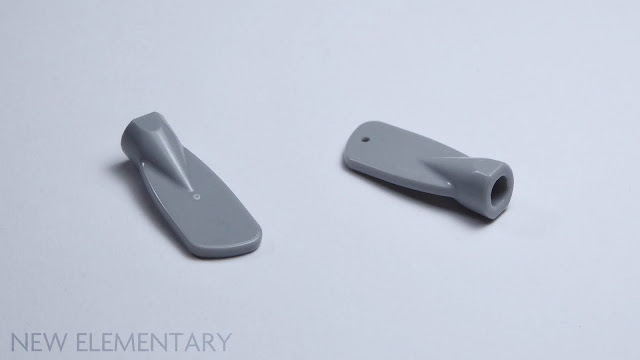 I am sure that bley fans will be pleased to see Equipment Oar Paddle End in Medium Stone Grey/ Light Bluish Gray (6337380 | 31990) making its debut in their favourite colour. It is the only exclusive part in the set, and there are 2 of them to be found here, although I strongly suspect this element will be featured elsewhere before very long.

There are a very small number of rarer parts too; mostly they are from the plane. I’m unsurprised that there are so few red ones, what with this colour being so prominent in the LEGO colour palette and given the size of the set. However, it’s always nice to see rarer parts making another appearance no matter how many there are. 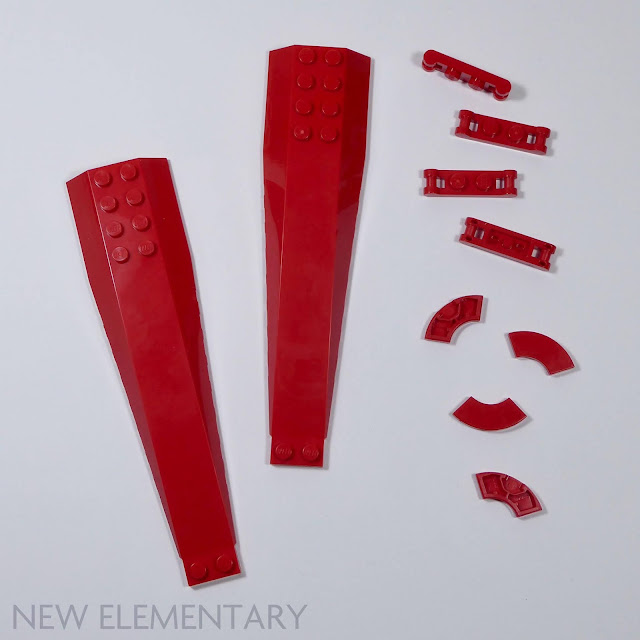 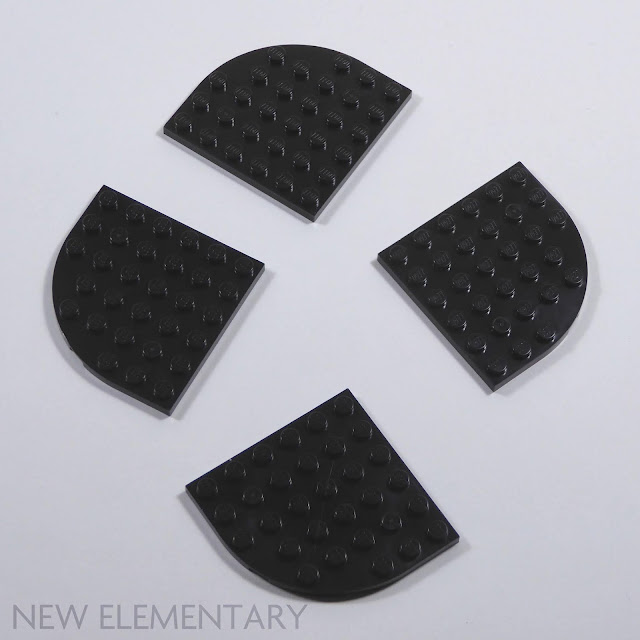 I have limited my criteria for ‘rarity’ to parts having appeared in five sets or less. If I have missed something, please let us know in the comments below. 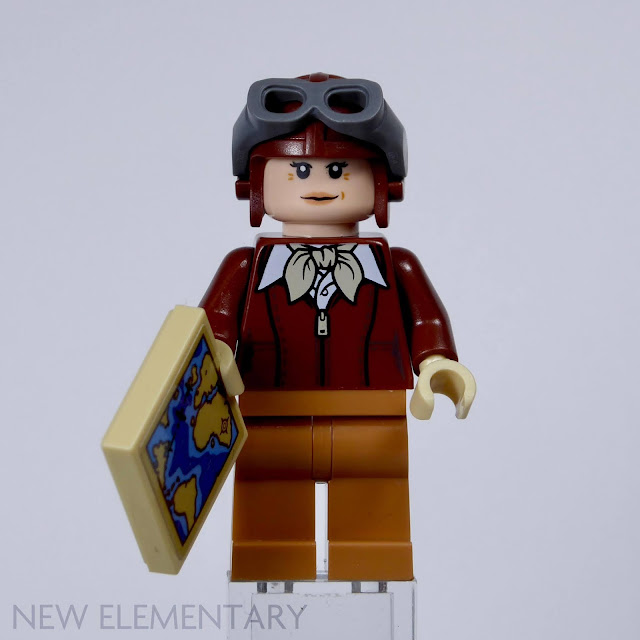 Amelia herself is a fantastic minifigure. We’ve seen the flying hat and goggles what feels like countless times now, but they are very much an appropriate choice here, even in these very familiar colours.

Minifig Head in Light Nougat [Hollow Stud] (6338706 | 3626) is a unique new print. It’s an excellent representation too, with an expression reminiscent of one I’ve seen Amelia wearing in so many photos of her. 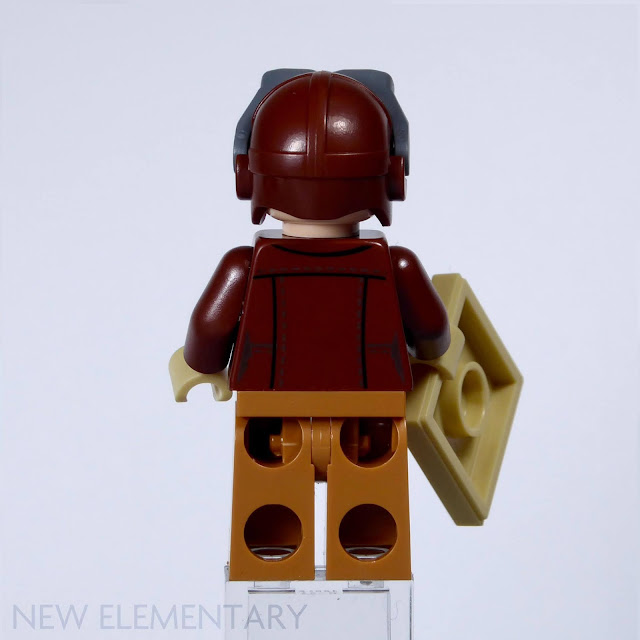 The new double-sided torso with neckerchief and leather flying jacket (6338710 | 973) is a unique print also and is obviously designed to match Amelia’s iconic runway look.

An alternate hairpiece would have been nice, there might not be an accurate approximation for her characteristic cropped bob, but I’m sure artistic license could have allowed for Minifig Hair Short Wavy with Side Part in Nougat (6234373 | 11256), even if it is a little coiffured and missing an essential windswept quality: 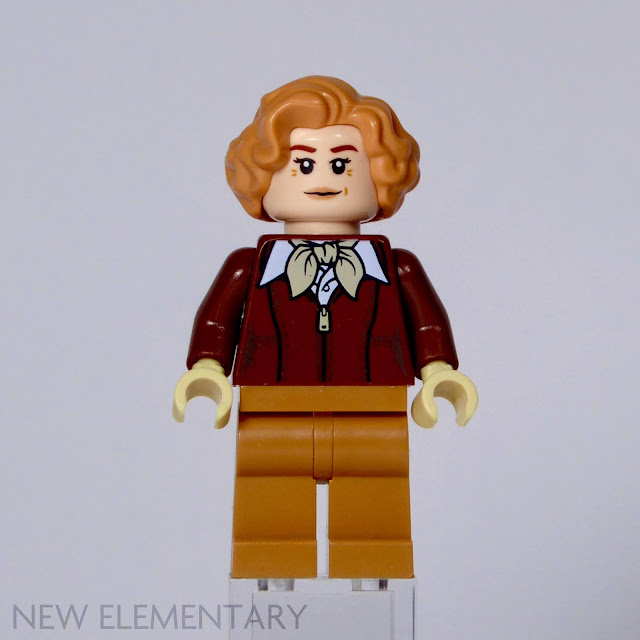 The hand colour could be considered an odd choice but these, I think, are supposed to reference artefacts she left behind, in this case flying gloves that can be seen here along with other ephemera. 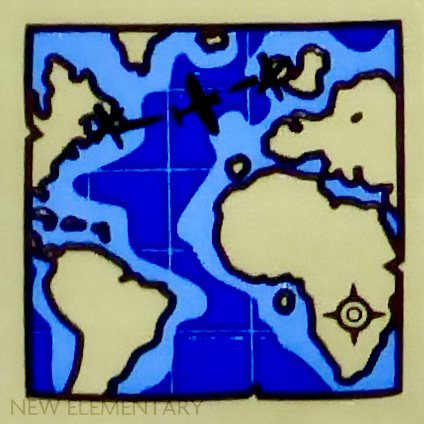 Amelia also has a map tile (stickered of course) that shows her flight path from Newfoundland to Derry. 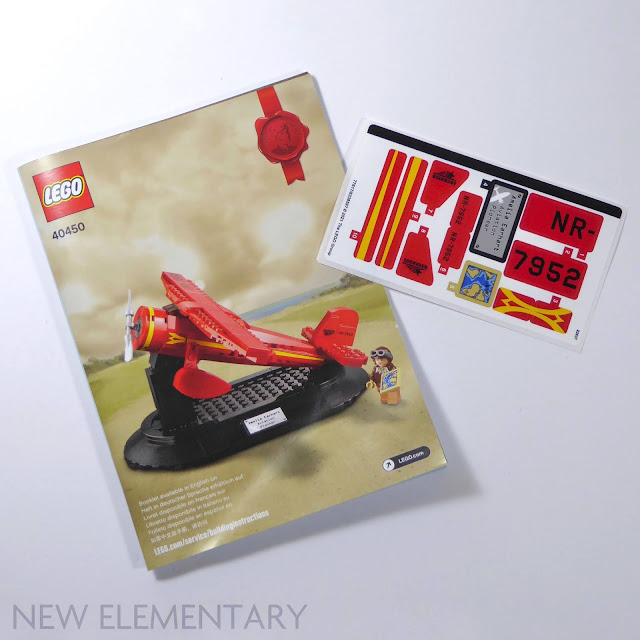 There are 5 bags of elements, 2 loose elements, a small instruction book and 1 loose sticker sheet.

There is a brief introduction in the instructions but I would encourage further reading to fully acquaint you with this remarkable person. 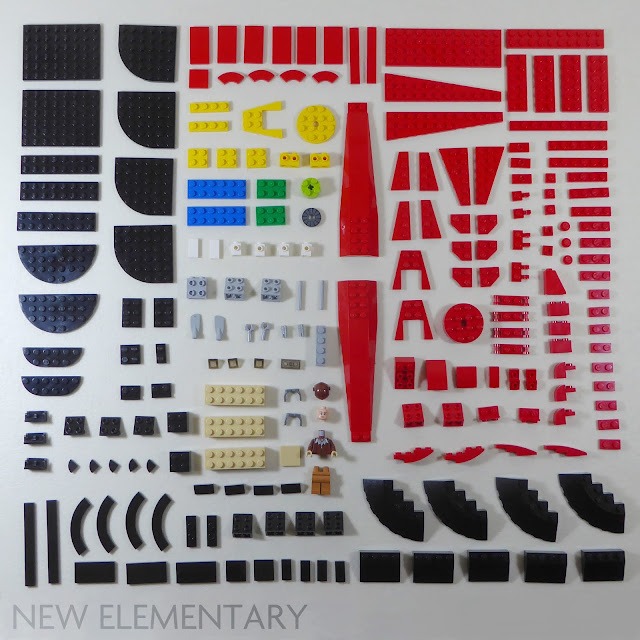 For some reason, building an airplane seemed to dictate to me that I 'knolled' all the parts.

“Preparation, I have often said, is rightly two-thirds of any venture.” 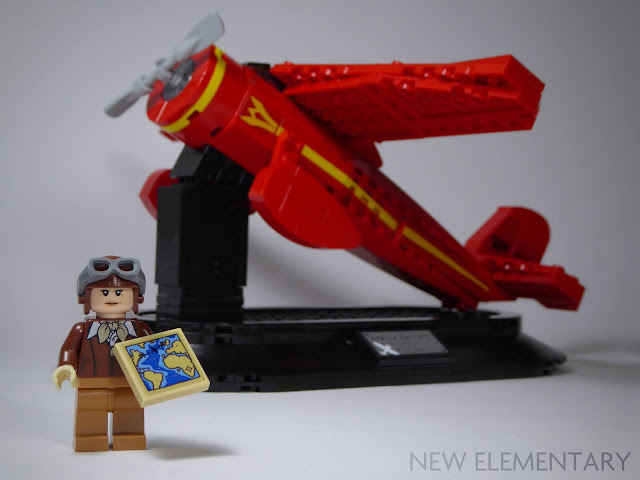 The striking red Vega 5B is a neat little build using familiar sideways-building methods to produce a reasonably faithful reproduction of the aircraft at the chosen scale. I have to say I admire the economy of parts here to create such convincing forms. At a short distance, I’d suggest this almost appears to be a model kit. 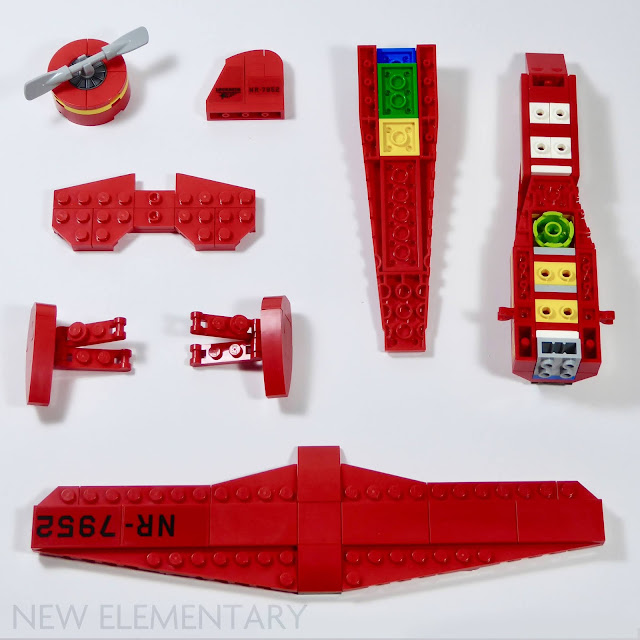 This is actually a deconstruction; it might not revisit each sub-assembly precisely but it does just about show the internal techniques used to create the fuselage. 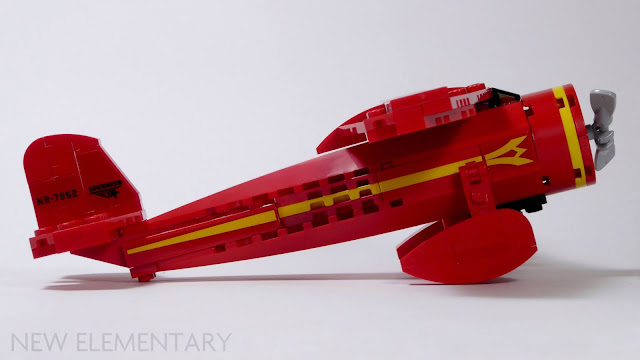 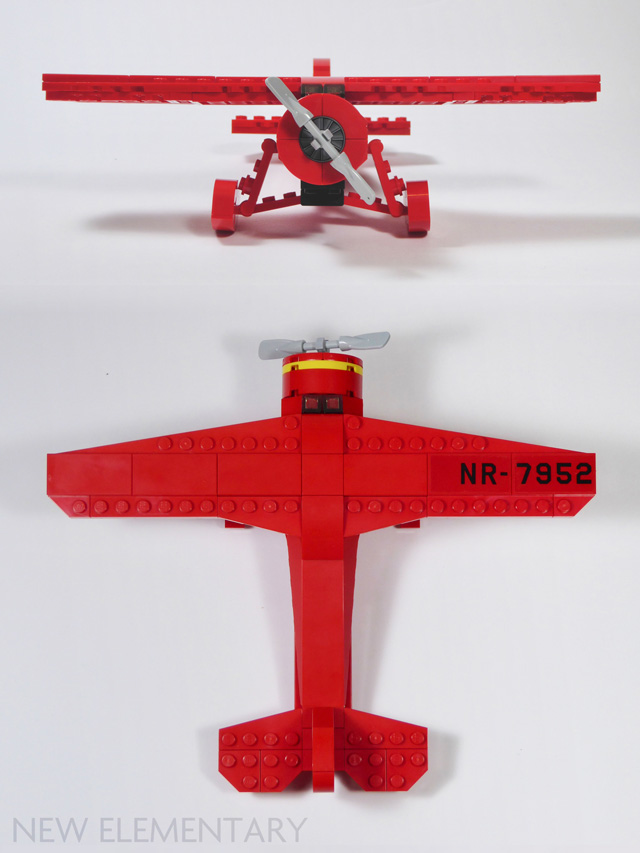 The identifying marks and insignia are well reflected. I’d rather have printed pieces, but in what I imagine is a smaller production run, I can see that stickers are a more affordable option. I have to say that for the small number of stickers used here they get a lot of mileage out of them! 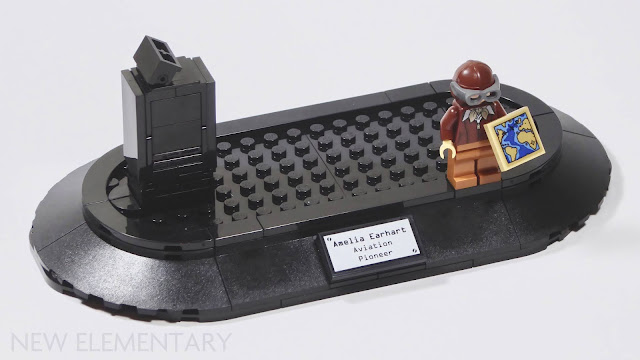 I found the black stand to be slightly odd for a number of reasons: Firstly, it is rather large; secondly, although the pillar is a clever construction, I couldn’t help thinking “there must be an easier way to do this!”; and thirdly, that pillar really is quite fragile! Which might not be a problem for anyone simply displaying this, but for my forthright would-be pioneering seven year old aviator, that base was irritating to the extent of being discarded after the second breakage.

Amelia’s disappearance and assumed demise at the age of 39 was tragic. It is amazing to consider her contribution to aviation and her impact upon equality for women in her short but incredible career. 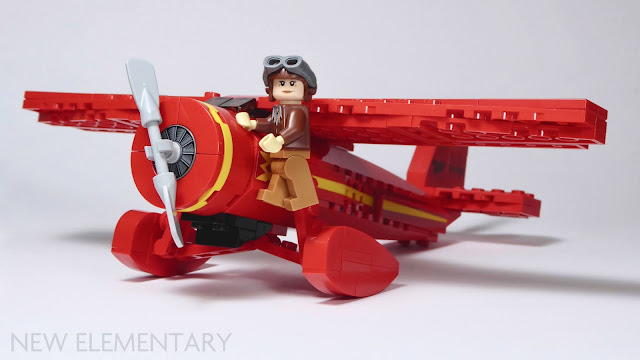 The Vega appears pretty accurate at scale and it's a really nice thing to swoosh about. The cantilevered wings are just stuck on top of the fuselage, which is pretty realistic. Although Amelia is a good figure, for some reason I just don’t feel like this thing hangs together especially well, I like it, but it bothers me too. I asked both my kids (my daughter is 7 and my son is 9) what they liked and didn’t, and mostly, their opinions reflected my own, they liked the plane but wished Amelia could fit in it.  I mostly agree, although I can see many implications of trying to make that possible.

Being brutal: the base feels like a waste of bricks and the plane has a tendency to break off, which might be a good thing if this wasn’t clearly supposed to be a display model. I know I’m reaching for the skies but I can’t help feeling that if they’d had the budget to increase the size of the plane they would have stood a chance of making it big enough to fit a pilot in, but then it would probably fail as a GWP.

This is the second ‘Tribute’ set LEGO has made, preceded by 40410 Charles Dickens Tribute last Christmas. (I have chosen not to include 40291 Creative Personalities that celebrated Hans Christian Andersen, as it was not named as a tribute to him.) I do hope we will see more sets commemorating other inspirational pioneers and worthy historical figures. If nothing else, the set does celebrate Amelia Earhart, I have learnt some inspiring stuff about what a phenomenal person she was. 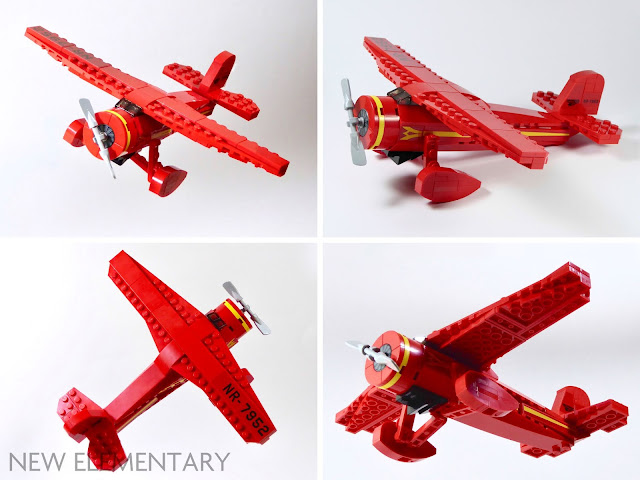 This set will only be available as a promotional gift with purchase. The promotion starts on 6 March 2021 and continues until 14 March but, from past experience, I know that these GWPs can run out a lot faster than a transatlantic flight! The qualifying purchase is a US$99 / €99 / £99 threshold, and is open across all themes. We’ve all been grounded recently, but if you are splashing out with your air miles, please consider using our affiliate link to complete your redemption: UK LEGO Shop | USA LEGO Shop | Australia LEGO Shop, for other countries 'Change Region'. New Elementary may get a commission

So, would I recommend you spend a cool hundred of your hard-earned currency to get this set? Heck, no! If you’re buying something else anyway, this is a nice little sweetener. I dread to think what the after-sales value is going to be on the minifigure though, because like her real life counterpart, LEGO Amelia is a pretty high flyer!