A first peek at 2021 for you today, in the form of two LEGO® sets from the Chinese Traditional Festival lineup: 80106 Story of Nian and 80107 Spring Lantern Festival. Lee (cityson) has scoured the images to find as many new, printed and interesting pieces as he could. 10 January 2021 is when these sets become available to the whole world; if you're buying please consider using our affiliate links, New Elementary may get a commission: UK LEGO Shop | USA LEGO Shop - for other countries, Change Region. 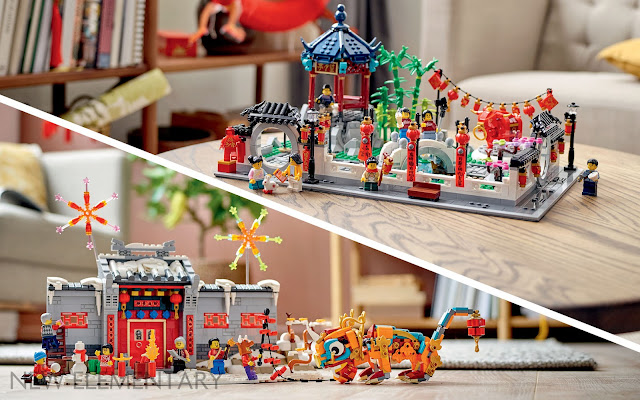 The two 2021 LEGO® Chinese Traditional Festival sets announced at the 3rd China International Import Exhibition (CIIE) on Friday 6 November absolutely blew me away. Not only are they great display pieces, these two upcoming sets are like the Cave of Wonders for builders who love elements, like us here at New Elementary. Unable to wait for the release of these awesome sets, I decided to go on a visual “part hunt” to find interesting parts for our readers in advance. 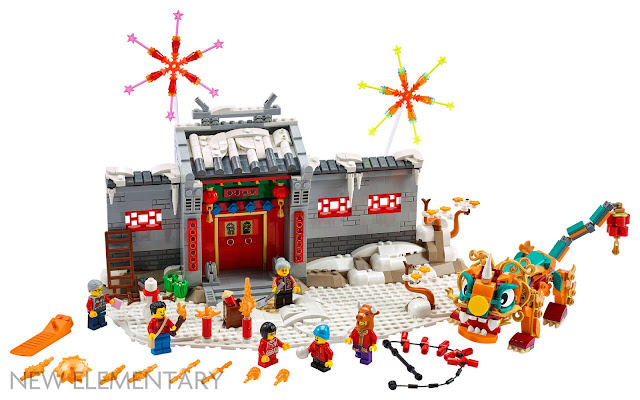 Nian is a beast that terrorises villages in traditional Chinese myths, and the story is essentially an explanation for all the loud celebratory traditions, as the villagers have to scare away Nian. The instruction booklet will include the story for educational purposes, presumably in a similar fashion to the facts in the Architecture set instructions, so I will leave out these details for the time being.

However, I would like to applaud the descision of the design team to turn this fascinating Chinese folktale into a LEGO set, instead of giving us another generic Chinese architecture with festive decorations (which would have been awesome anyway). To me, this shows their commitment when developing products related to different cultures (unlike some Hollywood blockbusters that think the mention of chi would make it “Chinese” by default). A surprise, to be sure, but a welcome one. Set designer Chris Perron and the creative lead Dennis Fong worked closely with Xiaodong Wen, who is responsible for the concept design of the graphics that were then designed by Paul Turcanu.

Exclusive Recolours in 80106 Story of Nian

Just like their predecessors, these Chinese festival sets come with an amazing selection of recoloured elements. Here are the ones I can identify so far from the official images of 80106 Story of Nian. 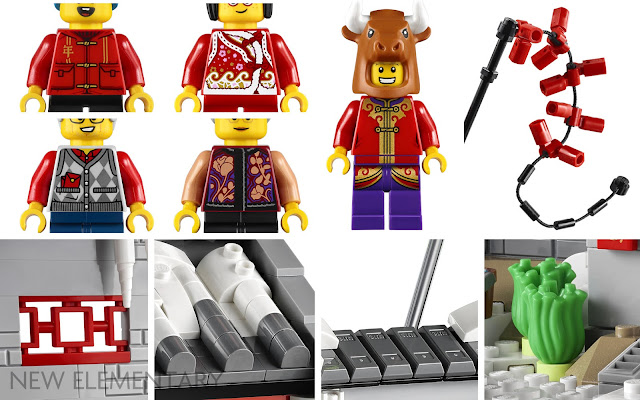 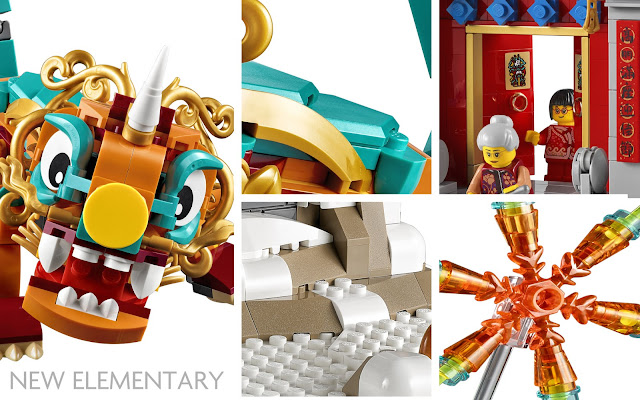 Printed Elements in 80106 Story of Nian

The only printed elements I spotted in this set are the full set of new year greeting couplets (or Fai Chun 揮春) at the entrance: printed Red 1×6 tiles on each side and a printed Red 1×4 tile across the top. For our non-Chinese-speaking readers who are curious, here are the meanings of the couplets:

The designers have included an extra treat here. If you put the first two characters in the two sentences together, you get the Chinese name of LEGO (樂高). Probably one of my favourite Easter eggs ever in a LEGO set!

Regarding the use of stickers for the decoration on the door, as I have read a number of people complaining about the use of stickers over printed elements here: I would like to point out that in real life these are meant to be posters of the Threshold Guardians (or Menshen 門神) stuck to the doors, so I tend to think it is a conscious choice by the designers instead of a cost-saving decision. 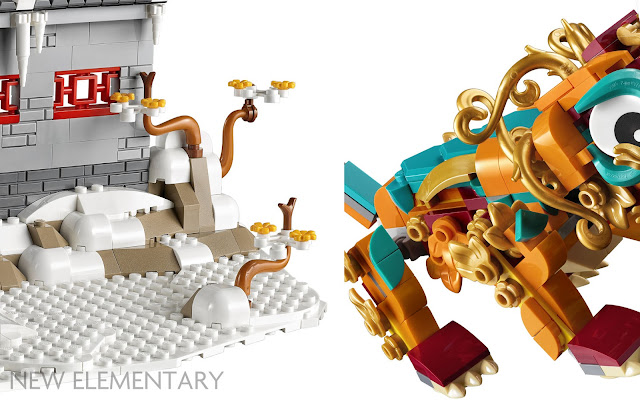 Apart from the exclusive new recolours and prints, I spotted a number of rare elements within the landscape and the Nian as well: 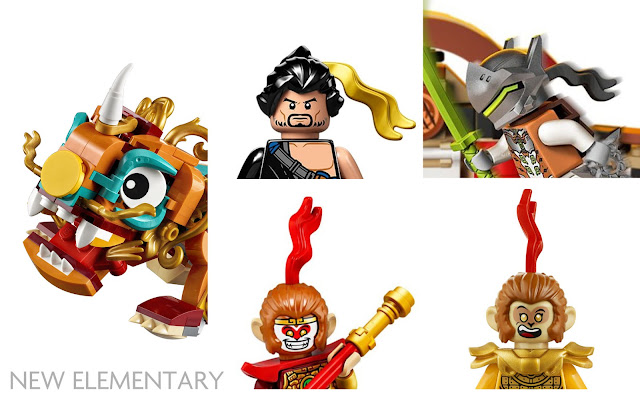 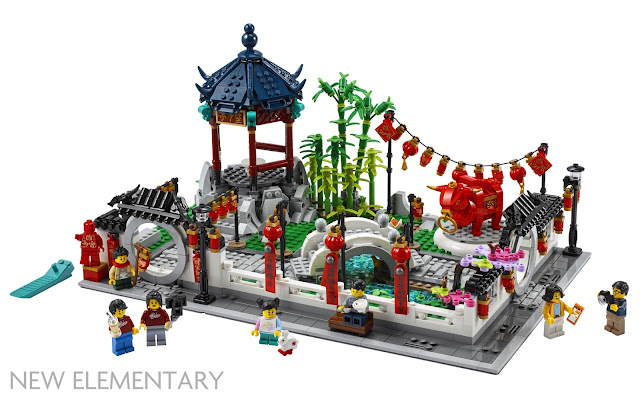 Spring Lantern Festival isn’t exactly another celebration of the Chinese New Year, it is the first full moon of the year (15th day of the first month in the lunisolar Chinese calendar). While lanterns are commonly associated with another Chinese festival, the Mid-Autumn Festival (which confusingly is also known as the "Lantern Festival” in some places), the two should not be mixed up. Again, it is expected that the instructions of the set will include a short introduction to the Spring Lantern Festival, so I will keep it short here. 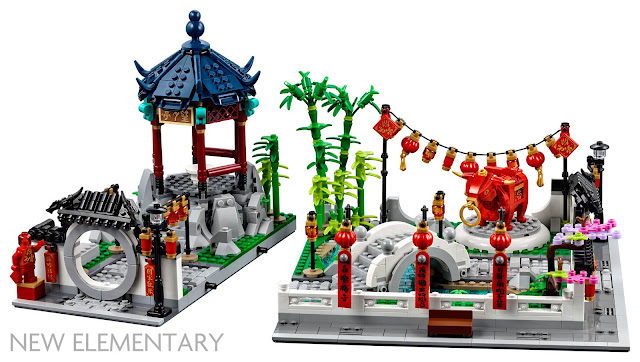 The garden is designed across 2 modules; one on a 16x32 baseplate and the other on a 32x32 baseplate. Familiar? Not only does this allow builders to rearrange the garden, you will be able to fit them into your Modular street setup perfectly. And once again, I really appreciate the design team’s passion to explore these more specific aspects to the Chinese festivals – in this instance the set was designed by Justin Ramsden, again collaborating with Dennis, Xiaodong and Paul.

If you are a huge fanatic of new elements, this set is a gold mine for you - or perhaps a dark blue mine? 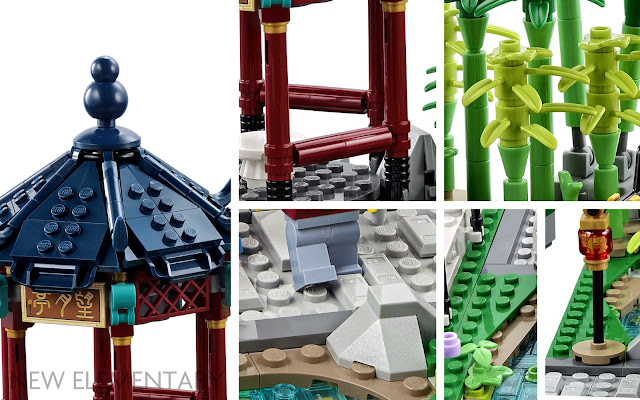 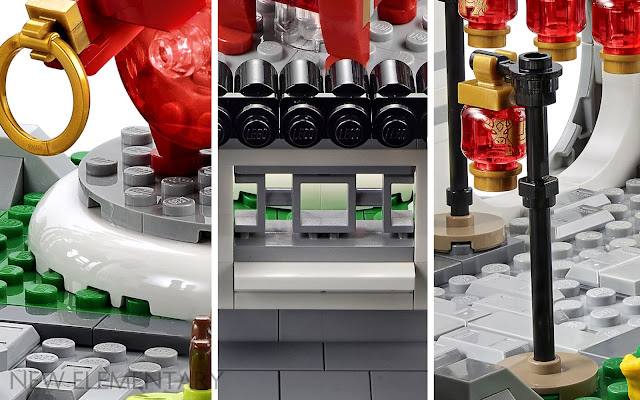 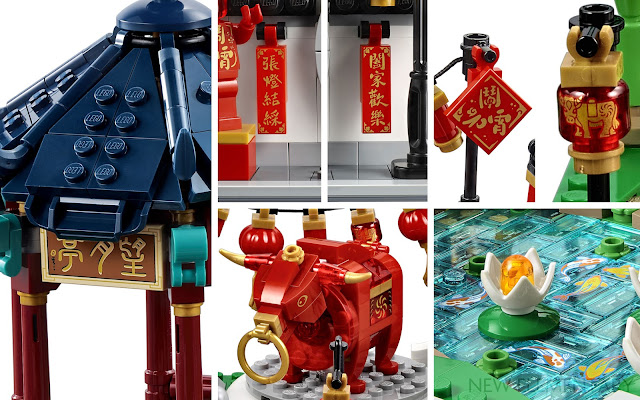 On a side note, this set brings us a really nice collection of exclusive civilian torsos, including one for the statue saying “Celebrate the Spring Lantern Festival on 15th day of the first month in the lunisolar Chinese calendar” (正月十五鬧元宵 – yes, all that in 7 Chinese characters) and one with a Monkie Kid reference. In addition, there are the White 1x1 Round Tiles with new tangyuan print and a printed rabbit lantern.

Besides the impressive amount of exclusive new pieces, this set also includes a lot of rare elements. 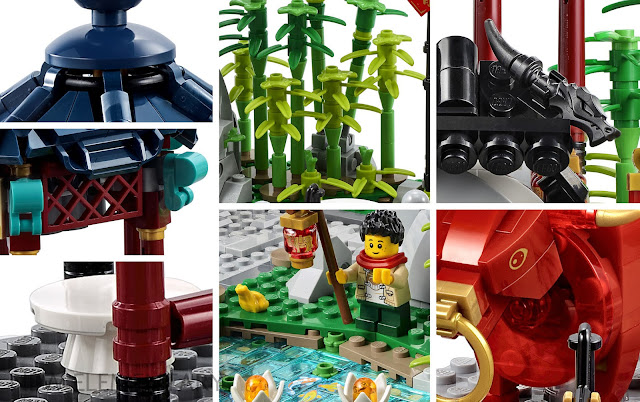 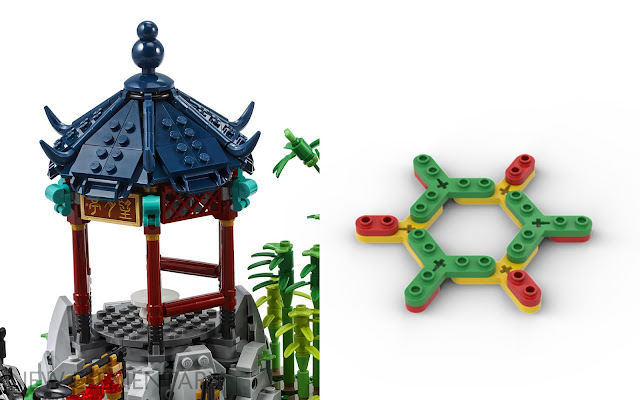 Another thing I found out, while constantly zooming in on the images during my “part hunt”, was the ingenious construction of the hexagonal pavilion using the Technic Plate Rotor 3 Blade (32125) in conjunction with 1x2 Rounded Plates, something I will keep in mind when I have to make hexagons in future MOCs.

On that note, I conclude my part hunt through these two incredible sets. Needless to say, I cannot wait to get these sets myself to experience the build and discover more hidden details… and more importantly, to see if I have missed out on any of the interesting elements! Did you spot any? Let us know in the comments.

All images are ©2020 The LEGO Group. LEGO 80106 Story of Nian and 80107 Spring Lantern Festival will be available in China and Asia Pacific markets from 1 January 2021, and from 10 January on LEGO.com and other markets in the world.

Thanks to Jonas Kramm for research assistance.

READ MORE: Check out our articles from October, to see if there are any sets where you are interested in learning more about their parts
LEGO® Shop at Home
USA: Save up to 30%. See what's on sale!