LEGO® 10276 Colosseum is released today and as an "Act III" to his examination of the build and the elements, Kevin J. Walter now provides a historical perspective to the building – illustrated with LEGO, of course! Buying this set? Consider using our affiliate links: UK LEGO Shop | USA LEGO Shop | Australia LEGO Shop, for other countries 'Change Region'. New Elementary may get a commission. The products in this article were provided for free by LEGO; the author's opinions are not biased by this. 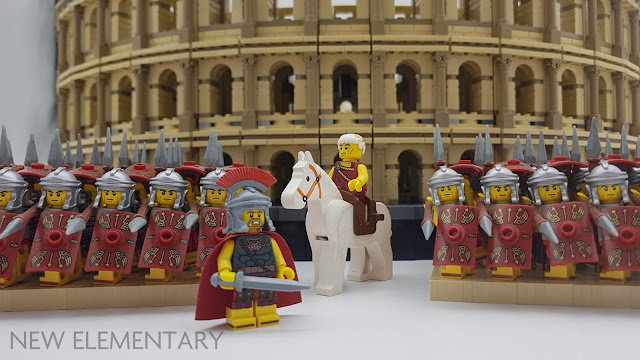 Nero's colossal ambitions in giving the city of Rome a new shape, a shape that should be closely associated with himself, foreshadowed and went on to define the Colosseum. After the great fire of Rome in the year 64 (all dates given in this article are AD), which according to ancient historians was allegedly caused by the emperor himself, large swathes of the city were left uninhabited and many properties could be bought for a small percentage of their normal worth.

A massive palace called the domus aurea (lat. golden house) was built, together with its own gardens, lake and a colossal statue of Nero. Four years later, in 68, turmoil and civil war shattered the Roman Empire, which ultimately led to Nero’s suicide. The following year, 69, was termed the Year of the Four Emperors: Galba, Otho, Vitellius and Vespasian. The latter, a successful general of Nero’s in the First Jewish War, gained enough power and resources to ultimately declare himself emperor. His son Titus took over the task and finished the war in 70 with the sacking of the temple of Jerusalem (the Western Wall of which are the only extant remains). To consolidate his power, Vespasian returned parts of the properties acquired by Nero, and in the place of the lake of the domus aurea he ordered the construction of a massive amphitheatre of stone, the one which posterity would call the Colosseum. 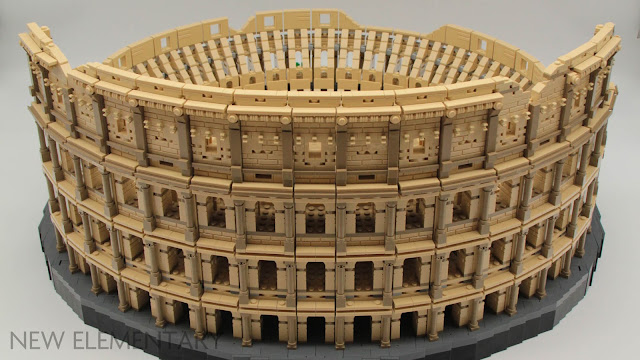 It is a common mistake to assume that the name Colosseum comes from its massive size and appearance. In fact, the name derives from the colossal statue of Nero, which was one of the few remnants of his reign that survived (although the facial features of the statue were remodelled after his suicide). In a twist of historical irony, while Nero did suffer damnatio memoriae after his death – the attempt to erase his name from history – Vespasian did not manage to stamp the new arena with his name. The name amphitheatrum flavium, after the dynasty that constructed the arena, never really caught on.

The construction began in 72 and was completed within a few years, in 80. Vespasian himself did not live to see his amphitheatre finished; he died in 79. Initially the structure was planned with three stories of arcades. Under his son and successor Titus a fourth story was added, but without arcades and instead out of massive stone. As an epigraph states, most of the horrendous building costs were provided by spoils of the Jewish war and the sacking of the temple in 70. To celebrate its completion in 80, 100 days of games were held, with naval battles, gladiatorial fights and animal chases.

The Colosseum is, as defined by its oval shape, an amphitheatre which means something along the lines of “double theatre” or “theatre of two halves”. Measuring 188 x 156 x 48 meters, it is the largest Roman amphitheatre ever constructed and was the model for many subsequent structures.

Its appearance is defined by the three stories of arcades and its half-columns - Doric on first, Ionic on second and Corinthian on third level. 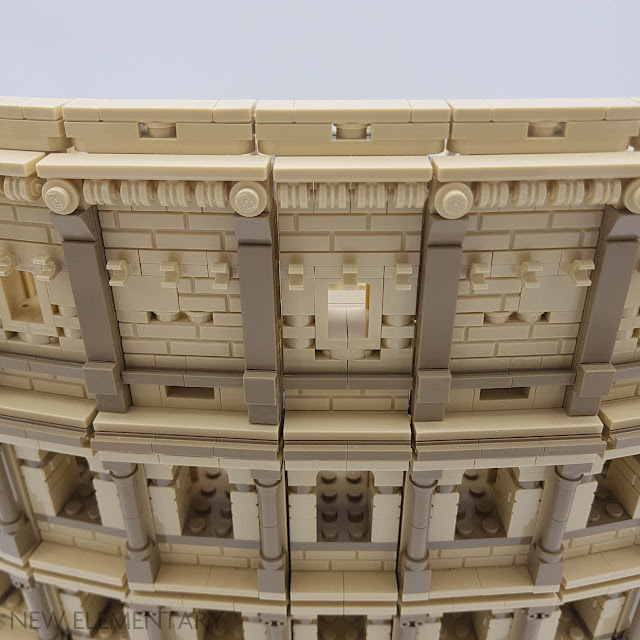 The added fourth story/attic had alternating square windows and shields. The attic held the 240 masts and corbels as well for the velarium (lat. sunroof), protecting spectators from rain and sun. The work of unrolling the sunroof was done by enlisted sailors from the naval base at Misenum (near Naples). 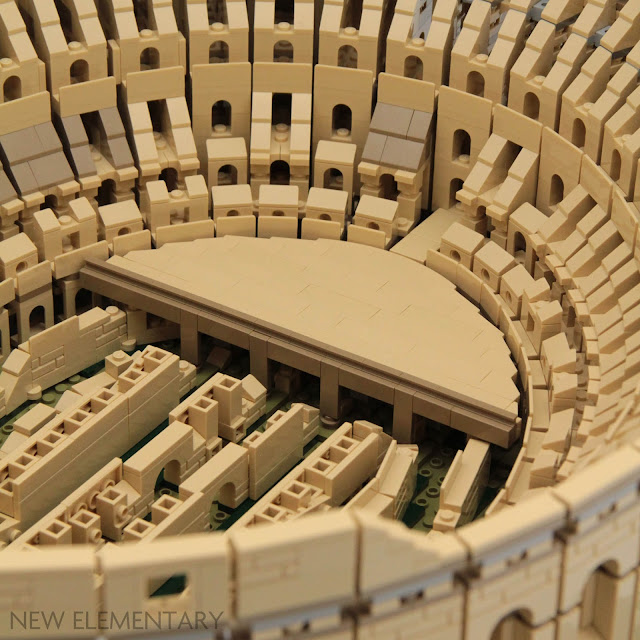 76 of the arcades on the first floor were numbered, as well as the staircases, providing easy access for the ordinary spectator to their seats (essentially the same system is used in all modern sports stadiums). The axial entrances were more elaborate and decorated, reserving the entrance for the emperor or high magistrates. The spaces of the second and third floor arcades were filled with statues; nowadays empty.
An estimated 50,000 spectators could be seated in the Colosseum. Boxes on the short axis of the oval were reserved for the Emperor and the Vestal Virgins. The other seats on the podium (lat. first tier) were filled by senators. The other noble classes and equites (knights) filled the next level. The tier above was reserved for the plebeians, ordinary Roman citizenry – also ranked from wealthy to poor. The last level, at the top attic and the gallery and built under Domitian, could be used by women and slaves. The complete seating arrangement was strictly ordered by social class and wealth, from bottom to top, rich to poor. 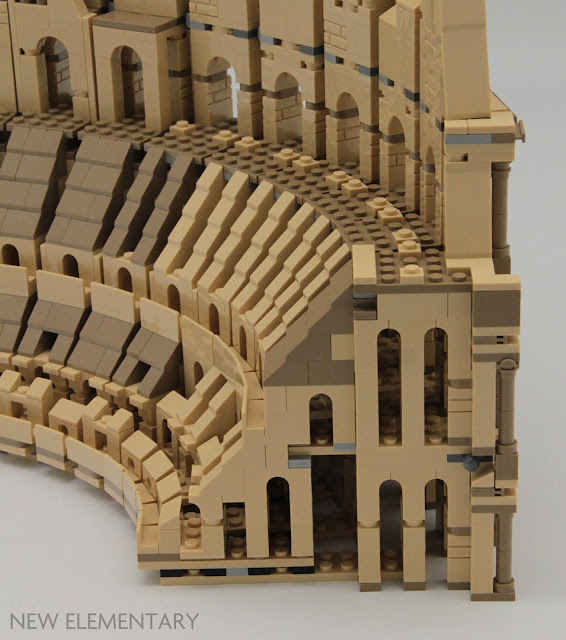 At its inauguration, the arena lacked a subterranean level. This enabled the flooding of the arena for the  holding of naval battles. But such naumachiae were not held often and only a few years after its inauguration Domitian, brother of Titus and last Flavian emperor, contributed his part to the construction. 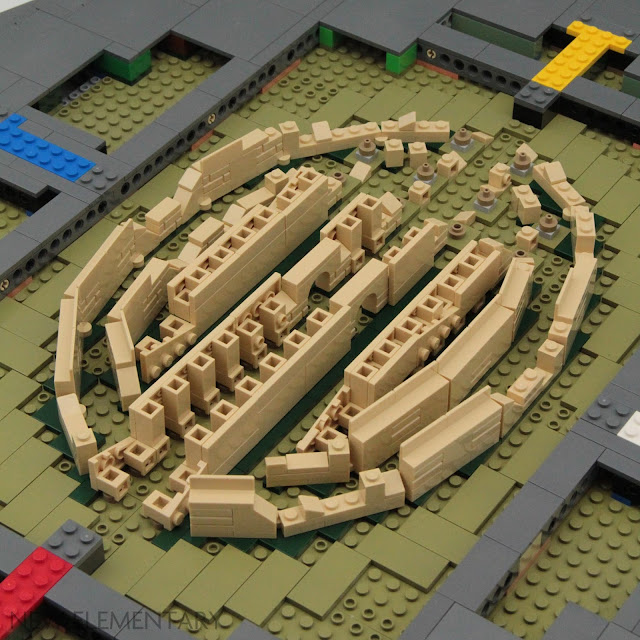 Underneath the arena he constructed the hypogeum, a basement with an elaborate system of lifts, cages and ramps which housed the gladiators, delinquents and animals. It was also used for scenic events during the spectacle such as decoration and scenery. Gasping spectators would be presented with a scene rapidly changing from desert to forest within a matter of minutes. 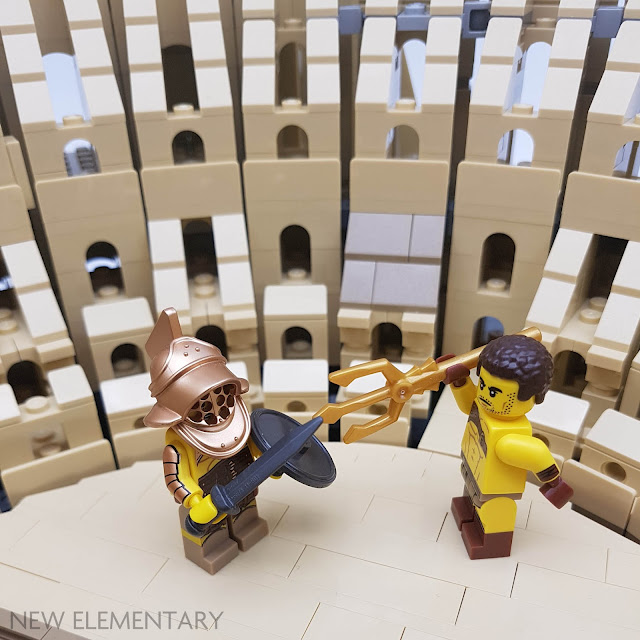 The games and events held in the Colosseum were as varied as they were gruesome. Most common were the munera (lat. gladiatorial fights) and venationes (animal chases) but there were also ad bestiam (executions of criminals by animals) or ad ferrum (criminals in fights against each other). 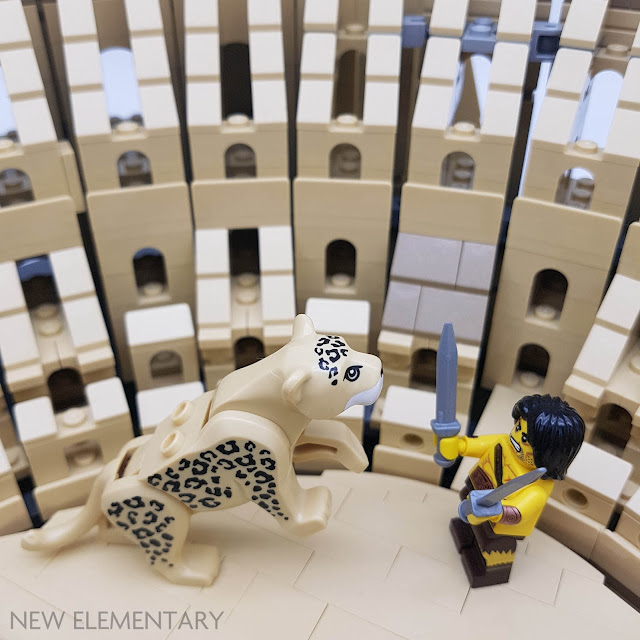 Cassius Dio (163-235) gives a number of 9000 animals at the inauguration in 80, while Emperor Trajan’s games, celebrating his victory in Dacia in 107, featured 11,000 animals and 10,000 gladiators over a time span of 123 days. These enormous numbers are highly disputed in academic circles, as they are quite likely exaggerated; also, the sources do not specify whether these numbers refer merely to those who were killed or to all participants.

In the following centuries and with the rise of Christianity in the Roman Empire, the popularity of munera and venationes sank. In the early fifth Century Emperor Honorius prohibited the games, though munera were shown until 434 while the last venatio in the Colosseum took place in 523.

The building itself underwent minor repairs several times in the centuries following its opening and one major renovation in the early third century, for which the Colosseum had to close its gates for about five years from 217-222. In the middle ages and early modern period the building was damaged by earthquakes and served many different purposes. For the popes and ruling families of Rome it was used as a quarry for their own building ambitions. Together with the earthquakes, this trend most strongly defined the modern-day appearance of the Colosseum. Nonetheless, it did continue to serve as a theatre, a castle and even as housing for the city’s population. 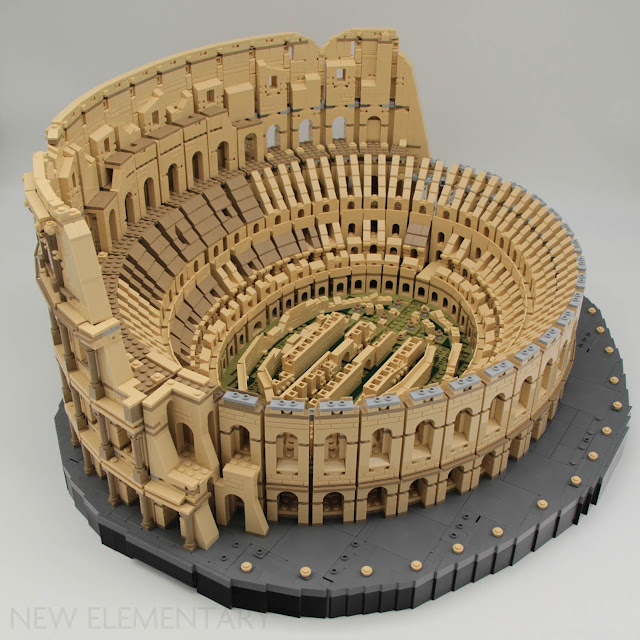 Since 1999 the Colosseum has also served as a monument against the death sentence. When a state abolishes the death sentence or suspends it, the Colosseum is lit in many colours. The patronage over this is held by the Italian Government, Amnesty International and other organizations. This kind of re-appropriation is remarkable, showing how an institution which once executed many death penalties and killed people for the joy of the spectators eventually became a vocal statement and plea against death.


Today the Colosseum is the most visited tourist site in Rome specifically and Italy in general. It also has many links to pop culture, such as the 2010 video game Assassin’s Creed Brotherhood or the extended version of the building in Ridley Scott’s 2000 movie Gladiator. Though not pop culture per se but instantly recognisable are the paintings of Jean-Léon Gérôme. Many of you will be acquainted with the famous painting of 1872 pollice verso – the turn of the thumb. Gérôme’s work contributed to the popular modern stereotype (used in Gladiator, amongst other things) that a thumbs-down automatically means death. It is disputed in scholarship whether the thumb gestures signify death or mercy. One of the more accepted opinions within academia is that thumbs-up means death and represents the deathblow to the throat of the opponent, while thumbs-down means life and represents the lowered gladius sword.

Regardless, the games and gladiators were much more popular back in the day than they are today. The countless mosaics, frescoes and graffiti depicting gladiators found in Roman ruins throughout the empire are a testament to how highly regarded and popular the games were. As for today, the various films are an indicator for the continuing fascination for the ancient Roman panem et circenses and its hosting site – the amphitheathrum flavium, or simply Colosseum. 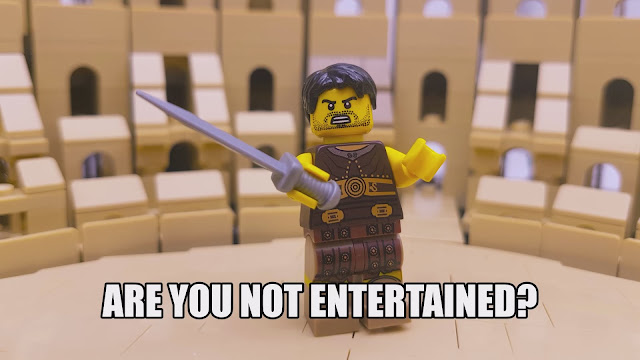 READ MORE: If you enjoyed Kevin's article check out his site for more history in LEGO form: Public BRICKstory


All text and images are © New Elementary unless otherwise attributed.
Posted by: Admin Posted on 11/27/2020 04:24:00 am
Email ThisBlogThis!Share to TwitterShare to FacebookShare to Pinterest
Labels: Adults, Architecture, Creator Expert