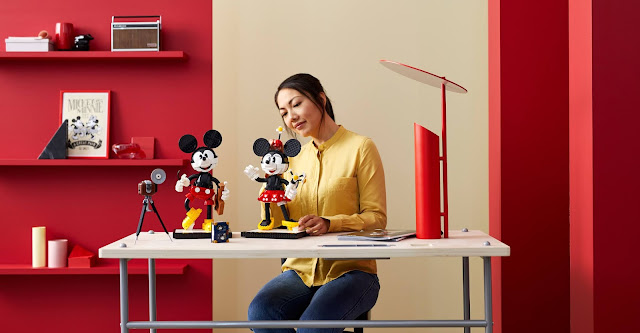 The set is on its way to us for review but we couldn't resist posting about it straightaway, as not only are there some really fascinating, useful new moulds but also the first pieces cast in a new 'colour' (or to describe it more properly, an 'effect') that was spotted on the LEGO palette earlier this year. 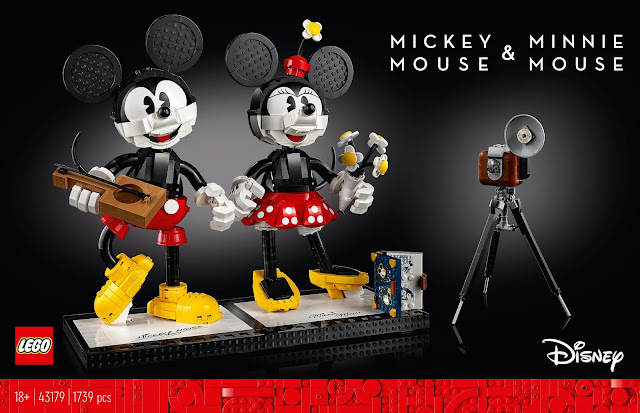 The packaging bears the new style introduced for 'Ages 18+' sets with a yet another variation of the strip pattern design around the bottom, different to other sets we have seen like Haunted House, The White House and now Crocodile Locomotive. Furthermore, wording in the press release promotes the marketing approach the LEGO Group are now taking with these adult-oriented products, such as "take time for you", "clear your mind", "experience a satisfying, hands-on build as you recharge", "memories and quality alone time are waiting... building these high-quality figures helps you escape your daily routine". 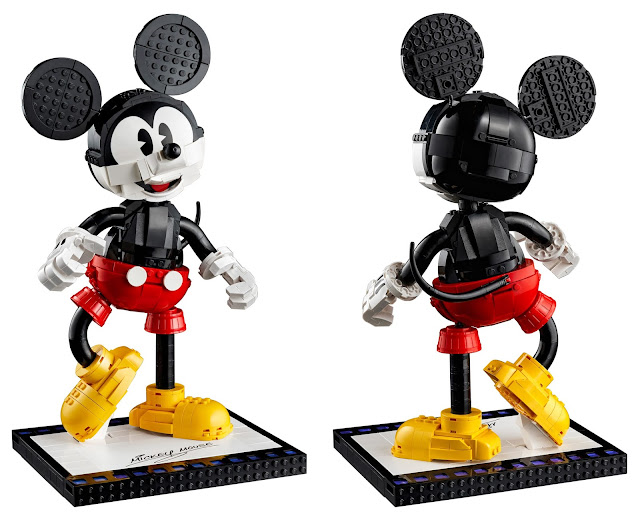 This set strongly represents their strengthened focus on collectable items that are intended for display. "These dynamically posed models not only come dressed in their instantly recognisable original outfits, they also come equipped with a series of unique buildable accessories to pose with, including a retro camera, a guitar and a photo album complete with pictures of the iconic duo’s adventures from years gone by – creating endless possibilities when it comes to displaying the beloved couple." 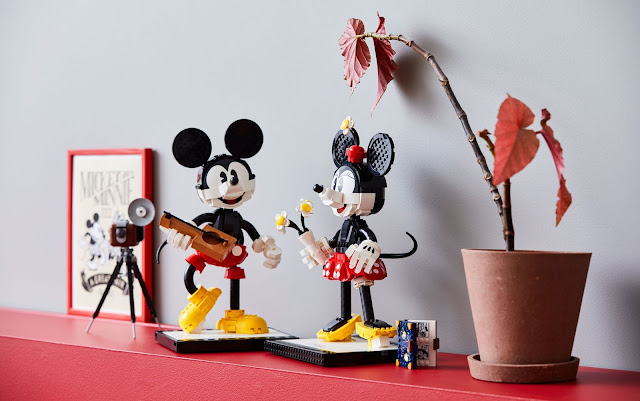 Anyway enough of this chit-chat; we're here for the elements!

The curved arms of these iconic rodents are made from an entirely new piece that appears to be a larger macaroni piece with a 2-module diameter. (I will always think of it as the 'Mickey Macaroni'.) Unlike the existing, 1-module macaroni tubes that bend through 90°, these parts are 45°. Therefore eight of them will make a circle (or torus, rather) and it seems you get ten in the set.

They connect the same way though; using Technic axles. They seem to be partially hollow with an inner tube for the axle - I wonder if connecting a small macaroni tube to a large one will match up nicely with the inner tube? We will take a closer look when we have some delicious Mickey Macaroni in our hands!

Then there is the Reddish Brown camera, which has some very interesting rounded corners!

At first it looks like a 2x2 corner brick with rounded corner and smooth top, but note that the smaller part next to these new corner pieces is the existing part 6091, Brick, Modified 1x2x1 1/3 with Curved Top. Could it be a matching corner variant of that? And what would that look like? Here's one we made earlier.
Happily our own contributor Victor Pruvost mocked up exactly that piece five years ago when he was thinking of LEGO pieces he'd really like to have! Undoubtedly, the same design was patented by the LEGO Group many moons before then.

Mickey and Minnie's eyes are another new part, although we really need this to be provided in plain colours ASAP to be able to use it! It is a dish 10 modules in diameter, but unlike the existing 10x10 dish (or any LEGO dish as far as I recall), this one is a half-dish. 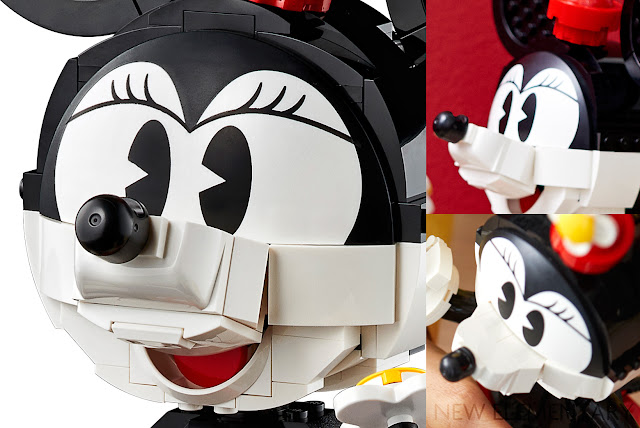 As many have noticed, LEGO don't seem very good at printing light coloured ink on dark elements these days (more info about that coming soon) and so either they have fixed the issue here, or that is a co-injected Black with White mould. The eyelash detail on Minnie is rather fine though, which seems to my untrained eye to be a challenge to achieve with co-injection. Could this be printing on top of a co-injected mould?

Many of you have asked about the piece used for the mouse snouts. It is not new, and we will discuss the recoloured parts in our main review article but let's cover a couple off now. 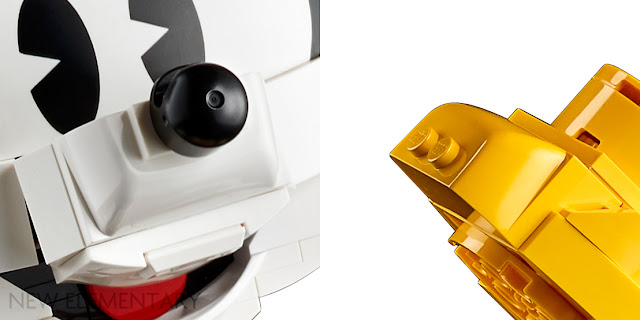 The picture above also contains another noteworthy recolour that many are asking about: the noses. LEGO designer Ollie Gregory actually mentions this in the press release: "To create the tips of their noses we even had to bring back the LEGO Classic Space Helmet in black, which hasn’t been seen since 1987". This is, of course, the new stronger version (50665) of the helmet. There have been many variants over the years.

Ollie mentioned a couple of other interesting colour-related things for our benefit in the press release. "As a surprise for builders, the characters insides are built from colourful elements inspired by classic outfits worn by the the pair in the past." Always nice to see some thought going into the filler brick! And then: "LEGO fans will also notice that we have debuted a new colour in this set, 363 – TR. Brown with Opalesence, the first time it is included in any set – so there’s lots to explore with this build!”  Hmmm, thanks for that Ollie, as it was not immediately obvious!

Earlier this year we reported on a new 'effect', similar to glitter, being applied to existing LEGO colours: 362 Transparent Blue with Opalescence and 364 Transparent Medium Reddish Violet with Opalescence. Then, on the updated 2020 LEGO Colour Palette spotted in designer videos and possibly also in prototype versions of LEGO DOTS gems, another opalescent shade could be spotted, this time applied to Transparent Brown (called Trans-Black on BrickLink... and they call Opalescence "Satin", just to confuse you further). Finally, now it is coming in a set. 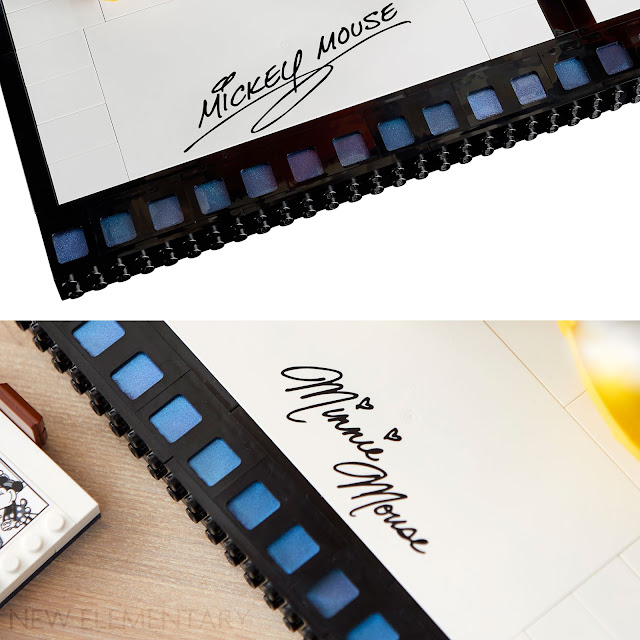 I'm assuming it is used for these window panes, embedded in the film sprockets on the stands. However it looks very blue in all the pictures, yet that is the only sparkly LEGO I can see. Perhaps there are blue bricks behind the panes affecting the hue, or perhaps these were cast in Transparent Blue Opal at the time the pictures were taken? As Ollie says, something is Transparent Brown Opal in this set so we will confirm when we have it! Until then...