For his next investigation of the LEGO® Plate, Modified 6 x 6 Hexagonal with Pin Hole (Design ID 27255), Brian D'Agostine (Dag) went back to basics to discover what happens when Nexogons are stacked.
For my third exploration I was curious about stacking pieces. Gary Davis had suggested the idea and shown a few neat stacking ideas but didn't take them further. My thought was to stack the 2x2 portions on top of each other to create a tighter pattern than some of Tim's initial offerings.

The idea first came from trying to get a sense of the geometry. In my first post I had used a 2x4 Technic plate to judge where the central hole was in relation to the sets of 2x2 studs. Doing this required a 2x2 plate to lift the Technic piece above the ridges and relief on the surface. The Technic plate later came off but I snapped another Nexogon on top of that 2x2. And then another. And another. Soon I had a tight little pyramid of sorts, all stacked up. 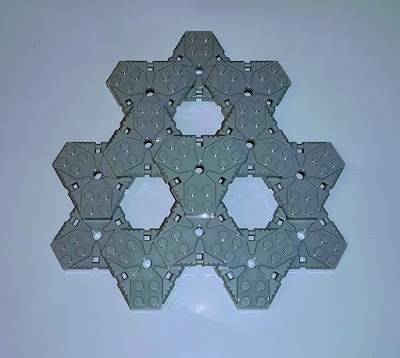 I attempted going out another ring and by this time I was starting to run short on Nexogons. I exchanged symmetry for something more like a MOC. The structure had grown weak and a few parts fell off. I used these chunks to create a new shape out of the pyramid. 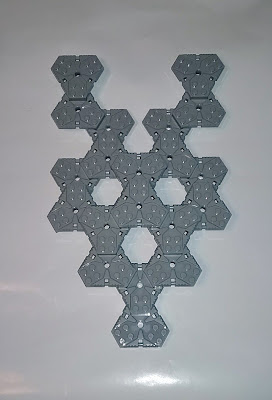 Before I knew it I seemed to have the basis for something similar to a Druidic mask. In fact, when I did a Google search to verify that that's what I really meant, the first images to come up were very reminiscent of what I had. (Whether or not the images are truly a Druidic mask or just fancy modern art, I've no idea). 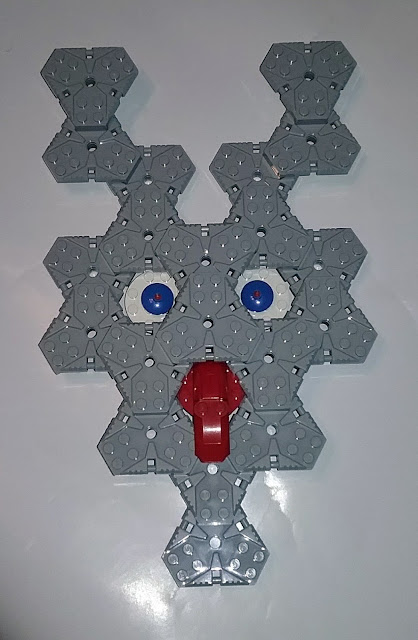 In the spirit of creating a MOC I then fleshed out the appearance. Filling the holes only required a 3x3 round LEGO piece, something that is rare in comparison to a 4x4 round plate. I opted for the larger piece to completely fill the hole. The fact that they are not perfectly centered gives it that much more realism to me. The uncenteredness was not completely random. It was the result of trying to use basic connection points on the back of the mask to secure the eyes in place. Note that the mouth and tongue are held in securely by friction, a geometry that might be worth more exploration. 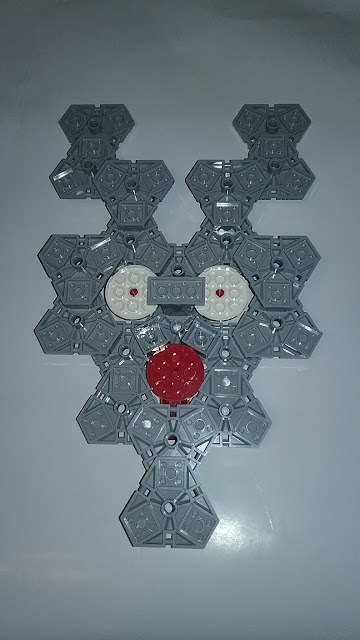 To complete this MOC might take a host of dark green leaves, reddish brown weapons for texture, or perhaps many wedges and spikes to make a leaf mask, bark mask, or stone mask respectively.


READ MORE: See Brian's "breathing ball" made of Nexogons
Do you like buying stuff? Do you like reading New Elementary? Please consider following our affiliate links before you buy your LEGO sets and bricks (or anything); any purchase you make will send a few pennies New Elementary's way and that is hugely appreciated.

Products mentioned in this post were kindly supplied by the LEGO Group. All content represents the opinions of New Elementary authors and not the LEGO Group.
Posted by: Admin Posted on 4/23/2017 09:39:00 am
Email ThisBlogThis!Share to TwitterShare to FacebookShare to Pinterest
Labels: Parts Festivals