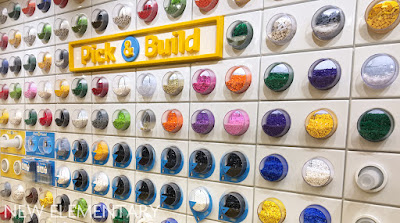 About a year ago, the company trialled a new idea: some buckets contained "Fan Favourites";  pieces and colours that AFOLs might want to see on the wall. The LEGO Community Engagement (LCE) AFOLs & Relations Program chose the elements based on their knowledge of the community and the trial ran in two American stores in New Jersey and Texas. It was a success and so this year, the LCE asked some AFOLs which parts they might like to see. Their colleagues in LEGO Brand Retail in the US will hopefully try to include some of the parts in North American stores in 2018. If this works out they may roll the scheme out to Europe and Asia in the future. (There is no word regarding the inclusion of LEGO Monobrand or Certified stores.)

So it is all a long time away and who knows it might not be practical to include all these, but nevertheless I thought it was interesting to see the colours and parts that were chosen. These are just the top ten; the full list given to Brand Retail contains 20 colours and 30 parts .

Here are the colours that LEGO fans said they'd like to see on PAB walls (Color ID – TLG name / BrickLink name where different). Click image for a larger version.

Here are the parts (regardless of colour) that LEGO fans said they'd like to see on PAB walls (Design ID – TLG name). I created the image using Mecabricks, choosing Dark Red for the colour given that it is the most popular one and all these parts do actually come in Dark Red!

What do you think?

So who chose these? The survey was executed via the LEGO Ambassador Network (the bridge between the company and adult fans). 42% of registered LEGO User Groups (RLUGs) in the Americas responded, as did 12% in EMEA/Pacific, 5% in Asia, and 20% of registered LEGO Fan Media.

I am interested to know what you think of the pieces chosen. Given that 1x2 bricks regularly appear on the walls anyway, I'd rather have seen more plates instead, especially longer ones. Foliage parts and profile bricks are good choices for bulk but I fear that foliage parts are a poor use of the space available in cups.

I'm surprised Dark Red was the most popular colour! Do you think we will get those rarer colours like Sand Green and Dark Orange? When it comes to bulk, I prefer neutral colours so am glad to at least see some browns and the greys on there. Notably, the chosen colours are very dark and subdued; they are not the 'normal' LEGO palette that the average customer would expect. But then, these Fan Favourites would probably only account for a few of the available buckets on a wall.

Personally, regardless of what comes of this initiative, I think it is a great example of the innovative and progressive ways in which the LEGO Group engages with the adult fans of its product. We get something out of it and the company gets something out of it. I can't imagine any other multinational toy company going to this sort of bother!