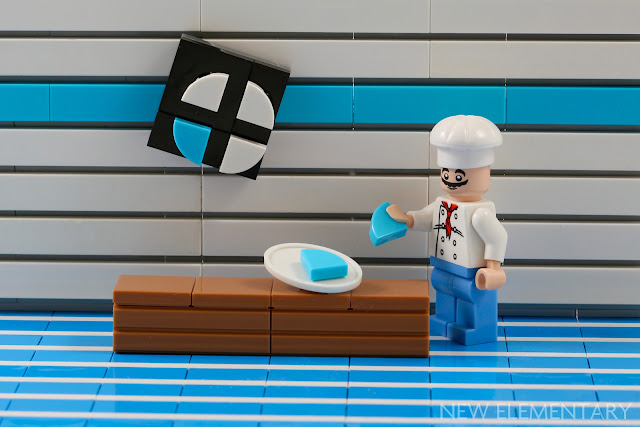 If I had been sensible and left them lying on my desk in a ‘to do’ position then all sorts of colours of quarter tile would have appeared, not to mention 2x2 and 4x4 curved tiles. At time of writing, there are six colours of 1/4 Circle Tile 1X1 available, not counting any printed versions such as watermelon, waffle or pizza slices.
The first idea that came to mind was the BMW logo with its blue and white centre. My initial attempt back last year became far more fiddly than I anticipated, due to the quarter tile only being available in Medium Azure at the time.

Then out came 21306 The Beatles Yellow Submarine and my little BMW logo solution no longer seemed so clever as I could simply place the alternate quarter tiles in position. 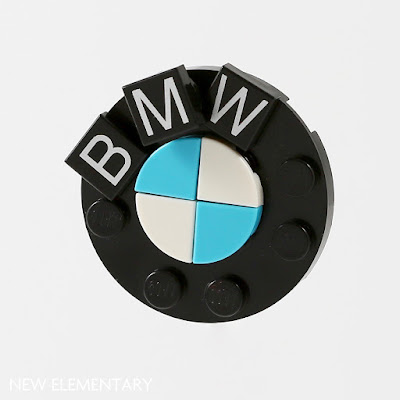 The other idea I had was to use the 1/4 Circle Tile 1X1 with other available Medium Azure tiles to add some curves to a simple ‘LEGO Tile Font’. What could be better than New Elementary tiled out in Medium Azure? Tiled writing is not really seen very often for the very reason that a lack of curves mean that brick-built words look better and are easier to read.


READ MORE: See ways that quarter tiles can be combined with the new macaroni tiles from Assembly Square
See what Chris McVeigh made with Medium Azure quarter tiles.