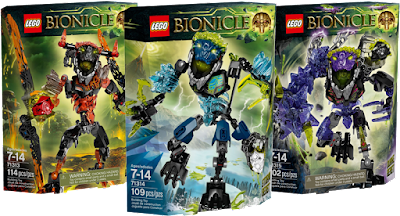 Love it or hate it, LEGO® BIONICLE holds a pivotal and remarkable place in the history of LEGO products. Since November 2014, New Elementary has been lucky enough to have the Barnick brothers writing superb, detailed analyses of selected sets and parts in the relaunched range. It may surprise some readers to hear that many of these posts are among the most popular in this site's history. Today, Andrew Barnick returns to examine some of the sets in what has now been confirmed as being the final wave of the reboot.

Hello, New Elementary readers! Today I’ll be reviewing three of the summer 2016 LEGO BIONICLE sets: 71313 Lava Beast, 71314 Storm Beast, and 71315 Quake Beast. I apologize for the lateness—this review is somewhat bittersweet for me, with the recent news that this latest wave of Bionicle will be the last one for the foreseeable future. But I would be remiss to let the theme go without offering New Elementary’s audience an assessment of some of these final sets and the unique parts and recolors they contain. Without further ado, it’s time to look at what new elements they have to offer.

The vivid colors of these masks are a big change from the neutral-colored masks on last year’s villains, and are certainly attractive, but also limit their reusability somewhat compared to those earlier masks. Last year, there was no villain set specifically designed to face off against Gali, Master of Water, but I was able to MOC my own villain design with Trans. Blue shells and one of those same neutral-colored masks. This year a full half of the Toa get no dedicated foe, but it will be much harder to create custom elemental foes for them considering that the shared mask piece of this year’s villains is only available in three far more elementally-specific colors.

In terms of its shape, this mask design is quite different from other masks in the theme up until now. The asymmetrical crystalline mask only covers the top half of the head piece, and the eye holes are spaced farther apart. To compensate for those wider eyes, the entire head piece (Design ID 19049 | Element ID 6145450) is molded in Trans. Fluor. Green for the first time. 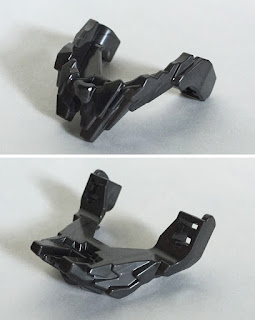 Unlike most Bionicle sets, however, these beasts’ faces are composed of more than just masks. Each beast also comes with a new Titanium Metallic jaw piece (Design ID 25528 | Element ID 6150531), which matches the crystalline texture of the beast heads and attaches to the axle holding their eyestalk in place with Technic connectors. This connection allows the mask to be dislodged in two ways—by hitting the eyestalk, as with all previous sets, or with an uppercut motion to the jaw. However, I don’t know how appropriate I’d consider that functionality—not only is it odd to see the beast’s masks (which make up the upper half of their face) removed while their jaws remain in place, but all of the Toa this year have horizontal waist rotation as their primary action feature, with no way to deliver an effective upward blow. Ultimately, I think I might have preferred if the new beast masks had been designed so that the eyestalk did not actually dislodge the mask, since that way it could be used instead to simply to give the beasts an added “chomping” feature.

Like most of the new Bionicle sets, each of the beasts includes a bonus mask—in this case, corrupted versions of the 2016 Toa’s new unity masks, each blended with Trans. Fluor. Green. These masks definitely have a unique look to them, though unfortunately, they can’t actually be worn by the beasts due to the jaw construction.

Because these three Toa were not reviewed for New Elementary this year, I’d like to take a moment to look at each of these masks in detail and compare them to the non-corrupted versions from the Toa sets themselves.

This mask is smaller and more streamlined than Tahu’s mask from last year but still echoes its defining motifs like the large arching “mouth” and vents on the cheeks, and like the other Unity Masks includes a square “Nuva symbol” representing its wearer, originally used to promote 2002’s Tahu Nuva. The Corrupted Unity Mask of Fire (Element ID 6158055) is Bright Red blended with Trans. Fluor. Green, and I’d consider it the best-looking corrupted mask due to its vivid color. Unlike the other corrupted masks, you can also draw a direct comparison between this mask and a mask from the classic theme—the Poisoned Hau Nuva from 2003, which was blended with Dark Green [TLG]/Green [BL] and came in several distinct varieties as a promotional giveaway.

This mask updated the look of Kopaka’s mask from last year with Kopaka’s “Nuva Symbol” on his left brow and a new scope design over his right eye, which in that set used a standard Trans. Light Blue 1x1 round plate as a lens. The Corrupted Unity Mask of Ice (Element ID 6158189), which is White blended with Trans. Fluor. Green, does not include such a lens, but you could still attach one in any color you wanted if you so chose.

This version of the mask has a rounder, bulkier appearance than Onua’s mask from last year and includes Onua’s “Nuva symbol” over his right brow. The Corrupted Unity Mask of Earth (Element ID 6158054) is Black blended with Trans. Fluor. Green and looks neat, if less vivid than the other two more brightly-colored corrupted masks.

Continuing the crystal motif present on many of this year’s sets, the summer sets introduce a new crystal shell (Design ID 25534) in multiple colors. 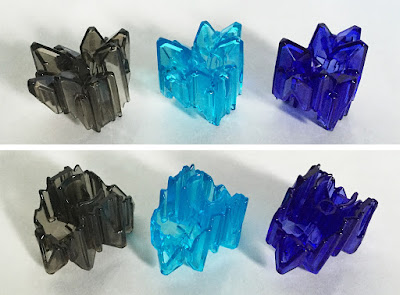 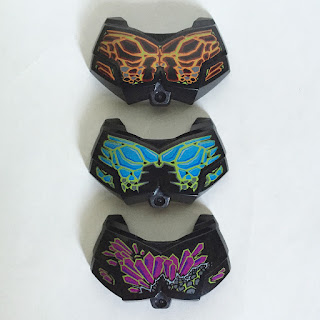 New and rare parts, by set 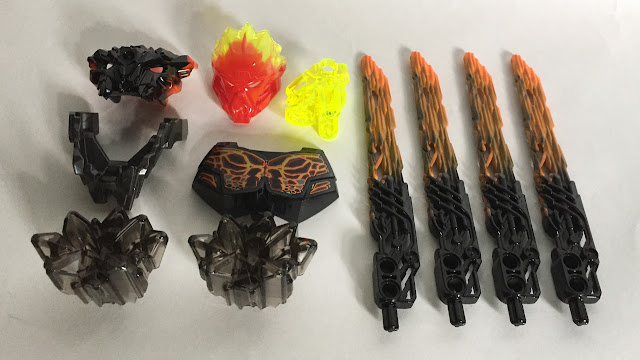 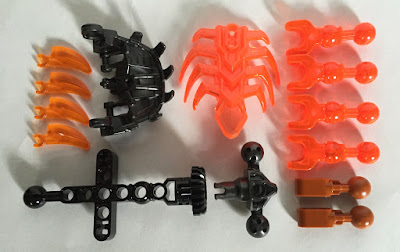 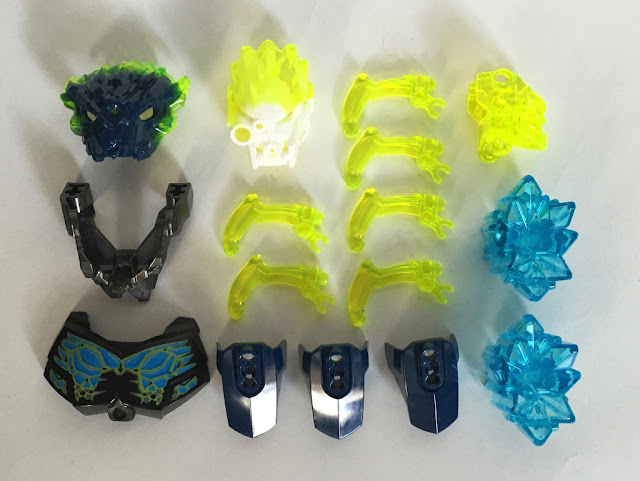 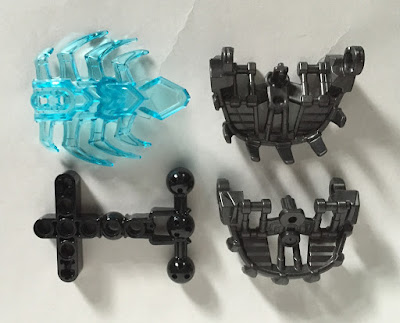 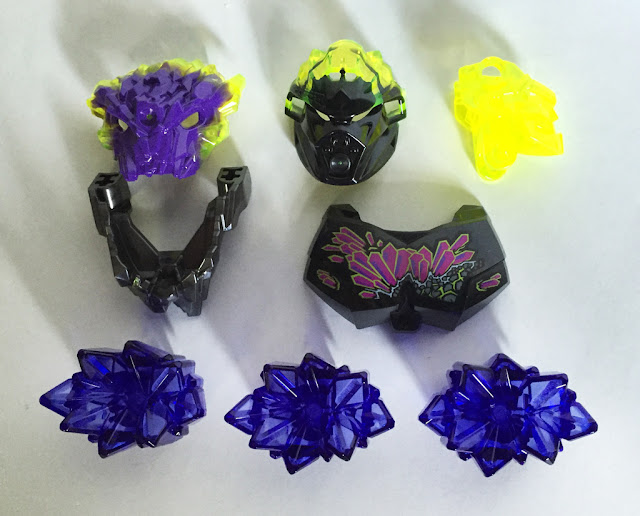 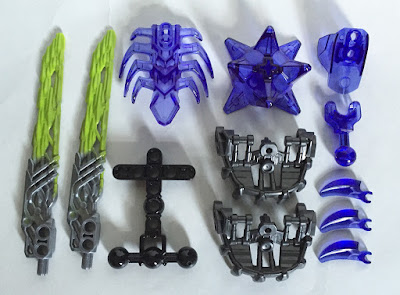 
I’d consider Lava Beast to be the least interesting of the new Beasts in terms of its build and function. It shares the torso rotation function used on many of this year’s sets, and additionally has scissor-like “wings” on each wrist that can be spread open by turning gears attached to the recolored crystal blade pieces. It’s effective, but far from the most dynamic or complex function. 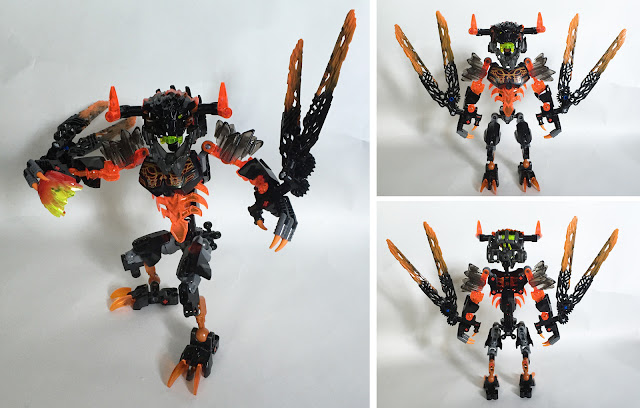 Beyond that, Lava Beast has interesting hands made from click hinges and a very posable neck build, but its lower leg build is dubious at best and most of the rest of its build is bog-standard. Lava Beast’s overall color scheme is mostly solid from the knees up, but the use of two additional shades of orange (Dark Orange for the lower legs and Trans. Bright Orange for its toes) is less effective, and unlike the other Beasts, it makes little use of Trans. Fluor. Green accents except for its head and eye color.

Storm Beast is my favorite of these three Beast sets. Not only is its color scheme eye-popping (Trans. Light Blue, Earth Blue, and Trans. Fluor. Green), but it has a completely custom function that is very effective. 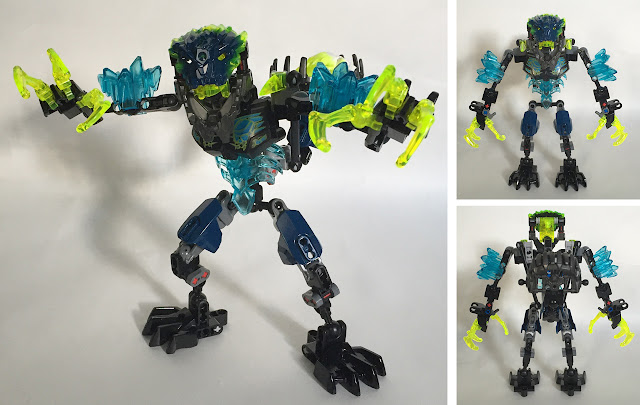 Storm Beast’s arms are controlled via its tail. By moving the tail down, both arms are raised. Swinging the tail side to side raises both arms in alternation. The Technic assembly that allows for this may not be the prettiest but it works amazingly well, and the visual flair of the rest of the set more than makes up any clunkiness on the back. Storm Beast also has very neat custom claws, though they come at the expense of actual articulated wrists. The custom leg build is decent if not exceptional, and the tail is capped off with a Shadow Trap (though this trap lacks the click hinge that gave the individual Shadow Traps from the Creature sets such a snappy and secure grip).

Quake Beast is a very visually impressive set, but while his function is dynamic, it’s not the most effective. Quake Beast uses the gearbox piece from last year’s Toa but uniquely attaches it to the torso sideways, allowing its massive crystal arm to deliver a solid right hook. But unfortunately, there’s nothing there to prevent that arm from rotating too far, and the bulky crystal attachment on the shoulder smashes directly into the side of Quake Beast’s face when the function is overextended. That drawback undermines what would otherwise be a very physically intimidating function. 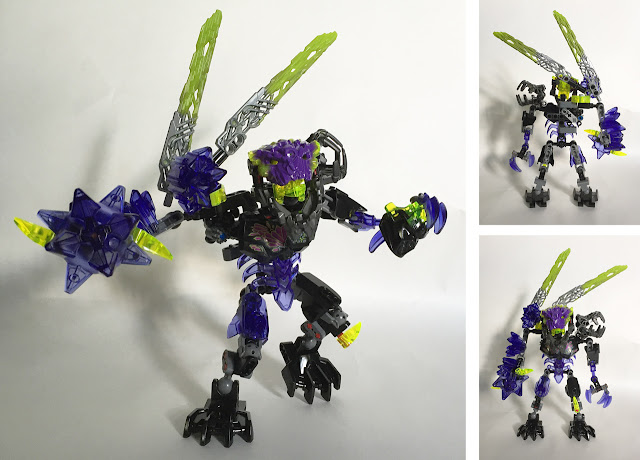 While the function is a letdown, Quake Beast is still a very visually appealing set, with a solid color scheme (Trans. Bright Bluish Violet, Trans. Fluor. Green, and Black). The Medium Lilac mask is not a perfect match for the transparent colors elsewhere in the build but I find it serviceable. The crystal right arm features a massive spiked club with spinning Trans. Fluor. Green spikes, though there’s no way to spin them other than physically manipulating the spikes themselves (a spinning function attached to a longer axle might have been preferable). The crystal blades and spikes on the shoulder also look great even if they have a negative impact on the set’s function. The smaller left arm is paltry but has a nice claw and contributes to the asymmetric design of the set (as does the Shadow Trap on the left shoulder, which like the one in Storm Beast suffers from the lack of a click hinge). Finally, the short custom leg build, while a minor feature, does help to give this Earth-aligned set that classic dwarfish tunnel-dweller vibe.


I’ve seen a lot of negativity about these Beast sets. This seems to be a bit of a trend with Bionicle, which tends to get more weird and experimental with its monstrous villains at the expense of the solid, well-covered builds typical for more heroic sets. Ultimately, however, I do enjoy these sets for what they are. 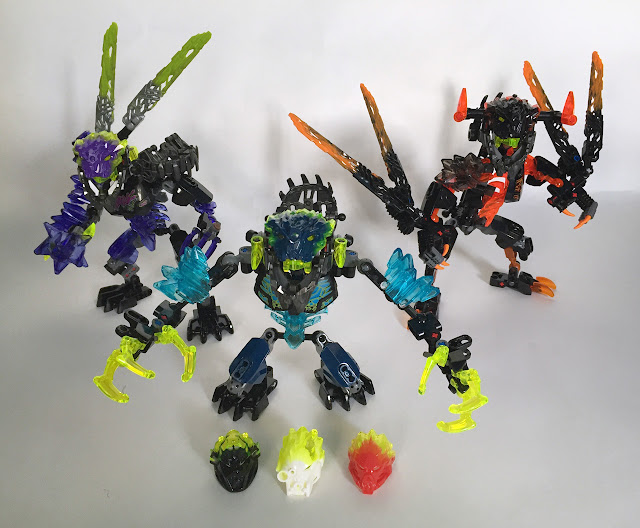 They have very unique looks and functions, which, while not all consistently effective, offer fantastic variety. As for their parts selection, while I do think last year’s villain sets offered a better spread of new parts with slightly more versatility, these Beast sets still hold their own, including their fair share of interesting new molds and recolors as well as a few very useful rare parts. All in all, while I would not consider these sets as essential as the Creatures and Toa from earlier this year, they’re still a great choice for constraction fans looking to expand their selection of parts, or Bionicle fans who want to bring their 2016 collection to completion.