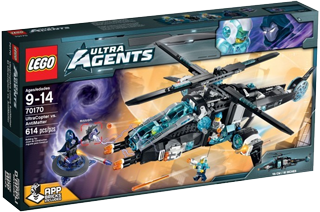 Ultra Agents has proven to be a popular and exciting LEGO® theme, and in advance of the new summer sets hitting stores Jeremy Williams (Bricking It) takes a look at one of the currently-available winter sets: 70170 UltraCopter vs. AntiMatter.

My 'eighties childhood was marked (as I’m sure everyone’s is) with some key contests: which is better? Dallas or Dynasty? BA or Murdoch? Neighbours or Home and Away? Blue Thunder or Airwolf? I had answers to all these questions, and (as you’ve probably guessed by now) also had the sallow skin and weak eyes of an indoors, trash-TV addict. And in the case of the latter question, it was Airwolf all the way.

Which is why I am irresistibly drawn to the Ultracopter. In my mind, it lives inside a dormant volcano, ready to unleash terror on any would-be villains. The Ultra Agents playtheme is already a firm favourite, but this has to be the standout set of the range. Bristling with weaponry and oozing with style, I couldn’t wait to get started.

But this is New Elementary, where the exotic new element is king, and 70170 contains a number of unique elements. While some are recolours, there are some great new parts, most of which belong to the villain AntiMatter. 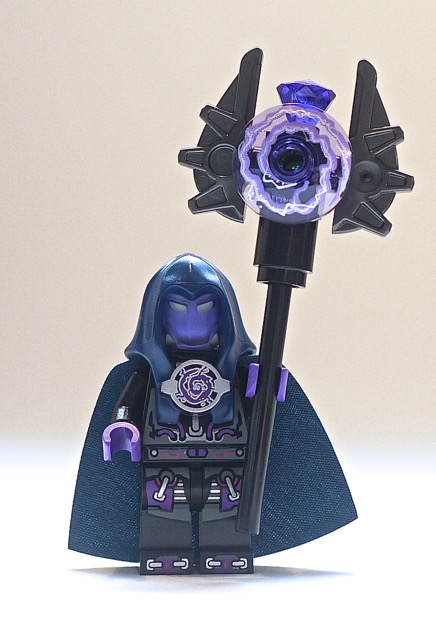 Here he is in all his malevolent glory. His ‘glow in the dark’ head is featureless, but when that wonderful mask (Design ID 20265 | Element ID 6104171) is added, the eye-holes are highly effective. His staff (anyone noticed that almost every warrior, from Chima to Ninjago, sports a staff too large and heavy to be practical?) comes with two exclusive and one nearly exclusive elements. The former are a 2x2 dish (Design ID 20268 | Element ID 6104175) - this, along with a 4x4 twin (Design ID 20540 | Element ID 6106812), are patterned with AntiMatter’s swirly forcefield pattern - and a new part which is a curved, serrated blade (Design ID 19179 | Element ID 6103924). The latter is a 1x1 green tile with a computer chip pattern (Design ID 18512 | Element ID 6083816) - happily, the set comes with a spare copy. Furthermore, AntiMatter’s whirlwind hover-board also contains a new element - a craggy moonstone tip (Design ID 10178 | Element ID 6101100) - and two familiar dishes in new colours. I can’t remember the last time I saw such a distinctive minifigure (especially if you ignore the licenced playthemes). 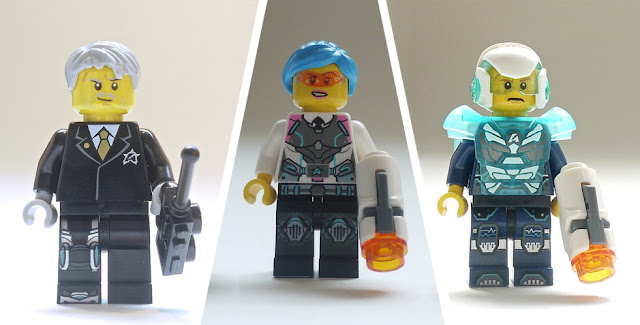 Two of the heroic agents sent to neutralise AntiMatter are fairly run-of-the-mill by comparison (the smart-suited Solomon Blaze and Wyldstyle-wannabe Caila Phoenix), but then we get to Max Burns and that helmet (Design ID 19023 | Element ID 6097145). Oh, ye gods, that helmet! Verily could I weep with joy for this Tron-inspired design; it’s simply stunning and is instantly my favourite minifig headgear of all time. I predict that were an enlightened government to provide a full-sized one for every citizen, war and famine would instantly cease. It’s frankly too good for Ultra Agents - I’m already envisaging a Neo Classic Space control room with a row of white-suited spacemen sporting this very visor. 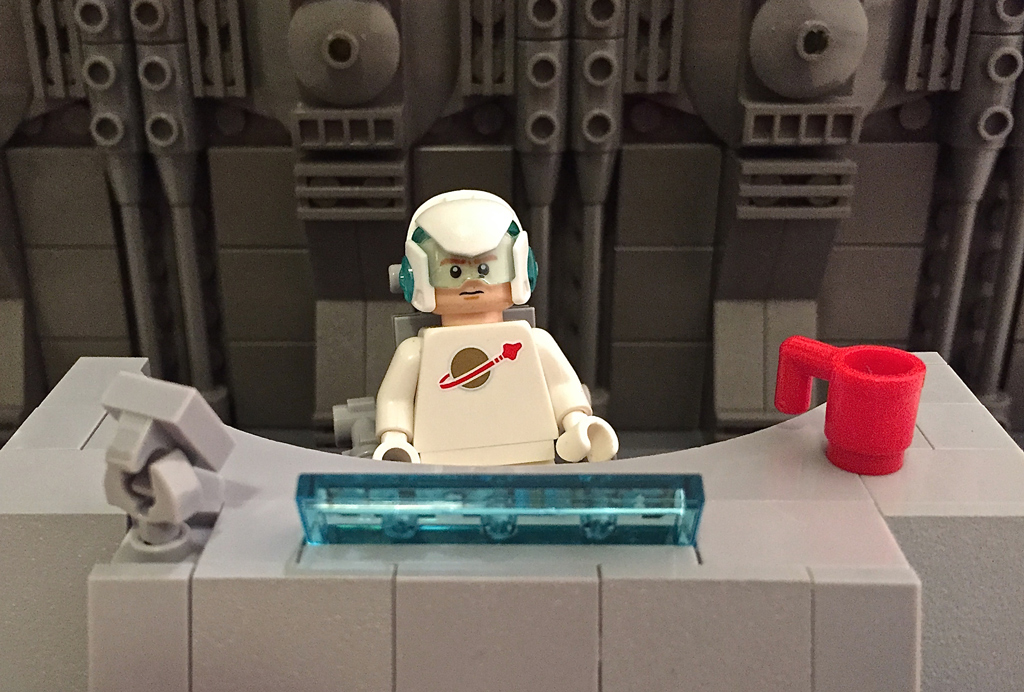 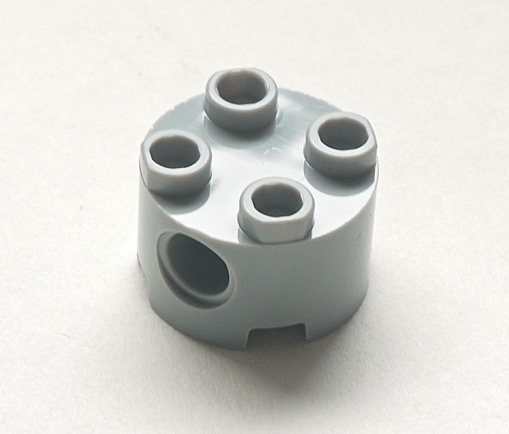 Most of the other new elements are recolours (e.g. a jumper plate in Medium Lilac [TLG] / Dark Purple [BL]; some more are shown in the table below) but there are one or two interesting and fairly rare parts that excited me. One such is the 2x2 round brick with hole (Design ID 17485 | Element ID 6078985); introduced this year, it’s in two other sets in yellow but uniquely here in Medium Stone Grey [TLG] / Light Bluish Gray [BL]. We also have the relatively new idler gear (Design ID 18946 | Element ID 6100930) in Bright Red [TLG]/Red [BL], which only appears elsewhere in two Technic sets. Ryan W. covered it thoroughly in his review of new Technic parts earlier this year. 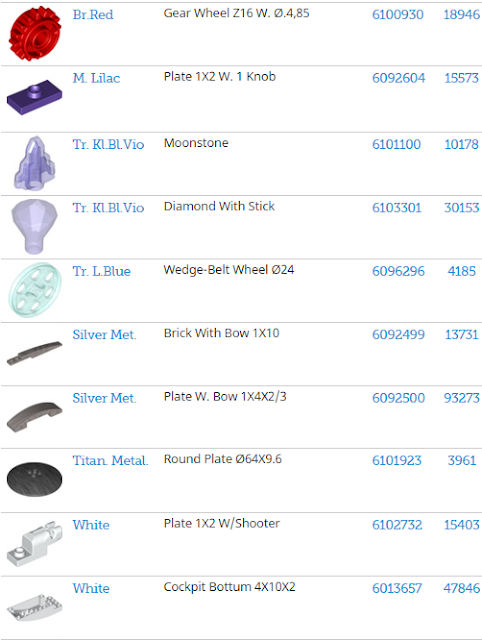 Now onto the feature element (across the 2015 Ultra Agents range) shown here on the left: the "App Brick" (Design ID 15411 | Element ID 6103777). This oddity is in essence a 1x1 brick with two side studs - except that one of the ‘studs’ is instead an intersected circle (a bit like a laptop power button). Colour enthusiasts will be excited that this part has been deemed an entirely new colour by TLG: Conductive Black. (BrickLink just call it Black.) 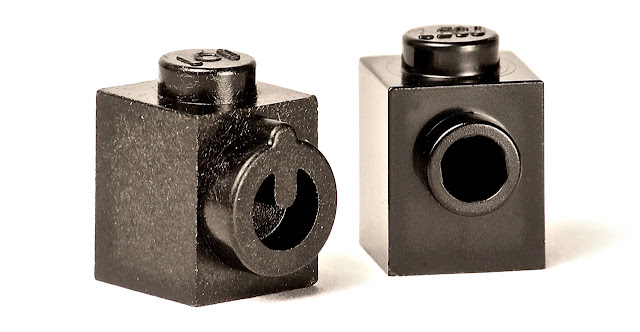 The brick is made of conductive material (“carbon-infused”, according to TLG) and the bricks can - in the right configuration - be placed on a tablet screen and moved to interact with the Ultra Agents app (for both iOS and Android). Each App Brick-enabled set contains a certain number of App Bricks - four in this case - and instructions for a simple model containing these in a particular layout which the app will then ‘recognise’. I duly downloaded the app to my iPad and it works after a fashion - you need to ensure you touch each of the four bricks and keep them on the surface of the tablet, and can then twist and spin the model to interact with the Ultra Agents comic.

And after all this, let’s get onto the main model: the Ultracopter. It’s pretty straightforward to build, involving five numbered bags. There’s some Technic involved towards the end when it’s time to add the rotors, as one might expect, but nothing too troublesome. I’ll break down the final verdict into style and playability. 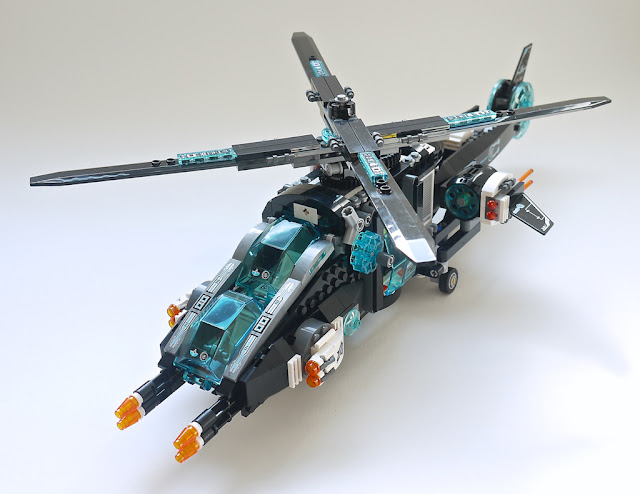 In terms of style, this is one lovely set to look at from most angles. Brackets and SNOT bricks feature heavily (as is usual these days) to enable some imaginative shaping, and the use of the repeated windscreen works to tie the set together. The stickers are fairly discreet and effective, and there’s some subtle but nice design touches: for example, two Mixel towball sockets are used as side exhausts whilst also serving a function to keep the sliding mechanism (see below) in place. The fantail is classy and the tail tapers beautifully. The twin cockpits are also nicely finished (an often overlooked point).

On to playability, where the set similarly shines. Despite the fact that there are clearly two separate sets of rotors rather than a single four-rotor set, I honestly hadn’t really expected contra-rotating rotors until the mechanism was complete, and this works extremely well (one rotor is a little faster than the other, but this is a minor issue). It would have been lovely for the fantail to turn as well - this was perhaps too much to hope for.

There’s also a zipline which features a pawl mechanism acting as a ratchet to prevent the line from slipping unless the pawl (a Technic connector) is held out of the way of the gear. I didn’t expect this level of sophistication, and it’s a great feature. The set also shares a play feature with 70816 Benny's Spaceship

- a sliding mechanism that pushes two wings, loaded with spring shooters, out and ready for combat. In addition, two click-rotating turntables each loaded with two of the new plate-shooters adds further armament. Perhaps the only misfire is the side hatches - these look great when closed, but if opened, they reveal the inner Technic beams rather than oodles of storage space. Helicopters and LEGO go back a long way, and as well as a ton of City-based small examples and the occasional Technic set, the LEGO Group have ventured into fantasy 'copters a number of times, among them some greats (2014 saw both 70724 NinjaCopter

, for example). Does the Ultracopter live up to its class-leading moniker? Emphatically yes. It’s a clever and beautiful design, packed with playability features, a couple of wonderful minifigures (did I mention one had a superb helmet?) and some great new elements. Blue Thunder and Airwolf may have their work cut out…