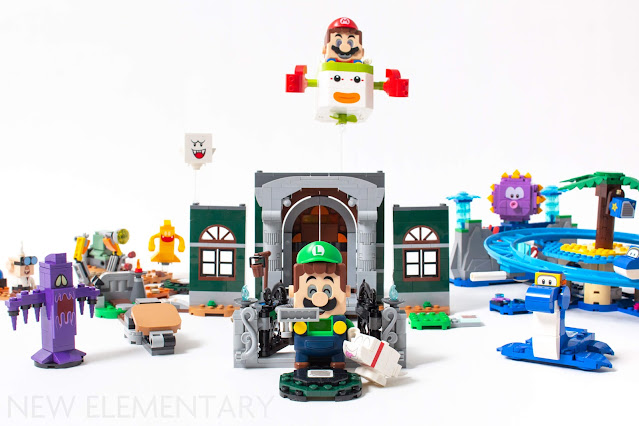 Mario is finally sharing the spotlight of the LEGO® Super Mario theme with his brother Luigi. Today we’re reviewing two Luigi’s Mansion™ sets, three other Super Mario sets, and the Series 4 Character Packs. There’s new gameplay elements, familiar faces from every era of Mario, and ghost hunting. The new parts introduced have already been examined, so let’s jump into the full sets!

This wave of Super Mario sets includes no outright Power-Up Packs but 71396 Bowser Jr.’s Clown Car fills that niche. The £8.99 / $9.99 / 9.99€ Clown Car is priced similarly to Power-Up suits and is entirely brick-built meaning the 84 pieces here can be repurposed more easily than a Penguin suit or a Tanooki hat. The design features a smart and simple sliding floor segment which allows the Lime propeller to retract into the car and sit flat when set down. An ordinary Bob-omb enemy is included for some extra value. 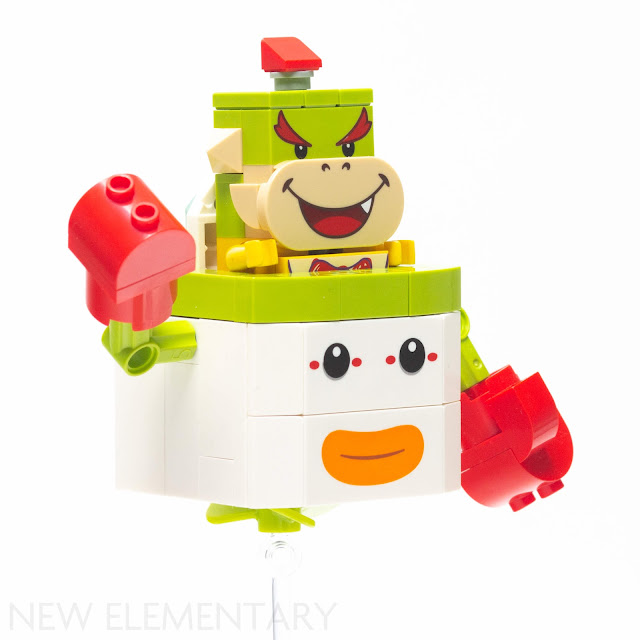 The Koopa Clown Car has long been a part of Super Mario lore and was first piloted by King Bowser in 1990’s Super Mario World. This set’s name - Bowser Jr.’s Clown Car - implies this smaller version is suitable for King Koopa’s kids… or carjacking plumbers. Four-module-wide enemies like Bowser Jr. himself fit in the cup-shaped copter which makes this set a power-up for either the player or their enemies. 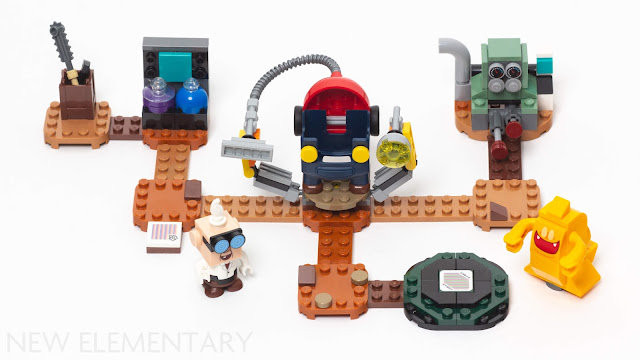 One new suit does show up in this wave even without Power-Up Packs: the Poltergust, Luigi’s primary weapon against the ghosts haunting Luigi’s Mansion. In Professor E. Gadd’s lab, Luigi can equip this Ghostbusters-esque backpack vacuum to defeat ghosts and collect coins - without the Poltergust activated via an overalls-mounted button, Luigi can’t end his ecto-enemies. This 179-piece set includes a new Luigi’s Mansion START tile which extends the course timer to 90 seconds and cues Luigi’s Mansion music rather than the normal Mario overworld theme. A Gold Ghost, a few hidden coins, and an interaction with Elvin Gadd are sprinkled throughout the lab, but overall the £21.99 / $29.99 / 24.99€ set is straightforward in adding gameplay elements with few extras.

A button on the front of the new overalls is a first for the Super Mario theme and could be utilized in future suits. Luigi’s Mansion debuted on the Nintendo GameCube and less than a year later Super Mario Sunshine appeared on the same console. Both games give each brother an all-important backpack device, so this style of power-up may be seen again soon as Mario’s water-shooting F.L.U.D.D. in hypothetical Sunshine sets.

In our inspection of new parts found in this wave, almost every new mould appears in 71397 Lab and Poltergust and I’m most excited about the rounded Poltergust backpack (84866). It’s not too specialized and hosts several connection points, all of which I was intent on using for the head of my below Rex MOC. Rexes (from Super Mario World) are usually purple, but a little palette swap won’t dull this dinosaur’s teeth. 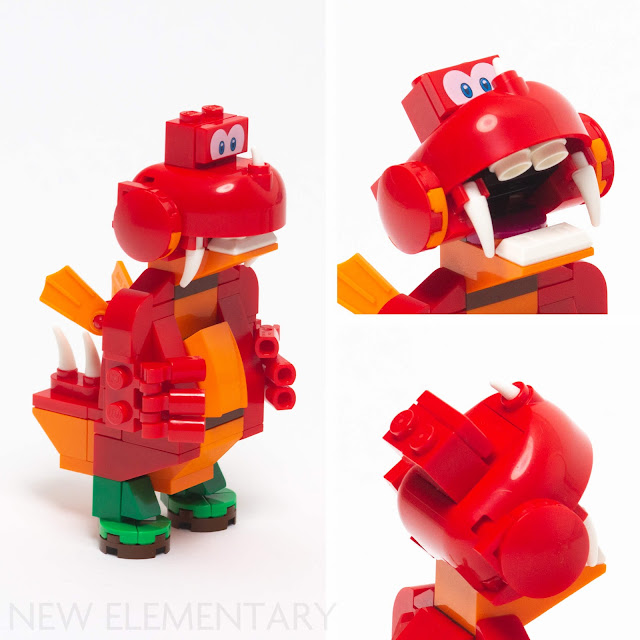 Adding a hinge inside of the backpack piece took the most planning, but the stud-diameter through hole for removing the top tile provided a solution. A 2 x 2 jumper’s stud placed in that hole added anti-studs to the inside of the backpack. This allows a clip-and-bar hinge for the jaw and more plates to loosely secure the small barb poking through the top-front hole. 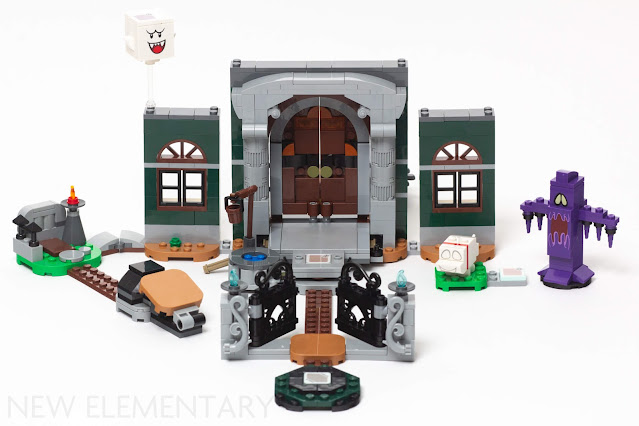 Continuing on with Mansion sets, 71399 Entryway adds walls and an intriguing door mechanism to Luigi’s house of horrors. The colour scheme, ornate details, and mechanical workings of this set make it my favourite of this wave - plus the ghost dog Polterpup is an adorable companion. At £34.99 / $39.99 / 39.99€ and 504 pieces, this set offers the lowest price per piece (6.9p/ 7.9¢ per part) of this wave and I dig the 57 Earth Green/ Dark Green bricks included. It’s not a rare colour but it is one of my favourites.

The main module’s arched French doors open one of two ways: pushing the exterior’s front light grey landing or spinning the interior’s dark grey splat gear. A keyhole-adorned scanner tile on each prompts voiceover from the legendary actor Charles Martinet: “...Hello? BWAAHHH!” The touchless opening mechanism is fun but the doors themselves have a messy front design. The in-game design's scrollwork didn’t translate well to the Entryway’s doors, despite the set including curvy (but thick) pieces on the front gate. Stickers could have been another solution but the Super Mario theme remains stickerless. 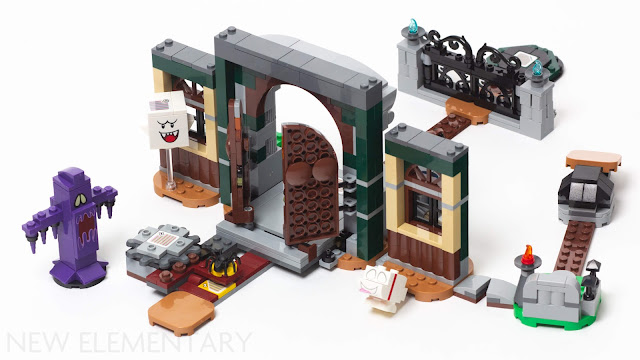 The graveyard spirit Bogmire and Boo give Luigi two more ghosts to suck up. The small cemetery home of purple Bogmire includes a tile slammer which launches a black brick-built shell toward any ghost in the way, and frenemy Polterpup can be given a hidden bone for a pile of extra coins. Balance in all things, right? With the dark Luigi’s Mansion half of this wave covered, it’s time to pivot into the brighter seaside Super Mario sets making up the rest of this January 2022 wave. These beach sets are bordering on Super Mario Sunshine territory, so I’m holding my breath for a deeper watery dive soon.

The first wave-maker is Dorrie, introduced in Super Mario 64, and the rest of 71398 Dorrie’s Beachfront. This £24.99 / $29.99 / 29.99€ set includes 229 pieces which makes it relatively expensive per part compared to most of this wave. Dorrie is rideable much like the Clown Car above and features the same music but with water splashes and squeaky dolphin-like noises.

The set features seven small modules whose main gimmick is a series of three numbered Bright Reddish Violet/ Magenta bricks. The player can earn a pile of coins by collecting all three. The first is uncovered by breaking a sand castle (my favourite module here), the second by striking a stony reef, and the third shakes loose from a tilting palm tree. The red Huckit crab is subject to the same shell-slamming strikes seen in Luigi’s Mansion Entryway, this time with a bona fide shell piece.

The same sand-and-surf style seen in Dorrie’s Beachfront is scaled up in 71400 Big Urchin Ride. Familiar landscaping cues are apparent in the water jets behind Big Urchin’s reef and a power-up can be shaken free from a palm tree built in the same style as on Dorrie’s Beachfront. At the higher price of £54.99 / $59.99 / 59.99€, Big Urchin Ride receives a few larger modules including the namesake center coaster track.

The track’s car is built up into a Dolphin which tilts and spins around a palm tree. The Dolphin has a different musical track than Dorrie or the Clown Car, and the palm tree is jostled by the track’s movements and will eventually drop a Super Star power-up. That Star is the only way I’ve found to defeat the spiky Big Urchin, a scaled-up version of the pufferfish-like character seen in Super Mario Character Packs 1. Big Urchin sits atop a reef made using new Medium Stone Grey/ Light Bluish Gray rock panels (47849 | 6330090) and can be knocked off by passersby on the new Dark Azure coaster track (25061 | 6381920). 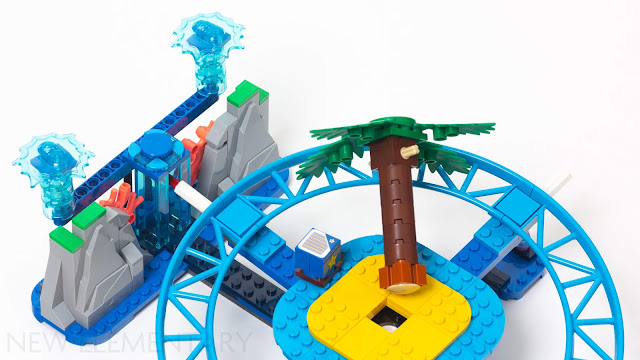 As much as I thought I’d be obsessed with the train track module, I’m in love with some of the smaller mechanical modules in this set. Below on the left Luigi crosses a bridge infested by Cheep Cheeps. This bridge’s middle planks can be pressed down to send flying fish in an overhead arc and a slick use of one Sand Yellow/ Dark Tan Window 1 x 2 x 2 Castle (90195) per side restricts the inner workings’ movement as intended.

On the right, Mario steps out on a diving board powered by a flexible rubber Technic connector (45590). This board has a scanner code at its end prompting some springy noises and a big splash when landing on a blue surface. Landing on yellow or green surfaces (sand or grass) elicits a big “Oof!” from Mario after his high dive.

The blind bag character packs certainly aren’t short of Mario characters yet. An era-spanning collection of enemies are here from the arcade days (Freezie) all the way to relatively new characters like Goombrat. Two Nintendo 64 characters appear from levels included in 71395 Super Mario 64 Question Mark Block, the first of whom is the imposing horned Bully from Lethal Lava Trouble. Every character is a solid representation of their on-screen counterparts and they play their roles well. The Freezie has a unique scanner code which frosts over Mario’s belly screen and the Bully awards three coins, all others are standard enemies who drop one coin when stomped.

The second N64 character is instantly recognizable: the Baby Penguin. The Super Mario 64 level Cold, Cold Mountain introduced us to this tuxedoed tyke and their incessant crying which won’t stop until reuniting them with Mother Penguin… assuming you’ve got her Baby Penguin, Tuxie. This character breaks the Character Pack mold by including its scanner code on the stand like allies Yoshi and Professor E. Gadd. Scanning it elicits the baby’s recognizable car-alarm like cry and gives Mario a handful of coins. As friendly as the Penguins are, horrible people like me can’t be stopped from dropping this kid off the cold, cold cliffs.

As with the rest of the characters, Coin Coffer is quite blocky. The blobby purse shape didn’t translate to bricks in this scale well but the use of the grooves in 1 x 3 jumper plates to create some shaping of the lips is appreciated. The Mechakoopa is the eldest of these five as it hails from the first fight against Bowser’s Clown Car on the Super Nintendo/ Super Famicon, making it suitable to debut alongside 71396 Bowser Jr.’s Clown Car.

This wave is after my own heart by working with the (slightly!) darker side of Super Mario. Now that LEGO Super Mario has ventured into spin-off games with Luigi’s Mansion, which game are you hoping to be brickerized next? Are you looking forward to busting ghosts with Luigi? If you’re adding Luigi’s Mansion or other sets to your collection, please consider using our affiliate links as New Elementary may get a commission: UK LEGO Shop (EU: select Change Region) | USA LEGO Shop | Australia LEGO Shop.

I'll be reviewing the remaining Super Mario product from this wave, 71401 Luigi’s Mansion Haunt-and-Seek Expansion Set, in a month or two.

Posted by: Admin Posted on 1/20/2022 10:06:00 am
Email ThisBlogThis!Share to TwitterShare to FacebookShare to Pinterest
Labels: MOC, Set review, Super Mario