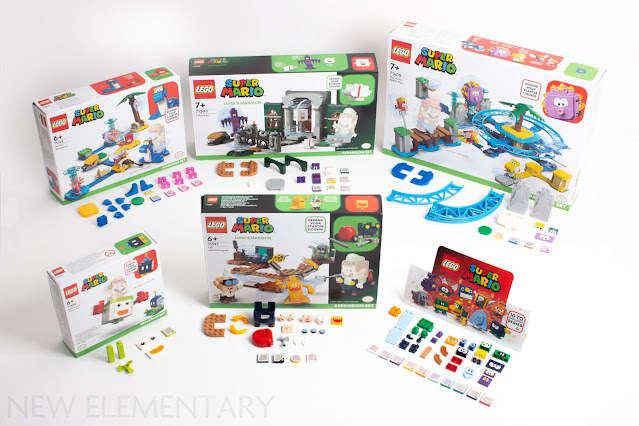 The LEGO® Super Mario theme shows no signs of slowing down with a new wave of sets arriving in  January 2022, bringing with it useful new elements, recolours of old favourite parts, and ghostly sets celebrating Luigi’s contributions to the Mario franchise. New E has five sets from the new wave and the whole collection of Series 4 Character Packs - today we’re inspecting every new LEGO piece to be introduced on 1 January. Let’s-a go!

The only set we’re not analyzing is 71401 Luigi’s Mansion™ Haunt-and-Seek Expansion Set, but there’s no shortage of new parts in the rest of this release. Apart from the satisfying spookiness Luigi’s Mansion sets bring, this wave features six new moulds and over two dozen recoloured elements. Mama mia, that’s a lot of parts!

Two blue rounded 4 x 6 plates come in 71400 Big Urchin Beach Ride. This part is almost a POOP: it could be three stacked 18980 Plate, Round Corner 2 x 6 Double with two modules lopped off the lower far end. 71397 Lab and Poltergust and 71399 Entryway come with one and two each respectively of these new 4 x 6 plates in Medium Nougat.

The Poltergust set also features new overalls with a pressable front button to activate the vacuum powers of the Poltergust, its body formed by the new rounded red backpack brick. This curvy backpack piece fits LEGO curves of one- and two-module radii and offers several various connection points across its five studs and two pin holes. This piece does a perfect job of representing its subject material - Luigi’s wheeled backpack vacuum - while being generic enough to find a home in countless other usages… I’ll be using this in a MOC in the near future, for sure!

That handy new grey handle and new BLO arms are exclusive to the Poltergust set as well. The new arms are longer than Arm and Hand Long with Technic Pin (66788) which may need to be renamed to 'Arm and Hand Medium' now. This new iteration is unusual with horizontal grips which can clip bars but won't clutch studs, unlike Mario and Luigi's hands which do both.

Five of this wave’s six new moulds appear in 71397 Lab and Poltergust, the one exception being the new 2 x 2 feet plate (84867). There’s one in 71399 Entryway in white as the feet of ghost dog Polterpup and one in orange as the feet of Scaredy Rat from the Series 4 character pack. I’m partial to four-legged friends, but I already love this part more than other Mario feet. 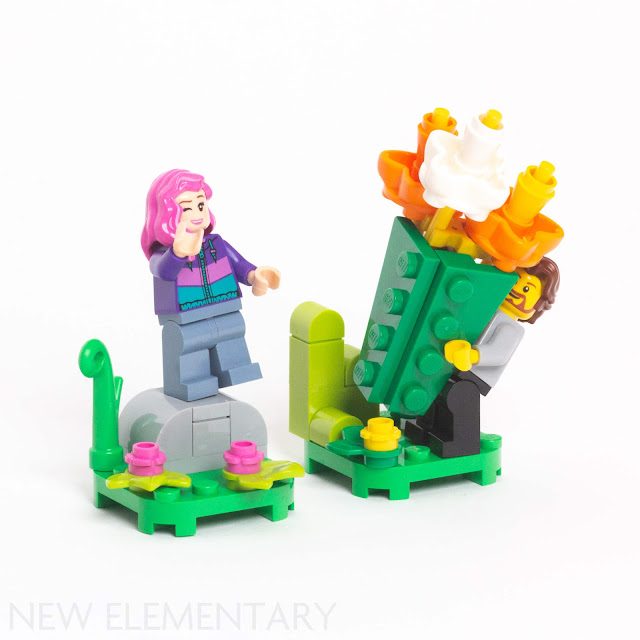 For starters, it’s radially symmetrical and less shoe-shaped than other shoe plates (66858, 79750, 66859) which makes it fitting for uses less anatomical and more botanical. I’ve re-purposed these feet plates as a jumbo bouquet for my boo, but they’d be equally at home in an ornate pillar or as a microscale space shuttle’s engine connector. Best of all, this part doesn’t have oversized toes that extend into adjacent studs’ space like other Mario feet plate do. This means every stud right next to a four-footed plate can be used, something that can’t be said for earlier Super Mario leg plates.

Several new parts come in new shades of blue, green, and more in the 2022 Super Mario sets. The dark green arches are new in this specific mould but appeared just once earlier in Toy Story 3 7596 Trash Compactor Escape with a different underside. The grey 4 x 4 rounded tile isn’t strictly new as it appears in the new Star Wars UCS 75313 AT-AT, but this is the first time we’ve seen it at New E. 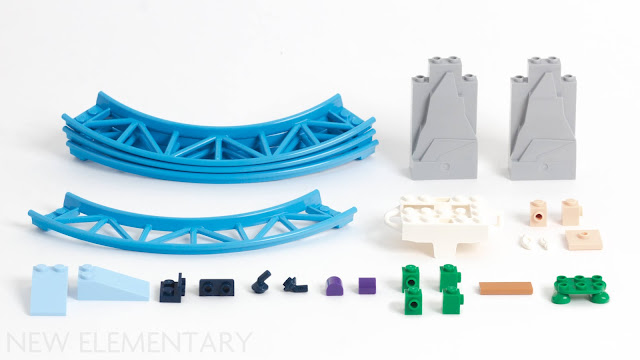 The rock panels in LBG aren’t strictly new either as they appeared in 43187 Rapunzel’s Tower, but 71400 Big Urchin Beach Ride is only the second set to include the light grey rock piece - and the first that doesn’t call for stickers. The white candle flame is the perfect plume of hair for Professor E. Gadd and it’s the first opaque appearance for this part. The bottom row shows the Series 4 Character Packs’ numerous recolours, but most exciting to me is the green SNOT bricks found in Coin Coffer. That 1 x 1 brick has appeared in nearly every shade of green except default green… until now!

The easy-to-use Super Mario theme relies on printed parts to perfectly represent Nintendo’s precious characters without a sticker sheet in sight. The 2022 sets continue this tradition with over a dozen eye prints, a handful of mouths, and one really neat wood-patterned tile.

A number of printed pieces are used to build Professor Elvin Gadd in and I’m fond of the round tiles making up E. Gadd’s eyes - those blue circular patterns look useful for sci-fi builds. The dark pink bricks are a more versatile variation on the numbered 2 x 2 bricks in 71368 Toad’s Treasure Hunt. 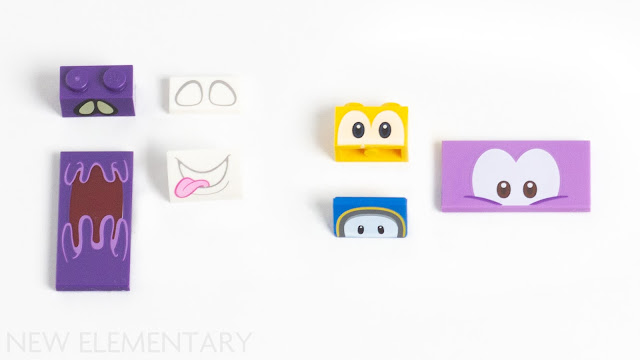 With the same cartoony ghoulish looks as Scooby-Doo, the ghosts of Luigi’s Mansion Entryway are given personality. The yellow Yoshi eyes in Big Urchin Beach Ride are similar to Koopa Troopa eyes but these pupils are dark blue instead of green. 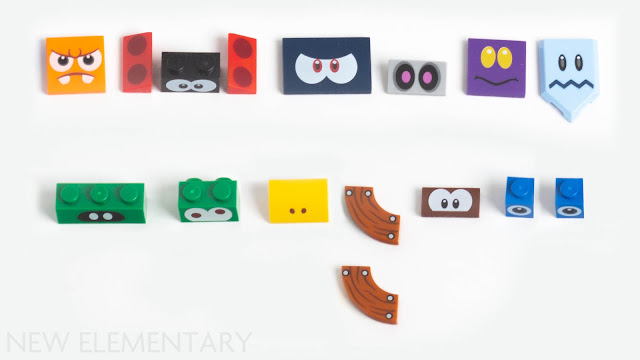 With at least one new print per character, the Series 4 Character Packs introduce numerous new prints. Mechakoopa boasts the most new prints with three, including the new-for-2021 wood macaroni tile, so far only seen in Friends 71679 Forest House.

Even with all these new pieces and prints, one of the biggest elements of the Super Mario theme is play. In New Elementary’s next Super Mario article, we’ll see how LEGO Luigi handles his new Poltergust and faces the ghosts of Luigi’s Mansion.

READ MORE: Which Nov & Dec 2021 sets have the most new elements?

Posted by: Admin Posted on 12/22/2021 11:10:00 am
Email ThisBlogThis!Share to TwitterShare to FacebookShare to Pinterest
Labels: Super Mario