Thomas Jenkins not only reviewed 2020 LEGO® Star Wars™set 75293 Resistance I-TS Transport, he also created an alternate build! Buying this $99.99/ £89.99 / 99.99€ set? Consider using our affiliate links: UK LEGO Shop | UK Amazon | USA LEGO Shop | USA Amazon | Australia LEGO Shop, for other countries 'Change Region'. New Elementary may get a commission. The products in this article were provided for free by LEGO; the author's opinions are not biased by this. 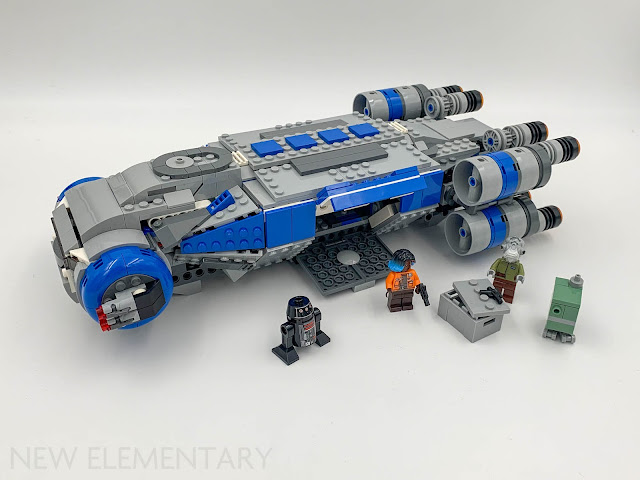 The I-TS Transport hails from Disneyland’s Star Wars-themed world, Batuu and although the vehicle shares a design similar to that of the Rebel frigates (like the Tantive IV blockade runner), this ship was unfamiliar to me. Given the relative obscurity of this vehicle, I imagine that this set went overlooked by most LEGO® fans in favour of the more recognisable vehicles and locations that made up the rest of the 2020 summer wave of sets. There are a few interesting parts and 2 exclusive minifigures to this set, which makes me hope this might be somewhat of a dark horse amongst last summer’s offering of Star Wars fare.

As expected, the parts that make up the transport are predominantly grey and blue with a smattering of other colours to round things out. There are a handful of recolours that were introduced in this set and we also received a few uncommon parts that are worth talking about, as well as two unique minifigures and a brick-built astromech with decorated parts, all of which are exclusive to this set.

The following parts were recolours introduced in this set: 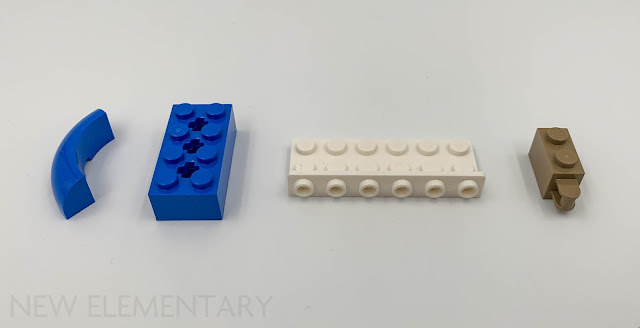 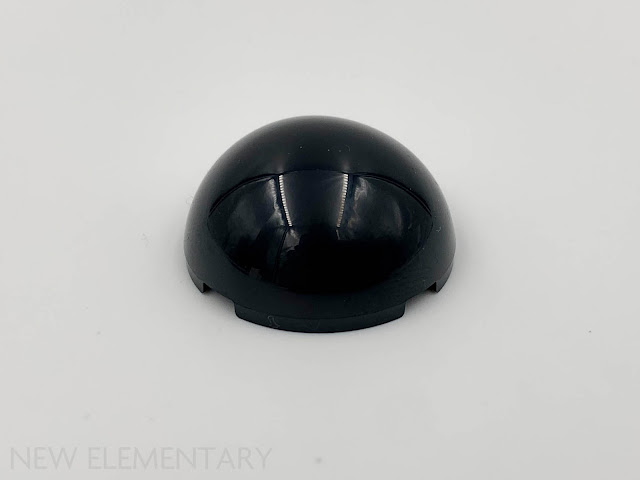 1x Dome Hemisphere 4 x 4 in Black (6252319 | 35320). This is a pretty rare part having appeared in only two sets and a polybag over the last 3 years. It was due to appear in the cancelled 42113 Bell-Boeing V-22 Osprey last year, so I’m grateful for its appearance here making it more widely available.

There are four characters crewing the I-TS transport: Vi Moradi, Lieutenant Bek, an unnamed Astromech Droid (all of whom possess new printed parts) and a GNK Power Droid (who is constructed with pre-existing elements). 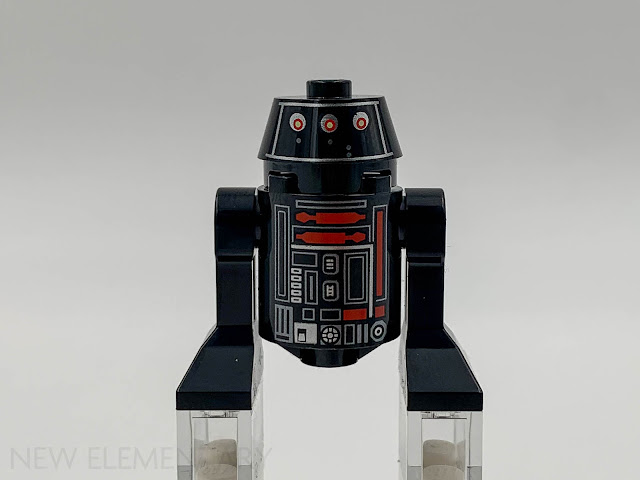 Round 2 x 2 Truncated Cone with Light Bluish Gray Astromech Droid Markings in Black (6308137 | 68730) and Brick Round 2 x 2 x 2 Robot Body with Black/Dark Red Markings - with Bottom Axle Holder x Shape + Orientation in Black (6308138 | 68732) are both new prints for these elements and are exclusive to this set. They are used in the construction of the unnamed astromech droid (which is not listed as a minifig in the LEGO Shop product description). 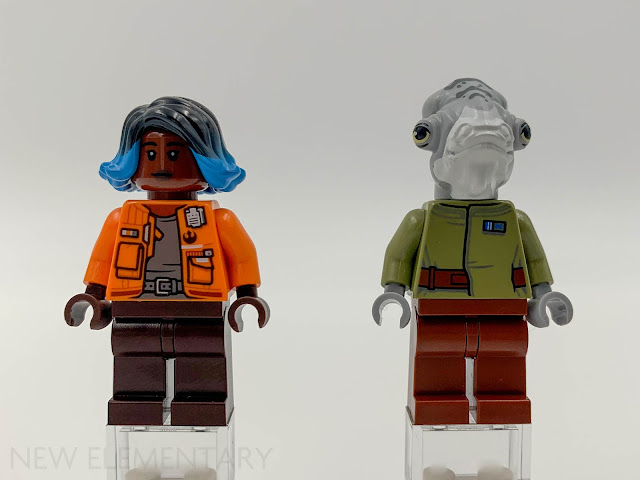 The notable parts that make up the minifigs are: 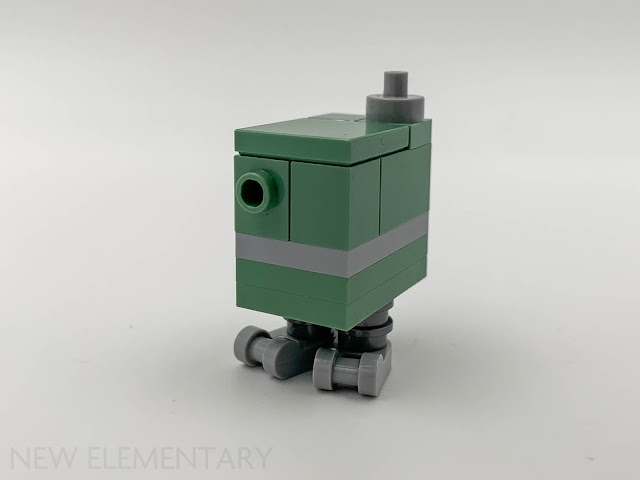 The fourth character, the GNK Power Droid is constructed with conventional bricks- mostly Sand Green. It’s not a bad representation of the character but some printed elements might have worked a little better than what we got here (and may have provided a bit more of an incentive to purchase this set). 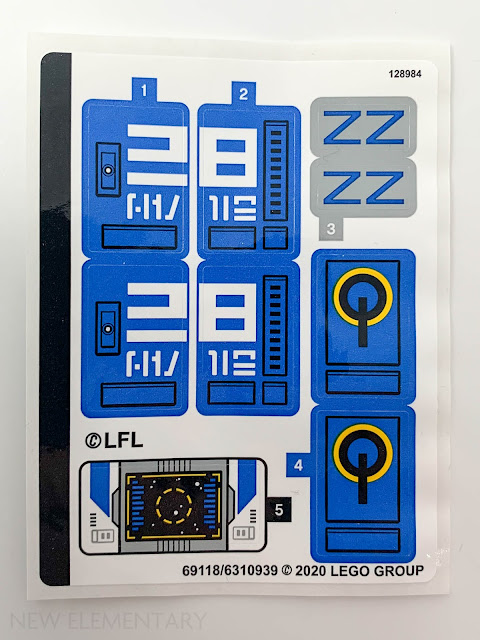 The set also includes a small sticker sheet. I think these designs are all generic enough to be used elsewhere and not just for models from the Star Wars universe. All stickers except the control panel are pretty superfluous, the model benefits form their application but they’re definitely optional.

Construction starts with a Technic-based frame and the set utilises some interesting techniques to make it extra sturdy. 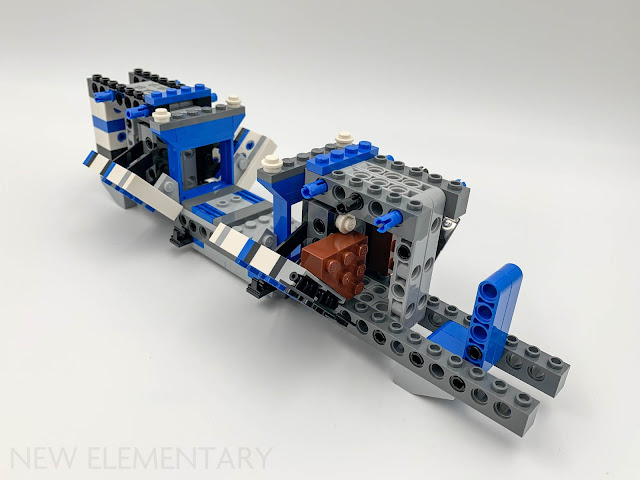 The placement of these hinge bricks had me quite puzzled early into the assembly of the set. It’s not a mistake- they are supposed to face inward like that. Rather than being used as they were originally intended, a hinge, their one-module tall dimensions are used to compensate for the offset between the holes and studs of a Technic brick. 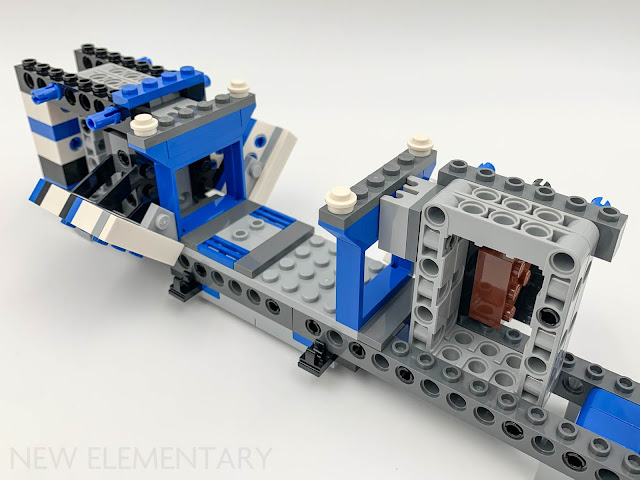 The constructions upon the 45-degree plates are reinforced by a brick of the same angle. These are attached to the square frame to facilitate some further SNOT construction. 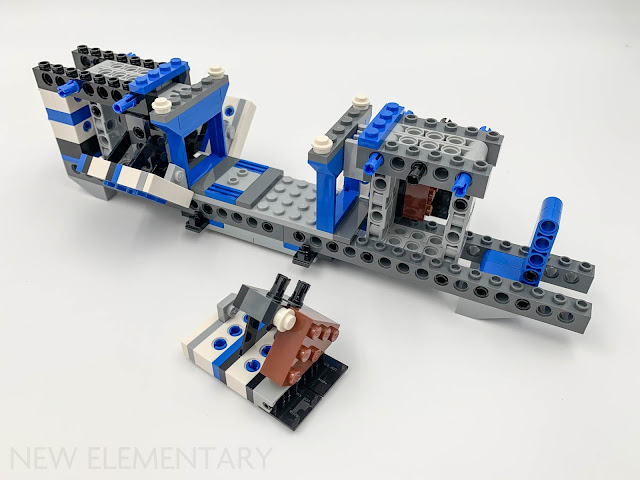 After the completion of the first two bags of parts, we’re left with a sturdy Technic frame that has plenty of connection points; hinges, Technic pins and clips on which to attach the multitude of angled plates that make up the ship’s hull.

The designers have done well to match the angles of all the wedge plates to create some really interesting shapes along the hull of the ship. My favourite is the area behind the cockpit with these three wedges meeting almost seamlessly to make this wonderful shape. 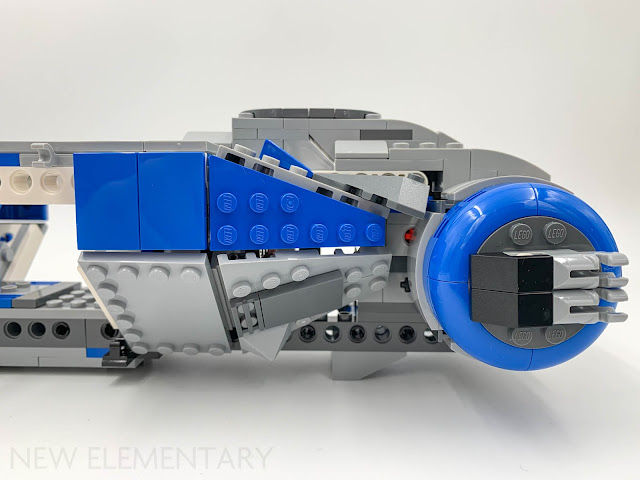 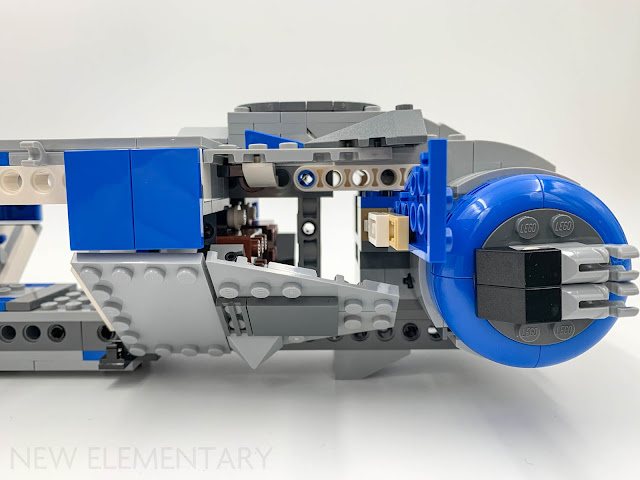 The characteristic cone of the bridge found in a lot of the more iconic Corellian transports of the Star Wars universe (for example the Tantive IV) has been approximated by ‘stepping’ bricks as the cone nears its tip. It’s finished with the wonderful blue quarter circle bricks. Cones are one of the most difficult shapes to create in LEGO and this is a decent job. I really like the use of the SNOT technique to create the middle section; it’s a clever use of the rail plate to fill that gap between the perpendicular curved slope elements, helping to smooth out the cylinder. 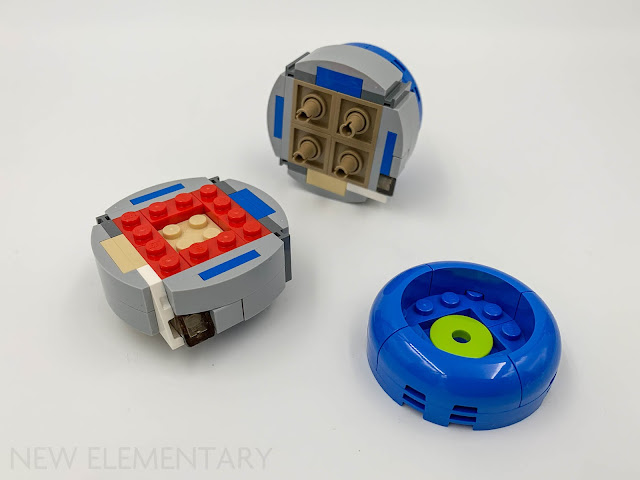 The use of some more Technic parts facilitates access to the cockpit. It’s a well integrated feature, with the roof of the cockpit meeting the rest of the model with minimal gaps. 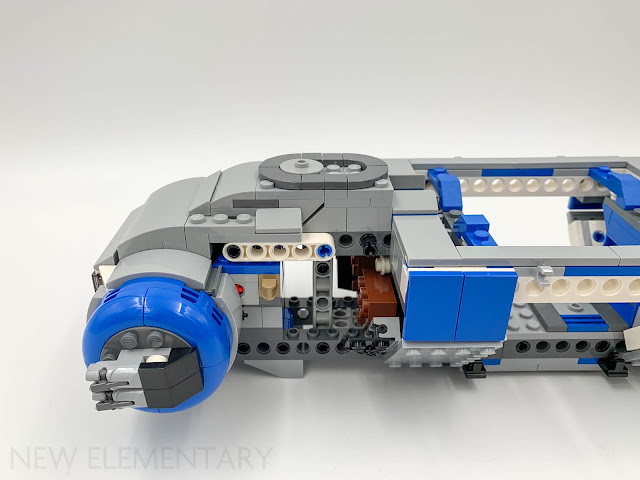 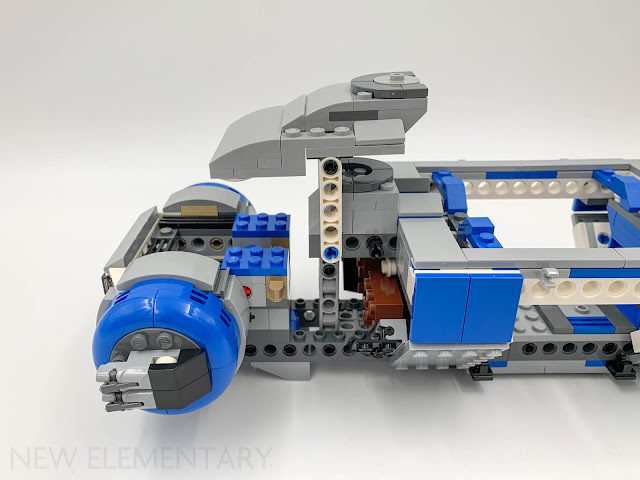 An armament of stud shooters sit in the centre of these nose cones and rotate thanks to the use of a Technic pin. The shooters detract from what is otherwise a quite attractive construction of this area of the vehicle, but they are an inevitability in a Star Wars playset. 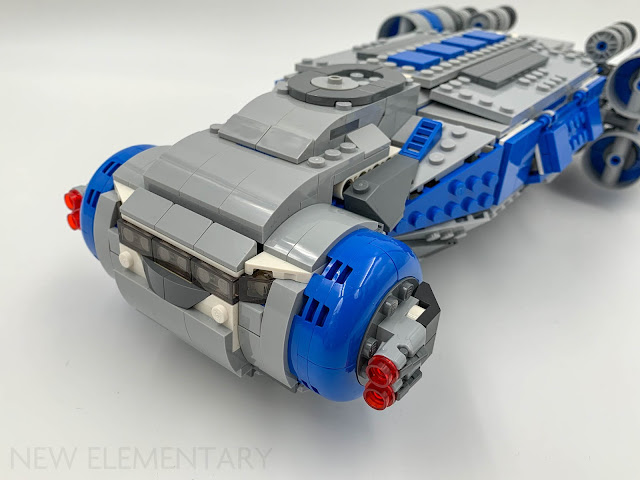 There are more studshooters to the aft of the ship, surrounding what I expect is a viewport. Although I’m grateful for the black dome included in the set, a transparent dome and seat for a gunner would have been nice. 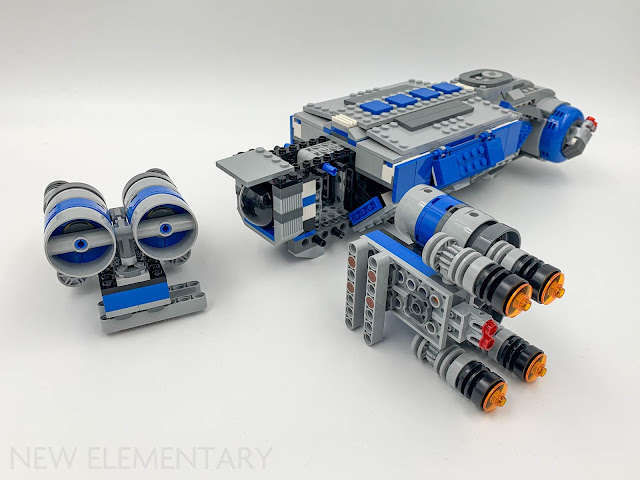 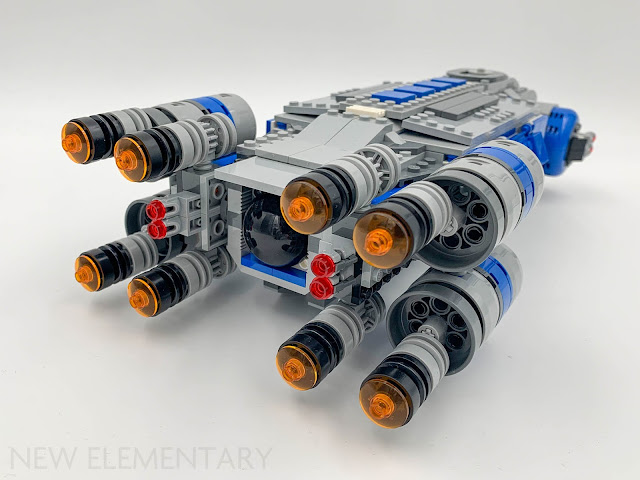 Engines are attached with some nice Technic integration allowing the substructure to fit easily on to the main frame. Technic and System cylinders come together harmoniously to create the engines themselves. 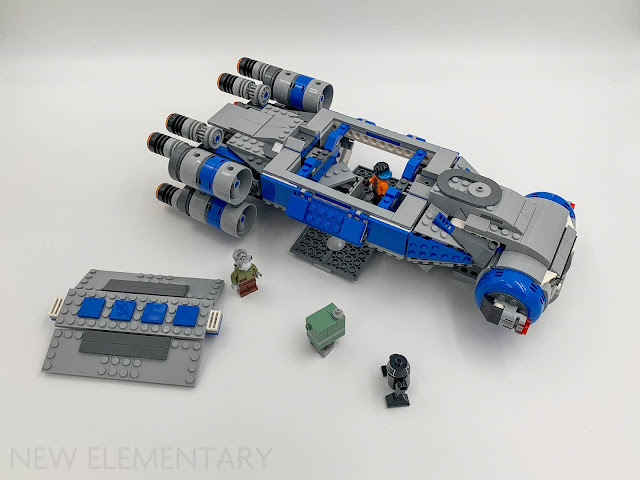 The geometry of this LEGO vehicle quite closely matches that of the real-life model from Galaxy’s Edge. But even if you’re unfamiliar with the source material upon which this is based, there’s no doubt that this is a ship from the Star Wars universe. There are clear design cues taken from the Tantive IV Blockade Runner up front and the thrusters at the back share some DNA with the iconic X-wing or U-wing. It’s a faithful representation of the source material, and you can tell a lot of attention has been paid to recreate the details found in its real-life counterpart. 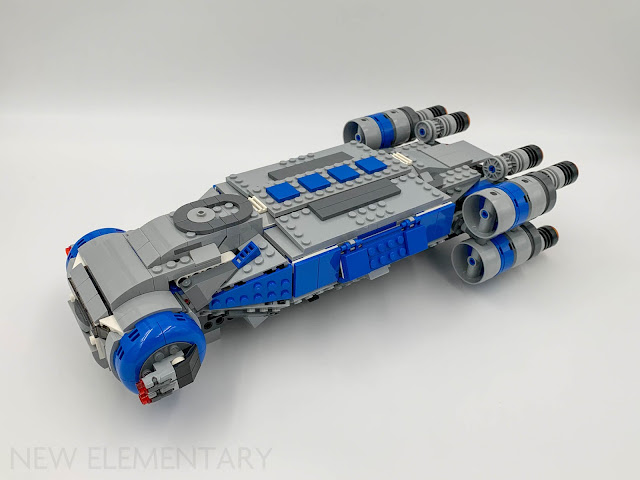 The panels that make up the hull slope at a variety of different angles- even the roof panels sit at a very subtle gradient- and the overall effect is quite impressive. I love how all these panels have been matched to each other almost seamlessly and the finished model is almost bomb- proof in its sturdiness thanks to the underlying Technic frame. 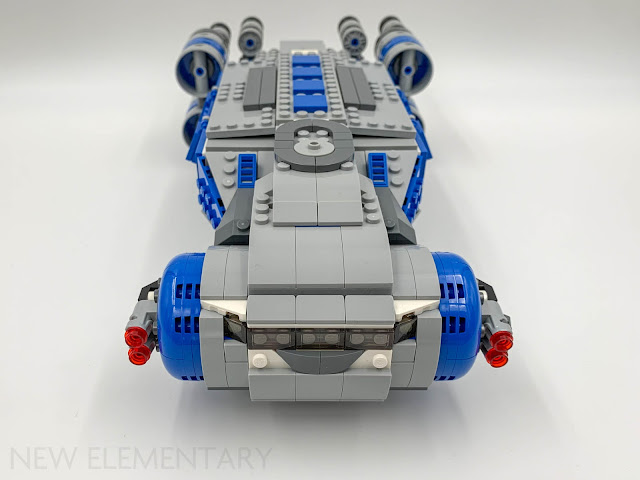 The roof panel is removable revealing a somewhat cramped interior- there’s just enough room for the crew and a solitary cargo container. 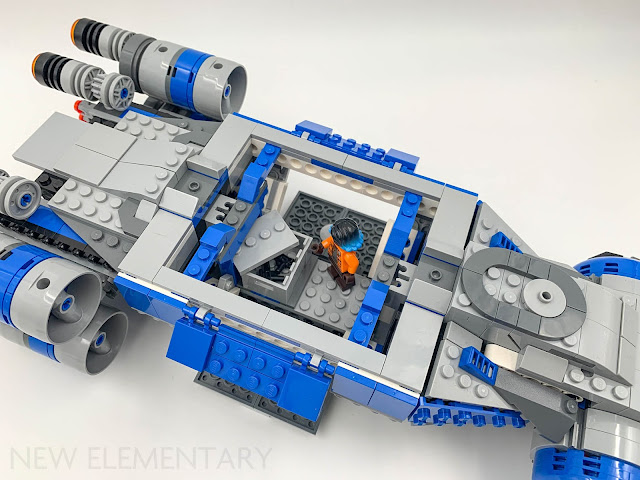 Further access to the cargo hold is facilitated by doors on each side. It’s a shame that white Technic beam is so conspicuous though. 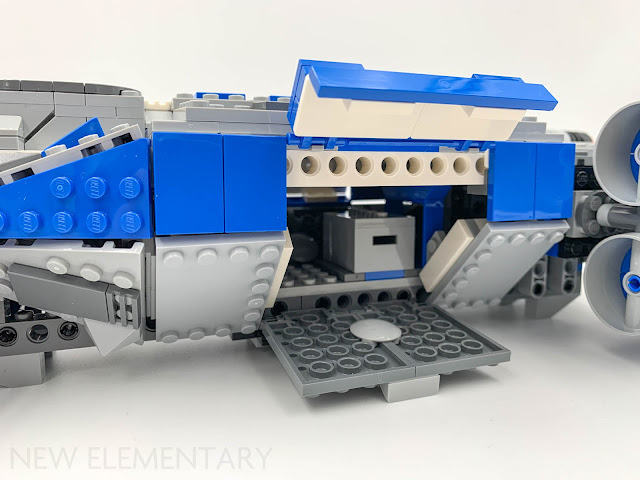 We talked about the opening cockpit feature earlier, but sadly what lies inside is devoid of any detail, especially since I omitted the stickers. A joystick at the least would have gone a long way to add a little bit more detail. This is probably the biggest disappointment of the set for me. 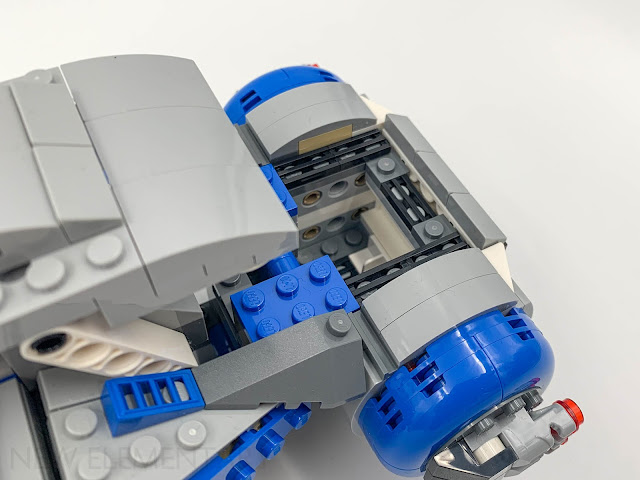 The selection of parts made designing an alternate build quite difficult. The set contains a lot of large parts- for example, 1x2 bricks with studs on sides as well as the larger plates and Technic beams- making intricate SNOT work and detailing challenging. I was hard pressed to find any parts with which to create greebles and small details. 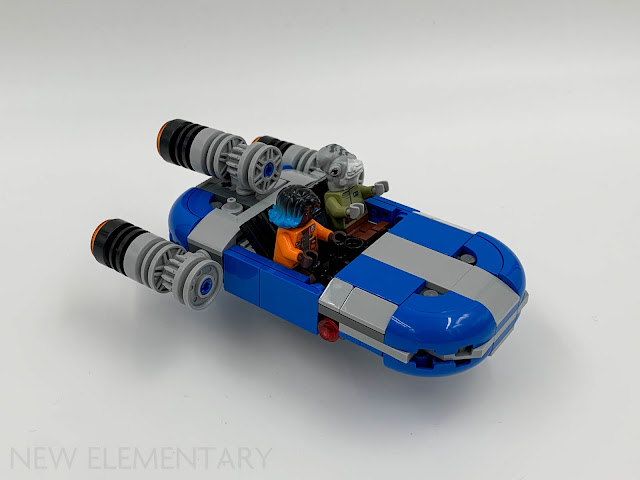 Despite the limitations, my efforts did produce this rather Star Wars-y landspeeder. I think the quarter circles work rather well in this application. 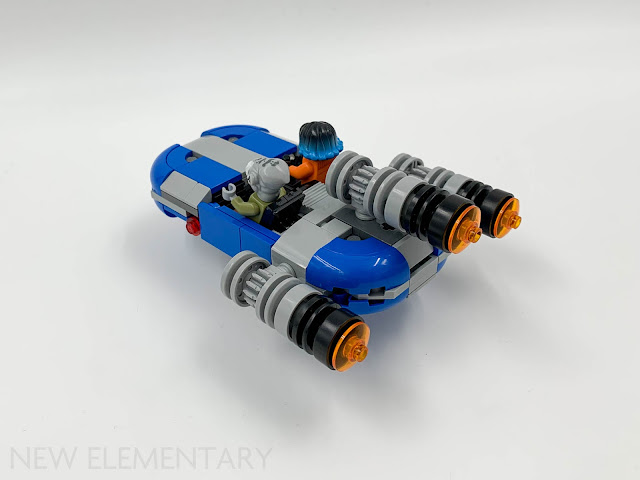 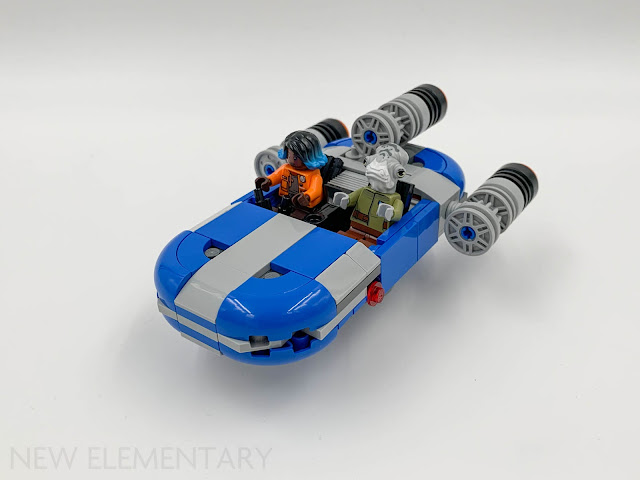 The rounded shape of the edges was achieved by overlapping the top and bottom halves of the vehicle. There’s no stud to stud connection, but the overlapping plates/tiles lock the halves into place. 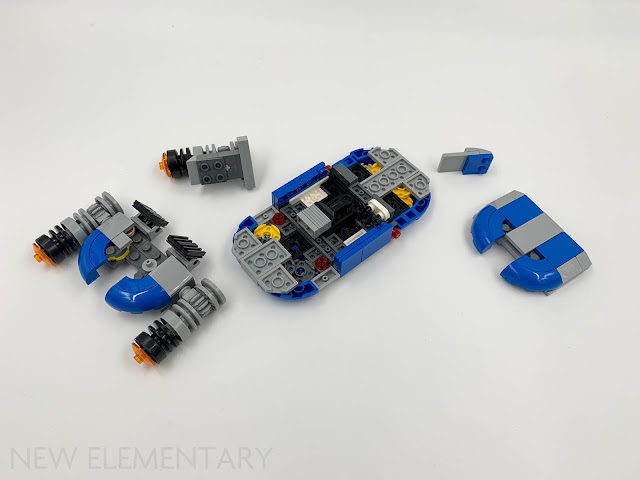 The I-TS Transport is a pretty accurate representation of its real-life counterpart and I’m very impressed with the cleverly engineered sloping panels on its exterior. The inside on the other hand is a bit cramped and a little sparse, but a lot of room is devoted to the nigh-on-indestructible structure that also facilitates all the clever geometry with which I was so impressed.

As a playset there are plenty of doors and a removable roof panel to allow access to the interior. Considering these points, the set makes a nice addition to a Star Wars fan’s collection or a playset for younger fans of the franchise. I think there’s a lot for younger builders to learn while constructing the set.

From a parts perspective, there are a few useful and interesting pieces among the grey plates, the standout for me was the blue quarter circle bricks, which are still exclusive to this set. The inclusion of two (three including the astromech droid) exclusive minifigures make this an attractive set for Star Wars fans, but maybe not enough to justify a purchase considering the large price tag of $99.99/ £89.99 / 99.99€. If you do purchase please consider using our affiliate links: UK LEGO Shop | UK Amazon | USA LEGO Shop | USA Amazon | Australia LEGO Shop, for other countries 'Change Region'. New Elementary may get a commission.