Recently, Thomas Jenkins represented New Elementary in a virtual roundtable interview with the designer of LEGO® Botanical Collection 10280 Bonsai Tree, Nicolaas Vás (aka @PrinceGalidor) and Senior Design Manager Jamie Berard along with Jay's Brick Blog, the Brothers Brick, the Rambling Brick and Blocks Magazine. We each had 8 minutes to ask our questions, so what follows is but a short excerpt from our conversation (edited for readability and clarity). We sent Nick and Jamie our questions ahead of the interview and they came back with some really thoughtful responses. Be sure to check out the other outlets for more. 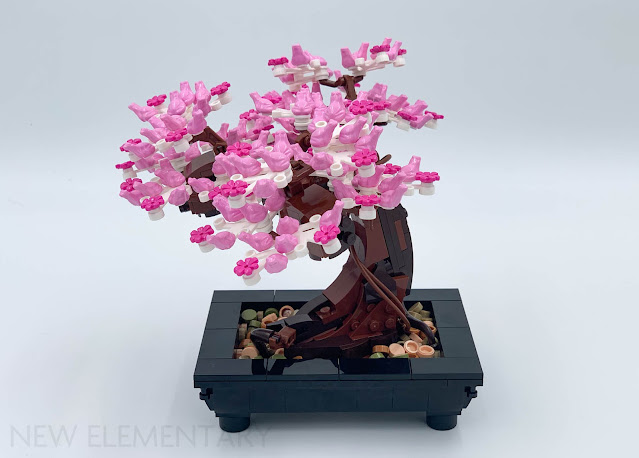 New Elementary: The pink frogs in the set as well as your own bonsai creations have inspired a number of custom trees blooming with crazy flowers in the AFOL community, are there any that have caught your eye?

Nick: There was a particular tree that I saw from a Japanese builder online and he had basically covered the entire tree with LEGO® Friends hedgehogs and it was fantastic to see that he absolutely gets what this product is about.

We know you have a love for the Frog element, was it something you were determined to include in the set?

Nick: I have a little disclaimer story that I'd like to say: I don't specifically set out to put frogs in my LEGO sets. I don't know how many sets have used it but I've got a list somewhere… I really like including small animals, because I loved receiving these fun little parts when I was a kid. Sometimes it can be difficult to justify including animals in like, a car or a boat because it isn't specifically about an animal. So I have a tendency to use the smaller, undecorated animals that can easily read as something else. And personally, I believe that using pieces as something other than what they were originally intended for is such a core quality of LEGO play. So that tiny, lumpy, ambiguous appearance of a frog, in my mind, makes it the perfect LEGO element. And yeah, I hope it's gonna stick around forever.

Two of my greatest passions are useless trivia and the LEGO frog. Today I combined those passions by compiling a Bricklist of #LEGO sets designed by me that contain frogs! https://t.co/PbImtyNJcQ pic.twitter.com/Wi9ce9HZTp

Of your own custom bonsai that feature in the back of the instruction manual, are there any that you are particularly fond of?

Nick: I mean, I'm obliged to say that I love all of my creations equally but I think the Pohatukawa tree is my personal favourite, just because it harkens back to my first BIONICLE set that I had as a kid. I really appreciated the chance to make a little tribute to that.

Some of my other favourites include the brick separators, or the octopus… even lots and lots of bananas: that was a fun one. Spiders was a really good one too; that worked at a distance but had totally the wrong effect up close.

As well as your custom bonsai, you've shared some trees that you designed prior to 10281 Bonsai Tree on Twitter. They are quite different to the one that ended up in the actual set. Does the final product share any similarities with those original models?

Nick: Fundamentally, it's kind of the same idea: you've got a tree, a pot, a display stand, and soil. But in many other respects, it's completely different. I think in a lot of the different builds that I went through, I was always designing from scratch and trying again: what if it was slightly smaller scale or slightly bigger? And once I got to work on the set officially, I had a big head start where I had already gotten so much exploration out of my system in that I already kind of knew, "Okay, these are the things that work and don't work, so this is where I should really focus on for making the final version." And it was also at that point, really exciting to be able to use all of the new elements that were available, like the 'maxaroni'  and also a few juicy colour changes as well! 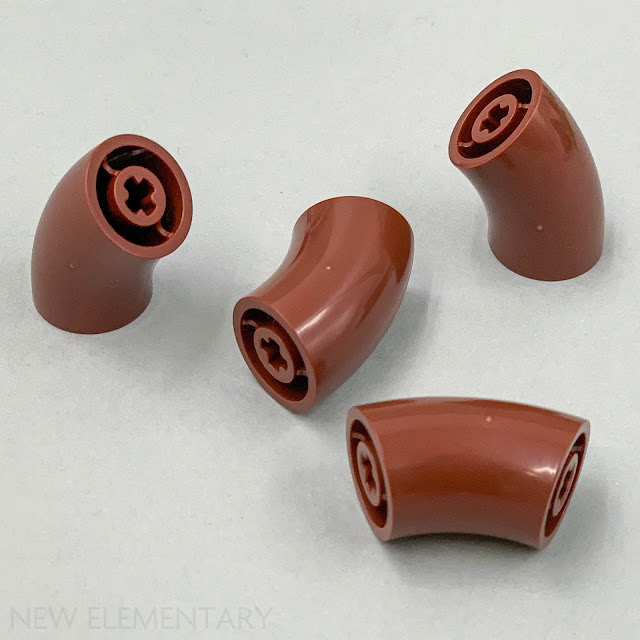 Yes, New Elementary always appreciate new colours, so thanks for that! So, this 'maxaroni' as you called it, part [Brick Round 1 x 1 diameter Tube with 45 Degree Elbow(2 x 2 x 1) and Axle Holes] 65473 arrived in sets in 2020 and it's only appeared in four sets, with Bonsai Tree introducing a colour change to Reddish Brown. Perhaps you wouldn't have used it in your earlier models, but was there any discussion as to whether it was right for the set?

Nick: When I first started working on this set, I explored making trees that used just the maxaroni to kind of see how we go with that style of piece. And from that, we decided that it would be better to focus back on a more recognisable System direction. But essentially, since it was created for 43179 Mickey Mouse and Minnie Mouse, and the designer of that set, Ollie Gregory was really encouraging other designers to use it in everything that they could, I was really happy to oblige.

Some builders might find that the axle hole connection in the piece might limit its application compared to the full rotation that a Technic snap would have allowed, why was that decision made?

Jamie:  We didn't actually develop that element, so maybe Ollie would be a better person to ask. But for my take on it, I know that if you did have a Technic snap, you have this little slip, this little way that would break the curvature in order to allow the snaps to open up again. That might have influenced some of the discussion. And also, the fact that Ollie probably wanted to position the legs more deliberately- because it was supporting Mickey and Minnie- if you do have that degree of flexibility, it's harder to depend on it without the model wanting to shift. So, I imagine on at least those two accounts- without knowing specifically- that's where I think it might be an issue.

Nick: I know that there were a lot of explorations that went into that piece. And I'm sure Ollie still has them floating around somewhere. 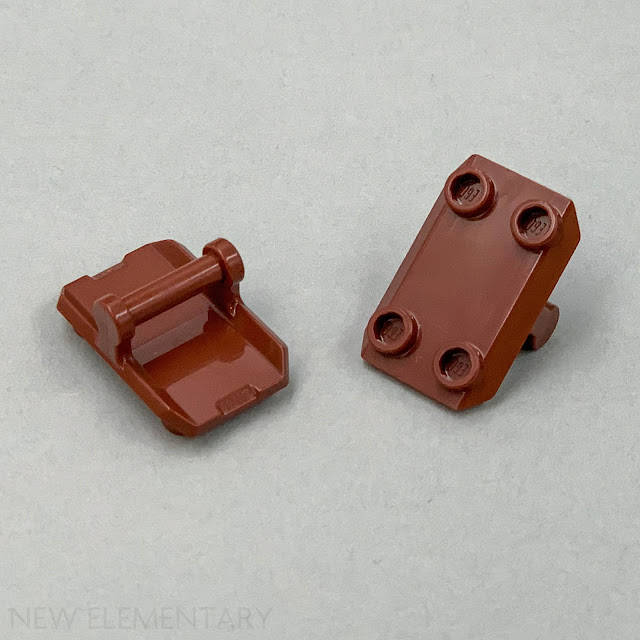 Another part that appears in the Bonsai Tree is part [Minifig Shield Rectangular with 4 Studs] 30166. It's been a bit of a surprise to us, appearing in far more sets than expected, and put to amazing use once again, this time in Reddish Brown. Why do you think designers use it so much?

Nick: I've been thinking about your question a lot. I think it might just be one of my favourite pieces. It's really versatile, despite its strange origins as a shield from LEGO® Star Wars™. I think I've personally colour-changed it twice, and used it in my sets in every colour except white. I think it's probably been in about half of my sets since it was introduced. It's a lot like the classic rocker brick [Hinge Brick 1 x 2 Base (3937)], but it's compatible with the whole clip family. So that just makes it super versatile for doing all sorts of interesting angling techniques. Personally, I'm a firm believer in having the occasional part that does something weird or unexpected, because it often helps unexpected building possibilities. Also, I think some designers (including myself) can be a bit like one-trick ponies where, if they find something that works, they'll just keep doing it over and over. I feel like that with the bonsai tree in many ways. It's kind of an honest expression of who I am as a designer.

Seeing them appear in the base of the tree to create the angle of the trunk surprised me. Obviously a lot of thought went into the shape of the tree, the branches, everything.

Nick: Yeah, the triangle technique with those shields: it's this sort of 'reflected' triangle. I was super happy to be able to get that in there. It's not a new technique, we've used it in other models before but I was super happy that it was made quite obvious in the set and it got people thinking. And that's definitely one of the hopes with LEGO sets: that we are able to inspire people with all these different tricks in building. I mean, you made a fantastic diagram, showing how that works. 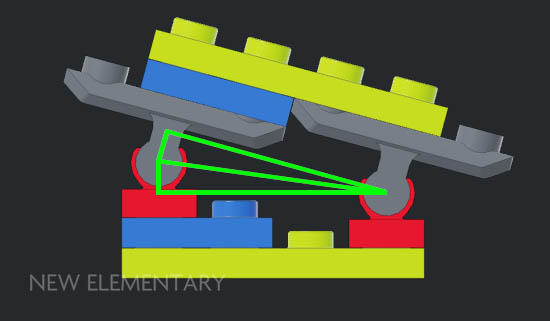 Do you have a favourite building technique that you used in creating the Bonsai Tree?

Nick: That's a good question because it's a very broad selection. The thing that I enjoy the most is that each bag is so different. In the pot, you've got a very traditional building experience, then you've got the turntable-sort-of-reverse-thing…[Ed: There is a Turntable 4 x 4 Square Base, Locking (61485) hidden in the base to sit the tree at a subtle angle.]

But I really love the technique of just dropping all of the soil in one step. And it was really fantastic working with Martin Højen Holm Buk, the building instructions developer, to create a special graphic for that. 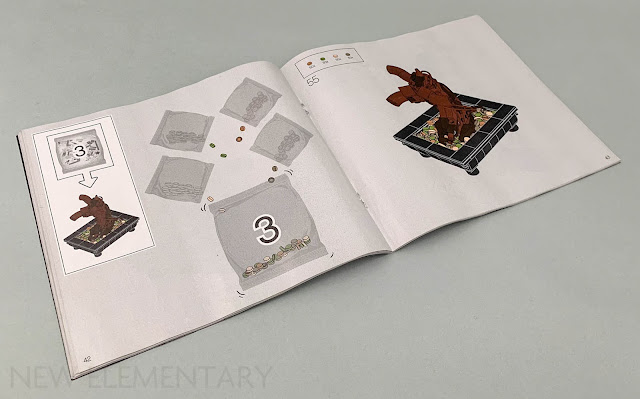 Martin showed me the digital model one day and all of the soil was arranged to look so organic, and he didn't want to tell me how long he'd been working on that. But then we spent another hour just looking real close, like, "Okay, can we flip that one to make it look more natural and move that one just slightly over there" until we were both satisfied with it. You really get to finesse the positions and that's really quite cool.

That is certainly one of the more unconventional building techniques. It sounds like you had a bit of fun with that. Did that creative decision require some persuasion?

Nick:  So, the original bonsai that I made - the bigger one - had the [loose] soil as well. But that was quite natural, because it was a MOC just for display. Then the first 'sketch model' that I made as a proposition for the proper set had wedge plates and slopes to build up this kind of rugged soil look. And through iteration and reflection with other designers about that, we realised it was just stacks and stacks and stacks of plates to build essentially just dirt. It wasn't that exciting and rewarding. I think just scattering in the soil was a unique opportunity to create something that is quite authentic to the soil-laying process. And if you turn it upside down, just like with a real bonsai that dirt will spill everywhere. So please don't do that.

Our thanks to Nick, Jamie and Sara from the LEGO Group for this interview!

READ MORE: Our review of 10281 Bonsai Tree examines all its new parts and techniques

Posted by: Admin Posted on 3/10/2021 07:55:00 am
Email ThisBlogThis!Share to TwitterShare to FacebookShare to Pinterest
Labels: Botanical Collection, Inside LEGO, Interview