Guggenheim, a museum made of LEGO® pieces 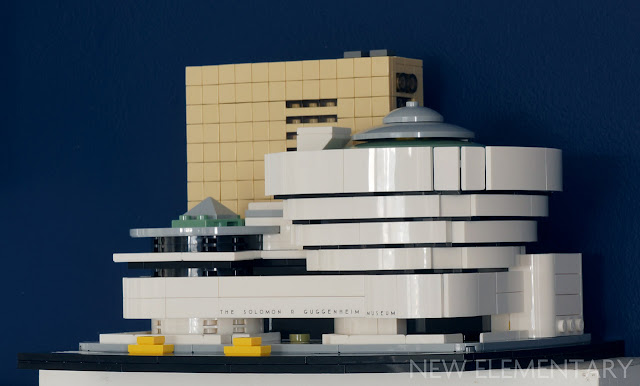 This is the second time LEGO Architecture have released a model of this New York museum; the first one being the much more compact set 21004, in 2009. Similarly, last year saw a second version of Burj Khalifa released and so we’re now seeing some repetition enter this theme in terms of subject matter. That’s perhaps not surprising given that LEGO Architecture is now entering its tenth year, yet on the other hand it is disappointing given that there is an awful lot of cool architecture in the world. Thinking it through however, the company does need to choose subjects that are going to sell! The pool of globally famous structures that can be rendered as highly attractive LEGO products is probably much smaller than I imagine, and there are many other complicating factors such as avoiding religious or potentially controversial buildings, or obtaining the necessary intellectual property rights to sell a model of a building for commercial gain. Perhaps the latter is another reason why buildings are being repeated? 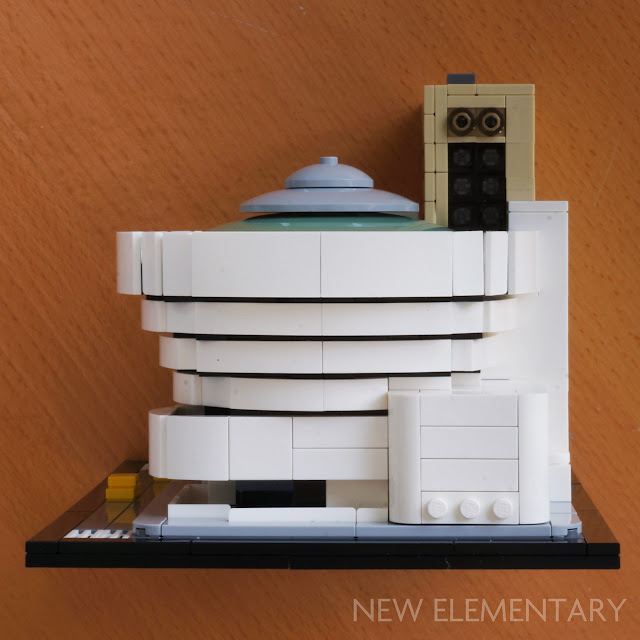 That said, this gorgeous mid-20th Century New York art museum designed by Frank Lloyd Wright is an irresistible subject and I’m so glad that they’ve done it again. Because this is marvellous. Scaling it up a little, and being able to use the many new LEGO parts released since the original came out in 2009, make for a stunning model. In fact the size and weight of the box were a surprise to me; it seems smaller in pictures than it is in reality. It isn't enormous though — the finished model is approximately 14 x 19 cm and just over 12 cm high — but is quite dense, heavy and extremely detailed. This all bodes well for a good build experience, and indeed it is, but first let’s look at the new pieces you’ll find in the set.

Unusually for me I laid all the parts out before building. That's an hour of my life I'll never get back. But it's a different approach to photographing elements I guess! Click to enlarge. 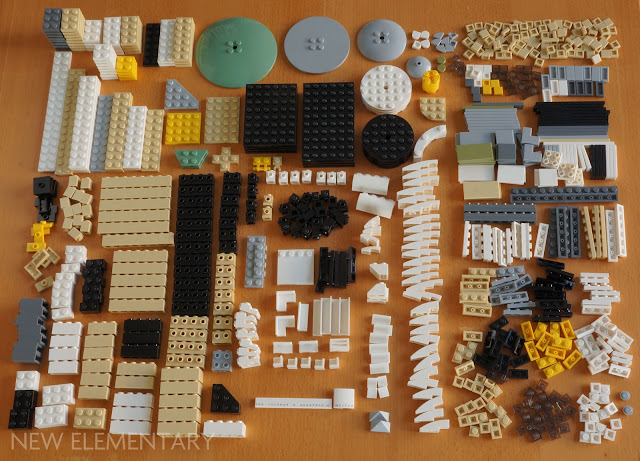 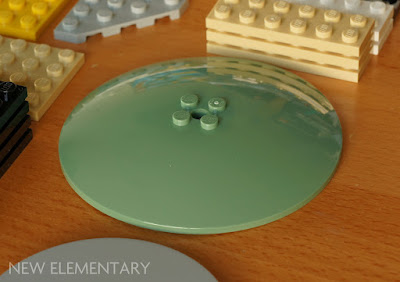 I would imagine the first thing everyone noticed were the Sand Green parts on the roof! Especially that gorgeous dish which I mistook for an 8x8 when it is actually a lovely 10x10 (Element ID 6187588|51373 or 50990b on BL). The two dishes that appeared in 21030 United States Capitol Building last year (currently available on discount from Amazon US|UK) are the smaller 6x6 (6146199|44375). This brings the grand total of available sizes of Sand Green LEGO dishes to three, but the 2x2 dish is much older and rarer so comes at a price.

Actually I will take this opportunity to discuss the 10x10 dish. It first appeared in 2005 and had recessed studs (Design ID 50990 or 50990a on BL) but was replaced after 2009 with a new mould that has solid studs (51373 or 50990b on BL) which is the version that appears here. However last year TLG began making these dishes in transparent shades once again, and these have recessed studs. So it has a new Design ID again (19725) but BrickLink are keeping things slightly simpler by listing these under their original number, 50990a. It's exciting to have these available in Transparent (Element ID 6101861) once again! You'll find them in the whopping 71042 Silent Mary. 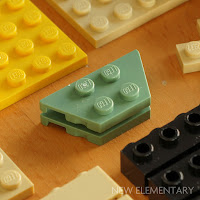 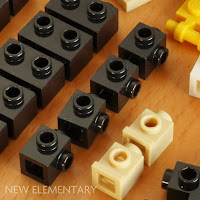 I think the most exciting new elements in this set are the Black ones. The newest mould present in the set is “corner SNOT”; the 1x1 brick with 2 studs on adjacent sides (6187572|26604). This appeared in Brick Yellow [TLG]/Tan [BL] on January 1st this year in 10255 Assembly Square (see my review) and is already present in nine other sets, however this is the first recolouring of the part. Four are provided. 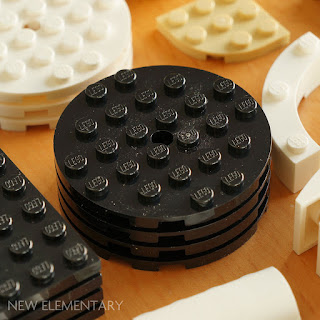 The other recolour in Black is surprising: I hadn’t realised the 6x6 round plate had never been provided in this colour before (6187587|11213). There are four here. Boy, do they attract dust! 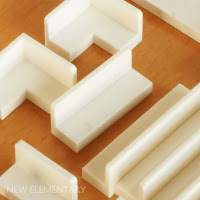 Last summer I mentioned the exciting appearance of a 1x3 panel in Dark Stone Grey [TLG]/ Dark Bluish Gray [BL]. In 2017 you’ll find it in White (6139694|23950) in this set as well as polybag 30352 Police Car. The latter contains two and there’s only one in the Guggenheim. Sadly, there was an opportunity for the designer to include another two, in place of a 1x4 and 1x2, which was either overlooked or (more likely) to avoid an increased cost.

LEGO Architecture sets traditionally come with Black printed tiles bearing the name of the building, although I recall at least one set which used a different colour (21005 Fallingwater). In 21035 Solomon R. Guggenheim Museum there is no Black name-tile on the base; instead the museum’s name appears above the entrance to the building, as in reality.

It is spread across two White parts: a 1x8 tile (Element ID 6182355) and a 2x2 curved slope (6182352). The lack of Black name-tiles on the base will probably irritate some collectors but they could always re-use the ones from the first version, where the text was spread across three 1x6 tiles.


Some of the finest detailing in this model is hidden if you look at it from above. The entrance and ground floor extend beneath the canopy and constructing these is a lot of fun. The range of White panels forming the perimeter are sunken into the surrounding tiles so that only one plate-height is exposed. From there, as you add pieces within the perimeter, it all feels rather random. For example a series of 1x3 plates are dotted about — are these the bases of walls? No, as these next pictures reveal…

The three studs on the plates are used to offset the Olive Green 2x4 tiles in two directions, by attaching to their three tubes underneath. The Bright Yellow jumper plates are used to offset a 1x6 in two directions — one direction is achieved by the use of a jumper plate and the other direction achieved by inserting the underside pins of the tile into the hollow studs, rather than the tile’s anti-studs. This all happens with no hand-holding in the instructions, so is likely to leave most people staring quizzically back and forth between the model and the page. Yay for 12+ sets! 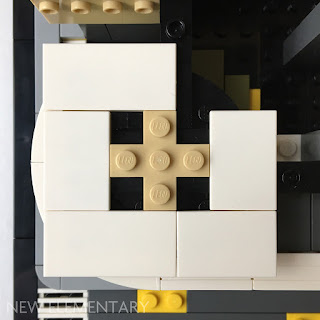 A similar situation occurs at the top of this section of the building, so that these White tiles can protrude by half a module.

But of course the real reason I took this picture is the lovely pieces used: three White 2x3 tiles (6156667|26603) which first appeared in 21306 The Beatles Yellow Submarine (read my review here) and now come in a dozen 2017 sets, and the Brick Yellow 3x3 cross plate (6061575|15397) which to date has only appeared in two very expensive sets. The studs of the cross plate go into the tubes of the 6x6 round plate above, restoring the build onto the LEGO grid again. 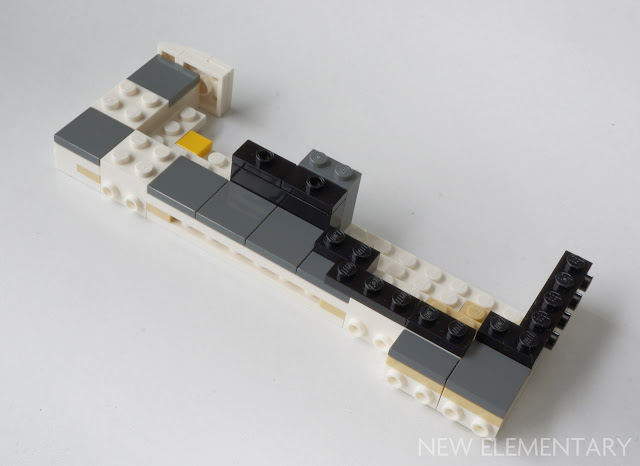 Here’s another example of this being a set for grown-up builders; a quite bonkers sub-assembly which forms part of the back of the building.

There are loads of curved slopes in this set, in terms of both quantity and variety. Of course, these are needed for all the curved walls of the building, in particular the iconic conical form of the main tower. In reality this is a spiral but in LEGO form it is represented by four concentric stacked rings, each becoming wider. 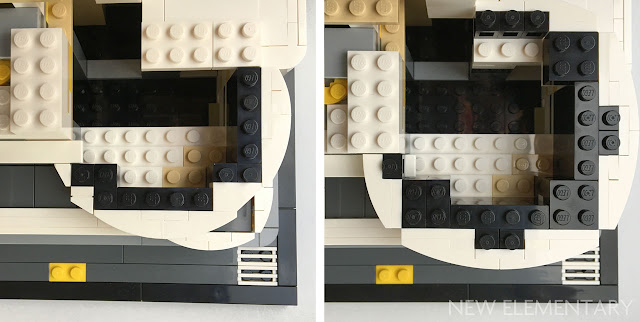 These are achieved with a variety of combinations of SNOT bricks, which are another category of LEGO part that come in great variety and quantity in this set. 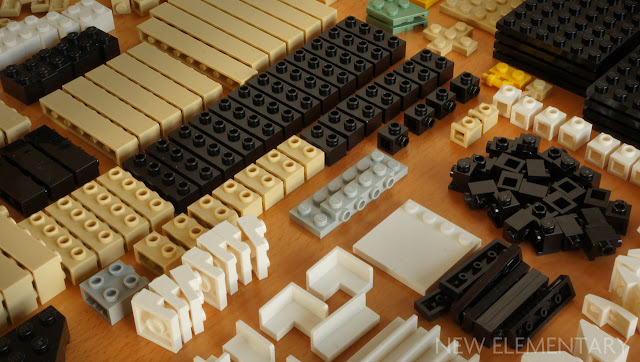 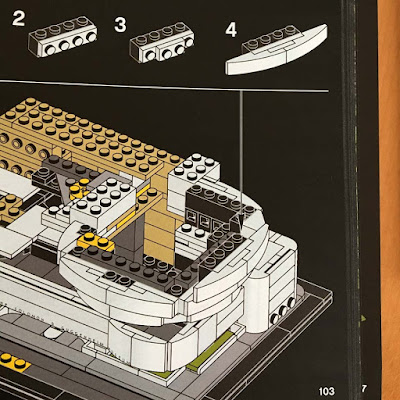 This step is another example of this being a 12+ set. The sub-assembly attaches in two places, each on a different plane: the Black 1x4 SNOT brick attaches to the studs below while one end of the White curved wall has to simultaneously attach to the sideways White 1x2 45° slope at the rear. It’s not hard, merely requiring an upward twist as you attach, but had the set been targeted at a younger age range, I imagine the Black SNOT piece and the White sub-assembly would have been divided into separate steps. 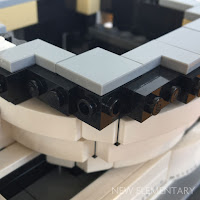 Remember the newest mould in this set, the four “corner SNOT” bricks? These are used in virtually the same way as in Assembly Square: in combination with cheese slopes to round off corners. They are not attached underneath - the build requires that you attach them to the 2x2 tile above before attaching to the model. 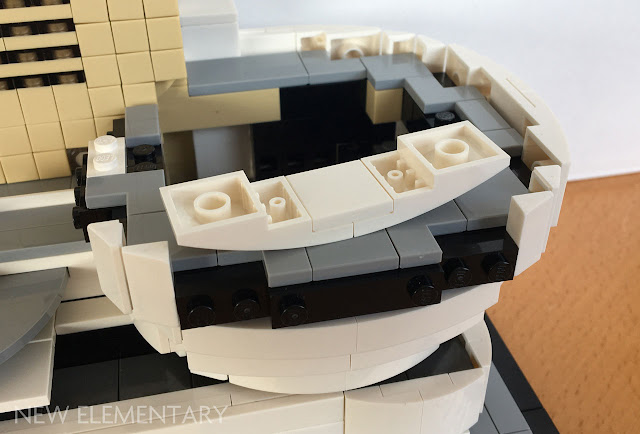 One piece choice by the designer for the topmost curve confuses me. You’ll see this White construction uses an inverted 2x2 tile to attach the two curved slopes, where a 2x2 plate would have done perfectly well. I suppose it may have been an aesthetic choice or perhaps using it kept costs lower, but I can’t think of any technical reason — maybe one of you can enlighten me. In any event, I’m much happier owning inverted tiles than plates. 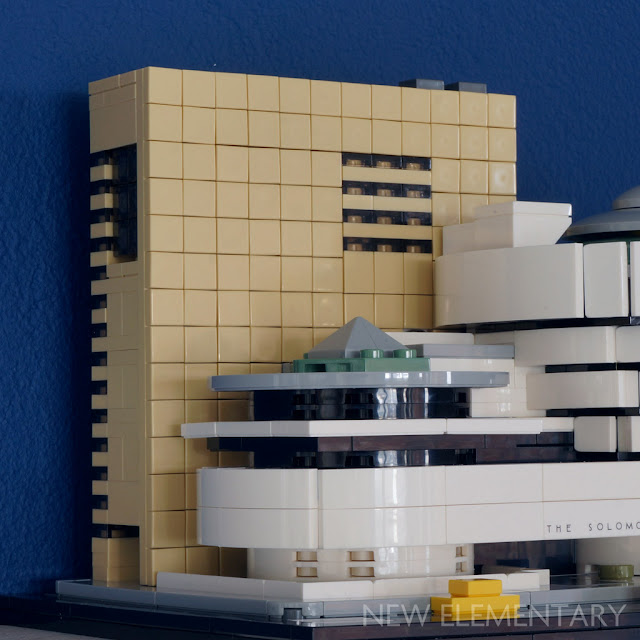 As you likely noticed, the tower at the rear (an extension built in 1992, by the way) uses Brick Yellow 1x1 tiles attached with SNOT to reproduce the building’s design. There are 103 of these in the set! If you’ve ever built a LEGO Architecture set before you’ll be well aware this is a dull, repetitive task… but it’s the only one in the set. 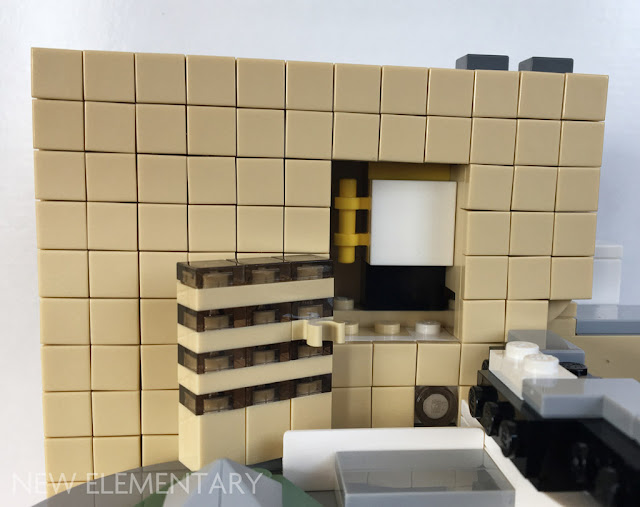 It’s pleasing that one chunk of it is built vertically and snaps in using a 3.18mm clip/bar connection. 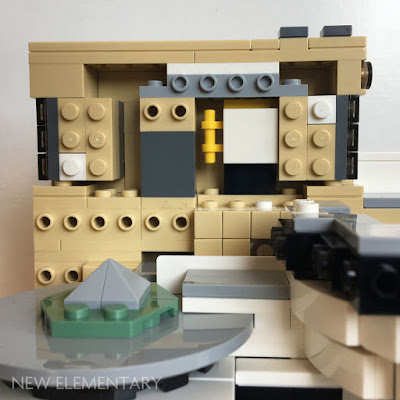 Behind the various platefuls of tiles is a crazy collection of SNOT pieces. This really looks like one of my builds — an unplanned, organic mess all covered up! Note the 2x6x2/3 SNOT plate in Medium Stone Grey [TLG]/ Light Bluish Gray [BL]  (6102575|87609) which has only been included in three sets to date.

I think this is my favourite LEGO Architecture set since 21018 United Nations Headquarters. If I were to put that down to one thing it would be the sheer variety of interplaying forms that you need to create along the way. It never gets dull, aside of course from the stretch of Brick Yellow 1x1 tiles. This variety is reflected in the inventory, with its mix of categories and sizes of parts. 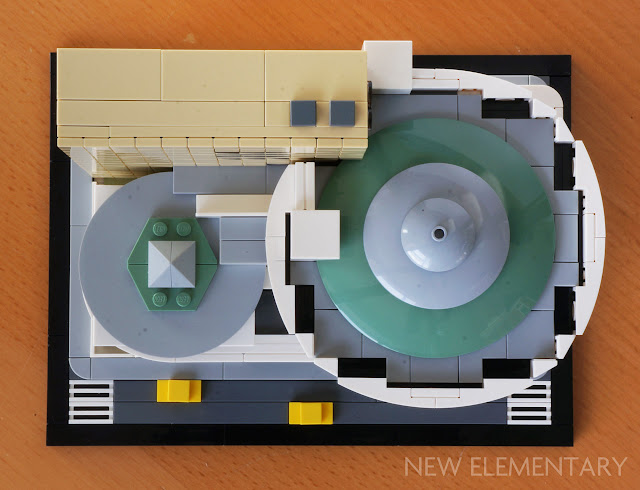 The only thing I don't like about it aesthetically is that from above, the White curved slopes form a jagged edge on the interior, an effect heightened by the Medium Stone Grey and Black tiles. This is the unfortunate by-product of switching from studs-up to SNOT building and no solution would have been satisfactory; indeed this is highly ingenious. 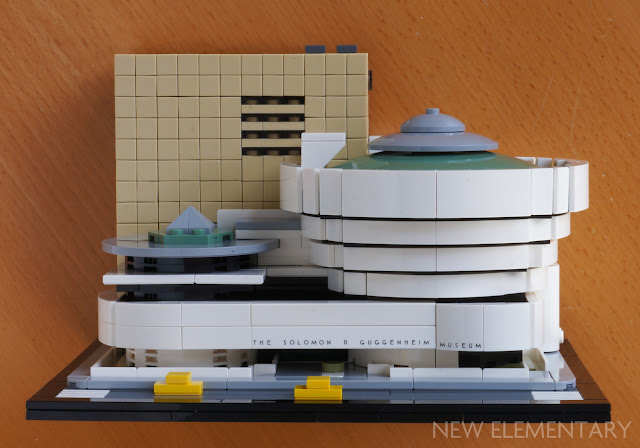 However it's much less of a problem if you display the set at eye-level, which I highly recommend as that is when you see its full beauty. This makes sense given that in reality, you'd be looking at the building from its base, not up in the sky! At eye-level the Black lines separating the White layers come into full effect and are just stunning. Also, you can see into the undercroft and all the detail therein. 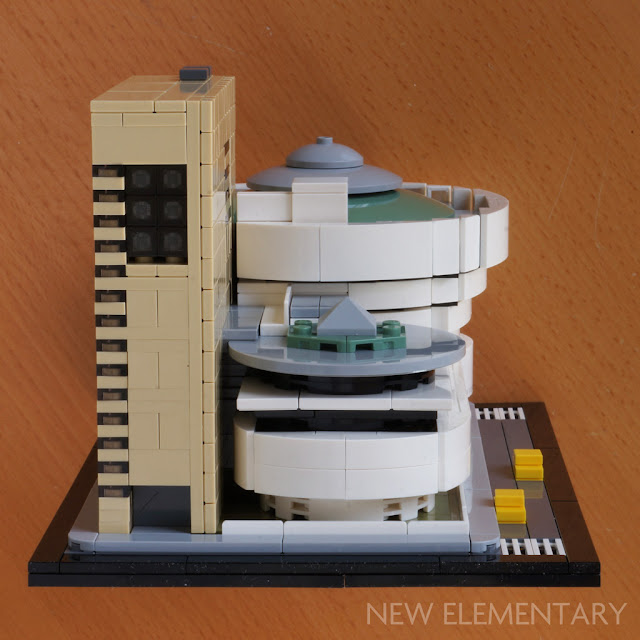 Products mentioned in this post were kindly supplied by the LEGO Group. All content represents the opinions of New Elementary authors and not the LEGO Group.
Admin: Tim Johnson Posted on 4/08/2017 11:43:00 am
Email ThisBlogThis!Share to TwitterShare to FacebookShare to Pinterest
Labels: Architecture, Set review