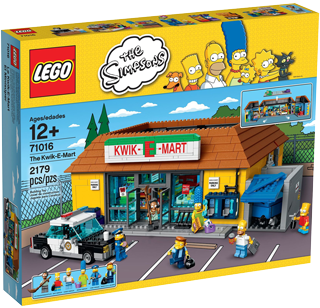 I regretted saying yes for a while... until I started building. From the outside it might not look thrilling but the build held my interest from the beginning. 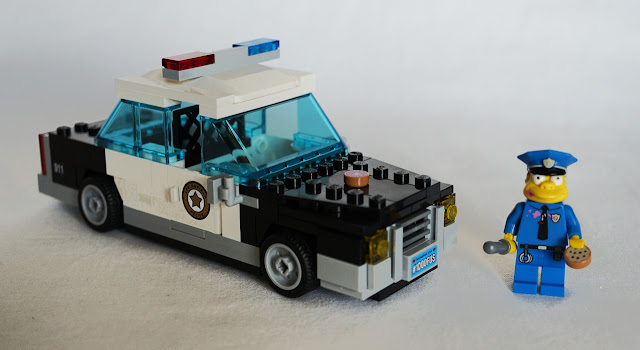 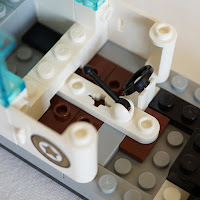 Wiggam’s police car is first and for a boxy car it is an interesting build. The best bit is the clever use of the short Technic rotor in White which is used as that long desired part; a 5-long plate. The designer also uses a Black one in the main building. They use the piece to full effect: even the hollow studs are employed. I am going to have to remember to use them myself more often. The car does look a bit out of proportion to the figures but then so does just about every other minifig scale car, if you think about it. Being so familiar with the Simpsons programme gives a different perspective and familiarity compared to, say, the LEGO® City line. 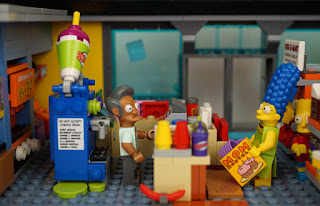 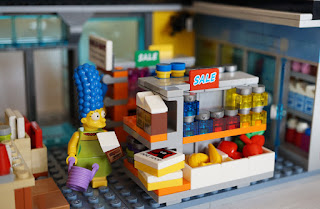 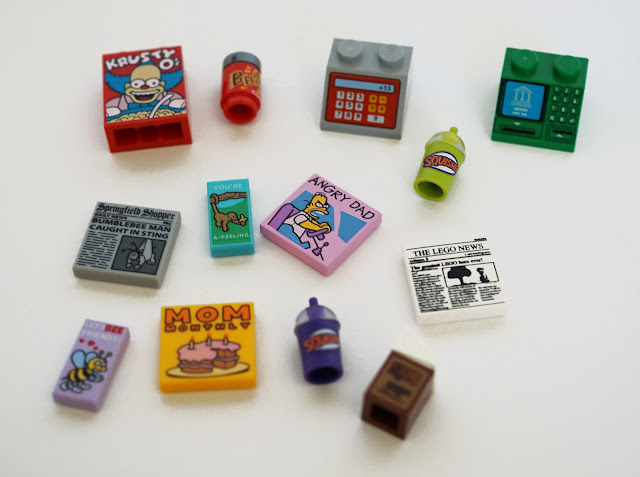 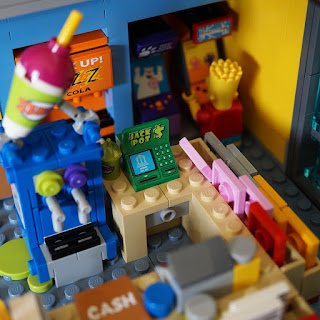 The store build is nicely divided between a bit of wall or floor building and the more fiddly details like well-stocked selves and fridges. I’ve read some complaints about the number of stickers in the set and honestly, this set must contain the most printed parts ever in one box; newspapers, Krusty Os, Buzz cola cans, cash register; the list is epic. I do not normally apply stickers as I intend to use the parts in MOCs but early on I started applying these. I guess it was because I love the Simpsons and nearly every sticker reminded me of an episode. You can tell the designers love the Simpsons too, not only by the printed parts and stickers but also the detail and care that has been taken over the build. No corners are cut and there are little touches throughout that you can barely see once the model is complete. It was a pleasure to build and never really felt tedious as some big sets can. 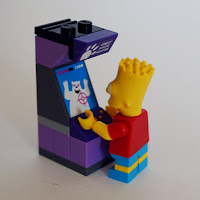 As you build you come across some nice examples of the sort of compromises set designers can make while still staying true to what they want to achieve. A simple example is the Great White Hunter arcade machine whose base is made of three 1x2 bricks in Medium Lavender. A 2x3 brick may be better but isn’t yet available in this colour and the use of three 1x2 bricks does not compromise the design. All new elements cost money so designers are limited as to how many of these they can have per set. Keeping the number of overall element types used in a set down also saves on the budget and allows more of the important pieces, like expensive printed parts, to be included. 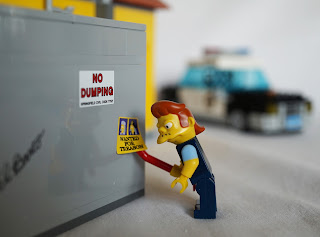 On the subject of stickers, I picked up a great tip from Flickr last year. Jacob Unterreiner did an interesting tutorial on custom LEGO sticker application. His most useful point about applying stickers in sets is the use of the crowbar. The last thing you want to do is get the sweaty, oily coating on your fingers on the back of a sticker; it can reduce the adhesion and show through on clear stickers. Instead, use the flat end of a crowbar under the corner of a sticker, press on top with a finger and lift. Holding a sticker on a crowbar also makes lining it up and placing it true that much easier. Try it and you will never look back.

I was a bit disappointed that Snake did not come with a crowbar, partly because of the above but also because he is obviously in the set to rob the Kwik-E-Mart yet has no weapon to do it. I can understand TLG not including a gun but a crowbar would seem like a nice compromise. 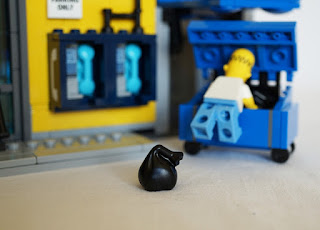 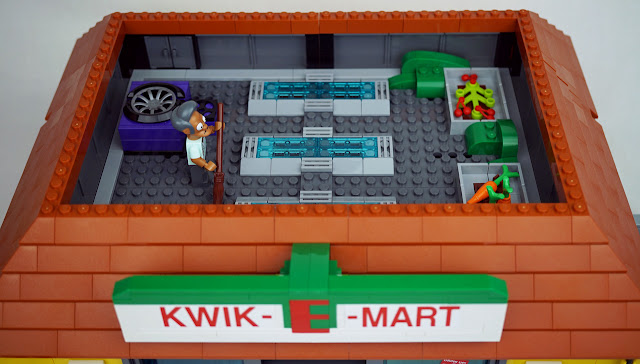 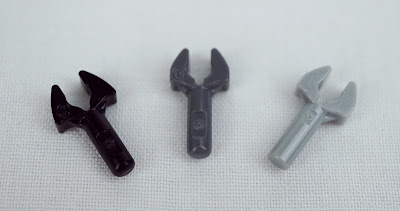 The 3.2 diameter stick with holder (Design ID 48729) has been around since 2004 but recently TLG tweaked the design again slightly to give us what is now the third major variant. When they first came out the clip was wider at the base, version two had a narrower clip and was a little less likely to crack and now we have a new version with a squared-off base on the bar. I am in favour of this as it makes inserting the piece into holes, such as on a jumper plate or binoculars, a little bit more secure. This follows a trend at TLG to square off bars when the mould is up for renewal, like the aerial (Design ID 3957). 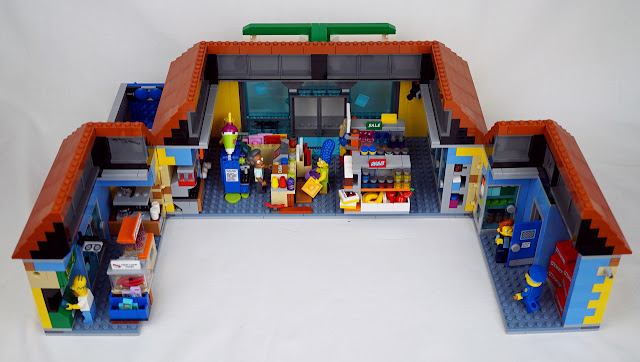 Once finished, the set looks excellent. The two back quarters fold open in a way that will feel familiar to those who owned classic Castle back in the 1980s, or indeed now. The central hidden flat roof section with Apu’s secret garden is removable to allow impressive access to the inside. 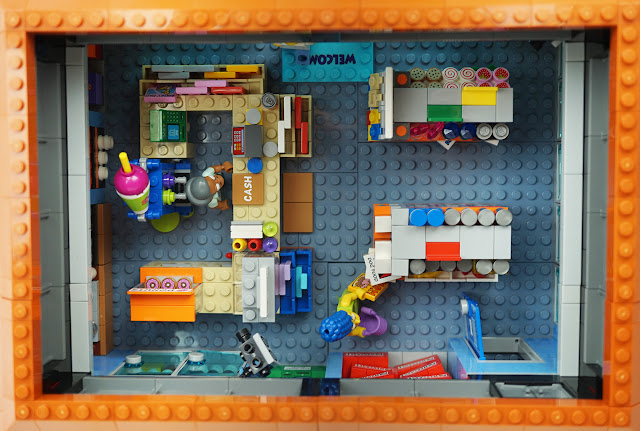 Even if you are not a Simpsons fan this is a great parts pack; lots of groceries and a nice selection in some key colours. Black, the two Greys, Blue, Orange, Yellow and of course Dark Orange are served particularly well. I’ve not told you every last detail, partly because there are so many and partly because if you have the set you will want to experience them for yourself. After all if this was a film review you would not me to give away the ending would you?

Now this is not a lending library, if you are not going to buy something, get out. And thank you, come again!

(or anything); this helps support New Elementary!