From rainforest to ocean 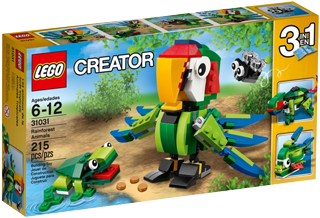 He's a Spacer, but Tim Goddard (Rogue Bantha) is also pretty darned handy when it comes to building creatures. We sent him a copy of the delightful Creator 3-in-1 set 31031 Rainforest Animals

As always here at New E we do not pump out reviews, parrot fashion. We will not be overly dwelling on the much talked-about working bodily functions of the main model in the set. We will also not be recycling cheap jokes. On with the review. 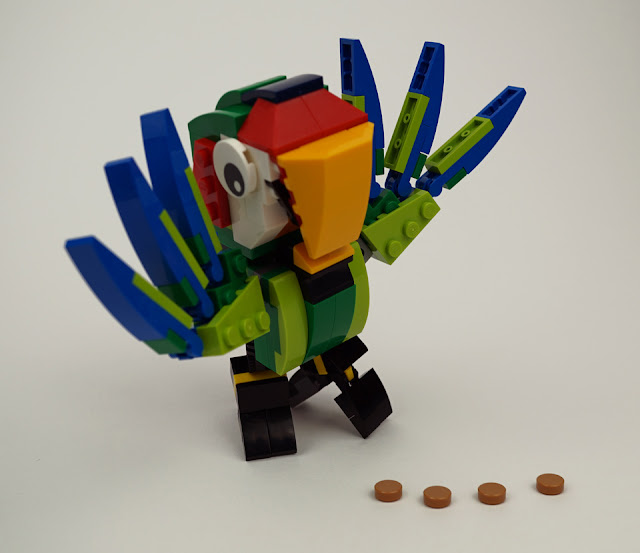 I am a big fan of building animals so when I first saw pictures of this set I was impressed and wanted to get my hands on it. It follows other recent and ever-improving animal collections in the Creator line which use the twin innovations of the mini ball and socket pieces and the printed eyes to bring creations to life.

On to the build; after a leisurely half-hour build I had completed the first of the three instruction booklets to create the models featured on the front of the box. 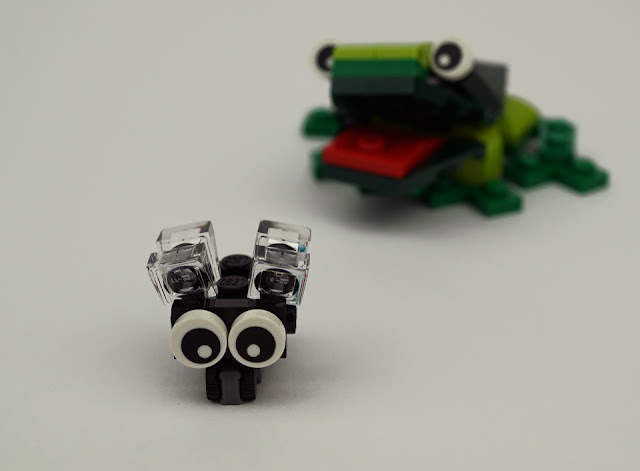 The fly is pretty fly; simple but effective. I am a big fan of the classic 1x1 plate with headlight (Design ID 4081) and it is used to good effect for the stumpy wings. If you twist the cheesy wings as much as the bricks will allow it can add a bit more character. 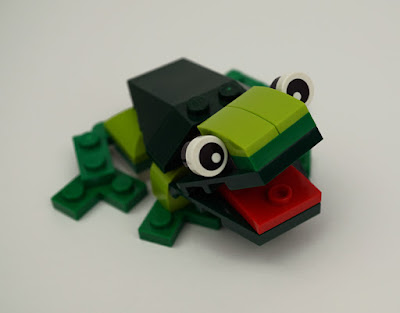 The frog, hopping rather ambitiously to eat the fly for lunch, is even cuter. The ball and socket neck joint allow him to be given an inquisitive turn of the head. Angling the feet, as in my picture, is another possible tiny bit of customisation to bring him to life. Interestingly this is facilitated by a 2x2 round plate under his chest; this plate is obviously placed there to allow the front feet to be twisted but this feature is not advertised in the official pictures. Maybe some over-officious design advisor thought it was not the LEGO Group way of building. 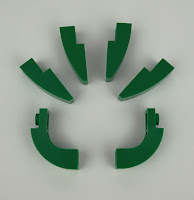 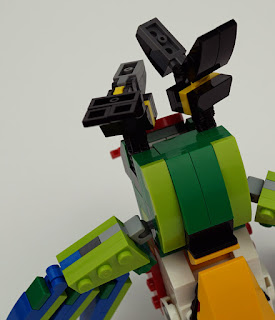 On to the main attraction, the vibrant parrot. The model uses a nice variety of different hinges, showing off each type’s strengths. Sturdy click hinges give impressive feet and legs but I was a bit surprised how easily they fell apart when folding the front or back toes upwards. (I suspect that if I had used this technique for the models I designed for DK's Ideas book series, a rebuild would have been requested by TLG at the approval stage.) Mini ball and socket joints mean that the wings have a good degree of movement at the shoulder, and three clip and bar connect feathers on each.

before, and then there was only one. In this set you get six of a part I have been wanting for a while. I am on a bit of a Space Police 1 building frenzy at the moment and last year I wanted a number of these. More proof that LEGO employees are secretly planning a revival of some Classic Space lines. (Note to editor, is this likely to start mad speculation? If so, leave it in!) 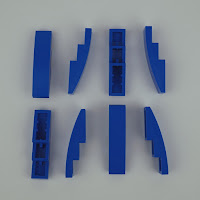 Blue can be harder to get hold of than you might think, it is one of the most underrepresented primary colours in brick. The eight bricks with bow 1x4 (11153 | 6045938) are thus also appreciated even if they have been in 10 other sets.

The macaw head folds back in a rather alarming Pez style so you can introduce the four  1x1 round tiles in Medium Dark Flesh [BL]/Medium Nougat [TLG] (98138 | 6055383) into his gizzards. Given these parts will be very sought-after as a set exclusive, perhaps it is actually a security measure rather than a play feature? They can be removed by folding the clip and bar hinged tail, in what I am sure is a humorous action to some. 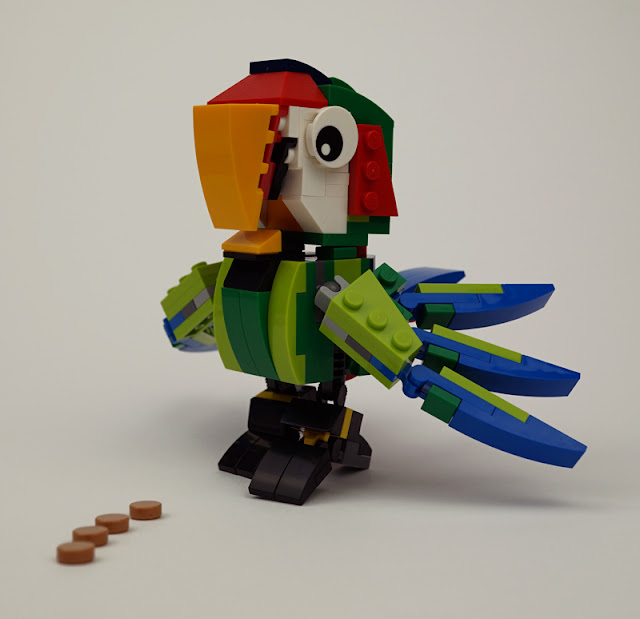 The other noteworthy thing about the head is the spinnyness of the eyes. Apparently spinnyness is not a word but I think it best describes how these eyes rotate very freely. The eyes are printed on the newer 2x2 round tile with a central stud holder on the underside (16424 | 6060734) and are connected to a Technic half-pin (a.k.a. the not-in-any-way-humorously-named ‘connector peg with knob’) which sits in a 1x2 Technic brick. This arrangement has been used because there is not yet a brick 1x2 with 1 knob (again, not funny). I am ancient enough to remember when the half-pin in a  1x1 Technic brick was a very frequently used SNOT technique because we did not have such luxuries as the brick 1x1 with 1 knob back in the day... you youngsters don’t know you’re born.

I have not built the animals from the second and third booklet, I wanted to leave something for those who buy this set. I have however built a couple of alternatives which can both be built at the same time; a very multi-coloured seahorse... 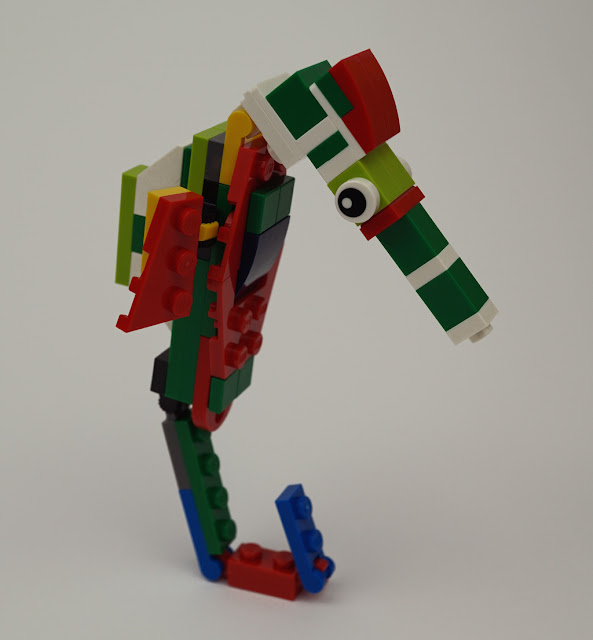 ... and a baby turtle. The nice selection of hinges and curved slopes in this set made this a rather pleasant experience. 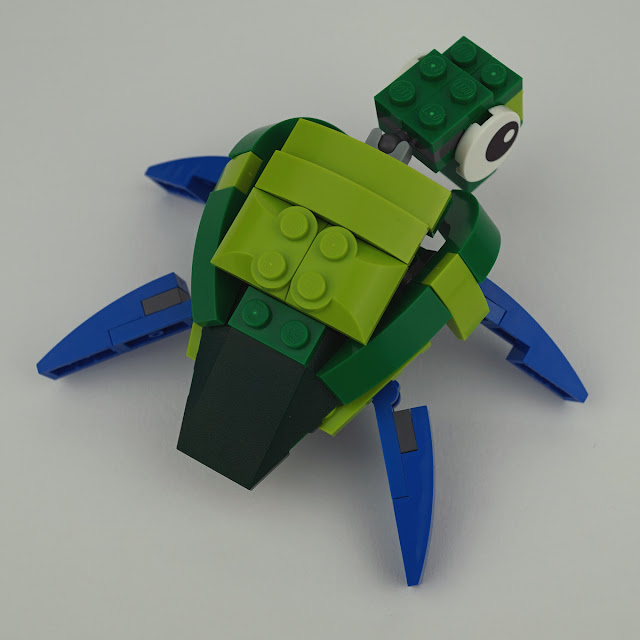 I suppose the most interesting move in these is the curve around the turtle shell, it has been achieved using the ball and sockets to add shaping rather than using them as limb joint. 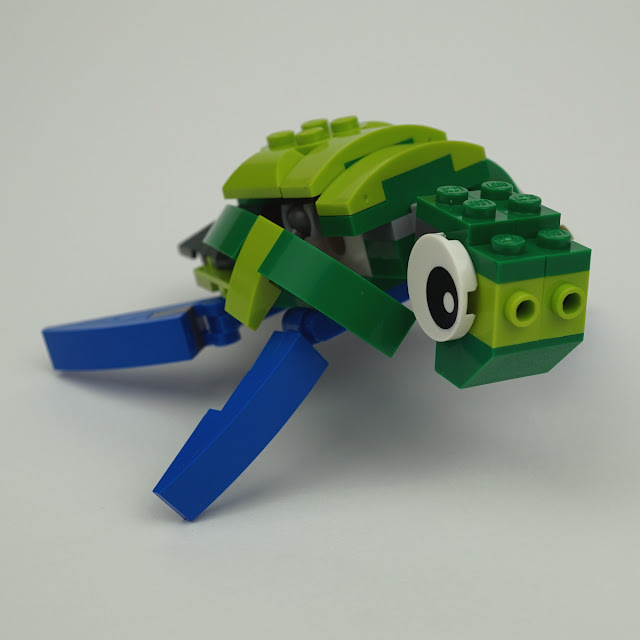 This is an awesome set, lots of character, nice brick selection and great value. A small number of new elements perhaps but some notable ones. Unlike the parrot, buying this set will leave you with a very small bill. All this writing has given me a bit of a headache, I would take some tablets but (altogether now...) the paracetamol.

Posted by: Admin Posted on 6/03/2015 08:30:00 am
Email ThisBlogThis!Share to TwitterShare to FacebookShare to Pinterest
Labels: Set review, Technique