Alexandre Campos and TobyMac complete our current run of Element Developer Q&As today as we speak to Poul A Thomsen, Mechanical Engineer at the LEGO Group, about the LEGO® Friends “hoop element” (77107). Then, Alex and Toby investigate the geometry of this new element. Transcripts were edited for clarity, readability and narrative flow. 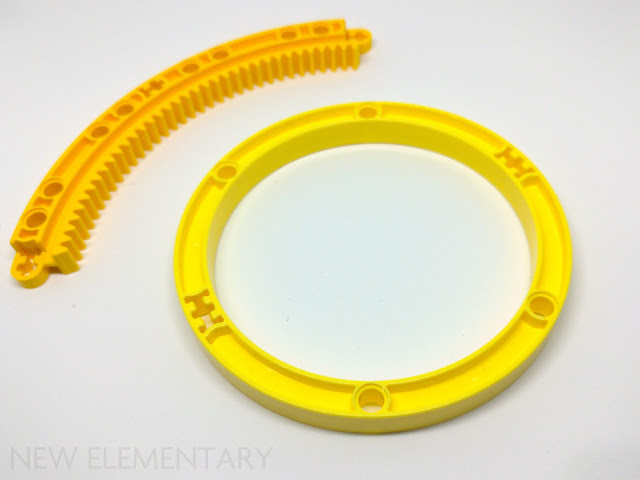 Curved LEGO Technic beams, most notably the Technic Gear Rack 1/4 Circle 11 x 11 35 Teeth (24121), aren't common, and any addition is welcome. Indeed, another "banana gear" was just revealed yesterday in the upcoming LEGO Star Wars Ultimate Collector Series 75313 AT-AT!  But today we are here to talk about the Technic Beam Round 11 x 11, revealed earlier this year in LEGO Friends. As you might guess from its name, is a Technic beam that is round and has a diameter of 11 modules. 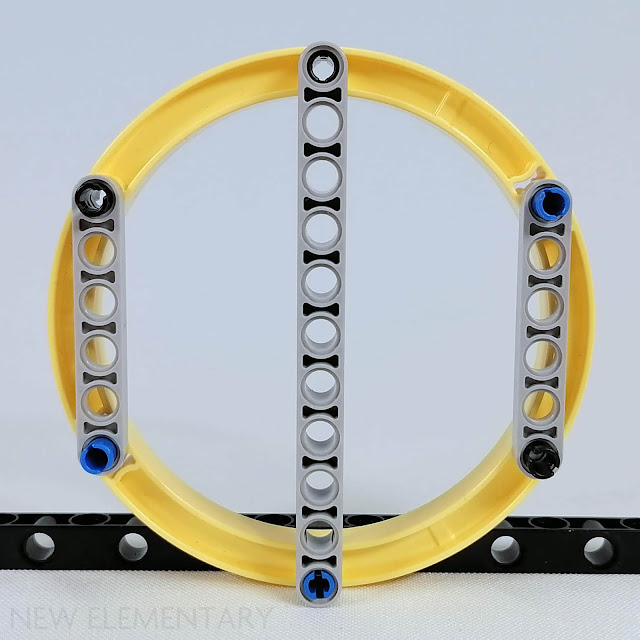 This round element has an interesting geometry, with six holes – two of them for axles and the rest for pins – evenly spread around its perimeter.

As always, many LEGO Group employees were involved in its design, production and testing. We spoke to the Element Developer, Poul A Thomsen, who took the brief from the Element Designer and passed it on to the Mould Developer when he was done.

New Elementary: Tell us about your background and joining the LEGO Group?

Poul A Thomsen: I was educated as a Mechatronic engineer and was working for a world leading electrical actuator company for 3.5 years before I joined the LEGO Group. I started out in Novelty Element Development and have stayed here – there’s no point in leaving, when you are in the best department! So far, I think I’ve designed about 70 different elements over the 6.5 years I’ve worked in the department.

Poul: Garmadon Helmet (28679) was one of the first elements I designed and was quite hard to get right from an engineering perspective. Also, the 6x12 Chassis (65634) – the design of this chassis element looks simple but was quite complex to get the mould design correct and ensure the element’s measurements remained accurate during the moulding process.

So, how were you briefed on the round beam?

Poul: The designers in the project challenged me to come up with a suitable element to match a vision they had for a future set. The initial brief was for it to be used for a fairground-themed element. It was important that it allowed for a platform to be built that did not rotate freely. Thus the cross axle hole; previously it had been researched to add a row of 3 Technic holes to create this function.

What do you personally call this new element?

Poul: I usually refer to it as “the hoop element” or “the ring”.

Does it fall into any existing element families?

Poul: The element is actually considered a beam element. Usually in our straight LEGO® Technic beam elements we have a ‘dogbone’ shape between the holes in the structure. We had to find a way to replicate the same look with a circular beam element by experimenting with the thickness of the element, which was an interesting challenge. 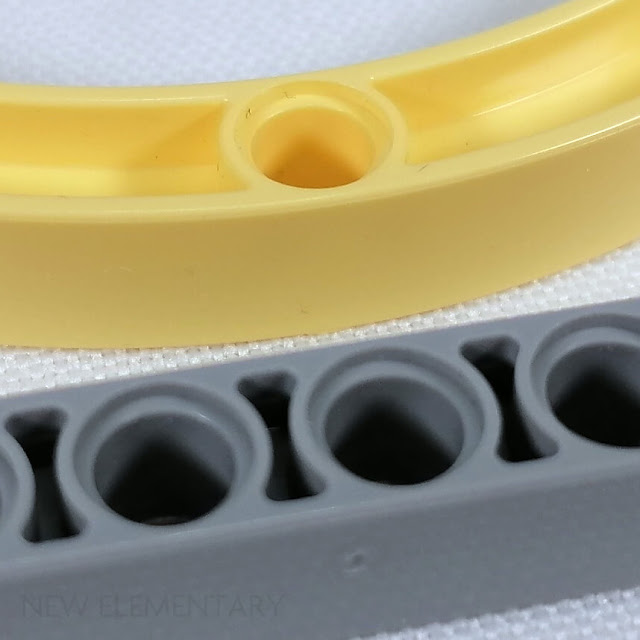 Poul: This element is made from ABS plastic. Given the material properties, I designed it with 3 gate points to make it as round as possible without going overboard with 6 inlets or so! – as only one or two inlets would have resulted in an oval element.

What testing was undertaken?

Poul: This element underwent the thorough product quality and safety tests that all LEGO® elements need to pass. The element was also measured and function tested to make sure the play value was as intended.

Did any issues arise during production?

Poul: Initially the element was extremely hard to get out of the mould and several initiatives were needed to ensure we could push it out without damaging the element.

Poul: I wish there was a way to decrease the number of pin-ejectors that were needed in the end, perhaps by using flat ejectors. 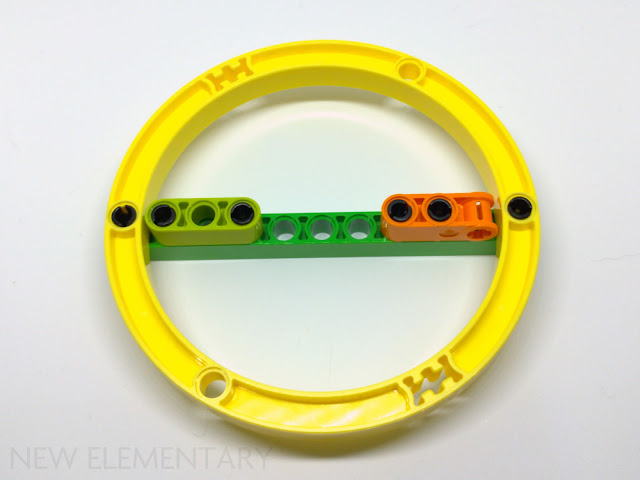 The beam's rim is thin enough to allow other beams to be mounted inside it right next to its inner surface. Even parts with a square profile, such as the orange connector in the image above when mounted as shown, have no problems with the beam's inner curvature. 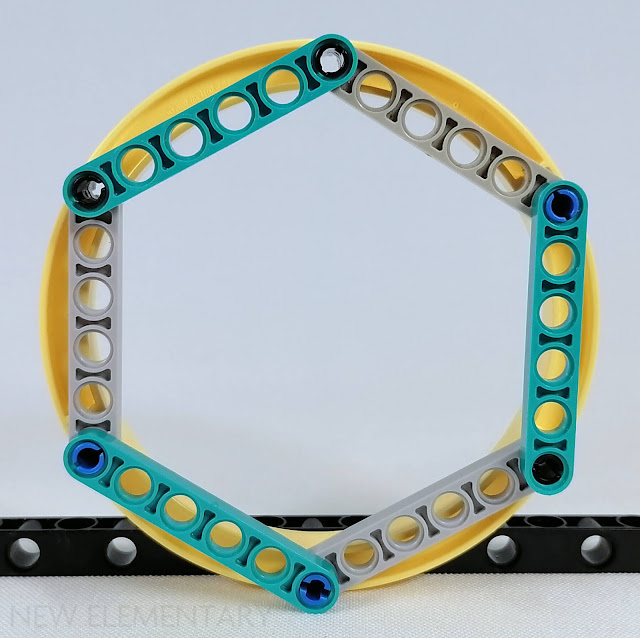 The distance between each pair of holes, interestingly, fits within the LEGO System, and is exactly 5 modules. This means you can use it to form a hexagon from six Beams 1 x 6 Thin, and build up from that. 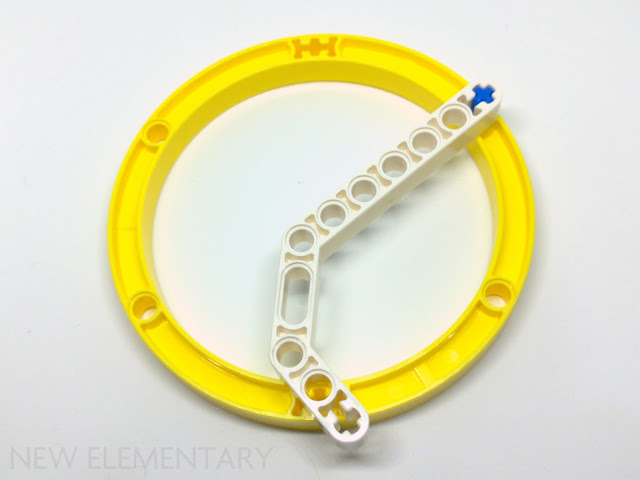 I tried to find other simple in-system connections between two non-adjacent holes, but this is the closest I managed, and the holes don't line up well. 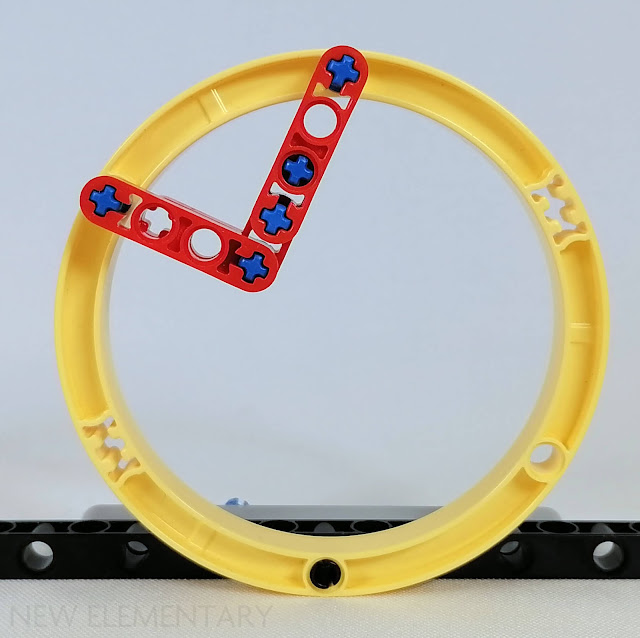 Since the distance between two adjacent holes in the beam is 5 modules, we can apply here the 3-4-5 Pythagorean triangle, the smallest possible using integer numbers. 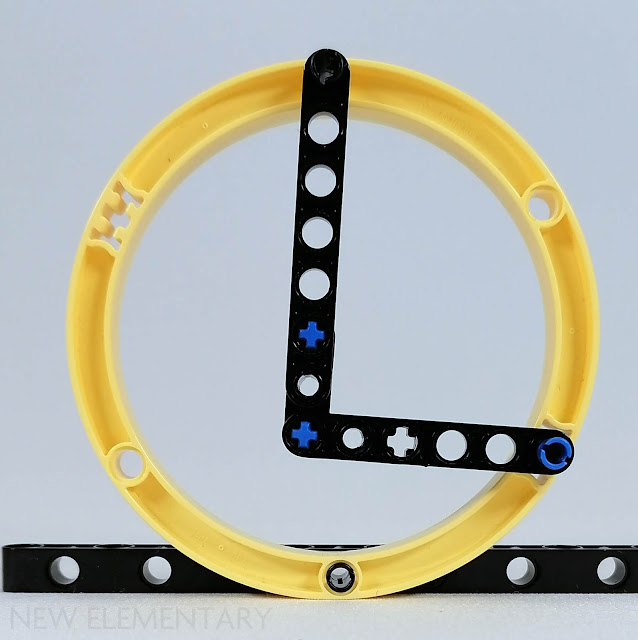 While no single element can join two non-adjacent and non-opposite holes, more complex assemblies can. This is such an example: an L-beam with 8 holes on one side and 6 on the other. 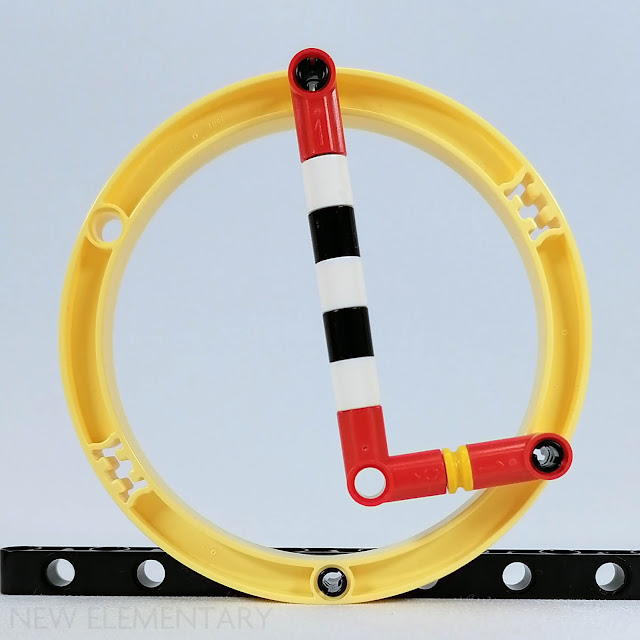 If you're willing to make use of half-module offsets in your build, a few more possibilities open up. Given the crazy MOCs people come up with, I'm pretty sure someone sometime will take advantage of this unusual geometry somewhere.

Despite having so far appeared only in sets in the System-based Friends theme, this beam was clearly designed to interact with Technic elements. This can be seen by the part's dimensions being close to, but not exactly the same, as other curved System pieces.

So, what usages can we expect to see of this mould in Technic models? 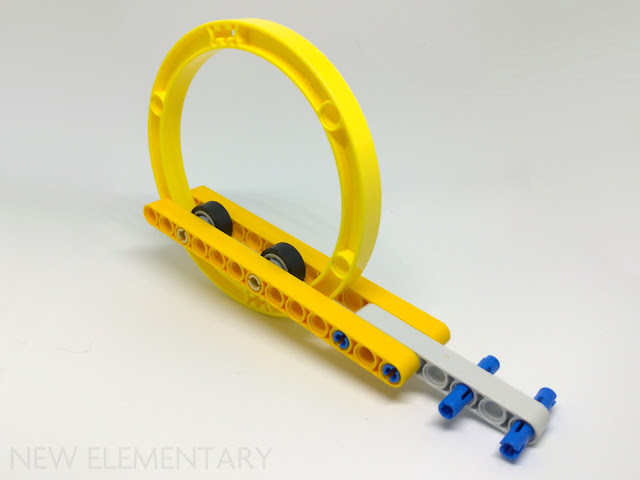 One of my first thoughts was a hubless wheel for a futuristic vehicle. The vehicle's structure rests on the beam via two small wheels, which may be powered to motorise the model. Two problems arise with this contraption, though: the round beam is held in place by the weight of the vehicle; if you lift it, this "wheel" comes loose, and putting a third small wheel on the opposite side of the beam defeats the hubless look. The second problem is that the outside of the beam isn't rubberised, which makes traction very low. 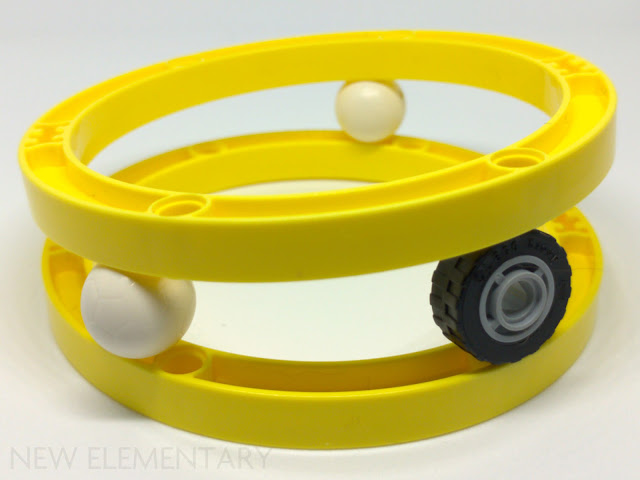 Another possibility would be to use a pair of these as a bearing, with the help of either balls or wheels. I can confidently exclude the first option, because there is nothing in the beam to keep the balls from falling out: the groove on its surface is interrupted by the holes, as the image above shows. Using properly secured wheels, like what was done in 42082 Rough Terrain Crane with "banana gears", is more doable, but the groove reduces the area of contact with the wheel and concentrates the wear and tear on its edge. 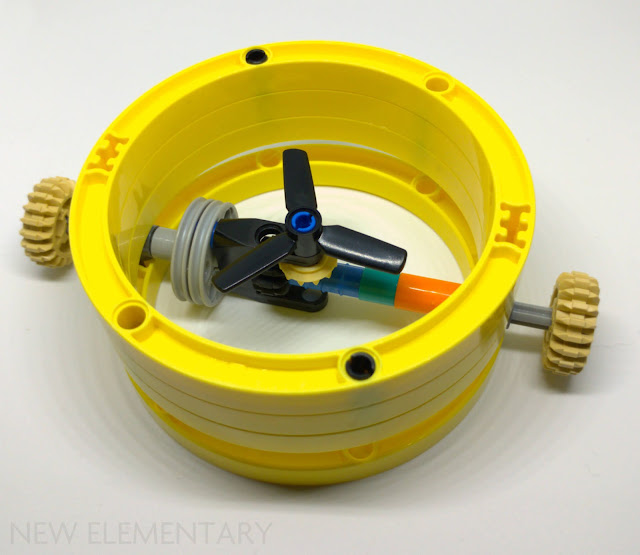 The usage I feel is more likely to happen in future sets and MOCs is as a shroud for a ducted fan. In an assembly such as the one above, it's possible to spin the Propeller 3 Blades 5 Diameter via the rightmost 20T gear, and orient it via the leftmost gear. For an effect similar to the one used in 8839 Supply Ship, you'd keep that gear fixed to maintain the orientation of the propeller, and rotate the shroud around it instead. 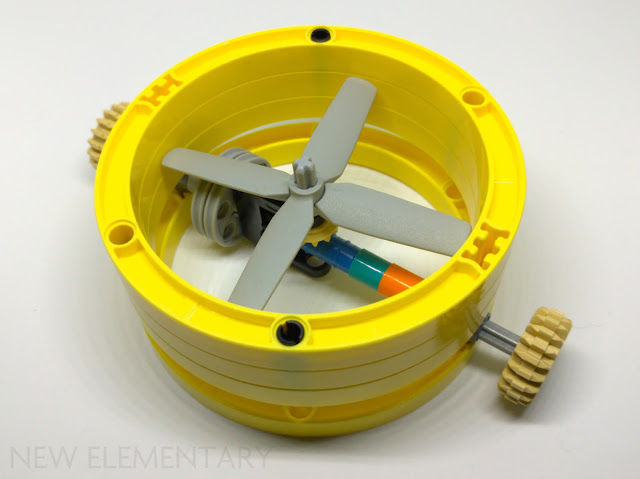 However, a propeller with a diameter of 5 modules looks ridiculously tiny inside such a large duct. If you want to sacrifice orientability, 9 modules of diameter, such as with the two two-bladed props shown, looks a lot better; I wouldn't be surprised if, during development of the round beam, it was tested to confirm that it worked well with these propellers.

EDIT: Reader Jimmy asked if you can wrap a nice even number of tread links around the ring beam. 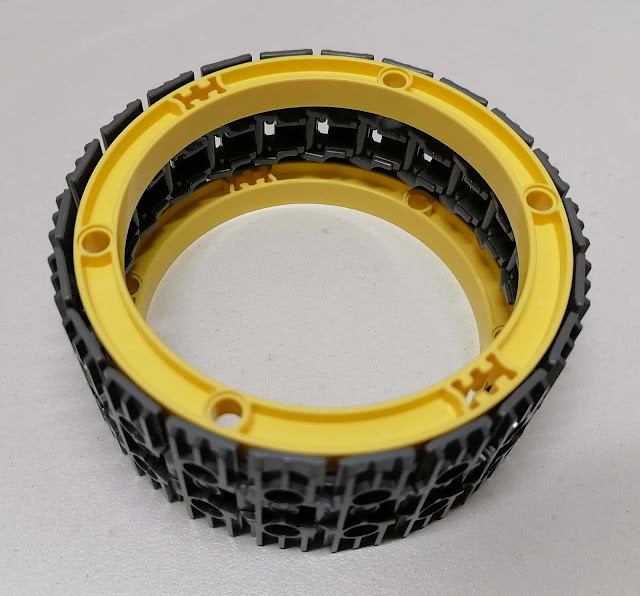 TobyMac has explored this; the beam is just a little too wide to fit in the centre of the treads. You can fit 22 threads if you place the ring on the edge. It's a loose fit, but if you use a ring on each sides and connect them together, they will stay in place. 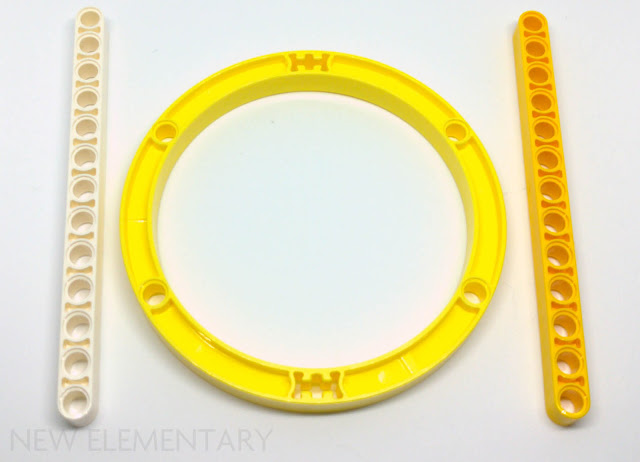 As of writing this, Technic Beam Round 11 x 11 is available in a single colour: Bright Light Yellow (6335786 | 77107), halfway between white and regular yellow. While this choice of colour makes sense in the Friends sets it appeared in, for Technic usage I dislike it a lot. I'm always of the opinion that new moulds should first appear in common colours (preferably neutral ones like grey or black), where it's easy to integrate them with existing parts, and only afterwards become available in other, more "exotic" colours as specific usage requires. As far as I remember, there are no Bright Light Yellow Technic sets, so the number of moulds in this colour is similarly scarce. This makes using this element in a Technic model hard without making it stick out.

As mentioned, the upcoming UCS AT-AT will include quarter-circle gears that match the Friends hoop. This will make it an even more valuable element! And if you're a fan of LEGO Znap (and let's face it who isn't?) the Friends hoop is bound to make your day: 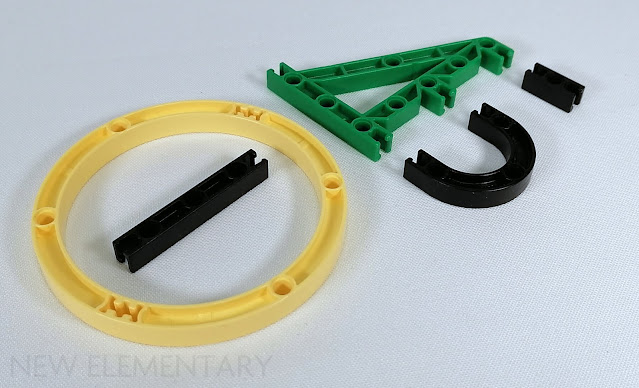 This was our final Element Developer Q&A for the time being, we hope you have found them valuable. New Elementary would like to thank everyone at the LEGO Group who have assisted with the production of this series: Niels Bundensen, Jordan Paxton, Sara Skahill and of course all of the Element Developers!

Posted by: Admin Posted on 11/10/2021 10:21:00 am
Email ThisBlogThis!Share to TwitterShare to FacebookShare to Pinterest
Labels: Inside LEGO, Interview, Technic, Technique