Our next 2021 LEGO® Technic review comes from Omid (@nwbricks) who takes 42124 Off-Road Buggy for a spin. Buying this set when it is released on 1 January 2021? Consider using our affiliate links: USA LEGO Shop at Home|UK LEGO Shop at Home. New Elementary may get a commission. The products in this article were provided for free by LEGO; the author's opinions are not biased by this. 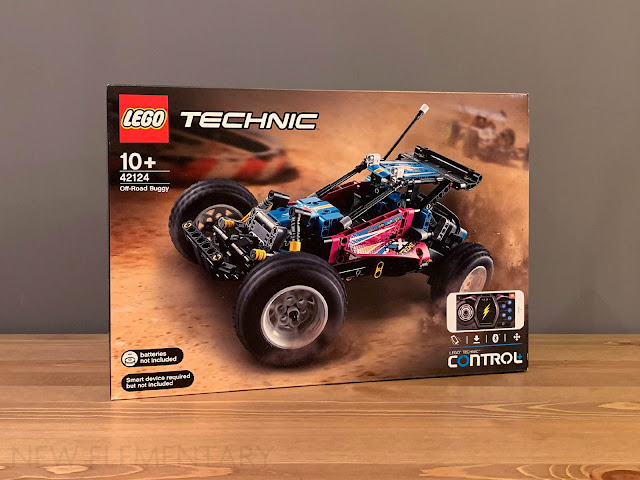 There’s a lot to digest here including plenty of new and unusual parts, Control+ elements and the accompanying app – so let’s get stuck in! 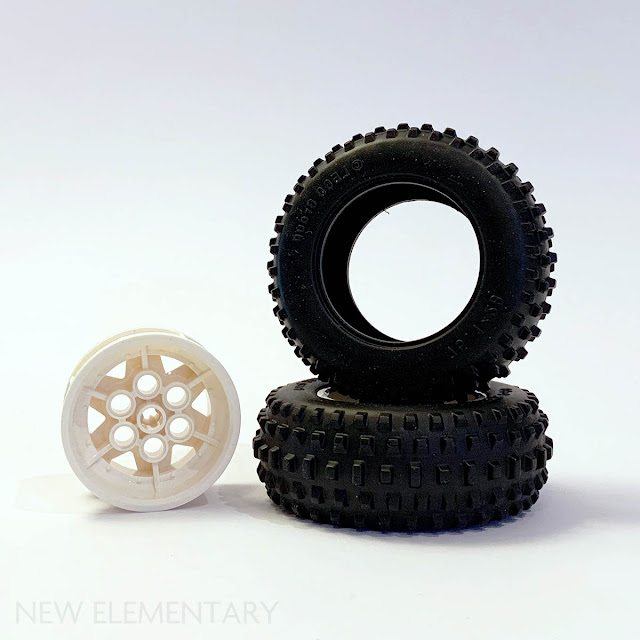 The hubs are recolours of Wheel 43.2mm D. x 26mm Technic Racing Small, 6 Pin Holes (56908) available for the first time in White (6331047) – but right off the bat, the first thing that screams BUY ME are those fantastic chunky, knobbly tyres, which are fresh off the production line.

I suppose this will be called something like Tyre 71.6 x 26 Technic, Knobbly (69909 | 6321710). I like it. Let’s be honest, nothing will ever quite compare to the iconic Power Puller tyres, but this stacks up nicely against the current offering of Technic rubber. “About time” was my first reaction; to be honest it’s hard to imagine this model working with anything else. 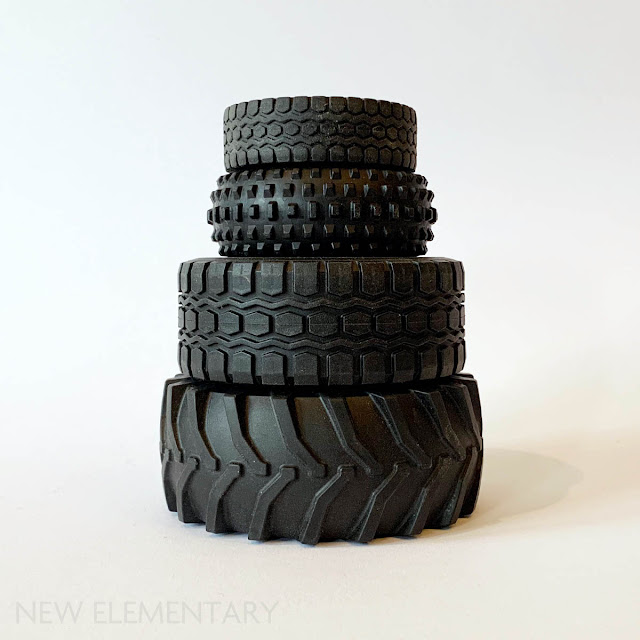 We’re also treated to a tasty new flavour of beam: Technic Liftarm 1 x 15 with alternating pin holes (71710 | 6321716). This one feels like a bit of a game-changer; ever since I was a kid I  recall coming up against the problems this element solves. Serious Technic nerds will no doubt be getting excited right about now.

Not strictly new to this set but seen in only two other 2020 sets so far is the spanking new compact Technic Gear Differential Housing in Medium Stone Grey/ Light Bluish Gray (65414 | 6285647) and accompanying driving gear, Technic Gear 28 Tooth Double Bevel with Pin Hole in Bright Red/ Red (65413 | 6285646). As someone whose entire armchair understanding of mechanics was gleaned from asking far too many annoying questions as a kid, this gear housing is a really neat evolution of a fundamental element. 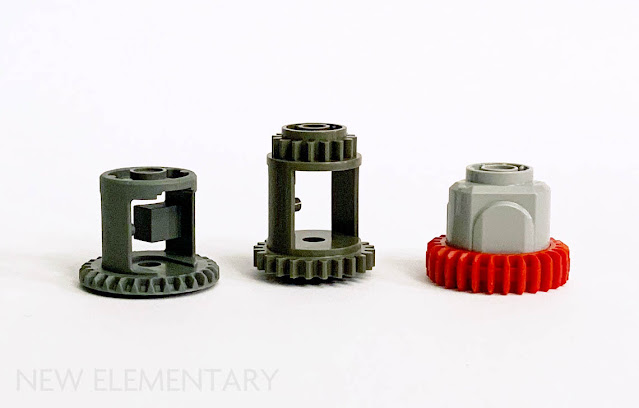 Again, I’m sure there are some hardcore Technic builders absolutely losing their heads over this. I didn’t quite lose mine so much as spent a good two minutes scratching it, before realising you’re meant to put 5 of the small tan bevel gears in, not 4. Bonkers! But really, really cool. 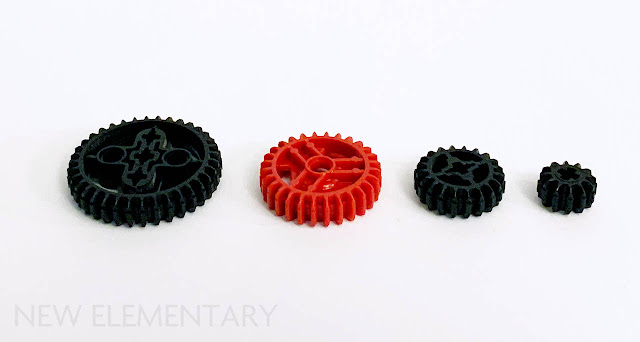 The fat 28-tooth ring gear has the same profile as the existing 28-tooth double-bevel Technic gear (46372) but out of necessity has a pin hole rather than an axle. It clips into those three tabs on the housing, securing the fifth smaller gear in place beneath it. The housing itself has a really interesting profile that could potentially be used for some clever non-Technic applications.

It’s always interesting to see different takes on the same problem — there’s even a couple of other variants too from over the years. Explaining how a differential works is slightly beyond the scope of a LEGO review, so I’ll defer to this great Chevrolet film from 1937 that breaks the concept down nicely. 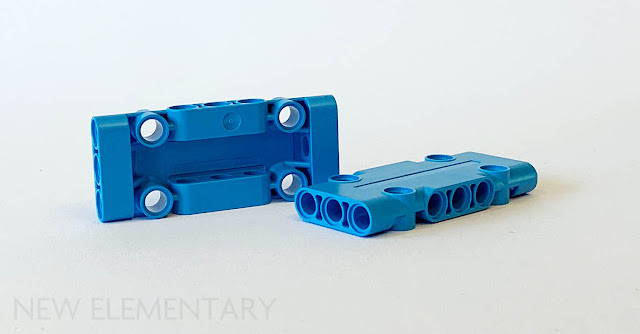 Next up is a new panel mould, Technic 3 x 7 x 1 in Dark Azure (71709 | 6331049). Alexandre Campos introduced us to this part in his recent review of the 42122 Jeep Wrangler, where it appears in both yellow and black. It’s a welcome addition to the lineup of Technic panels and I’m sure we’ll be getting a plethora of recolours in future.

The build process for this model is pretty straightforward, with under 400 parts across 5 assorted bags. The subtle differences between the packaging of System and Technic sets always intrigue me; it’s becoming more and more common for even the smallest System builds to have numbered bags (even those swept up in the new 18+ branding) whereas Technic seems to have a higher “no numbers” limit; even this set which is  marketed as only 10+. 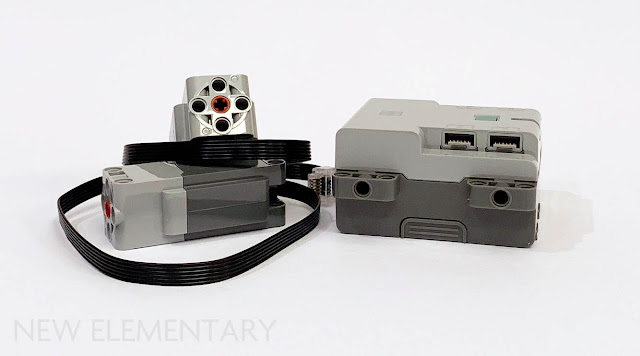 The new Control+ elements are where most of your money goes, and while I secretly miss the old line of studded 9V motors there’s no denying these are pretty nifty. Their ability to report position and speed back to the controller is awesome. 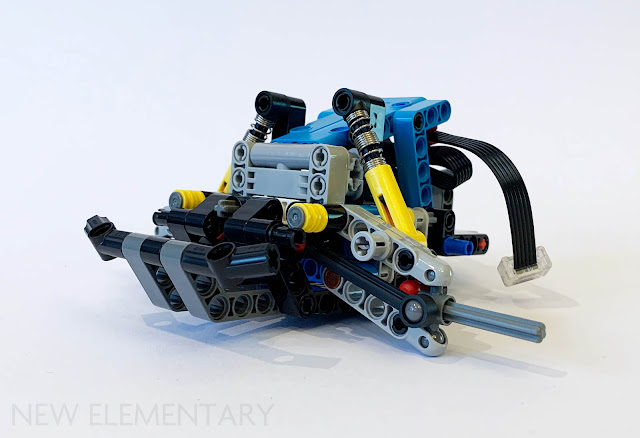 The build starts at the front of the vehicle with one of the motors utilised for the steering. The entire front assembly feels really compact and sturdy, and no matter how old I get I’ll never stop loving LEGO shock absorbers. 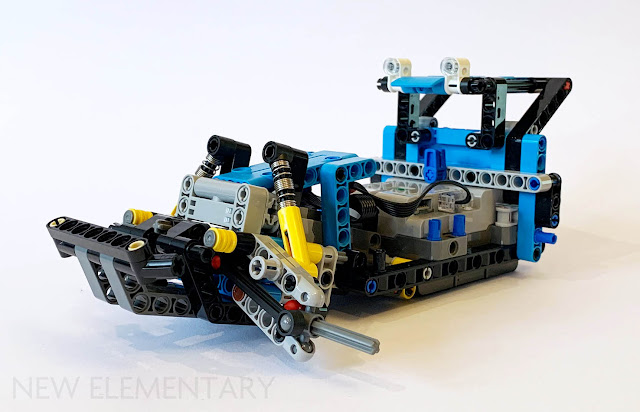 The hub slots into the chassis nicely and when filled with batteries gives the whole model a low centre of gravity. Thankfully the battery compartment is easily accessed from the underside. 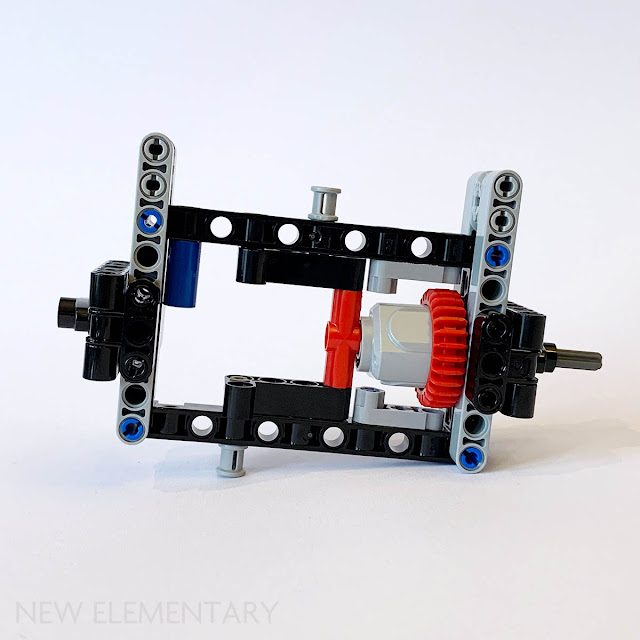 The new differential housing can be seen in place here; a marked difference from the older, simpler versions that felt  almost ubiquitous on big Technic vehicles from the last 40 years. 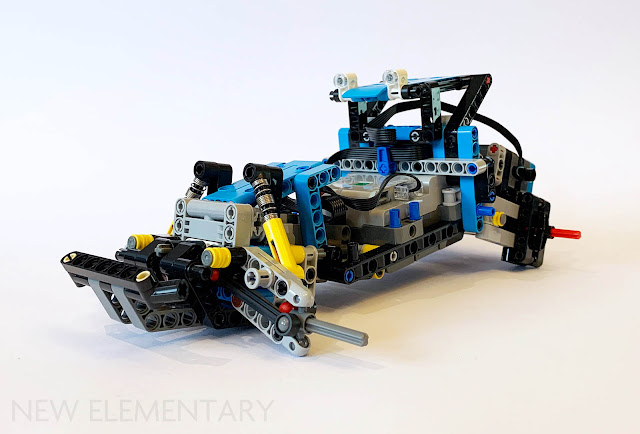 Bolting the rear assembly onto the chassis really brings the model to life, and I’m happy to report I got the same “can I put the wheels on yet?!” feeling that all good sets evoke. 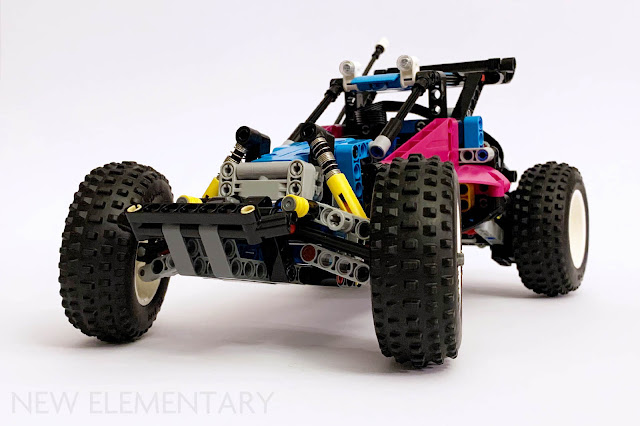 And it’s fair to say the completed model certainly looks the part! Classic RC styling shines through, and the addition of the fake antenna is a really nice touch. I deliberately avoided adding the stickers. 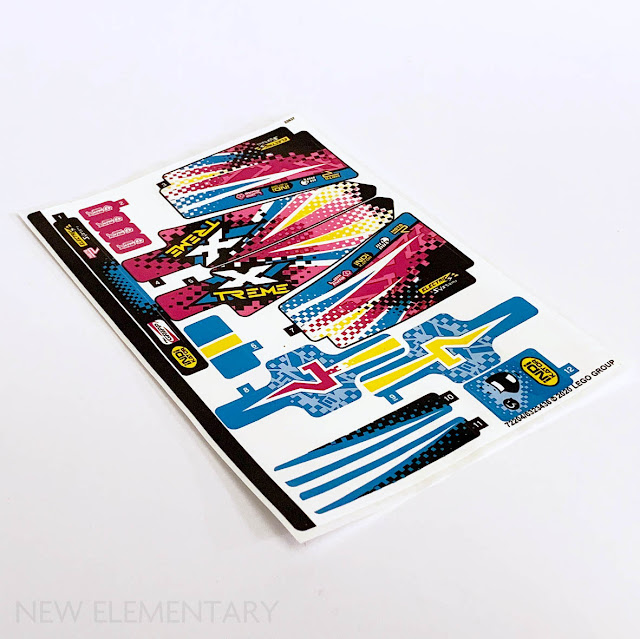 There’s an argument that lots of the bigger Technic models are really more display pieces than anything; certainly I had the 42009 Mobile Crane and 42043 Mercedes-Benz Arocs 3245 on display for the best part of 4 years. The same can’t really be said for these remote control offerings however, with relatively low piece counts and a huge focus on playability thanks to the Control+ app. 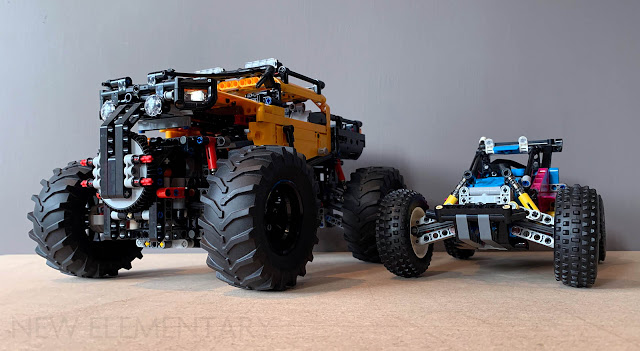 Now back in my day, when phones had buttons and teachers confiscated things, you could write a text message in your pocket and no-one would be any the wiser. Try doing that today with an iPhone and you’ll end up ordering a takeaway or ringing the police. Even when you’re typing a message, you have to be looking at the screen constantly to see what you’re doing.

Which is a roundabout way of saying it’s more than a little frustrating using the Control+ app. I first encountered it a year or so ago with the 42099 4x4 X-Treme Off-Roader, and unsurprisingly it’s not been improved, mainly because it can’t. This is nothing to do with the app itself, which works fine – it looks cool, calibrates quickly, and generally does what it says on the tin.

But you can’t use it without looking at the screen, because your thumb will slide off the tiny control wheel. And if you can only look at the screen, you can’t see where you’re driving the vehicle. And my phone kept thinking I was swiping in from the edge and pulled in the notification drawer. Thin glass rectangles do not good controllers make. 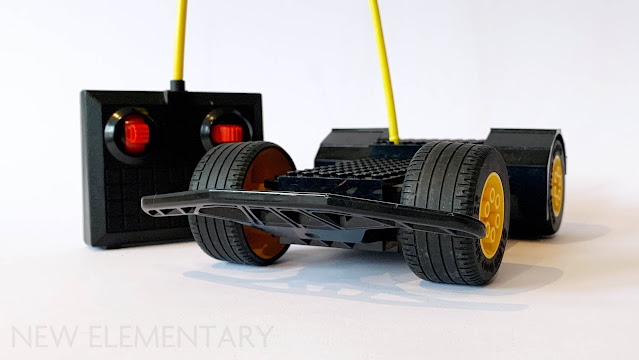 There is definitely a place in the LEGO universe for RC models and this has been proved time and again. There’s a whole host of excellent offerings: take 1998’s fantastic 5600 Radio Control Racer, or the early 2000s lineup that gave us the legendary buggy motor, or the more recent 9398 4x4 Crawler.

But all of those had controllers. With a tiny, virtual pad it is impossible to quickly snap the steering from full-lock to full-lock in the same way as “proper” sticks — and you are forced to hold the phone in an irritatingly specific way. The problem is even worse on larger devices like the iPhone Pro Max or Galaxy Note. If you really want to get the most out of this set I’d highly recommend using a third party app to get a gamepad to talk to the hub, such as Brick Controller. It takes a few minutes to set up the profile but it’s well worth it to use a PS4 controller!

These days most of my building time is spent working on my LEGO town, but until fairly recently Technic was pretty much all I built. I got a good start as a kid, with the 8479 Barcode Multi-Set from 1997 being one of my all time favourites, followed closely by classics like the 8459 Front End Loader and 8286 3-in-1 Car (thanks for the metal hook, Mum!).

All of that is to say: Technic has a special place in my heart and I firmly believe there’s no better way to teach kids about engineering principles, motors, gearing, forces, physics and any number of other problem-solving challenges than getting them playing with LEGO. Technic only serves to hone those skills. So there’s perhaps a debate to be had here that abstracting everything away behind a fancy bluetooth hub is depriving kids of a more fundamental understanding of electronics and mechanics, one that can only come from tactile play. 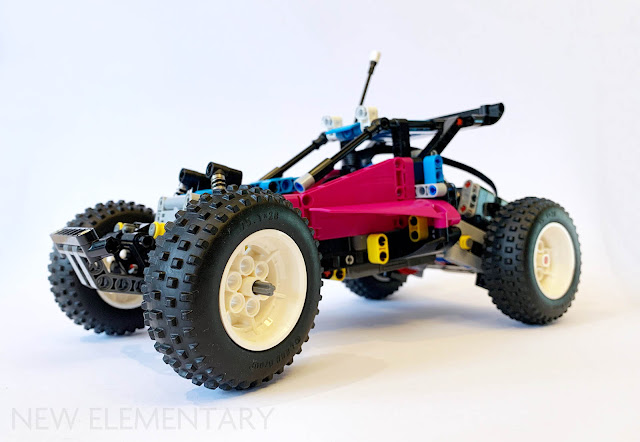 That being said, I do really like this set: it looks great and the new tyres and other parts are fantastic. On a technical level, the app works fine and perhaps for smaller fingers the virtual controller would be adequate.Sure, it’s possible to get a Bluetooth gamepad working to control the set, which instantly makes the experience a lot more entertaining - but we shouldn’t have to jury rig a controller via a phone and a third party app to do that. I dug that old RC chassis out with the intention of taking a couple of comparison shots — then ended up spending a good fifteen minutes driving the 22-year-old set around my living room. It’s just way easier, faster and more FUN with physical joysticks — a dedicated Control+ pad would make an already fun set immeasurably better.


All text and images are © New Elementary unless otherwise attributed.
Posted by: Admin Posted on 12/18/2020 10:17:00 am
Email ThisBlogThis!Share to TwitterShare to FacebookShare to Pinterest
Labels: Set review, Technic