There are new LEGO® accessory packs featuring minifigures being revealed today and Erik H.  from HokayBricks is here to talk you through them, starting with set 40418 featuring characters from the Marvel Super Heroes universe. (Tomorrow: Harry Potter!) These sets are released 1 June 2020 and Brickset estimates they will cost US$12.99/£11.99 but this is unconfirmed. 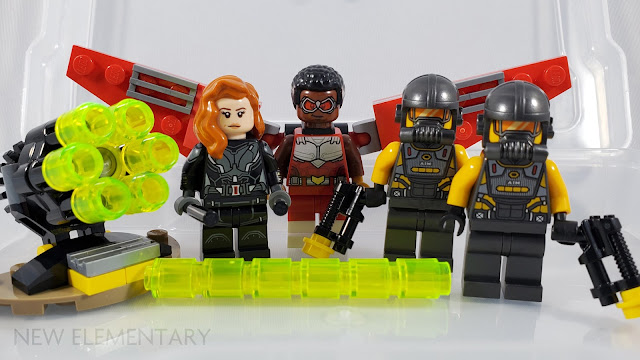 This accessory pack includes four minifigures and the pieces and instructions needed to build an energy turret stud-shooter - or in this case, a cylinder-shooter. The build is simple but effective. It includes two full sets of six Transparent Fluorescent Green/ Trans-Neon Green 1x1 round bricks. The build does not include any new or exclusive parts, but the minifigures do! 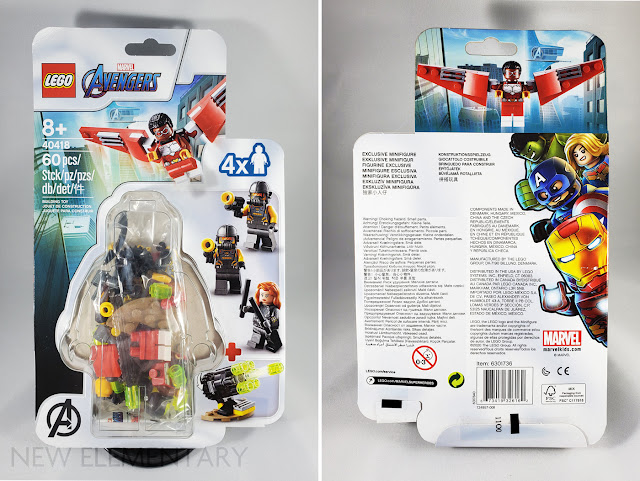 The set features the updated packaging style that was first introduced in 2019. My assumption is that this packaging style is more cost-effective and the minifigure clamshell makes the set stand out more compared to previous iterations. I also imagine this change was made with The LEGO Group's planet promise in mind, as the back of the package states it is made from responsibly sourced materials.
The front of the package shows off its contents: four minifigures and a small turret build (more on these later). The back of the package features the set's exclusive minifigure, the Marvel Super Heroes box art used on most other 2020 sets, and plenty of legal mumbo jumbo. 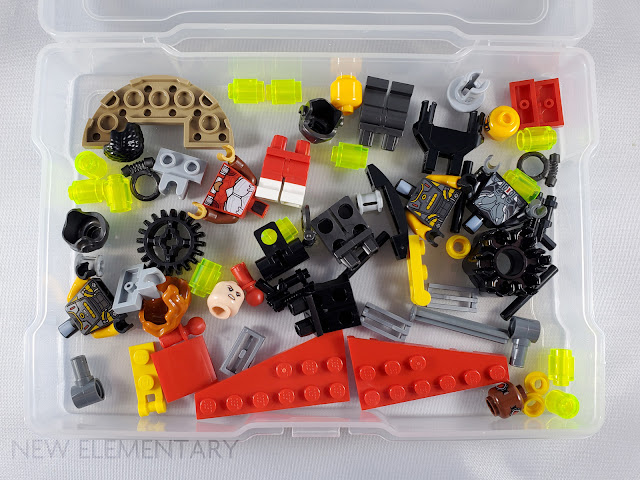 The star of this set is the new and exclusive Falcon minifigure. This minifigure appears to be an updated version of the one included in 76018 Hulk Lab Smash (2014), which was based on his appearance in Marvel comics dating back to the 1960s. 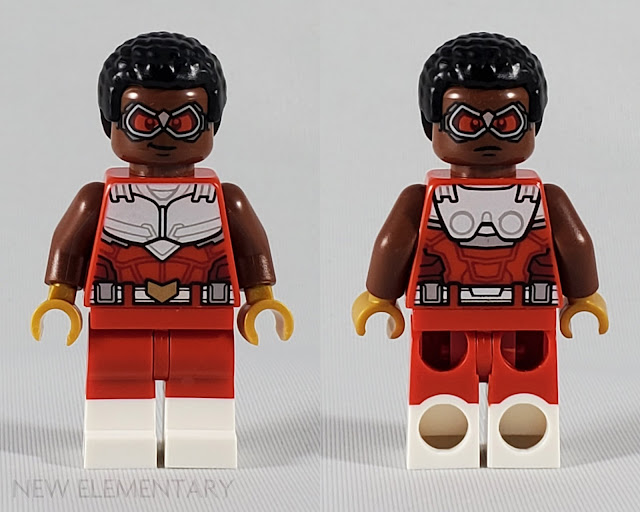 The head is Reddish Brown and features two new prints - one smile/smirk, one frown. Though the rest of this minifig calls back to Falcon's comic appearance, the face prints remind me more of the two previous Marvel Cinematic Universe versions of Falcon which featured goggles rather than a mask.
The torso is reminiscent of the 2014 version, but features more line detail, a revised belt design, and Reddish Brown arms rather than Red. 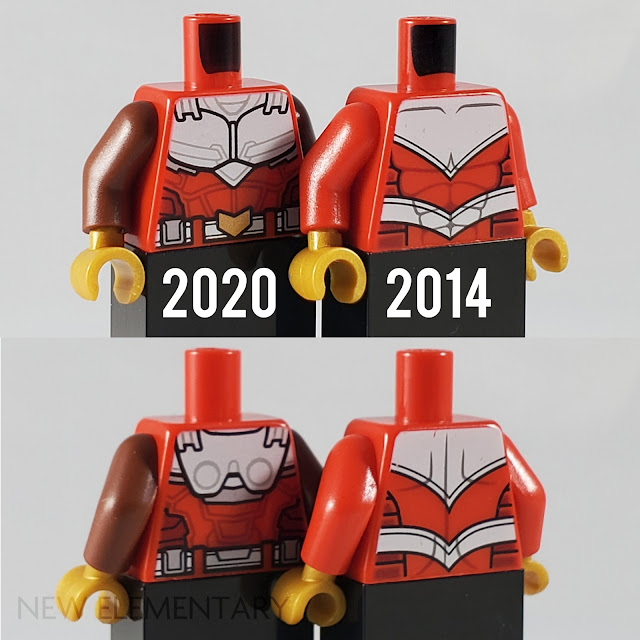 This is the first time that dual-molded Bright Red/Red with White combination legs have been released unprinted. They were previously available with printing in the Captain Hook Disney Collectible Minifigure from 2016.
The wings assembly is rather simple, but I think it suits the minifig well. None of the parts are new or exclusive. 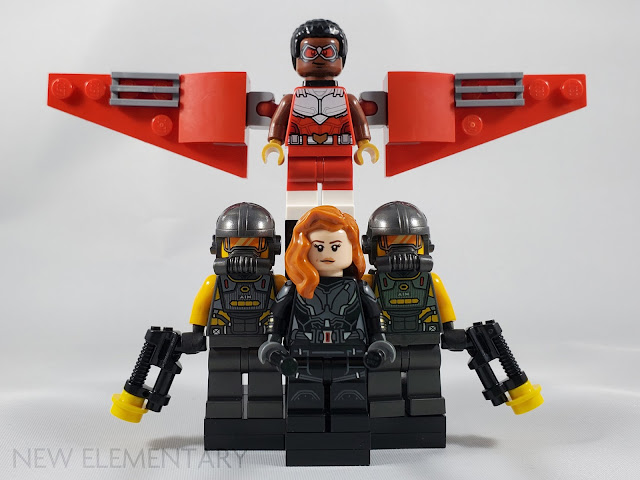 The AIM Agent minifigures in this pack use the same Flame Yellowish Orange / Bright Light Orange head and torso, and Titanium Metallic / Pearl Dark Gray legs as those from the early 2020 wave of Marvel Super Heroes sets based on the upcoming (but delayed) Square Enix "Marvel's Avengers" videogame. The unprinted legs are by no means exclusive, but they were just introduced in 2017 and have only been available in a handful of sets so far. The breathing apparatus is currently exclusive to the 2020 Marvel sets in Titanium Metallic, though the aviator cap has been available in this color since 2015. Neither the Black guns nor the Bright Yellow/ Yellow open studs are new or exclusive.

This Black Widow minifigure is new for 2020 but will also be available in 76153 Helicarrier later this year. It shares the same Light Nougat / Light Flesh head and Dark Orange hair as the MCU version from 76162 Black Widow's Helicopter Chase (2020). The torso print is highly detailed and is one of only a handful of Marvel minifigures to feature both arm printing and leg printing!

This accessory set is a must-buy for any LEGO Marvel Super Heroes fan who wants a complete minifigure collection! The low price point makes this an easy addition to any fan's shopping cart, and compared to previous Super Heroes accessory packs I would say it holds up as a good value. The exclusive Falcon minifigure is the main draw of the set, but the Black Widow minifigure will now be much more attainable to young Marvel fans and the AIM Agents will surely please the army-building fans out there.
Something that still leaves me curious, however, is the Falcon minifigure. As was mentioned previously, aesthetically it seems to be an update to the character's comic book appearance, but it is being sold in a set tied to the Square Enix "Marvel's Avengers" videogame. It's probably safe to assume then that this design is not based on the upcoming Disney Plus "The Falcon and the Winter Soldier" television show. If this Falcon is indeed based on his videogame appearance, it would be not be the first time that a minifigure has spoiled the appearance of a character coming to the game. Other characters whose minifigures suggest an appearance include Hawkeye, Black Panther, War Machine, Nick Fury, Captain Marvel, Loki and M.O.D.O.K.
I'm excited to see if LEGO will continue putting out licensed character packs like these in the future, as they're an affordable way to source more minifigures and it gives the creators more license to have fun with the character inclusions.
READ MORE: There's a Harry Potter minifig pack too

Products mentioned in this post were kindly supplied by the LEGO Group. All content represents the opinions of New Elementary authors and not the LEGO Group. All text and images are © New Elementary unless otherwise attributed.
Admin: Tim Johnson Posted on 5/18/2020 01:00:00 pm
Email ThisBlogThis!Share to TwitterShare to FacebookShare to Pinterest
Labels: Minifigures, Set review, Super Heroes