Unfortunately, the set doesn't bring any moulds that we haven't seen previously, I was especially hoping to get a few of the new Double Beveled 28 Tooth Technic Gear (Design ID 46372) created for SPIKE Prime and appearing in the 10269 Harley-Davidson Fat Boy, but no luck here.

While there are no new moulds in this set, there are a few welcome new colours for existing parts. 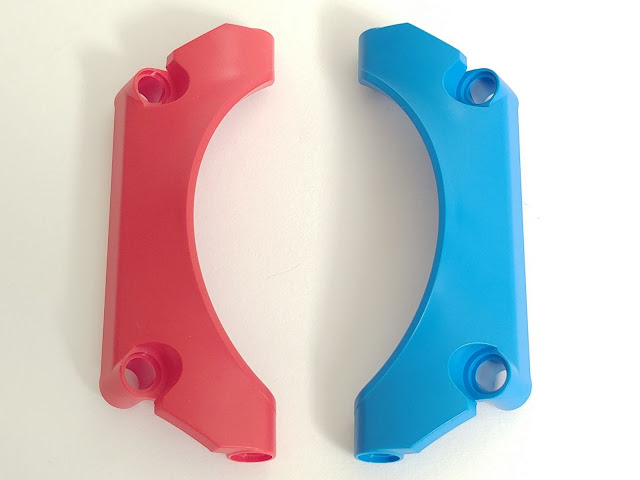 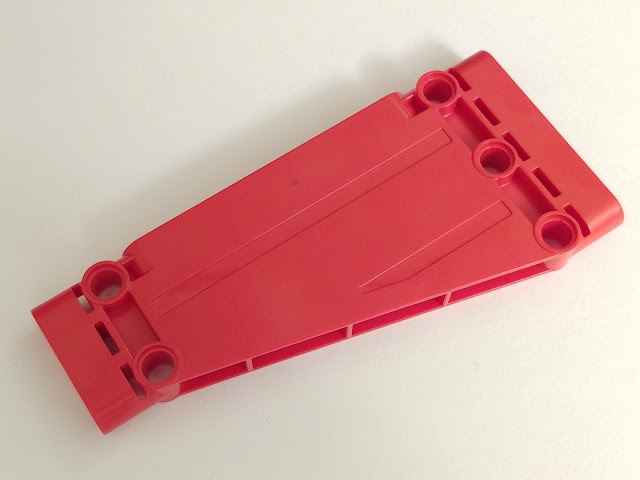 The other novelty is Bright Red for the Panel With Angle 5X11 (Element ID 6258093 | Design ID 18945). This part doesn't come in many colours yet, and such a common one is welcome. The set includes four of these. 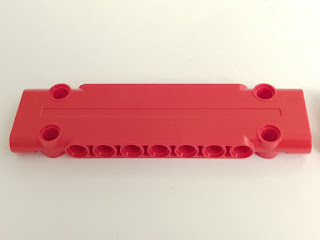 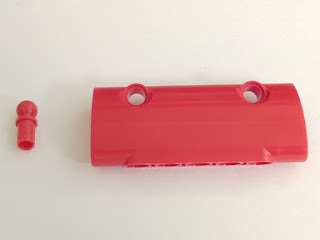 More than new moulds or recolours, this set is notable for including many rare elements, some of which appeared in very few sets. Such notable parts in Bright Red are these: 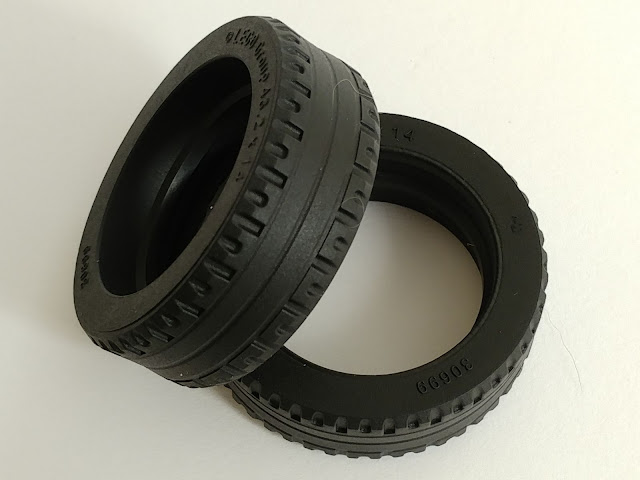 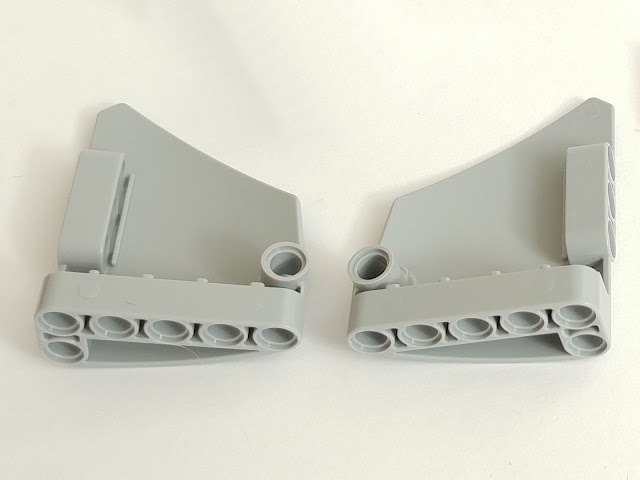 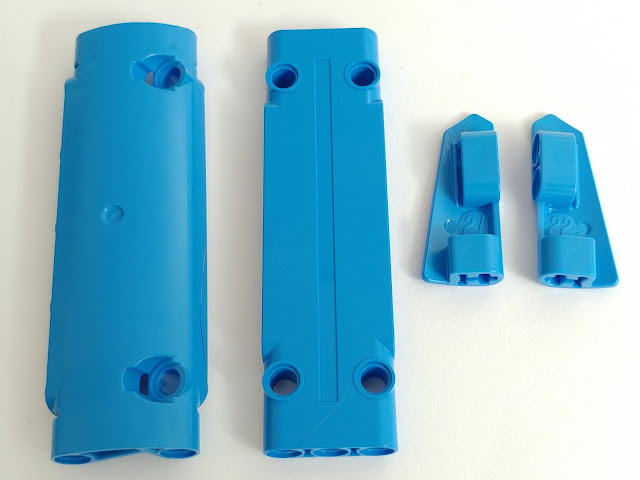 I'm glad that, after the "Fifty Shades of Blue" mess we witnessed in 2017, it seems TLG has definitely settled on the third blue for Technic: Dark Azure (the others being Bright Blue/ Blue and Earth Blue/ Dark Blue). This set includes quite a few parts in this colour, some of which were previously available in few sets: 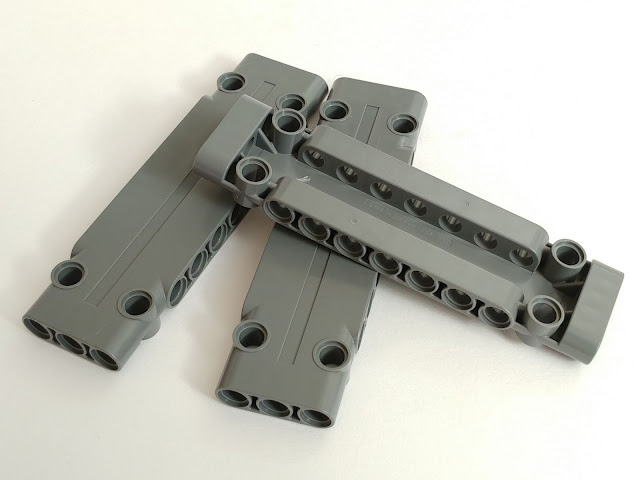 The Flat Panel 3X11M in Dark Stone Grey/ Dark Bluish Gray isn't particularly rare, but in this set you'll get a whopping 24 of them! 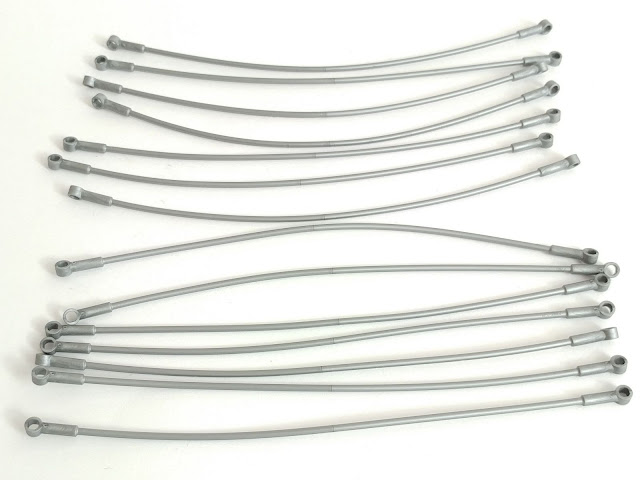 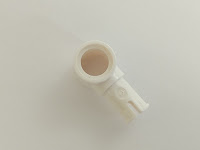 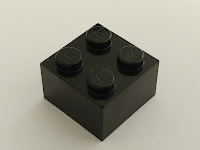 Modern Technic sets come with weirder and more specialised elements all the time, and this is a prime example: I have no idea what this strange thing is and what the thought process behind its creation was. The set comes with two of these. 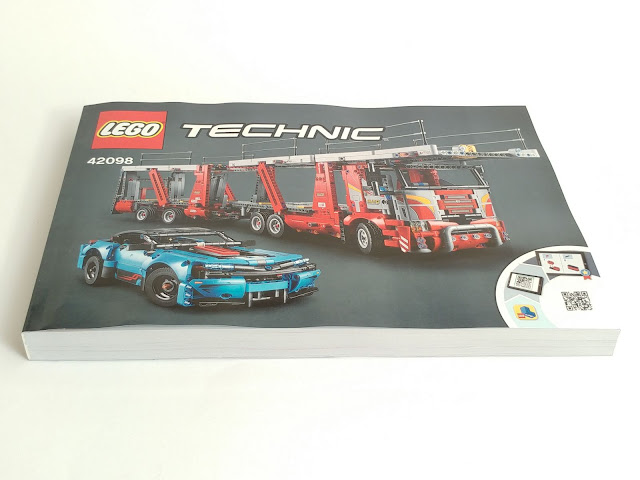 The instructions "booklet" is a massive beast, totalling 552 pages that contain the usual stuff like the instructions themselves, a summary of the finished model's functions, a cross-sell of the other LEGO Technic sets, and the parts inventory. Note that not even the phonebookesque size is enough to also include the instructions for the B-model; you'll have to go online for those. 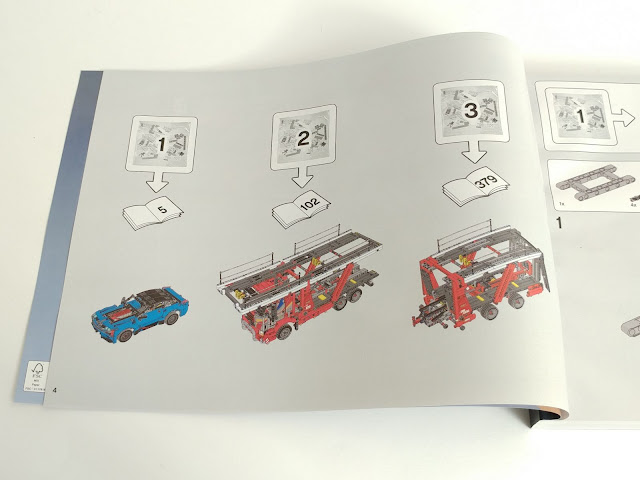 Since this specific set is composed of three more-or-less independent models (each with its own set of numbered bags), it could have come with three separate instructions booklets, one for each model, instead of the monolith. That would have made it easier for several people to build the set simultaneously, and thus turn the assembly process into a family activity. 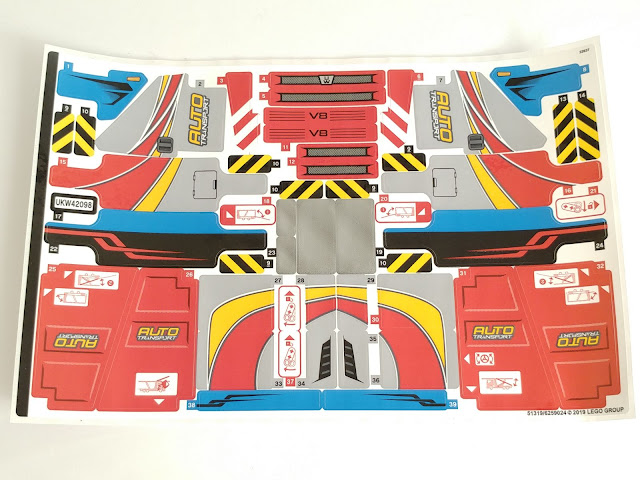 The stickers are abundant. While I agree that they add detail to the model, I personally don't like applying them, as they reduce the parts' MOCability. Still, they're better than printed parts, which don't give you the option of decorating or not. Love them or hate them, though, they're still too many of them here; you'll see below that there are some situations where a large sticker would have worked better than two small ones.

Construction begins with bags number 1, which build the Dark Azure car that is to be transported. 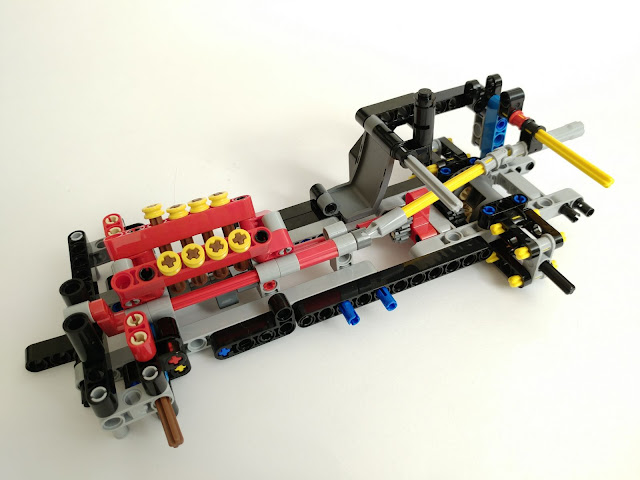 If you already built the 42093 Chevrolet Corvette ZR1, you'll feel right at home here: while the colours are obviously different, apart from small differences in function implementation the two models are quite similar. Both feature front wheel steered from a knob in the rear and a small V8 engine driving the rear wheels via a differential. 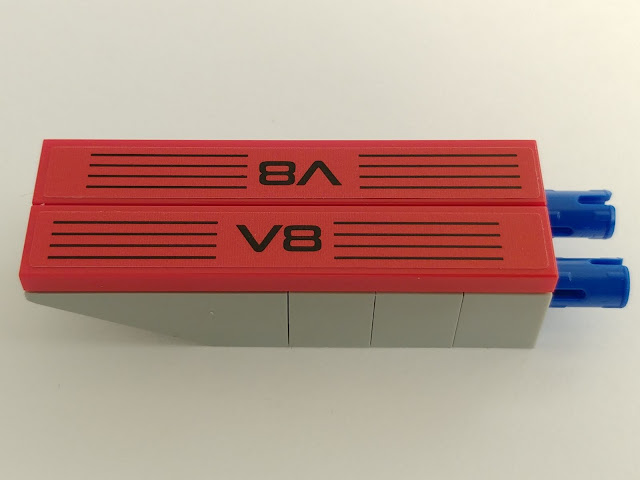 Here you can see a design defect in the stickers that go on the engine head: they're the same and off-centred, but placed with opposite orientations. This makes them misaligned, and could easily be avoided with distinct printing for each sticker. 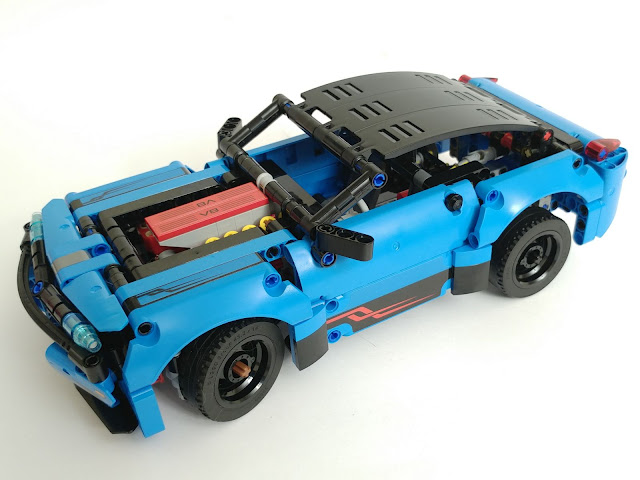 After a few more steps, the car is done. I wasn't a big fan when I first saw it in product pictures, but, having it in the hand, its design grew on me. It has a pleasant mix of boxy "muscle car" with a pinch of sleek modern curves. I especially like the brick-built sides that help the wide mudguards flow into the narrow midsection. 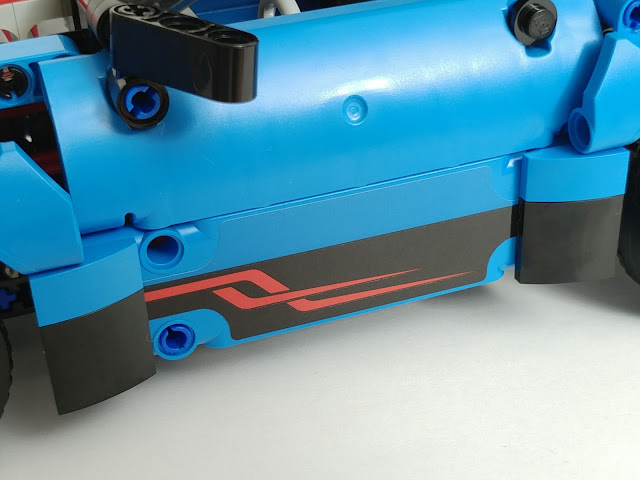 Next, the truck itself is built. I find it interesting that the raising and lowering of the upper deck is performed indirectly, by moving forward and backward the lower point of attachment of the rear arms that support the deck. This is achieved by the rack and housing assembly that debuted in the 42043 Mercedes-Benz Arocs 3245, well anchored in the heart of the model. 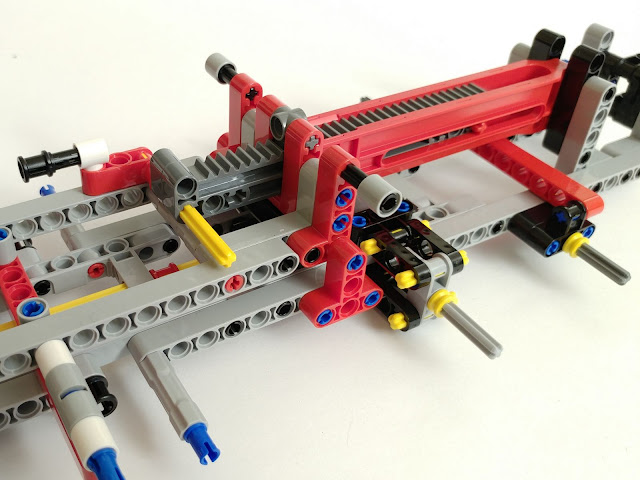 It is at this point that I found a building technique that stretches a bit the strict LEGO official set building rules. After building the axle-based assembly that has the Black connector (Design ID 87408) in one end and the Bright Yellow 3M axle (4519) in the other, we're supposed to insert the Bright Yellow axle in the main structure (on the right in the photo below). 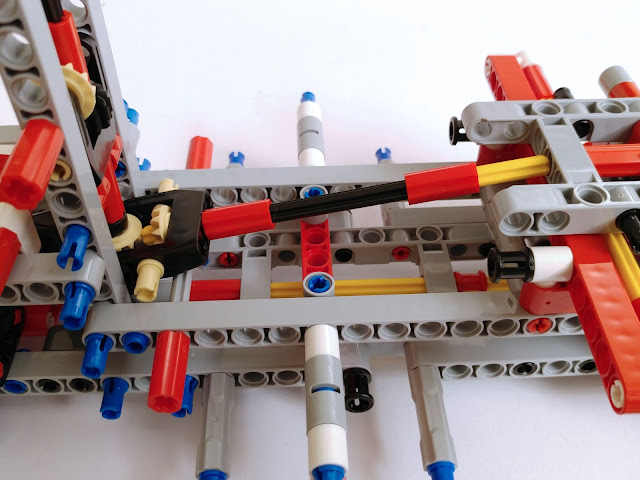 However, the space for that is very tight and requires the assembly to be inserted at an angle. This still works within the tolerances in the parts' dimensions and I'm sure many people (including myself) did worse stuff in their MOCs, but nonetheless this is something weird to see in an official set.

Now comes what I talked about earlier: the excessive number of stickers. 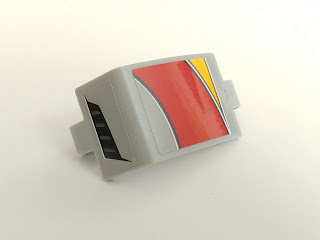 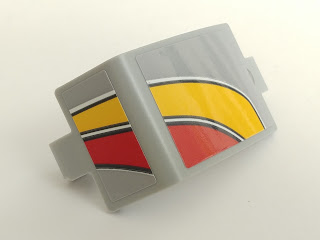 Each of these angular panels (24116) takes two stickers, instead of a larger one that could cover the same area as the small ones plus the space between them. This breaks even more the design already broken by the (admittedly very welcome) absence of STAMP (Sticker Across Multiple Parts). Maybe there's a usability problem with applying stickers over a curved surface? That would be strange, as in the past there have been LEGO sets with stickers on curved surfaces. Anyway, this has a large impact in the model's looks, as these stickered parts are used smack on its front.

After a few more pages, steps and parts, the truck's chassis is done. Before adding all the panelling and wheels, we can see all the mechanisms: the gear rack that lowers the upper deck, the steering assembly, the cabin tilt linkage, and the small V6 engine. The designer of the 9393 Tractor's B-model hit the jackpot with the idea of making a smaller cylinder engine using generic parts, and TLG really went with it! First with the 42078 Mack Anthem, then with the 42093 Chevrolet Corvette ZR1, and now twice with the 42098. 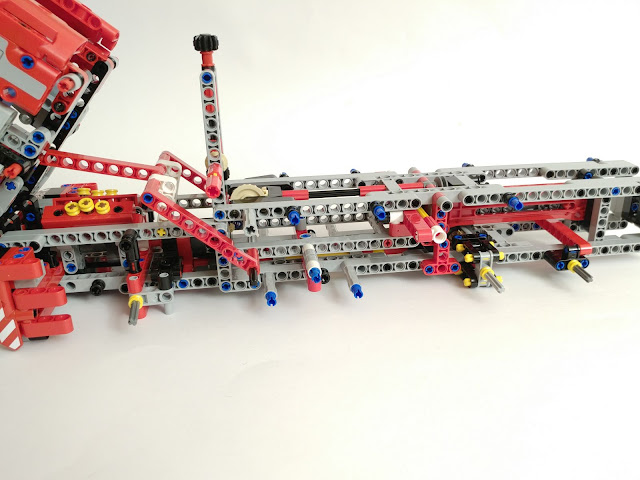 Mock... uh, I mean mark, my words: just like the construction of V-engines using the "traditional" cylinders (Design ID 2850 et al.) got simplified by the introduction of the specialised V-Engine Holder (32333), it's only a matter of time before we see elements popping up that focus on facilitating the construction of these new, smaller engines.

To top off the truck, the railings that ensure the safety of those folks frolicking on the upper deck are installed, using the aforementioned numerous flex tubes and Sticks 6M W/Flange (63965). There are no markings on where exactly where along each stick the tube should attach, so I used a spare pin to "measure" the spacing and make it constant throughout all the railings. 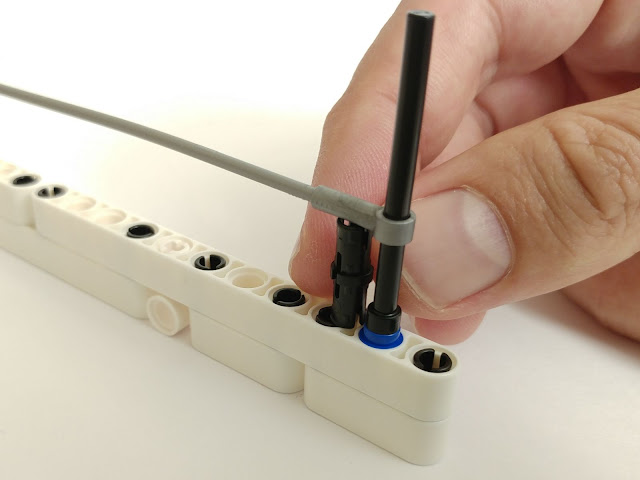 The truck is now ready, and looking at it I can't shake the feeling that it's just one rear ramp short of a very capable set by itself. 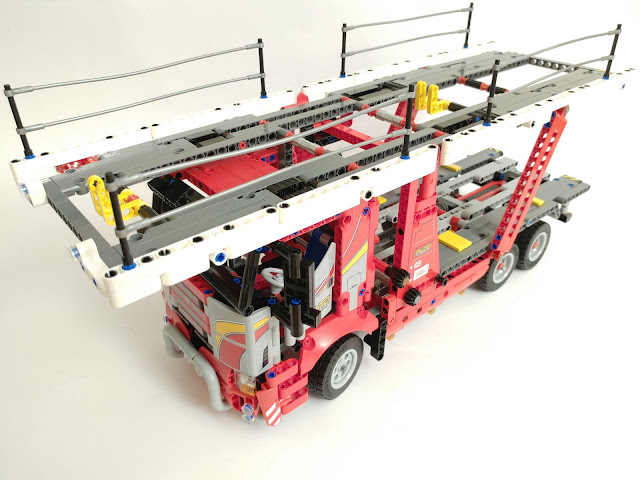 Finally there's the construction of the trailer. The gear rack-based mechanism that raises the upper deck is almost the same as on the truck, with a difference whose reasoning I don't understand. I'll address this below, when the set is fully built. 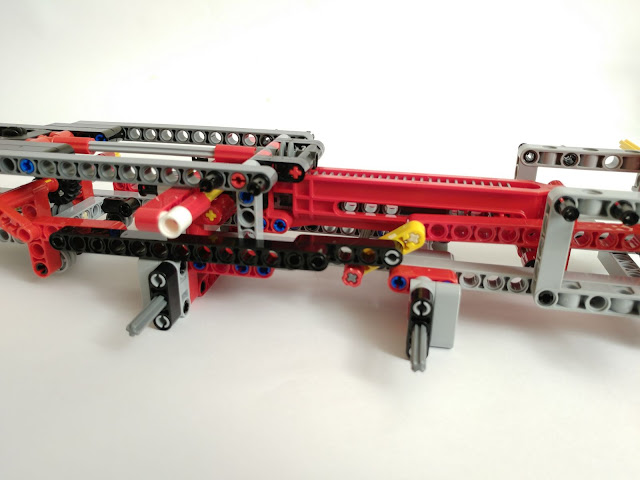 The mechanism for lowering the rear ramp is interesting: a knob near the front drives a worm gear (27938), which then moves a set of long linkages (in Black, Bright Yellow and Bright Red in the photo) that stretch along the full length of the trailer until the rear. This complexity wasn't strictly necessary but helps keep the controls near each other, which is convenient. 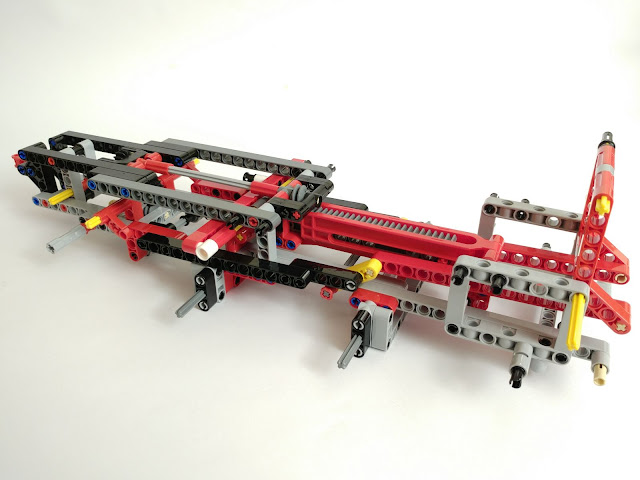 After assembling the intermediate ramp that allows cars to pass between the truck and the trailer, the construction of the support arms, upper deck, and railings is very similar to that in the truck. Then it's just a matter of connecting the trailer to the truck and appreciating the monster. 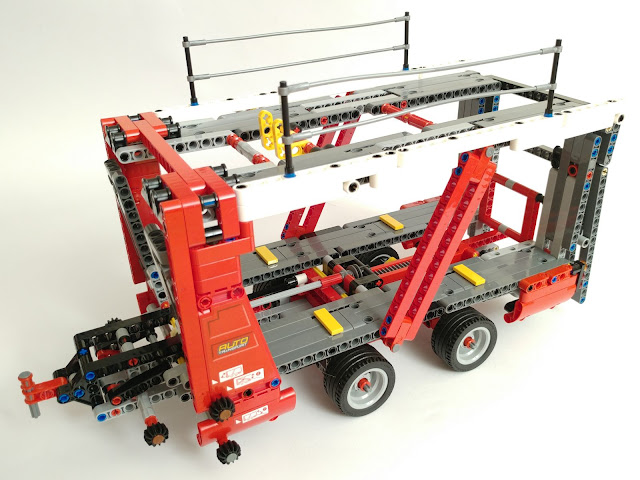 READ MORE: Continue to part 2 of this review: the finished model and our verdict

Products mentioned in this post were kindly supplied by the LEGO Group. All content represents the opinions of New Elementary authors and not the LEGO Group. All text and images are © New Elementary unless otherwise attributed.
Posted by: Admin Posted on 7/17/2019 12:31:00 pm
Email ThisBlogThis!Share to TwitterShare to FacebookShare to Pinterest
Labels: Set review, Technic