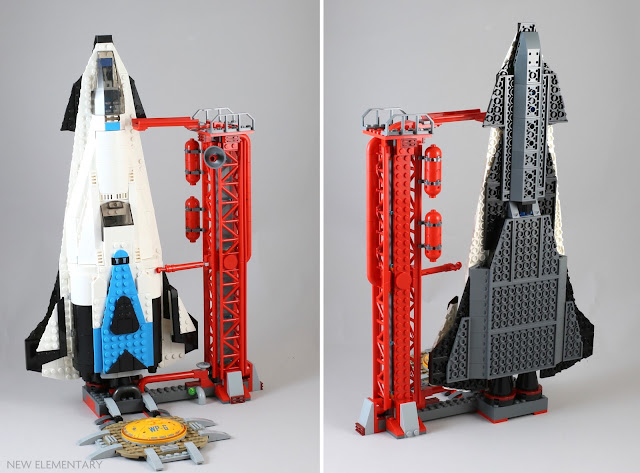 We can't help ourselves here, a review just has to start with the new elements in the set. We will look at the minifigures separately  which leaves five brand new elements that are new moulds in Watchpoint: Gibraltar.

Dark Stone Grey [TLG]/ Dark Bluish Gray [BL] Weapon, No. 20 (Element ID 6255067|Design ID 44709) is included in this set. There are also two of the same element in another Overwatch set, 75972 Dorado Showdown. As we mentioned in our previous Overwatch review, 75973 D.Va & Reinhardt, there are four colours of this element included within the Overwatch theme overall. We are going to be taking a closer look at this connection-filled element in a future post. 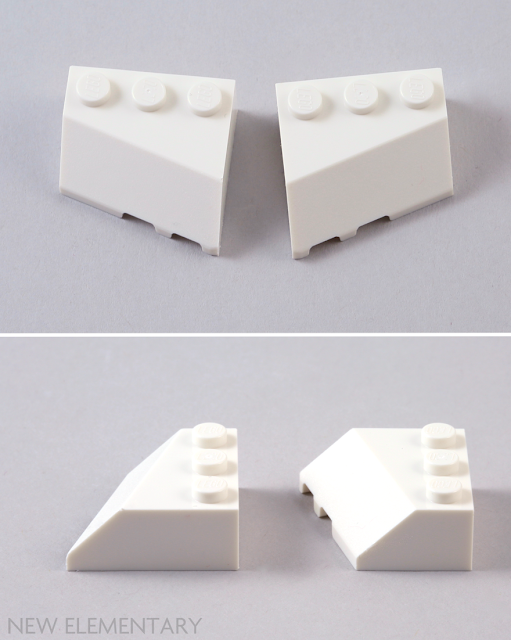 The element has a 45° slope at each end but being two studs wide at the top and three studs at the base gives it an 18° angle across the face of the slope. The top surface is a familiar shape as it matches a Left Plate 2x3 w/Angle (Design ID 43723). 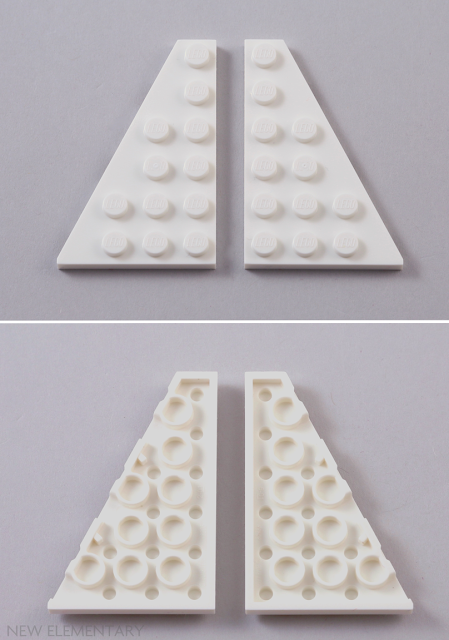 These elements also appear in two other colours from sets in the LEGO Star Wars theme: Black, and Bright Red [TLG]/ Red [BL] in 75240 Major Vonreg's TIE Fighter and also in Black in the upcoming promotional set 75227 Darth Vader Bust. The good thing about the Black version appearing in a retail set means that you can purchase the parts required to build your own version of the potentially hard-to-get promo set. 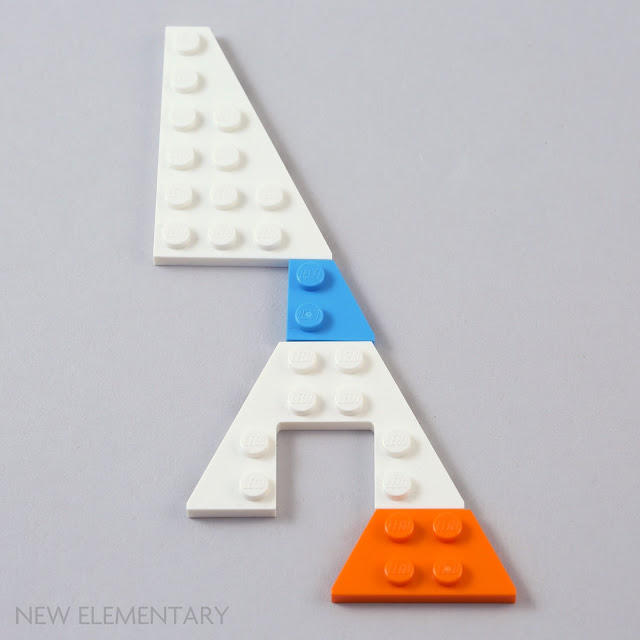 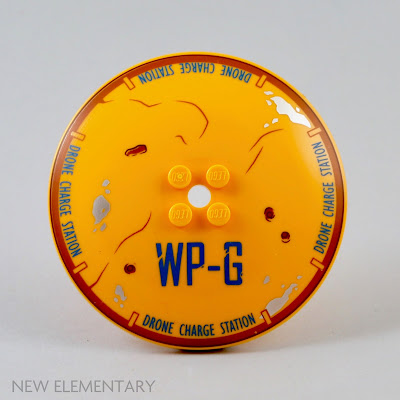 Although this is a printed element, the actual element (Design ID 3961) has never appeared unprinted in Flame Yellowish Orange so it is still a new colour. 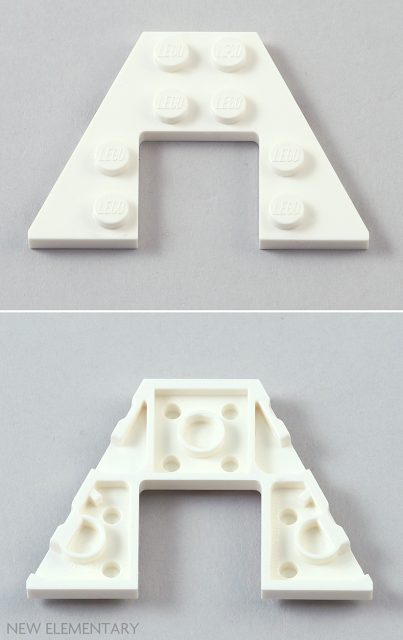 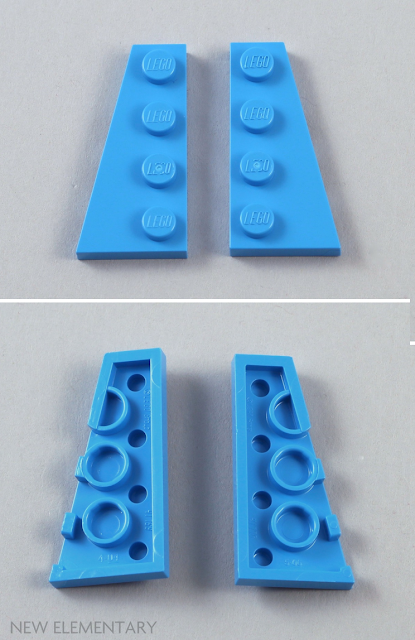 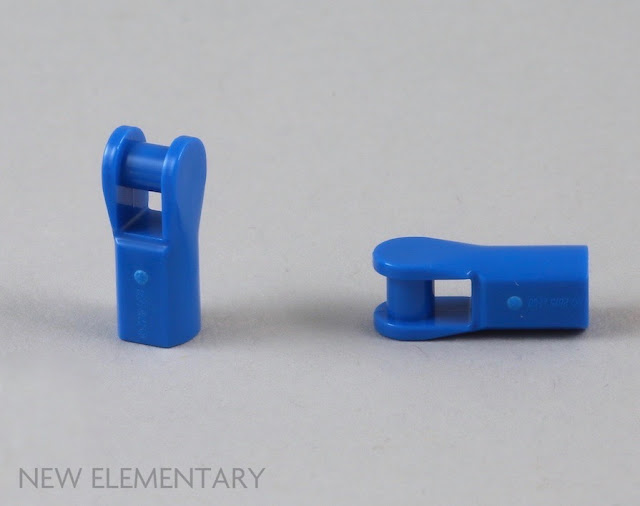 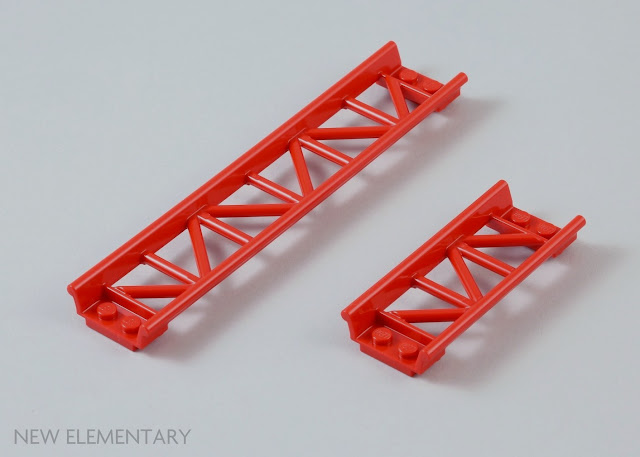 The new wedges and slopes are all used to form the shapely body of the shuttle with the Black outline nicely visible when looking at the hull. 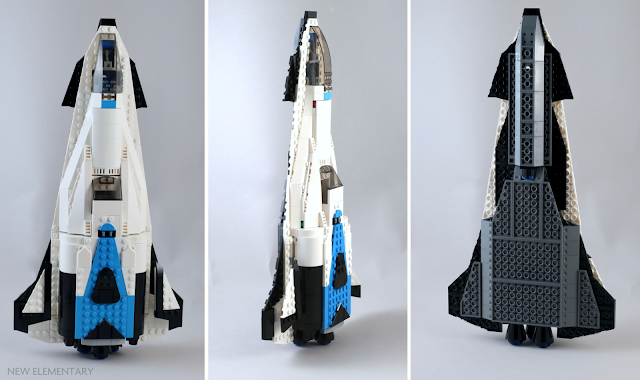 As you can see from the first image, the shuttle actually splits into two spacecraft thanks to a Technic pin and hole connection. This split gives an aerodynamic front craft and a stumpy rear craft. The front craft seems to have a extra layer of studs before the Black tile nose, for some reason I would have liked this to be more shapely and smooth. 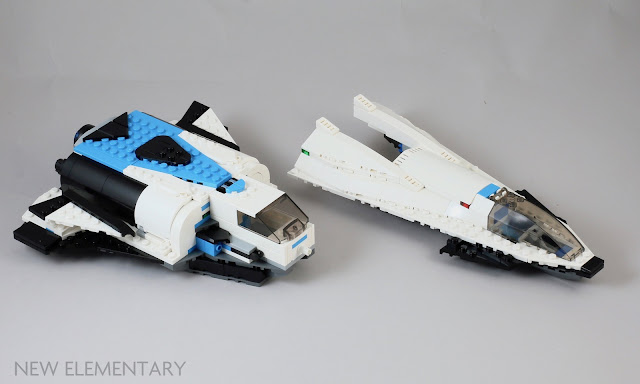 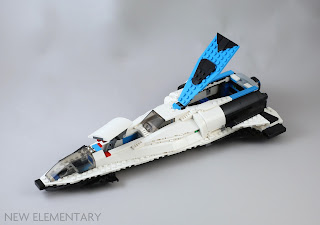 The front cockpit windshield opens on a hinge but the rear windshield needs to be removed to give access to the cockpit. On the plus side, the large Dark Azure plated area opens to reveal a rather empty interior and a portion of the hull raises to become a manoeuvrable weapons system.

Finally, the Bright Red rollercoaster rails are put to great use for the launch tower in the set and would be potentially useful to re-size and re-purpose as a Saturn V launch tower. 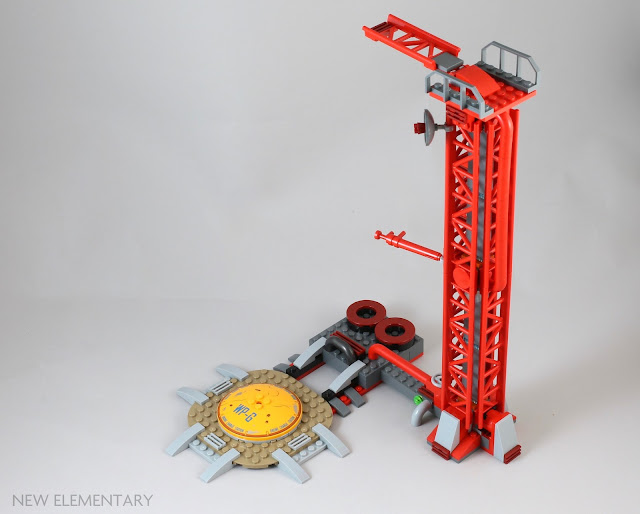 The printed Flame Yellowish Orange dish can be seen here in position where the Satellite drone payload vehicle* can land. 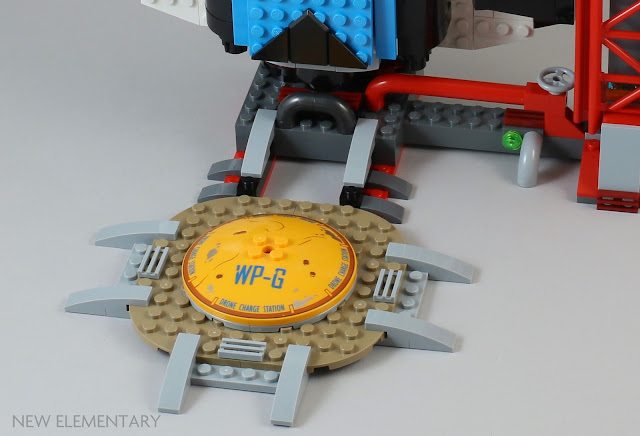 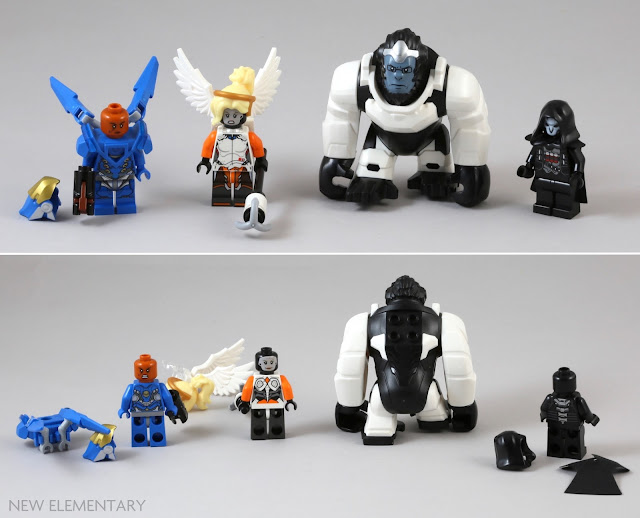 The set includes three minifigures, namely Mercy, Pharah, Reaper plus a bigfig Winston who is an armoured, bespectacled gorilla. We don't focus too much on new minifigures at New Elementary as almost every minifigure that LEGO now produce contain new, printed elements. 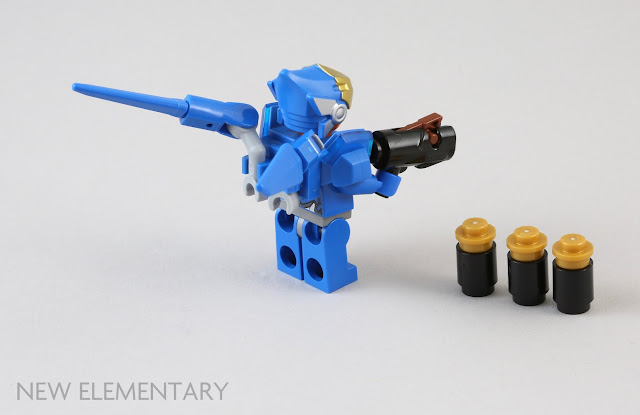 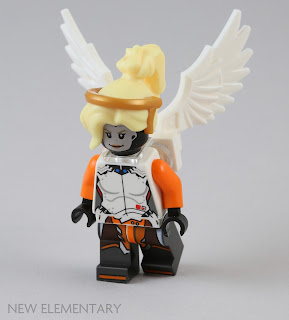 Mercy has a new hairpiece, Cool Yellow [TLG]/ Bright Light Yellow [BL] Mini Wig, No. 243 (6256086), that only partially hides her sallow, pale face as she flies towards you like a zombie-angel...

I am not really sure what is going on with the "lighter colour onto darker elements" situation in LEGO factories at the moment but Mercy's face is another example of poor printing I'm afraid. Her Light Nougat [TLG]/ Light Flesh [BL] print quality is really poor which is something LEGO really need to sort out.

Below you can see a LEGO Light Nougat head with classic smile next to Mercy's poor Light Nougat printing. For further comparison, Citizen Brick pad-print their own Light Nougat faces onto darker colours with much better outcomes than LEGO themselves. 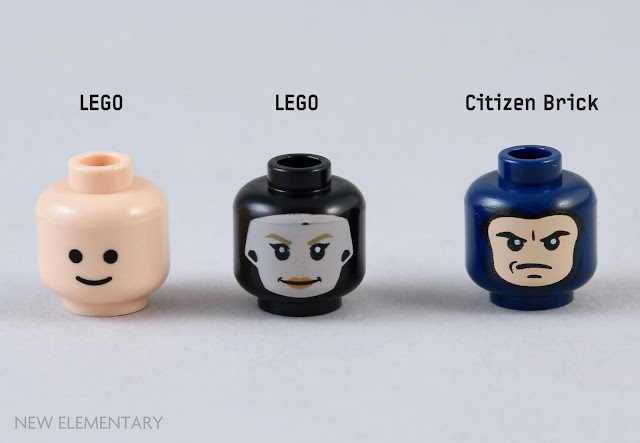 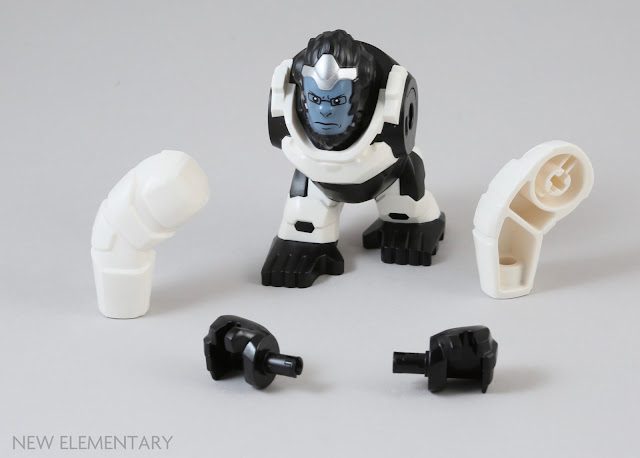 His feet are odd looking but actually they are 'in System' and have anti-studs on the bottom. 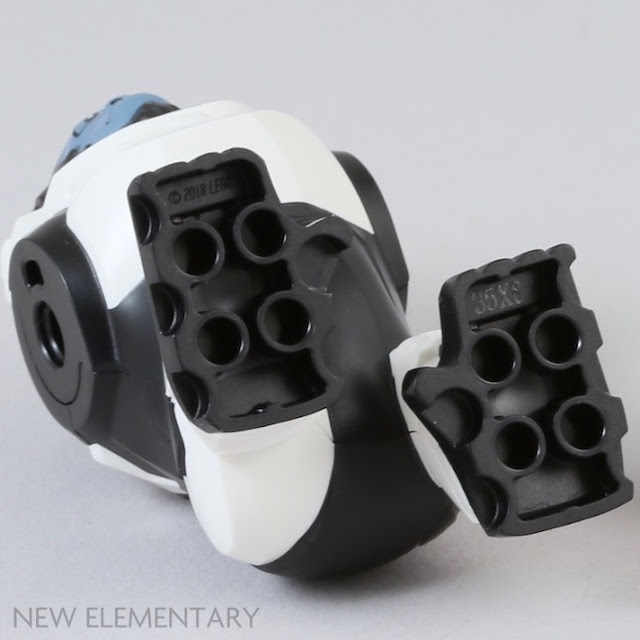 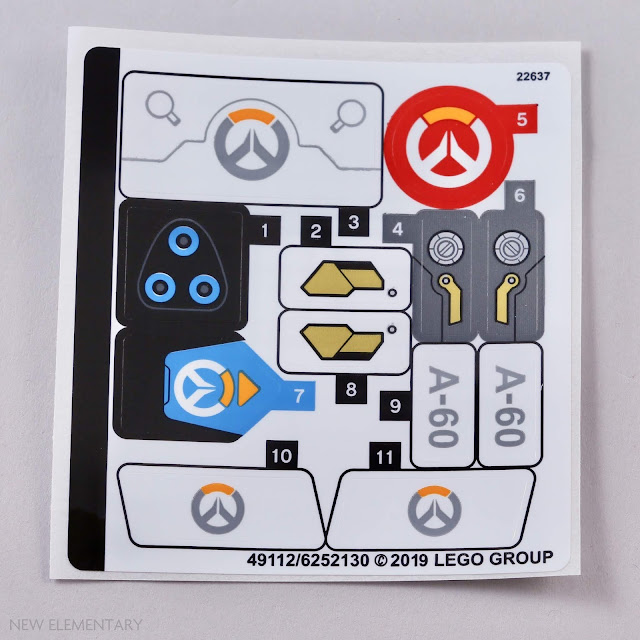 I should mention that there is a sticker sheet with this set but I did not apply them as I like to see the beautiful elements unblemished by sticky paper.

A rather pricey set in terms of its number of exciting new elements balanced with overall cost at first look. There are plenty of other interesting new-for-2019 elements also contained within the set, such as Minecraft 'feet' brackets, plus there are a host of angled plates, and you can certainly expand your Bright Red rollercoaster rail collection with this set.

Three out of the four minifigures are exclusive and will be a big draw for collectors, but the printing on Mercy's face will come back to haunt LEGO I think. For big Overwatch fans this set will be a balance between disappointment with the minifigure and the play and/or display potential of this large, playable set. Most of the key new elements can be purchased on the secondary market now although the Overwatch weapons can be difficult to source depending on your location (plus they are not available on Bricks and Pieces).

As a build, the shuttle is fun with flashbacks to the golden age of LEGO Space, although the front nose section is odd and the stumpy rear shuttle laughs in the face of aerodynamic flying.

Products mentioned in this post were kindly supplied by the LEGO Group. All content represents the opinions of New Elementary authors and not the LEGO Group. All text and images are © New Elementary unless otherwise attributed.
Posted by: Elspeth De Montes Posted on 4/26/2019 04:00:00 am
Email ThisBlogThis!Share to TwitterShare to FacebookShare to Pinterest
Labels: Overwatch, Set review, Space