This happened to me this week: while my sorting continues, I was browsing through my holding bin of bricks with bows and arches.  Look, over there, a distraction. And before I knew it, I found myself considering the 1x4x2 arch and what I can place snugly under this arch.  Fortunately, during The Sort, most of the the relevant parts ended up in the 'bricks with a curved surface' bin.

The curve of this arch perfectly describes a semicircle, with a radius of one stud (that is, a length of a 1x1 square plate).  This is the same circle described by a 2x2 round plate, brick, tile or droid body. Also the base profile of a 2x2 dome brick, officially known as "Final Brick 2x2" (Design ID 30367). But more on that element later.

Lining up the likely suspects

Let's see if the curve that each of these elements features is the same.  I lined these elements up on a plate, and adjusted them so that the top of each element coincides.

Lined up, side by side and adjusted for height, it appears obvious that most of these elements all follow the same curve: 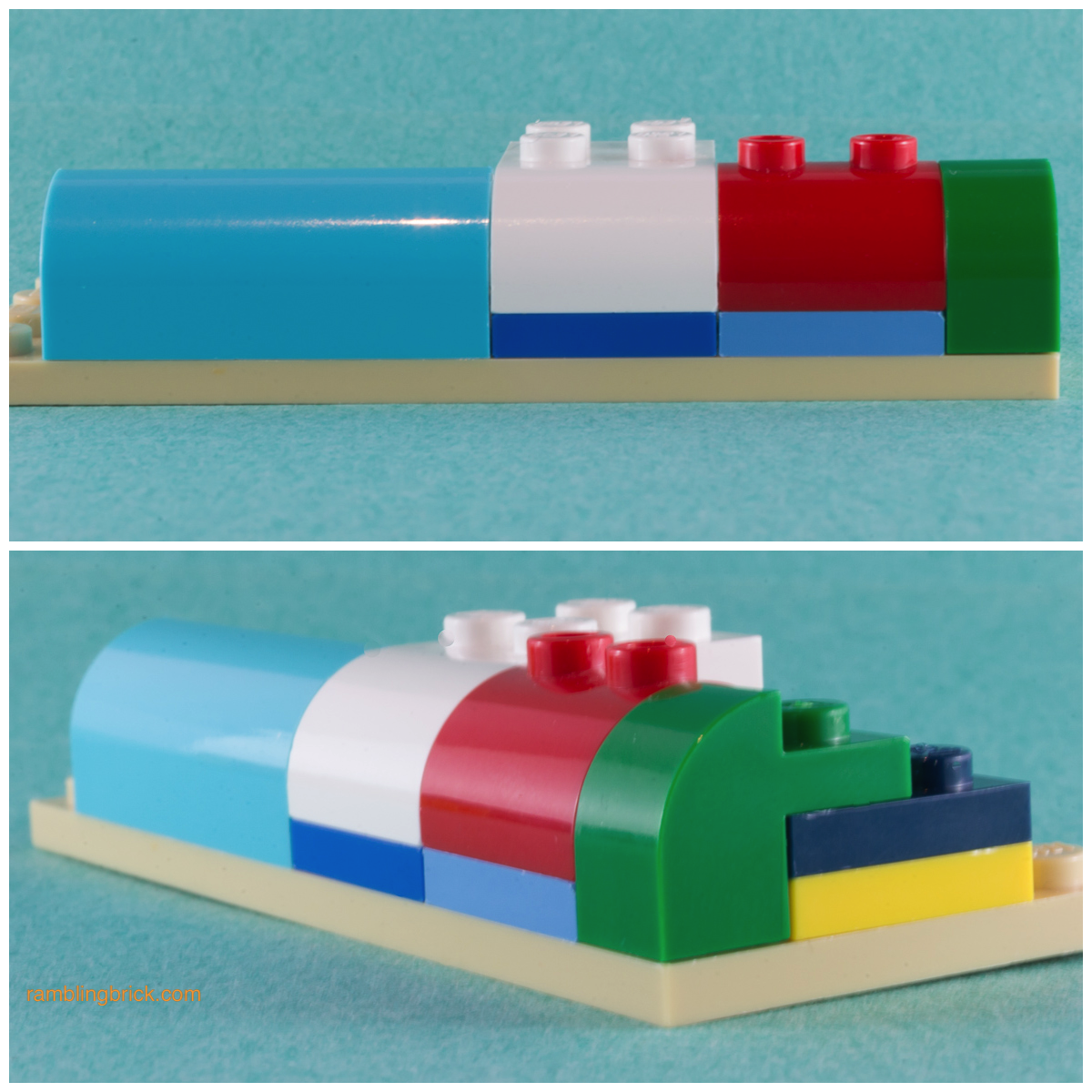 These elements can line up under either the arch, or underneath "brick 1x3x3 with ins and outs.Bow" (Design ID 92903) - now in the running for most confusingly named element ever. The technique for placing the 1x1x1 1/3 arch under this brick was demonstrated in the Mixels set 41574 Compax. 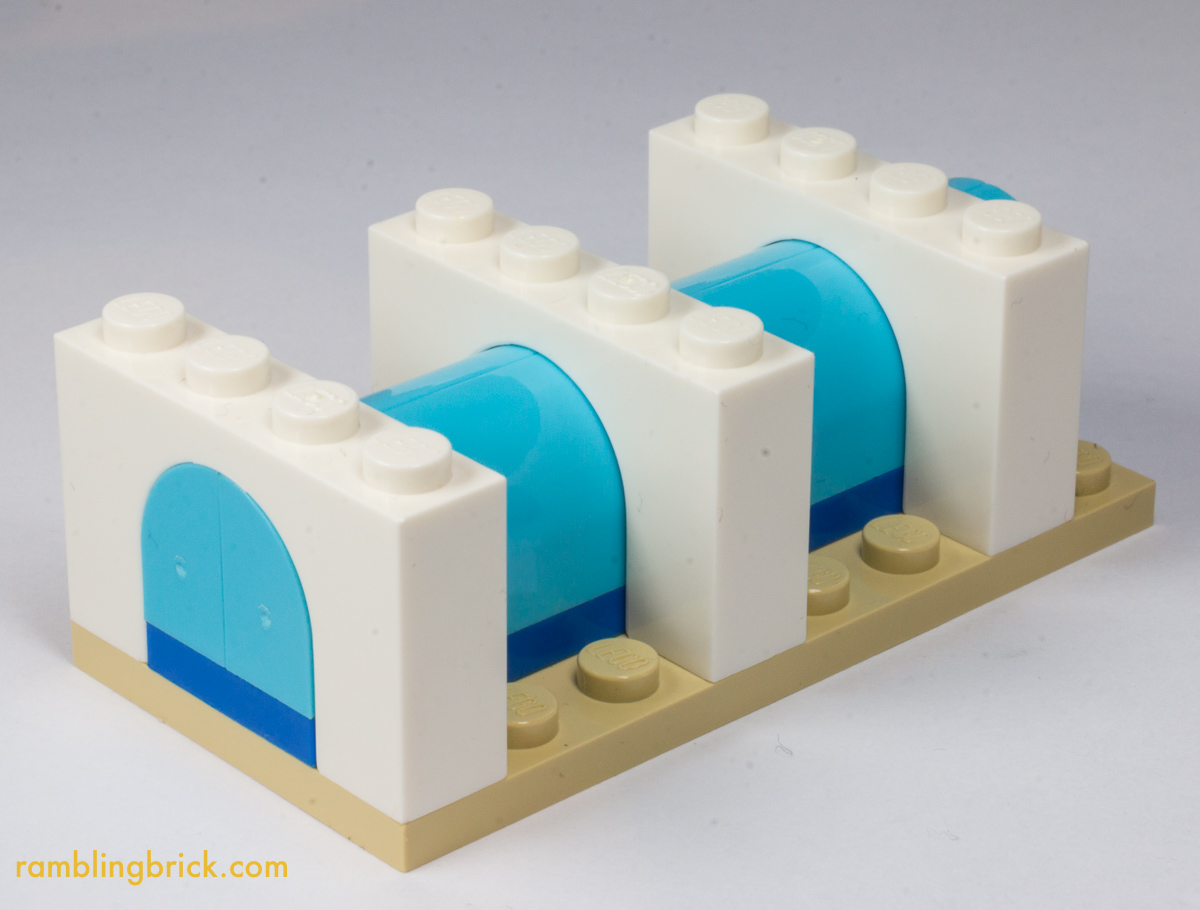 As you can see, the brick with bow and knobs fits in nicely, with the studs fitting into the underside of the arch.  The 1x4x 1/3 brick also fits in under these arches nicely, especially when effaced back to back with identical elements.  The bricks with half arch do not follow the full curve, and cannot fit under the 1x2x4 arch. But that's ok: they aren't really the same shape. They do, as mentioned earlier, fit in under the 1x2x3 curved brick.

You can take the 2x2 round plates, round bricks and round tiles, and they will also fit the curve under the arches nice and snugly. And importantly, the arch can wrap over the top and bind firmly onto the baseplate.

However, there is one brick that this exercise doesn't work with nicely; the aforementioned 2x2 dome with stud on the top. At its base, this is a round brick, fitting onto a column cleanly. The base is described as a circle with a radius of one stud: it matches up perfectly with the 2x2 circular bricks and plates.

Now, there are a couple of variations occurring in elements sharing this single Design ID. BrickLink lists several variations on the element:

Following up the sets that these specific elements are included in reveals several things (by looking up the Element IDs in the instruction manuals): internally, these elements are regarded as equivalent by the LEGO Group; and some of us have a little too much time on our hands to actually look into it.

As you can see, both of the variations illustrated above (553a and 553c) are the same height as the 2x2 brick with bows and knobs, and the curve in the vertical plane appears very similar to its side profile.

BUT does 'the Final Brick' fit under the arch?

The stud fits, somewhat firmly under the arch. However, when adjusted for height, and using 2 offset plates to centre the arch over the dome, the legs of the arch piece do not sit as flush with the underlying plate as they did straddling the other curves looked at today. This would suggest that the Final Brick does not form part of as sphere, but is rather slightly compressed.

What would account for this? The Final Brick is three plates high, the same as any other brick. The dome does not describe a perfect hemisphere: If the circle is one stud in diameter, this is equivalent to 2½ plates thick.  I would have expected half a plate would typically be more than enough height for the studs to bind into an uncurved aspect at the bottom of the dome.  However, placing it next to a brick that shows the full curve, it seems that the Final Brick has higher shoulders, running vertically from the bottom than this other curved element. I would suggest then, that the shape of the dome is does not follow a circular dome, but is rather a slightly squashed, with the shoulder a tiny bit higher than would allow it to fit under the arch neatly.

Looking closely, you can see that the white 'final brick' has taller vertical shoulders for a longer distance than the red brick with bow and knobs.  This prevents it from sitting perfectly under the arch: therefore, in the vertical plane, it does not form part of a circle, with a radius of one stud.

Just why, however, I have no idea!

The 'one stud radius curves' provide a useful set of tools to round off sharp edges in LEGO creations, and can fit neatly inside other curved elements to allow interesting colour banding or building techniques.  This utility does not however extend to the Final Brick.

This part is also used as the basic shape for an astromech droid head in the LEGO Star Wars sets. This domed element has a slightly raised shoulder, which means that the curve of the dome does not form a circular arc, such that be placed closely under a 1x4x2 arch.

I do not expect this observation to change your life.  It probably won't change mine. However, I am curious to know if this element has this shape because it was a better approximation of an R2 unit's head dome than if it were to be a perfect dome, or if there were more important structural elements being taken into consideration when it was initially designed.
I had been pondering a moonbase in the future involving a series of domes being braced by arches over the top.  As such, I may need to rethink the scale of these for now:

What do you think? Are these curves useful for you in your modelling? Does this level of obsession worry you? Leave your comments below or, better still, on the original post on the blog where you will find that I don't always dig this deeply into minute detail.

Until next time,
Play Well.


READ MORE: Why did the LEGO Group slightly tweak all the arched bricks?