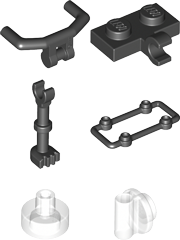 Jonas Kramm is back with his third instalment for "The New Black", our celebration of a selection of new and recoloured LEGO® parts here on New Elementary. The ones Jonas picked for this post can be seen to the right, and as you can see he branched out to include the two Transparent [TLG]/Trans-Clear [BL] elements that I sneakily added into the mix, just because they're so lovely.

After talking about building outdoor objects in my last two posts, it's time to go indoors.

Most of the new elements used here feature the 3.18 bar attachment, which allows for a lot of possible connections when combined with clips. Some of these possibilities were used in my first idea, a chair design that was based on using the recoloured handlebar (Element ID 6078610 | Design ID 98397) as legs. This part is the centrepiece of the chair as it holds not only the arm rests but also the seat, which are made of a square street sign (Design ID 30258). 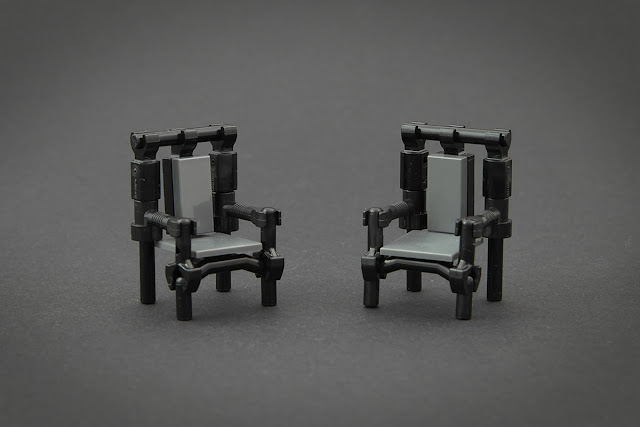 While the connection between the 'mechanical claw' (Design ID 48729) and the handlebars wouldn't be classified as “legal” by the LEGO Group, they hold quite well and allow the chair to be a sturdy piece of furniture. In addition, the chair fits a minifigure. 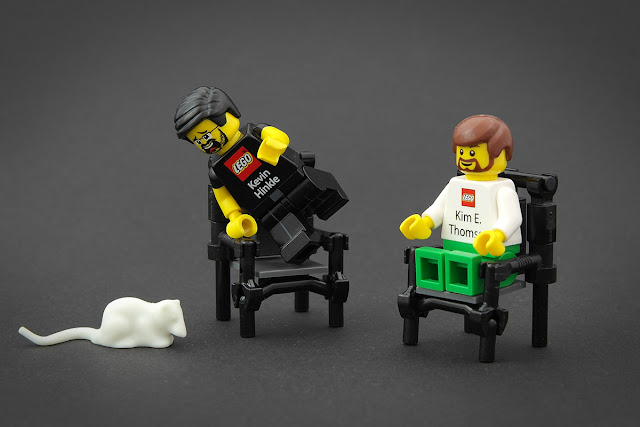 The black handlebar was not only perfect for chair legs but for tables too: 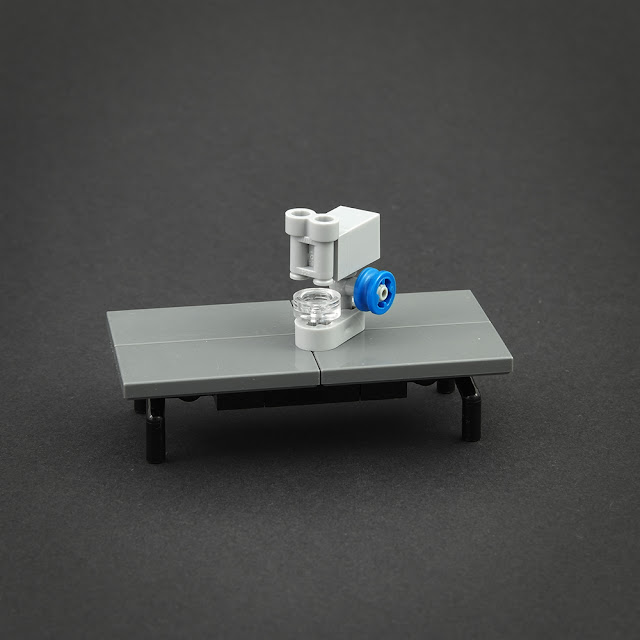 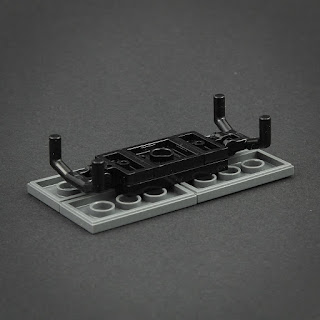 What a nice coincidence that the 1x2 plate with clip (Element ID 6132731 | Design ID 11476) was recently recoloured in Black to hold the table legs in place. On the microscope I used one of the Transparent elements included in this challenge, the 1x1 round tile with pin (Element ID 6112751 | Design ID 20482), for the first time. By the way, this part will be available in Black within the Modular coming in January, 10255 Assembly Square.

While building the microscope I came up with an alternate design, so I decided to build another table as well. The first one had somewhat short legs, so I used the new skeleton legs (Element ID 6124849 | Design ID 23769) here: 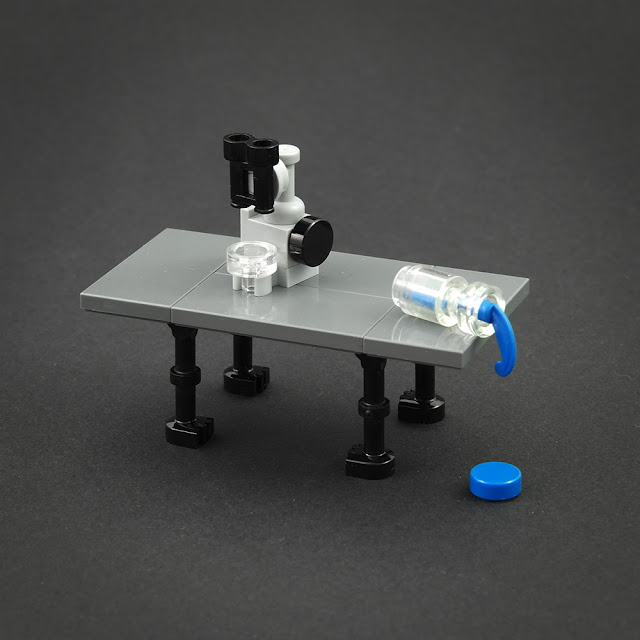 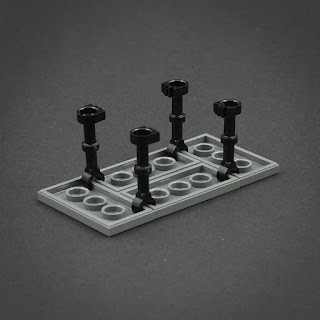 Again the microscope uses one of the Transparent 1x1 tiles with pin, but furthermore the same piece allows not just for a nice bottleneck, but also gives the required 1.5mm attachment for the plume, which represents some dripping liquid here.

I continued with the lab idea and added a tiled table as I remember them from my chemistry classes in school. The table itself does not use any of the new parts but the tools on top use, once again, the skeleton leg and the 1x1 tile with pin (Element ID 6112751| Design ID 20482), which also gets used in the round flask on the left: 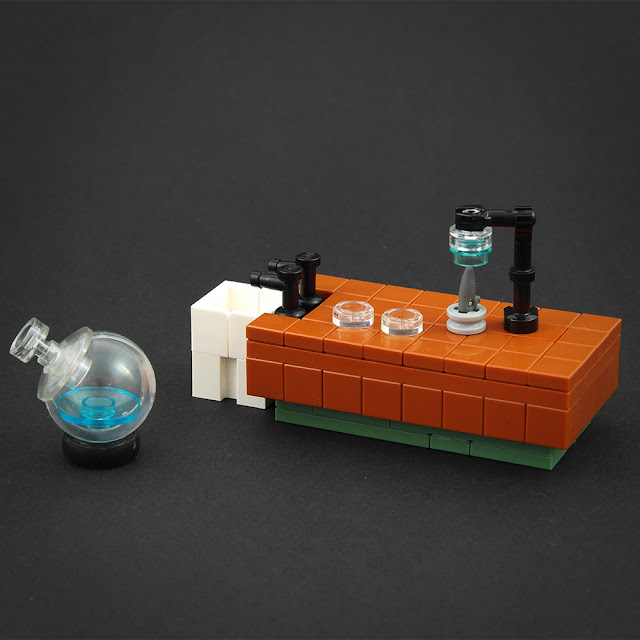 As I already had build two different glass bottles I searched for more elements to combine with the 1x1 tile with pin to make bottles in other sizes. A transparent minifigure head and a 2x2 dome fit perfectly: 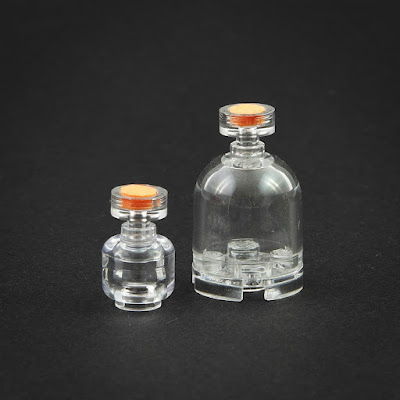 You may ask yourself what the orange thingies are that represent the corks for the bottles, so I will use this chance to make a small excursion to introduce some “bricks” that will be new to most of you but are actually pretty old.

16 years ago in 2000, when the LEGO Group was losing track of what made them once one of the best toy brands in the world, they brought out some Scala sets that used foam instead of bricks for the “building”. This period is not really well known by AFOLs, as the sets didn't include a lot of useful pieces for regular building. But at least the foam pieces are interesting; not the big bushes or flowers, but the small dots that you have to push out of the sealed foam sheets to connect them to the building and that were usually thrown away as rubbish. 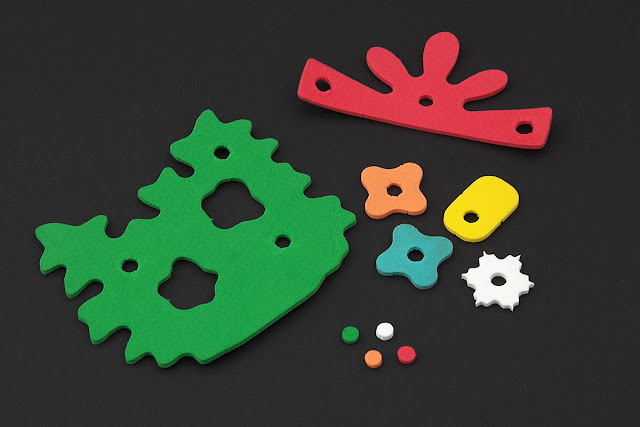 But given these are the size of a stud, these leftovers are great for details. I already used them as a fried egg and now they provided perfect corks. By the way: using these parts is totally legal as LEGO once used them as dog food, in set 3150 Puppy Playground.

My last idea for today does perfectly well without requiring any suspicious foam elements. It's an office setting with two shelves, a desk with a printer and a few other details like a trash can and a flower pot. 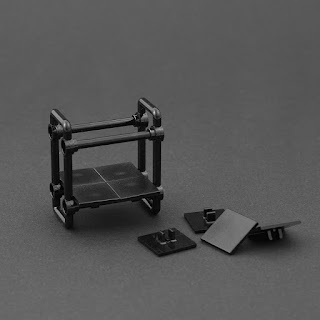 The seed part for this build was the Black lattice 3x6 (Element ID 6138603 | Design ID 23444). In combination with four 4L bars and eight square road signs, you get a simple yet elegant shelf that can be filled with office stuff.

Less noticeable in the above photo is the use of an other new mould; I used the new 'pacifier' in Transparent (Element ID 6153264 | Design ID 25893) to attach the minifigure hands as legs for the small table. You can see this in the detail picture below, where you can also see that the sheet for the printer is made of an old minifigure vest (Design ID 3840) in White. 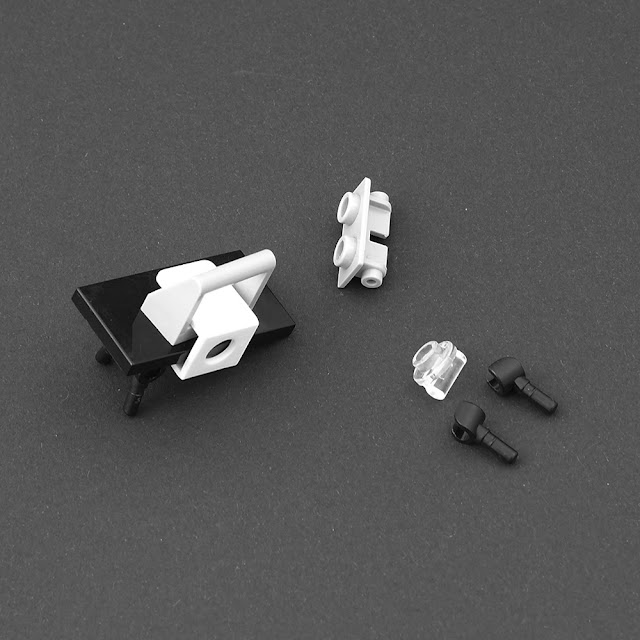 This was the only use of the pacifier I have found while building for New Elementary. It is without any doubt an interesting and versatile part but I could not find any good use where it profits from being transparent. So I hope for new solid re-colours for this element so it becomes more useful, and not merely in the substruction where it can not be seen.