The best thing about doing this blog is meeting people who like it! A noticeable amount of these people mention that their favourite post is "that one about the arches", which I wrote back in March 2014 detailing the ways in which the part designers were raising up the interior curves in arched bricks. If you haven't read it you may like to do so first, as I have a little more to say on the subject today, but first we need to take a look at a related part which Gary mentioned last time, in his review of 41101 Heartlake Grand Hotel, the bow window.

The official name given by the LEGO Group (TLG) is Bow Window 1X4X1 2/3 whilst BrickLink (BL) have opted for Window 1 x 4 x 1 2/3 with Spoked Rounded Top. The Design ID is 20309 and so far it only comes in Brick Yellow [TLG]/Tan [BL], with an Element ID of 6112306, and indeed Heartlake Grand Hotel is the only set it comes in at time of writing. You get four of them in the set. As Gary mentioned, there is no accompanying piece of glass to fit inside it. As you can see in the picture above, the piece is not perfectly symmetrical - the spokes sit towards one edge, providing you with two placement options.

Once again I called upon the skills of a trusty gang of AFOLs to examine the potential of this new piece, and here's what they came up with!

Rod Gillies saw its potential for use in microscale... 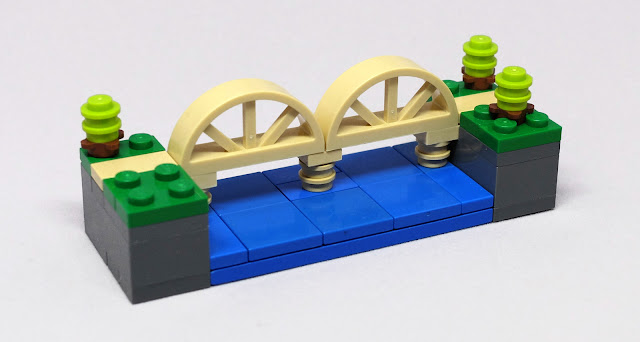 While Simon Pickard also made a bridge, but in minifig scale... 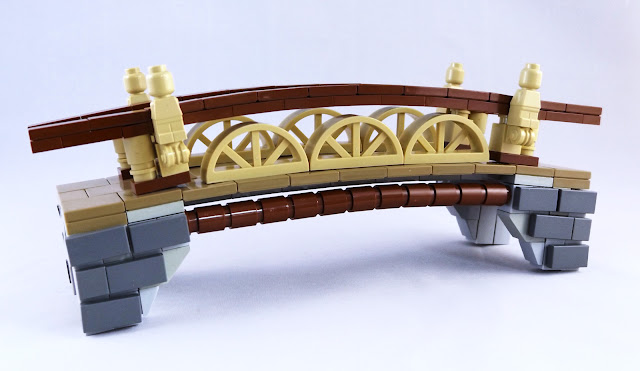 Drew Maughan did some lateral thinking and earns extra points for curlicue feet... 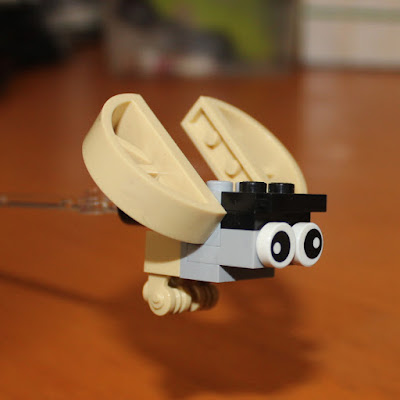 ...while Elspeth DeMontes made functional use of the bow window... 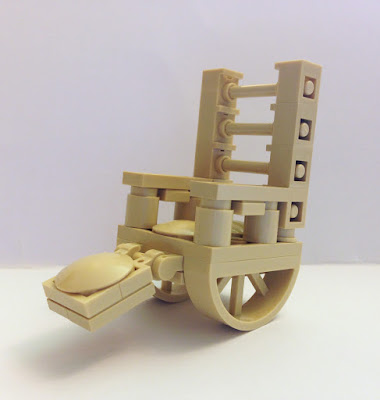 ... and Iain Scott used SNOT to create something both sci-fi and fantastical, which he calls The Spinning Citadel. 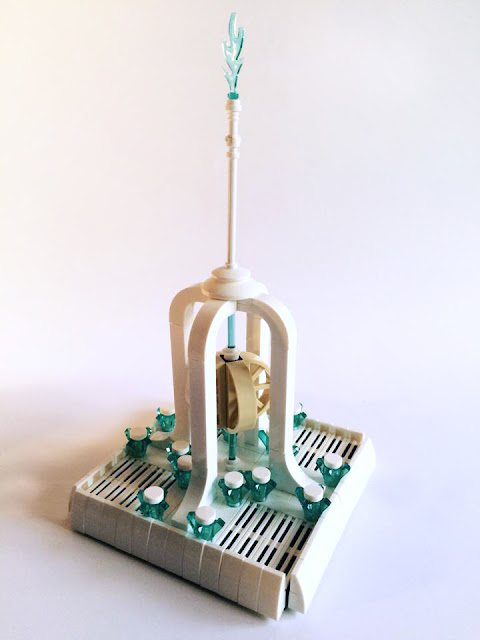 James Pegrum went archtastic with his build and the bow window looks stunning when combined with a gothic arch and a central pillar below. 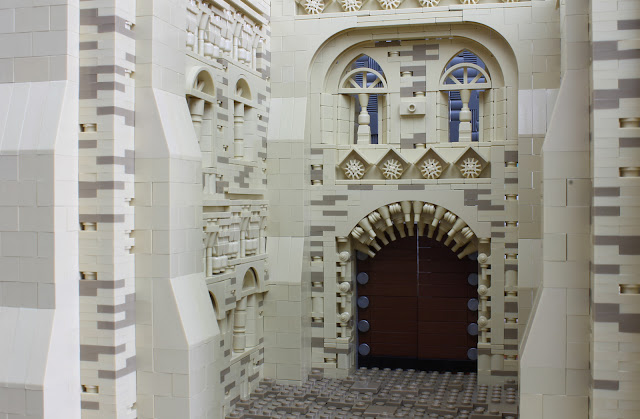 On the left wall of James' build you'll see that he placed the bow window inside the 1x6x2 arch - although he couldn't resist the effect achieved by placing them each a little wonkily though! This brings us nicely, if backwardly, onto the intended use for the bow window: to be placed inside the 1x6x2 arch, as you can see from this pic by Gary Davis alongside a couple of fun variants...

Similarly, as Rod Gillies shows here, you can also wedge one inside the shape created by two of the new inverted half-arch piece. 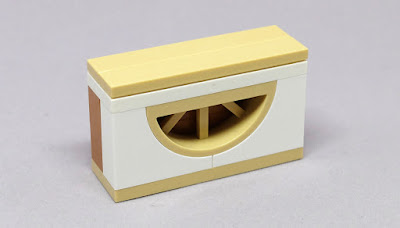 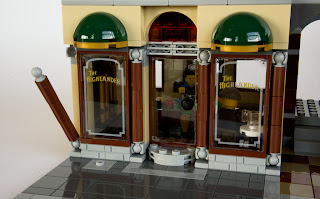 The bow window is further evidence that TLG raised the family of arches to permit pieces to fit inside them - both existing parts and those yet to be released. In fact, evidence came before the release of the bow window; in the January 2015 Modular set 10246 Detective's Office, LEGO designer Jamie Berard used the new raised 1x6x2 arch in combination with the 4x4 dome for the pool hall awnings. This is not possible when using the old 3307.

There is a further twist in the tale of this arch. In my March 2014 post about raised arches I was confused by the redesign of the 1x6x2; the other sizes of arches were all redesigned so that the distance between the topmost point of the curve and the top edge of the brick were equal to one plate (or multiples thereof), but for some reason part 12939 was thinner. It now transpires that this must indeed have been a mistake on TLG's part, as the 1x6x2 arch has been redesigned again and assigned a new Design ID: 15254. Let's look again at the 1x6x2 arch from 2015 and the 2014 version; there is a small  gap in the latter.

In 15254, the distance between the top of the curve and the top of the brick is now the same standardised thickness: one plate. I'm not sure precisely how quickly the problem of 12939 was rectified; they are (rightly) not being distinguished on BrickLink, and the TLG database (as used by Brickset) shows part 12939 appearing in only a few colours.

12939 is therefore a little defective quirk; but is it any use? Could this minuscule difference be leveraged in a build? I did identify one possible use for 12939's odd dimensions in my original post; you can stack five plates inside it. This would not work with the newer 15254.

Whilst this tiny design tweak is of little use, it is pleasing to know that TLG have standardised all arches,  and also thrilling to imagine that one day we might even see new bowed windows or bricks which are designed to fit under the other arched bricks.


Our thanks to the LEGO Community & Events Engagement Team for providing these parts. Consider using our affiliate links to buy stuff; this helps support New Elementary!

Posted by: Admin Posted on 11/25/2015 09:46:00 pm
Email ThisBlogThis!Share to TwitterShare to FacebookShare to Pinterest
Labels: Most popular, Parts Festivals, Technique