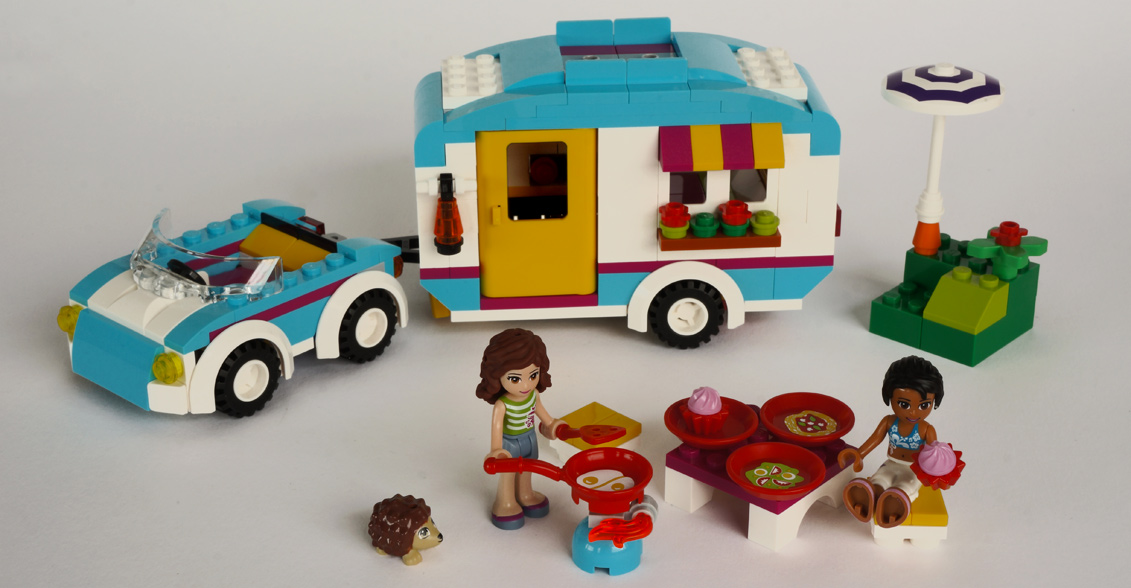 The car is your typical Friends-style vehicle; six studs wide but compact in length and super-curvy. Consequently there's a lot of plates and bows involved and SNOT for the bumpers, whilst the short length is achieved by using 1X3 double-ended inverted slopes. The use of part 47457 makes for an interesting hood. Of course, the main focus of the build is the beautiful caravan. 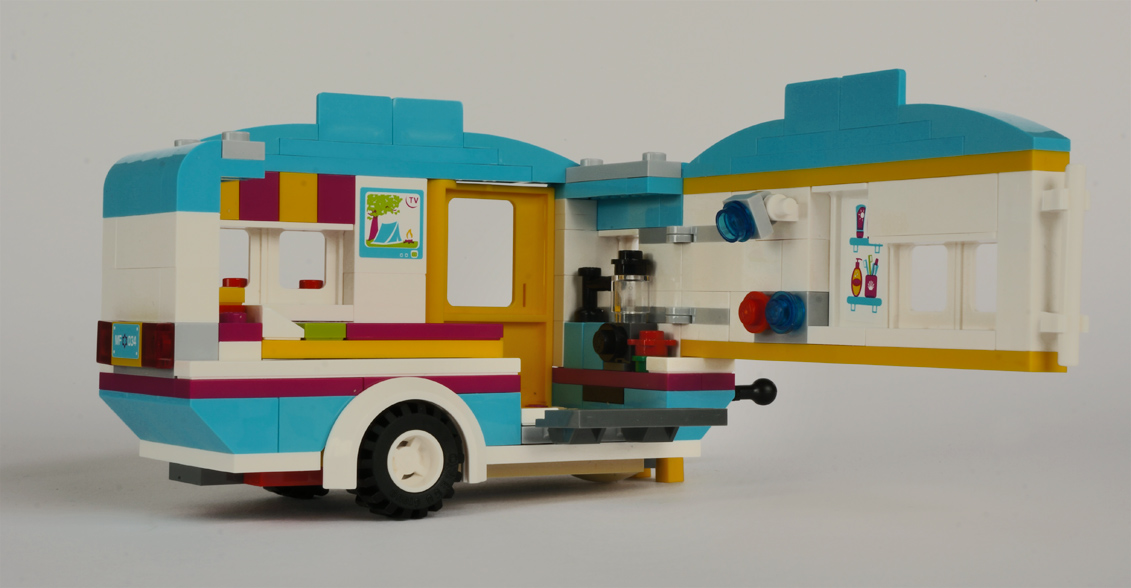 It's a nice intricate build thanks to the immense number of details crammed inside and once again puts paid to the myth that Friends sets are somehow dumbed-down. With one side wall hinged and a removable roof, there's plenty of access to the interior so you can play with the kitchen, shower and two beds. As if that wasn't enough, the beds can be removed to reveal a storage area for the camping equipment!

And that is not the only natty storage area included in this model. Having built the camping table and chairs early on in the build process, it's a thrill to discover at the end that these all fit smartly together on the roof! Whilst this is no 10244 Fairground Mixer

, it's really neat to be able to pack everything away and drive off and this kind of detail really enables kids to create a narrative during play. 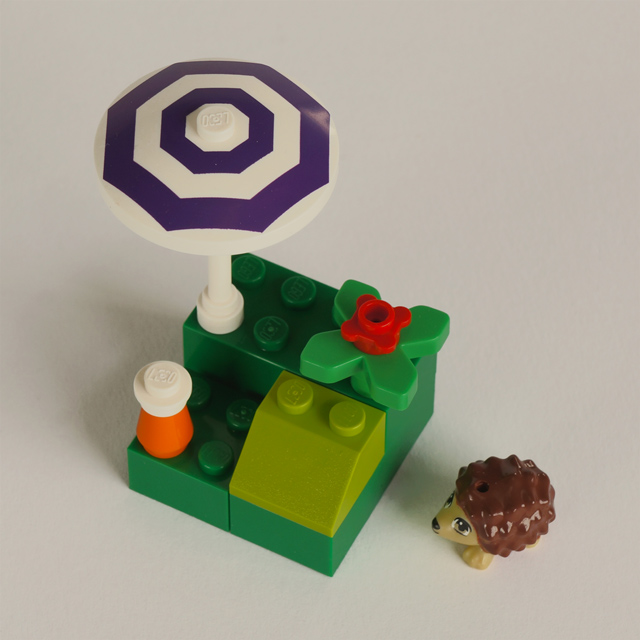 The dreariest section of the set is a lump of greenery made of three 2X4 bricks and a 2X2 slope. Yes, really. Given this is a camping set I suppose it was deemed necessary to refer to nature somehow and this does add playability to the set by giving you somewhere to place the minidolls - under a smart umbrella with a cooling beverage. But the simplicity of the build feels insulting and looks too blocky compared to the delicate details in the rest of the set. If nothing else, perhaps this ugly chunk will provide an impetus to kids to build their own larger environs. 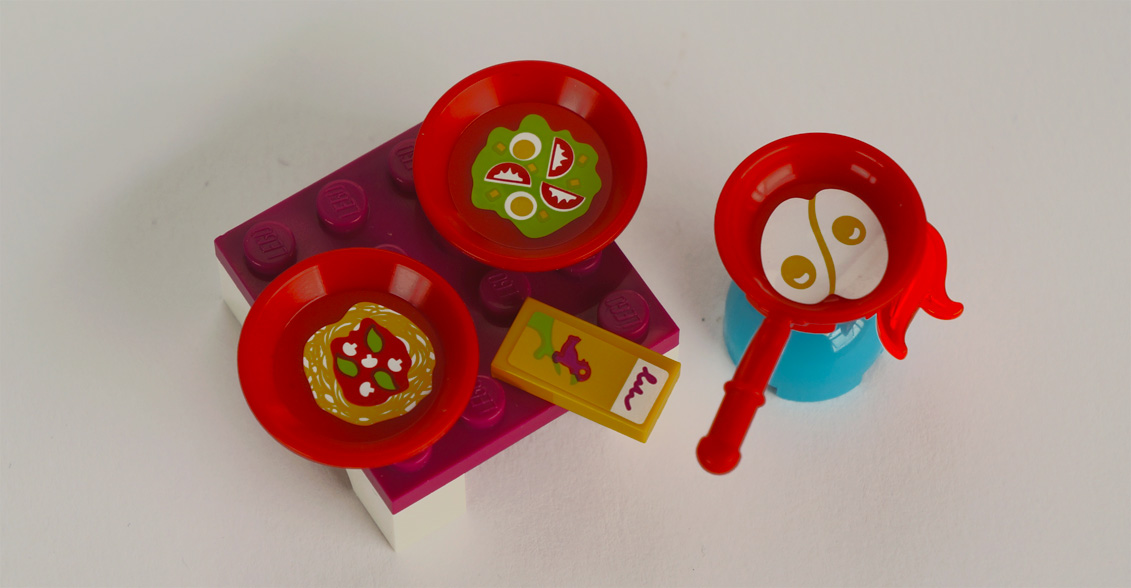 I really like the stickers provided: they are so useful I actually applied most of them. Here you can see the food and a sweet little birdwatching book. Inside the caravan, I also applied the TV and shelves of bottles. Other stickers that I didn't apply (as they get applied to parts that I didn't want to lose) are some bedspreads, patterned seating in the car, the usual vehicle bumper stickers and some cute bunting that goes on the caravan door. Train builders will be pleased to see that this door is a 1X4X5 right-hand train door in Bright Yellow [TLG]/Yellow [BL] (Element ID 6071242  | Design ID 4182), which only ever appeared in 7735 Freight Train in 1985. Unfortunately there's no left-hand version required for this set though. On that note, let's move onto other rare and exclusive pieces in the set. 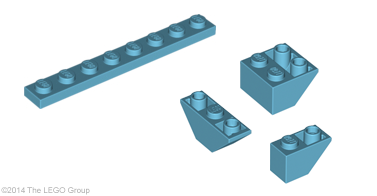 , currently only available in the US.

I really love this set, in fact it's one of my favourites of the year. Whilst the car is nothing to write home about and the greenery absurd, the caravan itself is exquisite and charming. The shape has been captured perfectly and this is one of those sets where the Friends colour palette used is actually something you'd conceivably see in the real world... so perhaps this could be a 'crossover' set for those of you with City layouts. There's a refreshing absence of pink and lavender shades, opting instead for the bolder Friends colours, and the part selection is great for a smaller set. 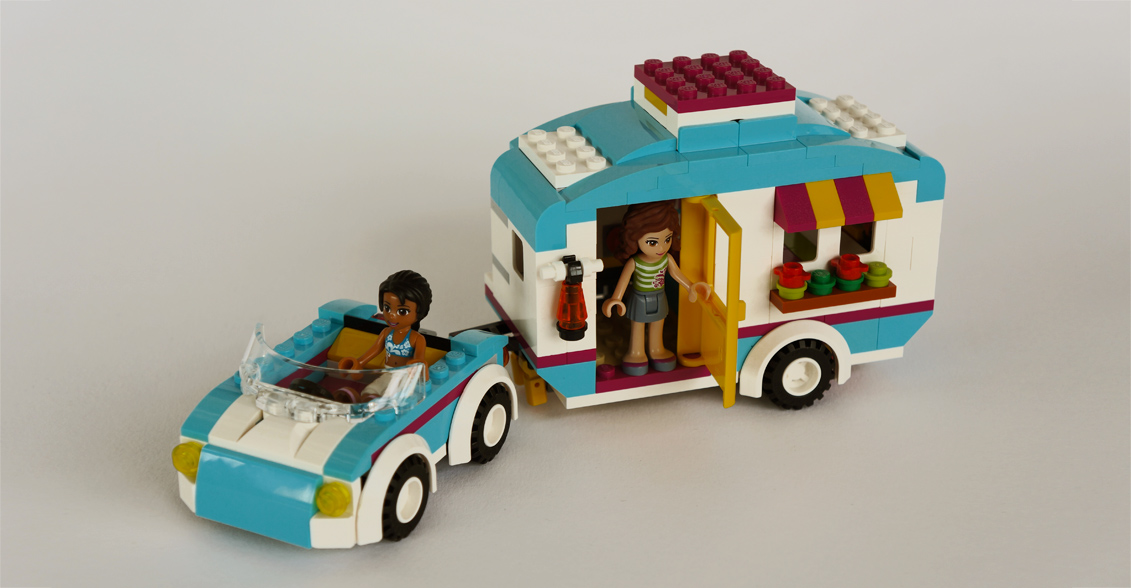 This set represents what Friends is really all about for me: absorbing details and clever design features that make you want to play, arrange and create stories. I find sets like this far more involving than most City sets.