The larger sets in this wave have obviously been built around a large play feature somewhat to the detriment of appearance, especially the Fire sets. This might not be how adults would like to see them but it certainly makes them exciting to play with. I’ll talk about how this affects this set a bit more later on. 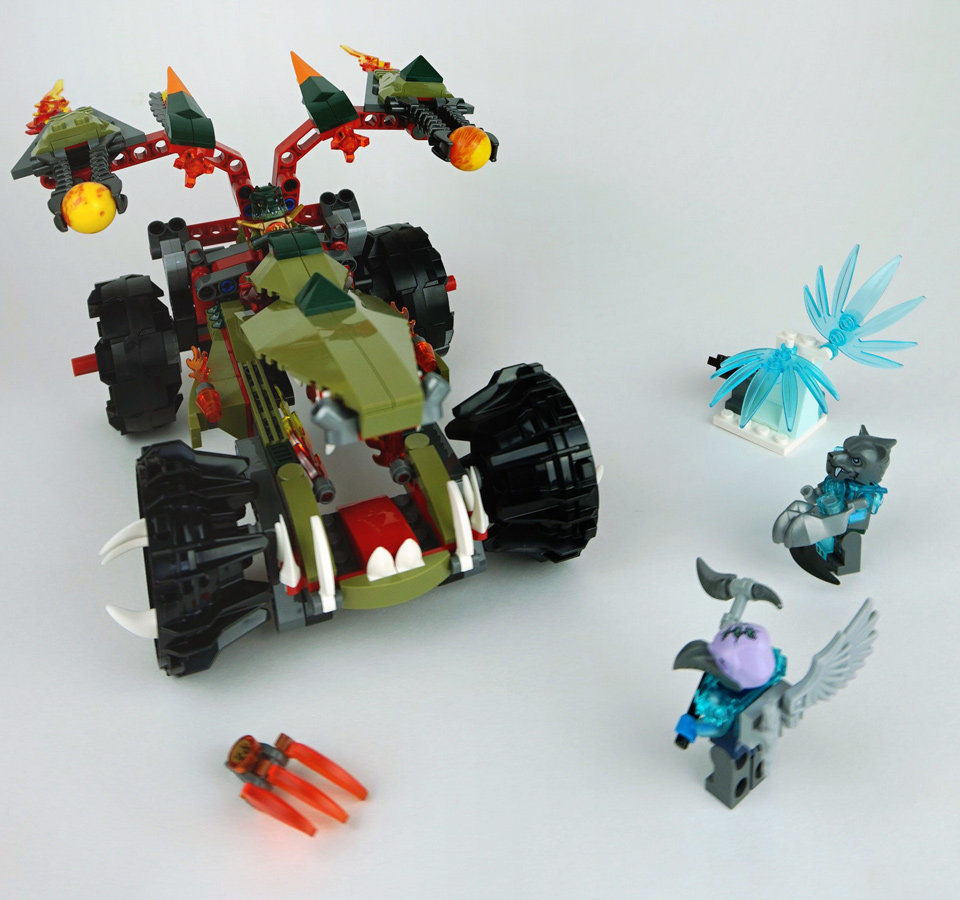 Before I get into the nitty gritty of the review I’d like to indulge myself a little and let you know why Legends of Chima is a line I’m particularly interested in, and hopefully pass on some behind the scenes information you might find interesting.

Early in 2011 I got an email from Adrian ‘Olog’ Florea. Famous for his MOCs as an AFOL, he had recently become a LEGO Designer and had been tasked with recruiting four AFOLs to take part in a development workshop. How could I say no? In what seemed like no time at all I was on a flight to Billund, the holy ground of LEGO HQ. Once there I met up with the other three AFOLs and we soon started speculating about what we were going to be doing and just how excited we were to be doing it.

After a brief introduction to the ‘fuzzy front end’ team that we were working with we were shown some artwork based around minifig animals, their tribes and vehicles, castles in the sky and power crystals. Animals riding animal-shaped machines fighting each other for energy? We could work with that! The next three days were each filled with 12 hours of building and lots of discoveries. We worked together as a team, helping each other out, so many of the models created were collaborations. Legends of Chima was still very much in development at this time; the idea of Chi was there and I remember making lists of which animals should be good or evil but we were mostly there to build. Of course LEGO Designers were there as well but I think us AFOLs were drafted in to help get new and different ideas flowing. We were encouraged to cut and spray elements which felt very wrong at first but I soon got into it. I saw stuff I still can’t reveal but most things have been released by now. Resin versions of the ball and socket joints that would eventually end up in the Legend Beasts struck me as having all sorts of possibilities and I saw Lord of the Rings models before it was known LEGO had the license. There was also a lot of strange and new colours and these weird doll-like minifigs, what could they be? 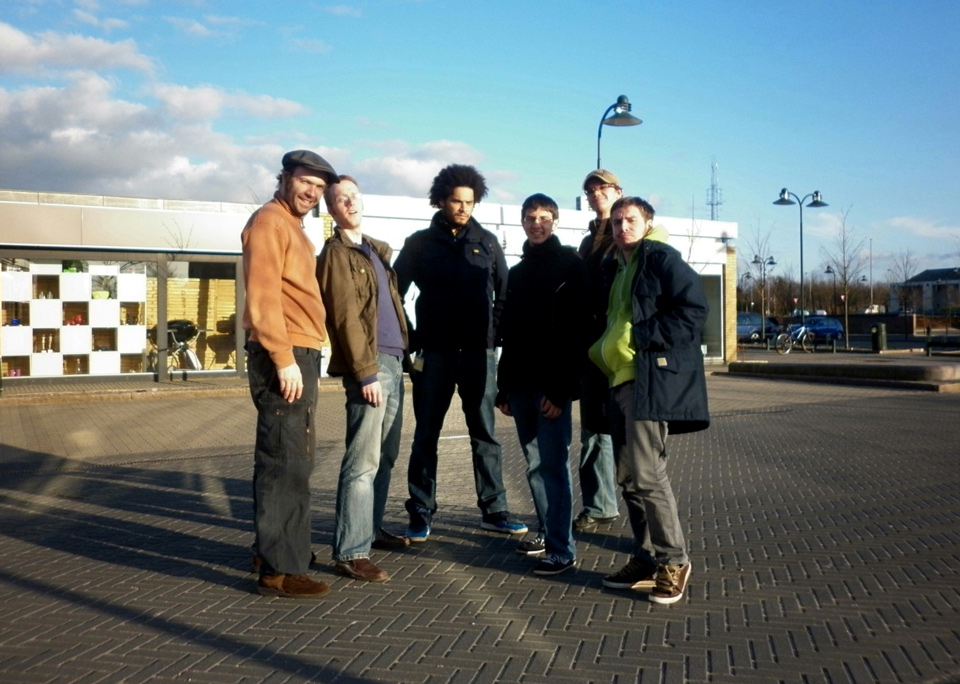 Photo of the Billund 2011 gang. Left to right; Cole Black (AFOL), Tim Goddard (me), Shamisenfred (LEGO Designer and AFOL), Stefan Schindler (AFOL), Tuomas Kukkamaa (AFOL) and Adrian Florea (LEGO Designer and AFOL).
Most of the building was done from large sets of drawers on wheels sorted much like an AFOL would have. And then there was the basement. Racks and racks of every brick currently in production, many of which had yet to reach retail. Heaven.

I can’t say that anything I built over those three days ended up as a set but I’ve definitely seen hints of some of the things I created particularly in the first two years of release. I’d love to see those models again but of course we could not take any pictures at the time, confidentiality was strictly enforced.

But I should really talk about the set I’m reviewing. To sum up, it’s a crocodile wheeled tank which shoots fireballs. The build is very Technic-heavy as everything is designed around the ‘Fire Chi Power mode!’ Essentially the model is a hollow rectangle with a wheel on each corner and a lever mechanism that is an impressive piece of LEGO engineering. 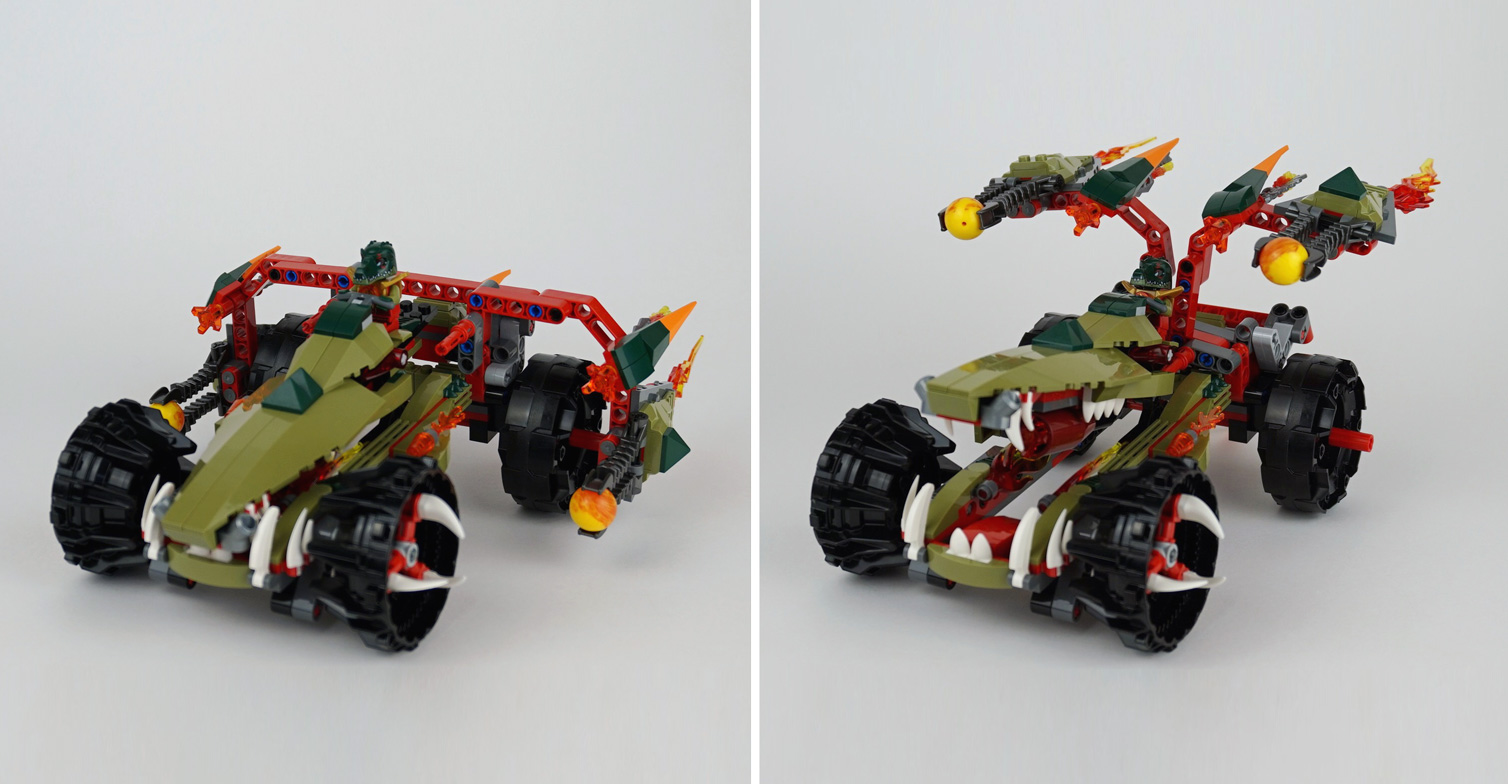 Pushing the ‘tail’ down opens the mouth and folds up side panels with the ubiquitous projectile launchers. I’m never very keen on building this type of System scale model which is dominated by pins and beams. I guess the reason this type of set doesn't appeal is because it is nothing like how I build; it uses lots of the types of pieces I use only sparingly and is really annoying to take apart again. On the plus side the unfolding mechanism is very strong and works flawlessly every time and to good effect. On the negative side it makes the model look unfinished with exposed colours and beams that take away from the overall look. 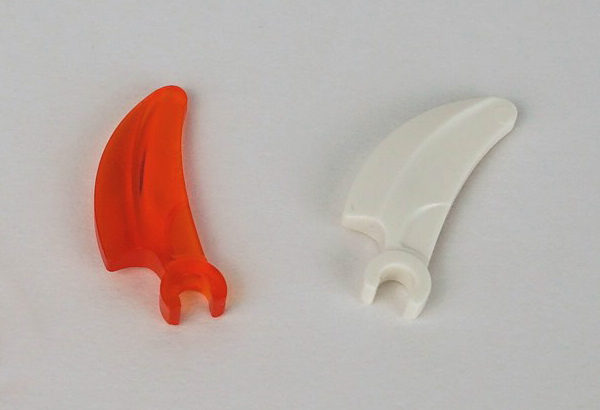 There are some interesting parts and a few new ones. LEGO's recent obsession with claws continues with a new type with a clip: two White ones (Element ID 6072900 | Design ID 16770) are exclusive to this set and there are three Trans-Orange [BL]/Tr. Br. Orange [TLG] versions (Element ID 6070057), which also appear in various other sets just released. 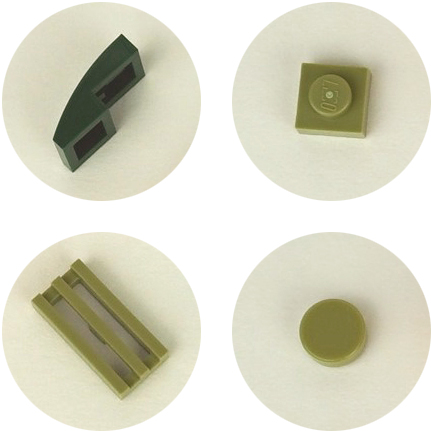 When Tim J asked which sets I would like to review from a list, one of the reasons I chose this set was two Technic pieces. Neither are new but both are comparatively rare. The three-long Technic connector with 2 pins and centre hole in black (Element ID 6055630 | Design ID 15461) has only been in 42021 Snowmobile

before, but is suddenly in loads of sets just released. It strikes me as having all sorts of possibilities, not least a micro Star Wars frigate. The other piece is the weapon barrel in Light Bluish Gray [BL]/Medium Stone Grey [TLG] (Element ID 6039505 | Design ID 98585). First seen in the most recent UCS X-wing, I’ve been waiting to get hold of this nice textured piece for ages. Perfect for Building the Future. 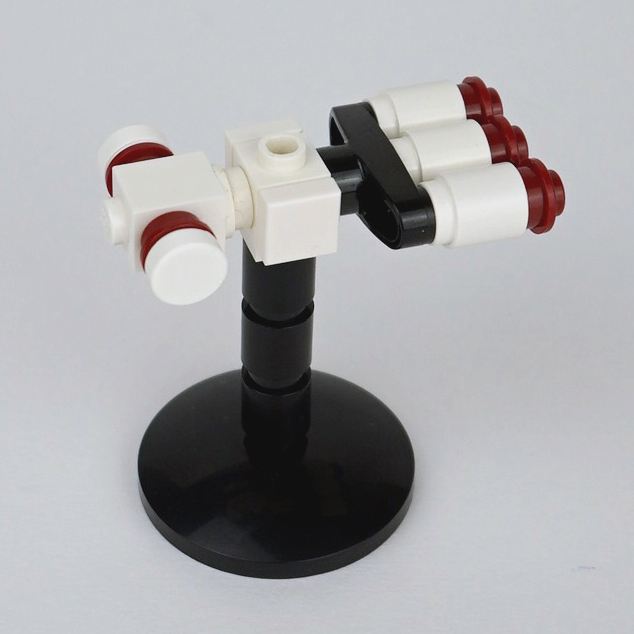 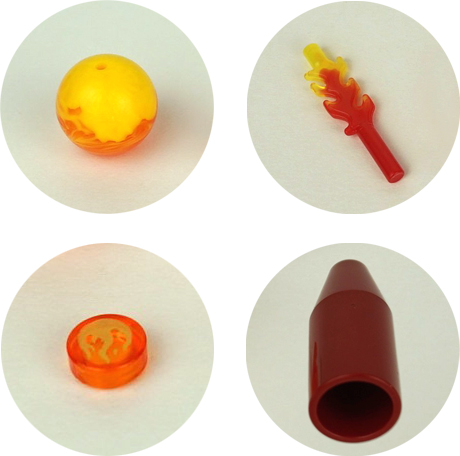 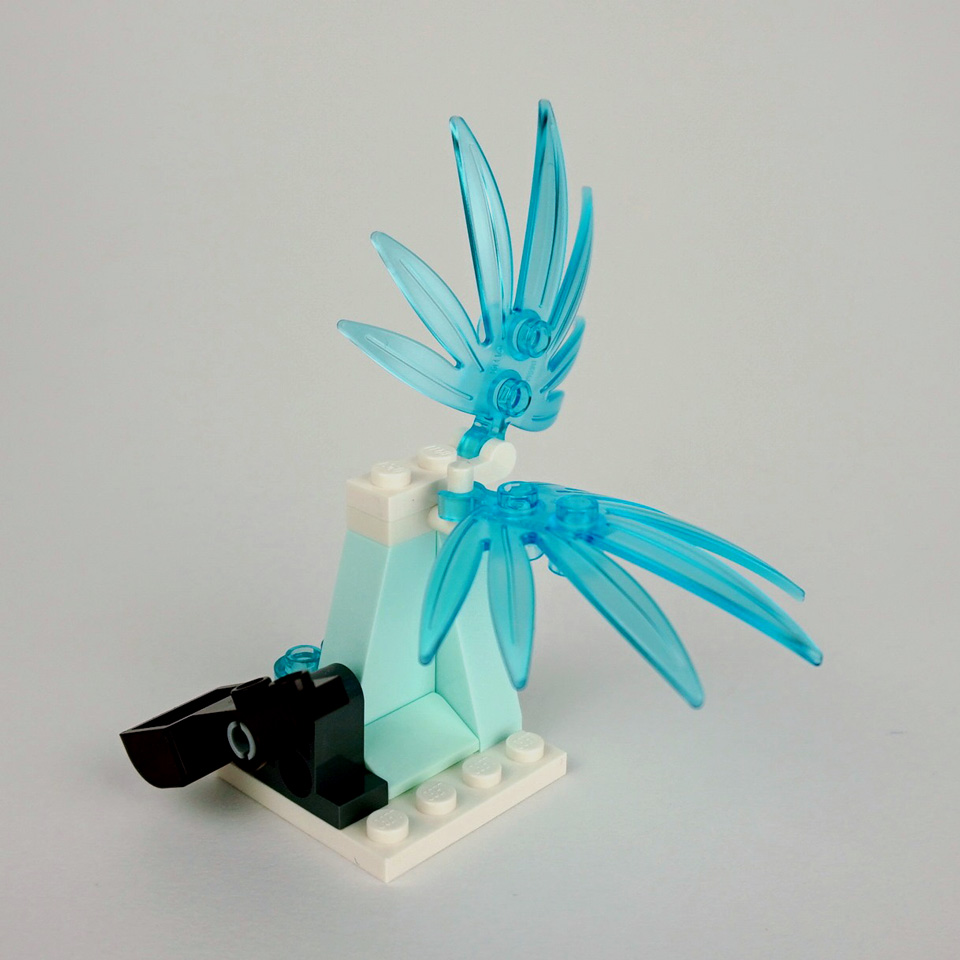 Also noteworthy are the left leg and right arm in this icy colour. New Elementary is intrigued by these new trans limbs. We’ve had trans heads and hook hands before, but never limbs. Can we expect to see a full trans hologram/ghost figure soon? The polycarbonate used to make most transparent parts is tricky stuff, it shatters much more easily than ABS and can stick to itself which is why you should never put a trans bar in a trans round 1X1 brick, for example. But as trans limbs are a new introduction does this mean LEGO are using something new? It was time to deploy science to find out.

The following spectrum is an FTIR (Fourier transform infrared spectroscopy) scan of a trans arm from this set and it shows that it is indeed polycarbonate. There are a few minor differences from pure polycarbonate, but this is probably whatever has been added for the colour. It looks like official fully trans figures are not quite with us yet. 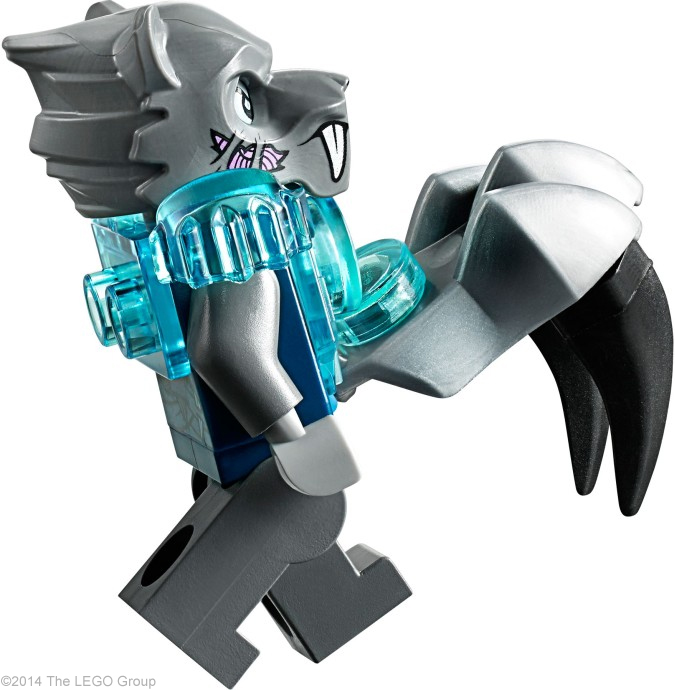 There are various other new minifig related pieces as well which you can see in the pictures, some of which will be discussed in future Chima posts. But surely the most exciting piece so far this year is the 1X2 plate with angular extension and flexible tip in Dark Green and Orange [BL]/Bright Orange [TLG] (Element ID 6074624 | Design ID 61406). I look forward to seeing them all over Flickr in many and various MOCs.


All images © Tim Goddard except where otherwise indicated.
Posted by: Admin Posted on 7/05/2014 03:22:00 pm
Email ThisBlogThis!Share to TwitterShare to FacebookShare to Pinterest
Labels: Set review