Return of the Trans-Light Blue 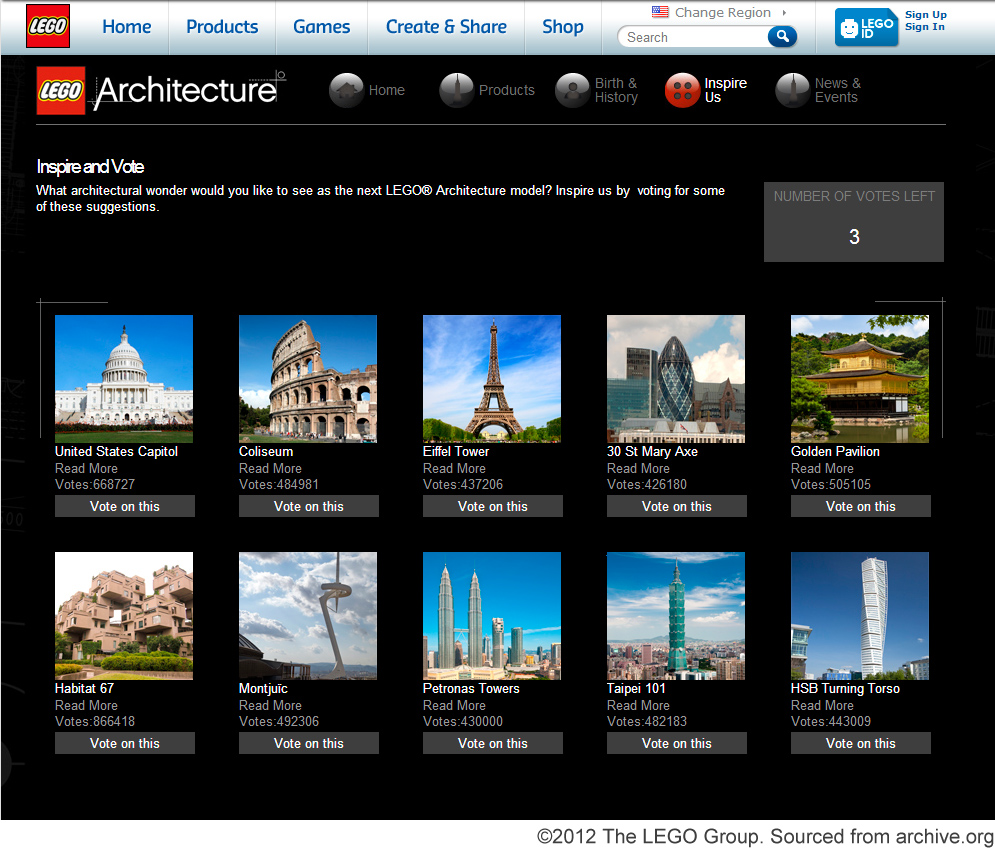 The official LEGO® Architecture website used to run polls where visitors could vote which building, from a list of ten options, should next get the official treatment. It was a rather odd idea, given that they clearly stated that there was no guarantee the 'winners' would actually get made into sets, which was indeed the fate of one of them. And as it turned out, two of the least popular inclusions have been turned into sets (The Leaning Tower of Pisa and The Eiffel Tower). Stranger still was the inclusion of some religious buildings, a subject which LEGO have steadfastly avoided releasing (aside from an innocent church in the 1950s) but given these didn't win, no embarrassment ensued. 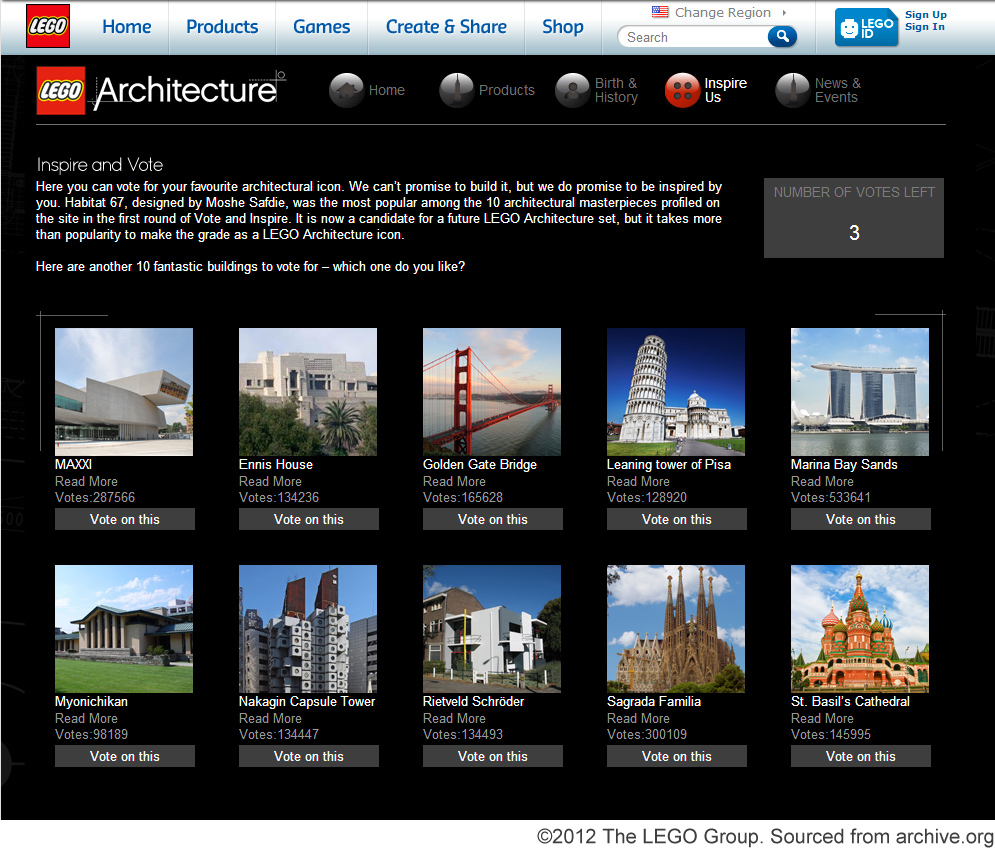 They only ever ran two polls and both winners (by an impressive margin) were buildings designed by the same architect; Moshie Safdie. The first was Habitat 67, a housing complex built in Montreal, Canada for the 1967 World's Fair. On paper it was a very appropriate candidate for LEGO, as the project's concept was to create a building complex using a kit of parts. Huge prefab concrete parts. Safdie's studio have even confirmed that LEGO bricks were used as a design tool during the early stages of the original project. Sadly, no official set of Habitat 67 has appeared since it won the poll in March 2012. I suppose it still could, but I fear it was deemed an inappropriate choice somewhere along the process... perhaps it couldn't be rendered very nicely at a cost-effective scale. Maybe it was just a boring model they didn't think would sell well. 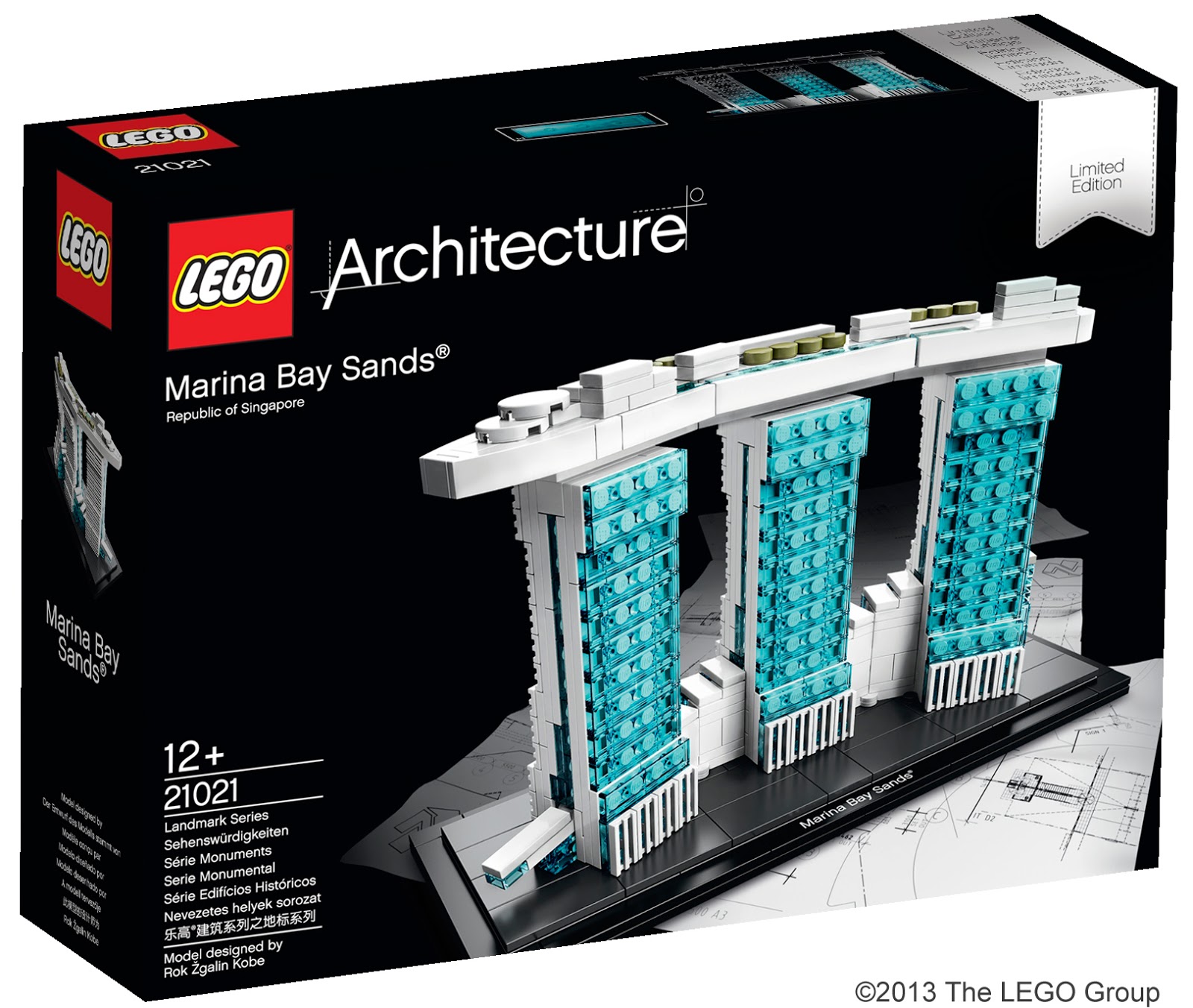 The good news is that the second winner, Marina Bay Sands, was released as set 21021 a few weeks ago. The bad news is that it is only available from a sprinkling of outlets in Asia and even then only in a limited run of 10,000 copies, which I'm constantly reading have sold out. So unfortunately the majority of readers will not be able to build this set, unless they devote a lot of energy towards getting their hands on any fresh stock before they are all snapped up for resale, or of course if they pay the resale prices being requested. Sadly, that's what usually happens when "Limited Edition" gets printed on a box of LEGO.

Of course, there is another way you can build the set; you might like to put your time and money into purchasing the elements you're missing instead. Lots of AFOLs seem to enjoy the challenge of creating sets this way. The 21021 Marina Bay Sands instructions are available for free download from LEGO's website. As for the elements, Rebrickable tells me that 37.5% of the required elements are in 21018 United Nations Headquarters

, so if you own that, you have a head start - in particular the rare yet voluminous Trans-Light Blue 1X2 plates. (Rebrickable is a wonderful resource, especially if you are good at keeping up your personal inventory of sets, which is easy with sites like Brickset.)

So in light of all these barriers, part of me would love to tell you it's a terrible set not worth bothering with, but in fact it brought many smiles to my face as I built it. (I am a big Architecture nerd admittedly.) It isn't the greatest Architecture set out there but is very good, and has some nice parts and some very fun and unusual techniques. 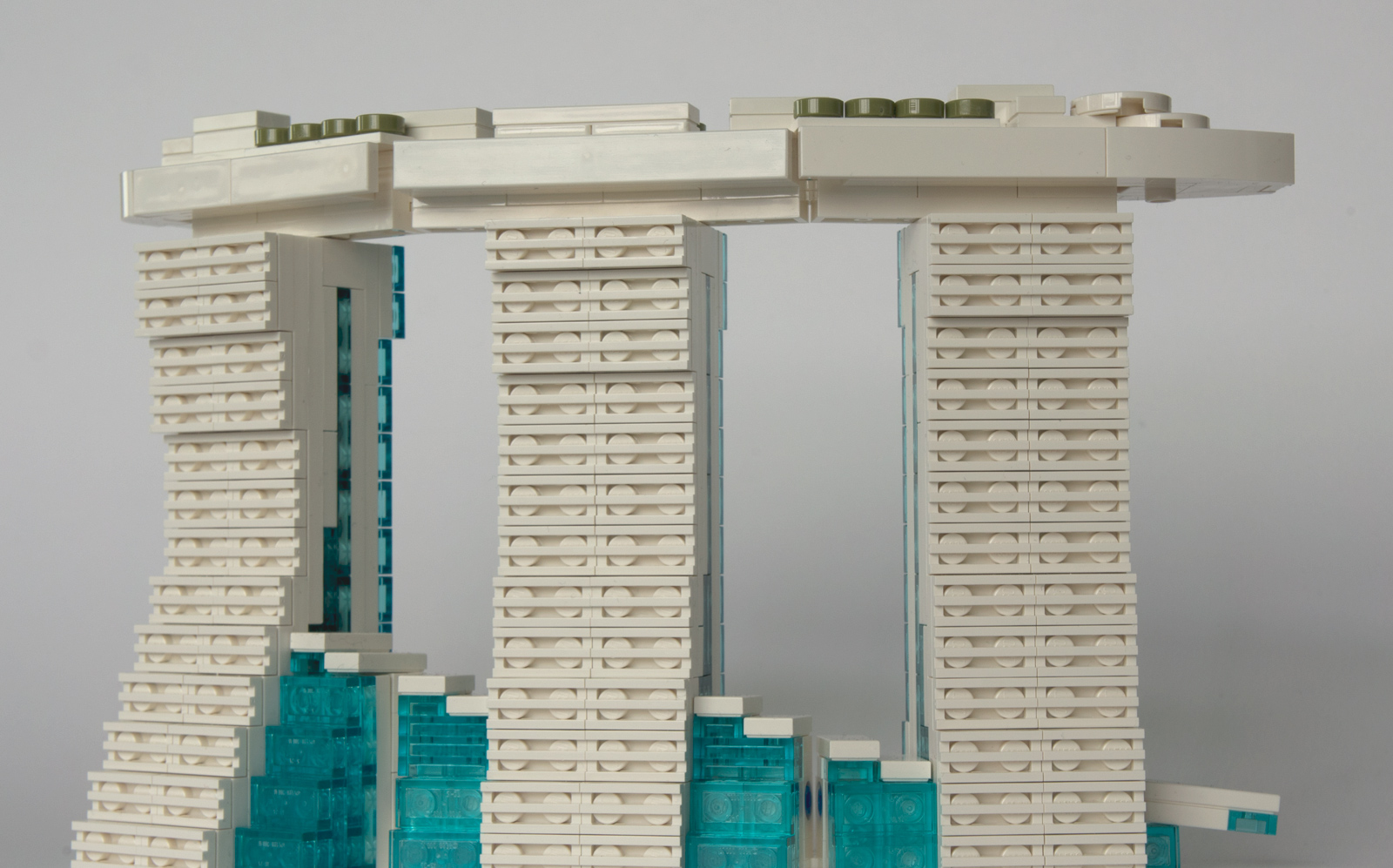 If you enjoyed reading about an Architecture set with lots of White and Trans-Light Blue [BL]/Tr. Lt. Blue [TLG] in my previous post about United Nations Headquarters, well you're in luck because this is another one. The most exciting elements are probably the same ones that come in United Nations Headquarters, namely the 1X1 and 1X2 plates in Trans-Light Blue. Marina Bay Sands has more 1X1 plates (19 as opposed to 14) but less 1X2 plates - hard to complete with the 155 in United Nations Headquarters, but the 98 you get here are hardly to be sneezed at! Also in Trans-Light Blue are 39 1X4 tiles, which aren't new or especially rare, but that's a great quantity nevertheless. Other nice quantities of common elements in the set are the White plates; 22 1X1s, 21 1X4s, 17 2X4s and 11 1X10s. There's also 20 of those useful 2X4 tiles in Dark Bluish Gray [BL]/Dark Stone Grey [TLG]. 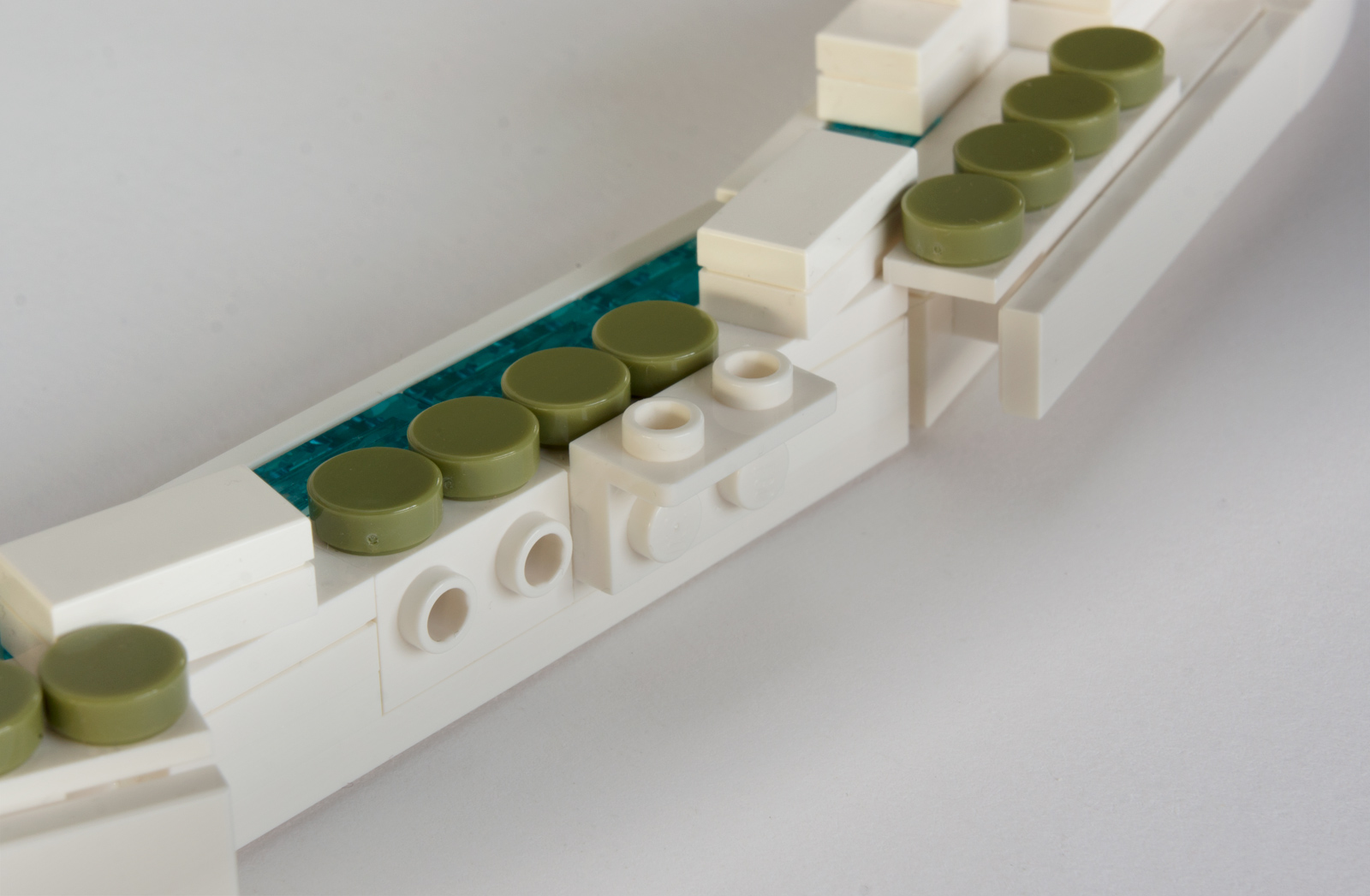 I was a little sad, when reviewing 70126 Crocodile Legend Beast, that the Olive Green 1X1 round tiles had printing on them. Well, there are 13 clean ones here which is an exclusive for this set - or rather it was for a couple of weeks because, as regular reader Aanchir pointed out, they now come in the new Chima set 70133 Spinlyn's Cavern. There is still an exclusive in this set though (but I doubt this record will last long either); two White 1X2/1X2 inverted brackets (part 99780, as seen in the above picture of the deconstructed roof). This was my favourite part of 2012; fantastically useful. Great to see it now comes in six colours (including Sand Green!). Finally, of course, there is the 1X8 printed tile with the name of the building. It comes only in English in this set.

Amongst all this loveliness there are virtually no bricks; only three 1X2 bricks and that's it for your classic brick! There are a few textured, Technic and SNOT bricks though, but clearly this build will be a bit of a plate-stacking experience.... yayyy! 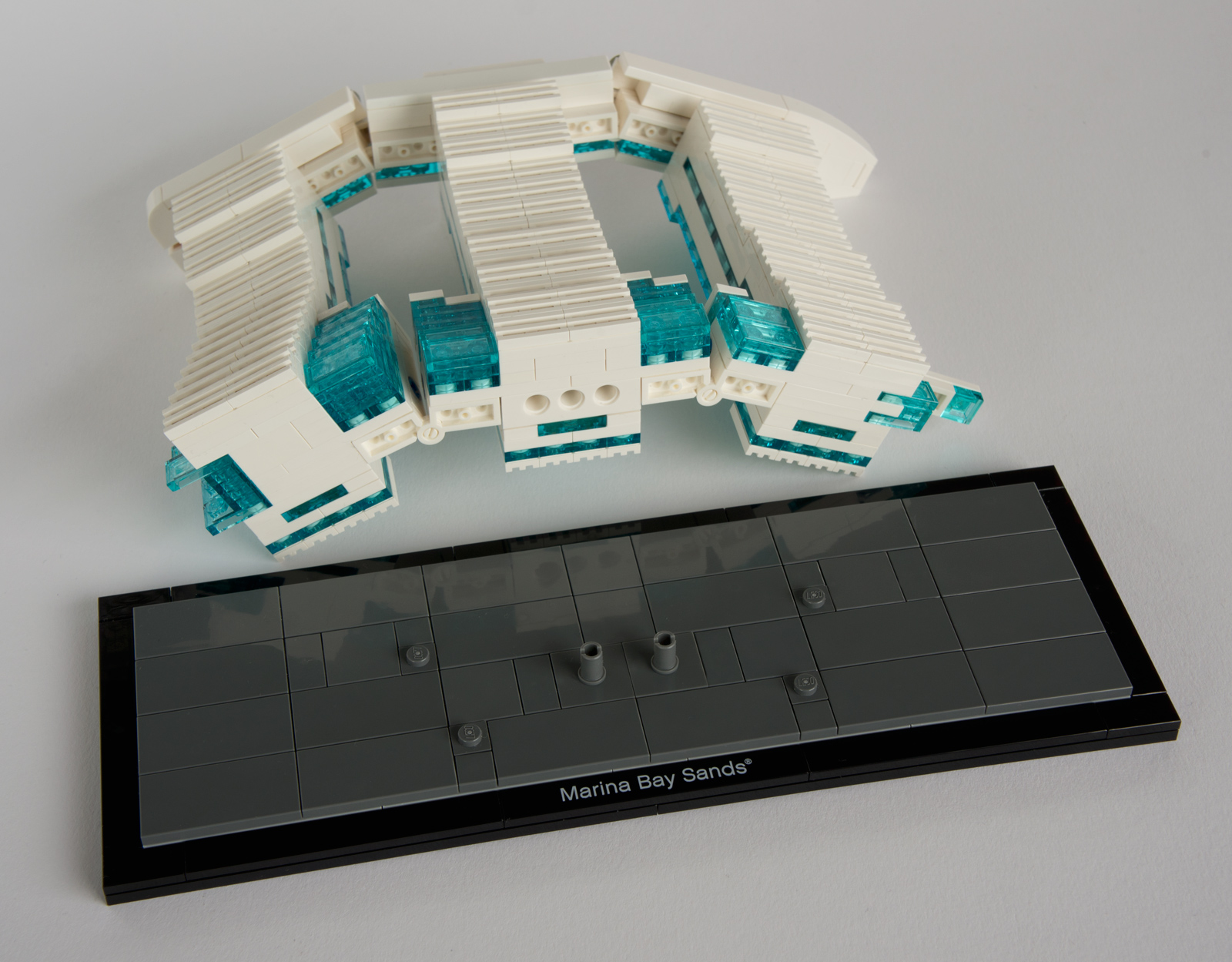 The base is a simpler build than usual consisting largely of 2X4 tiles, because there are only six connection points amongst it... and four of these are not even used as connectors! Only the two Technic snaps are used to attach the building, via the central tower; the other two towers attach to the central tower with hinges. Those four studs in the base are cleverly positioned to simply keep the other towers from rotating on their hinges. Although there's still a bit of movement, the finished structure is very dense and stable. The curvature of the roof mirrors the hinge usage at the base, so the towers are nicely sandwiched. 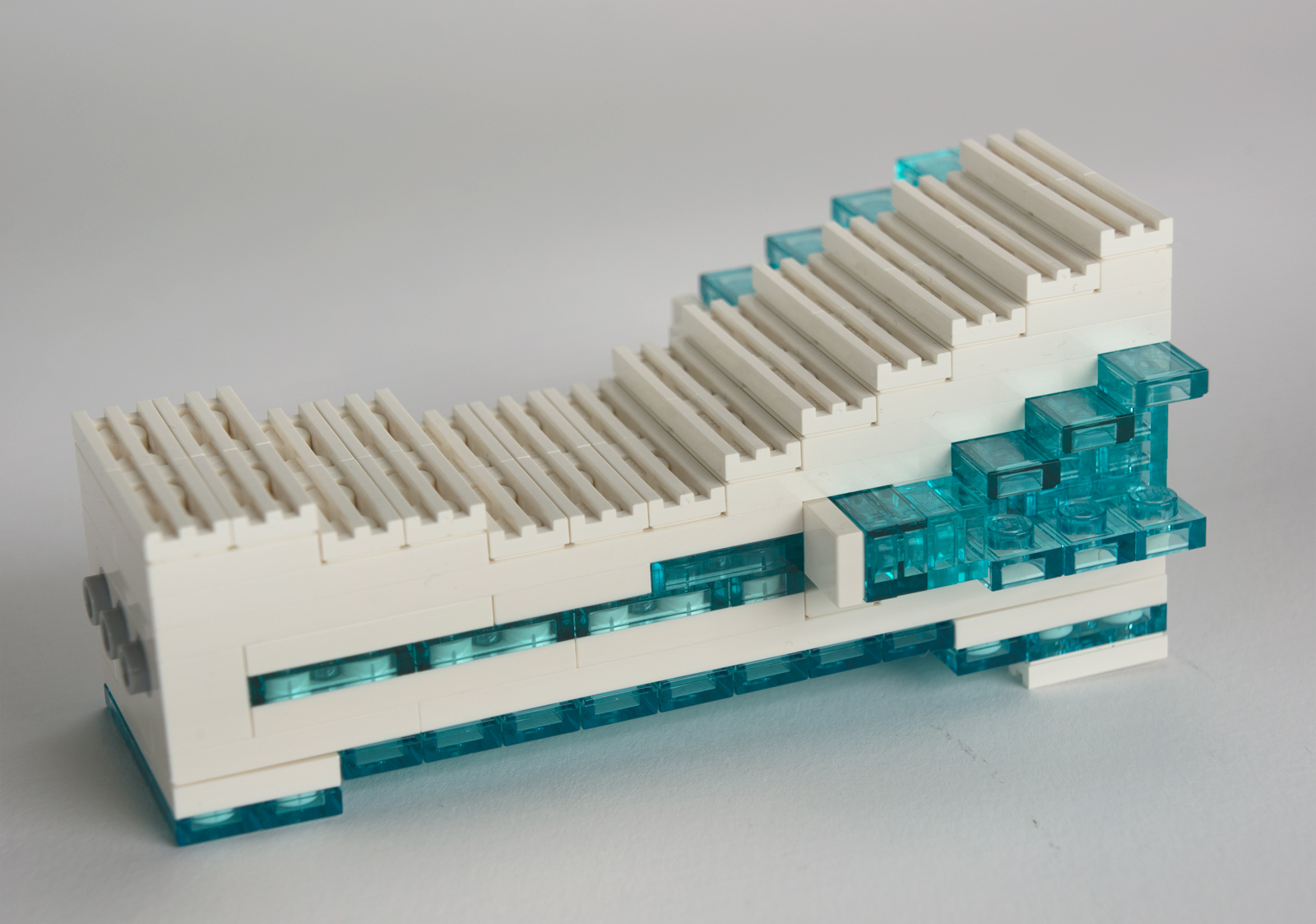 The nicest thing about this build is that the majority of it is built sideways; the three towers are long flat builds that get positioned vertically in the final model, to suggest the huge curved sweeps of the original. Each of the three towers is a bit different, so they're not a repetitive experience to build. Whilst they all use the same approach to construction - a hollow box built of plates - variations occur to achieve the differences in vertical curvature and the way in which the horizontal lower curved section of the building intersects each tower. These differences include various stepped effects and some 1X1 plate stacking (which is fun when you're using a lovely new colour of 1X1 elements!) and even include a moment where the 5:2 technique is used. 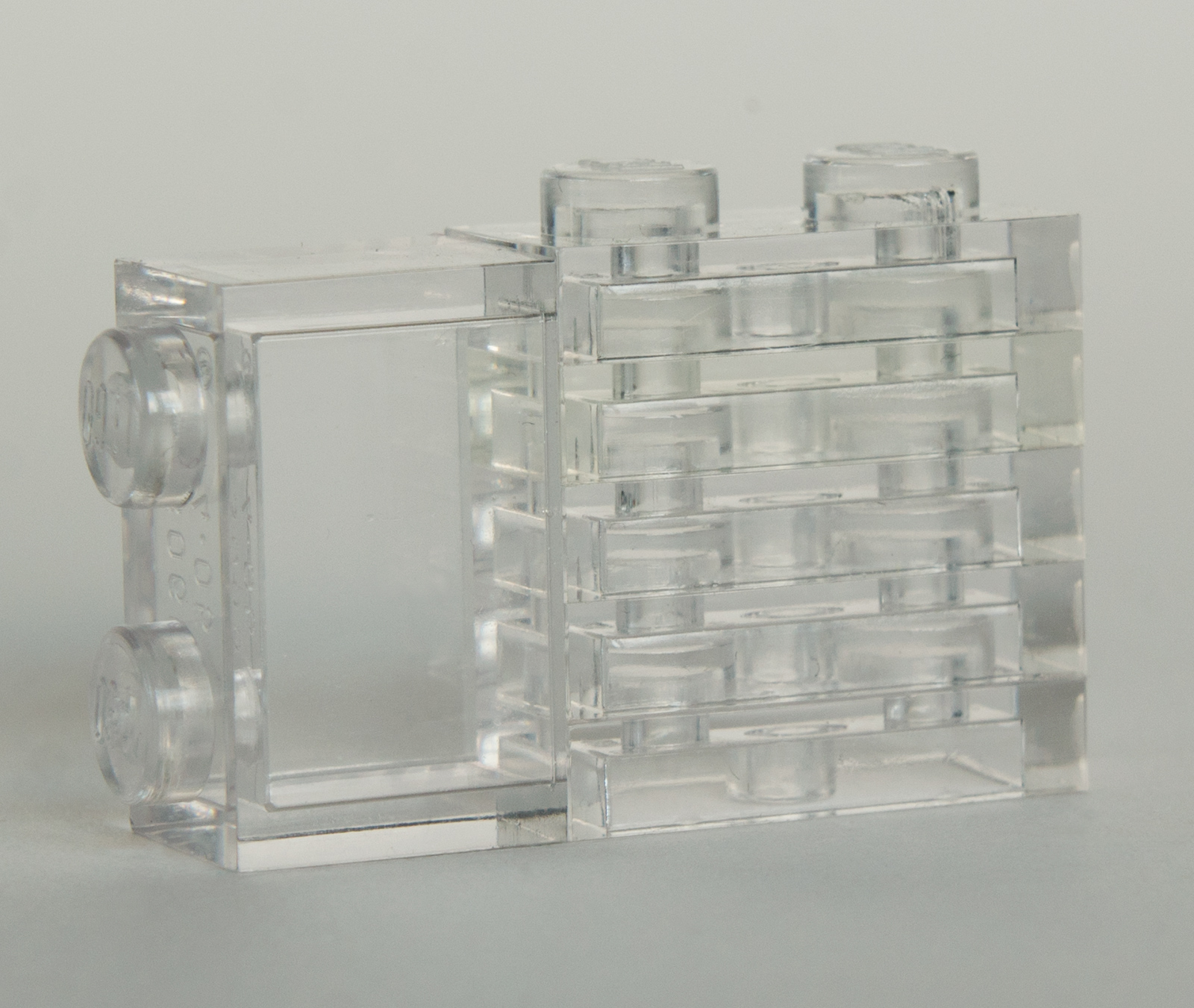 That's the technique where you make use of the fact that five plates are the same height (ignoring the studs) as the width of a part that is two studs wide. By setting plates sideways like this, you can achieve finer detail. It's an advanced technique not often used in official sets, but one famous example are the year numbers 'engraved' at the top of some Modular buildings. 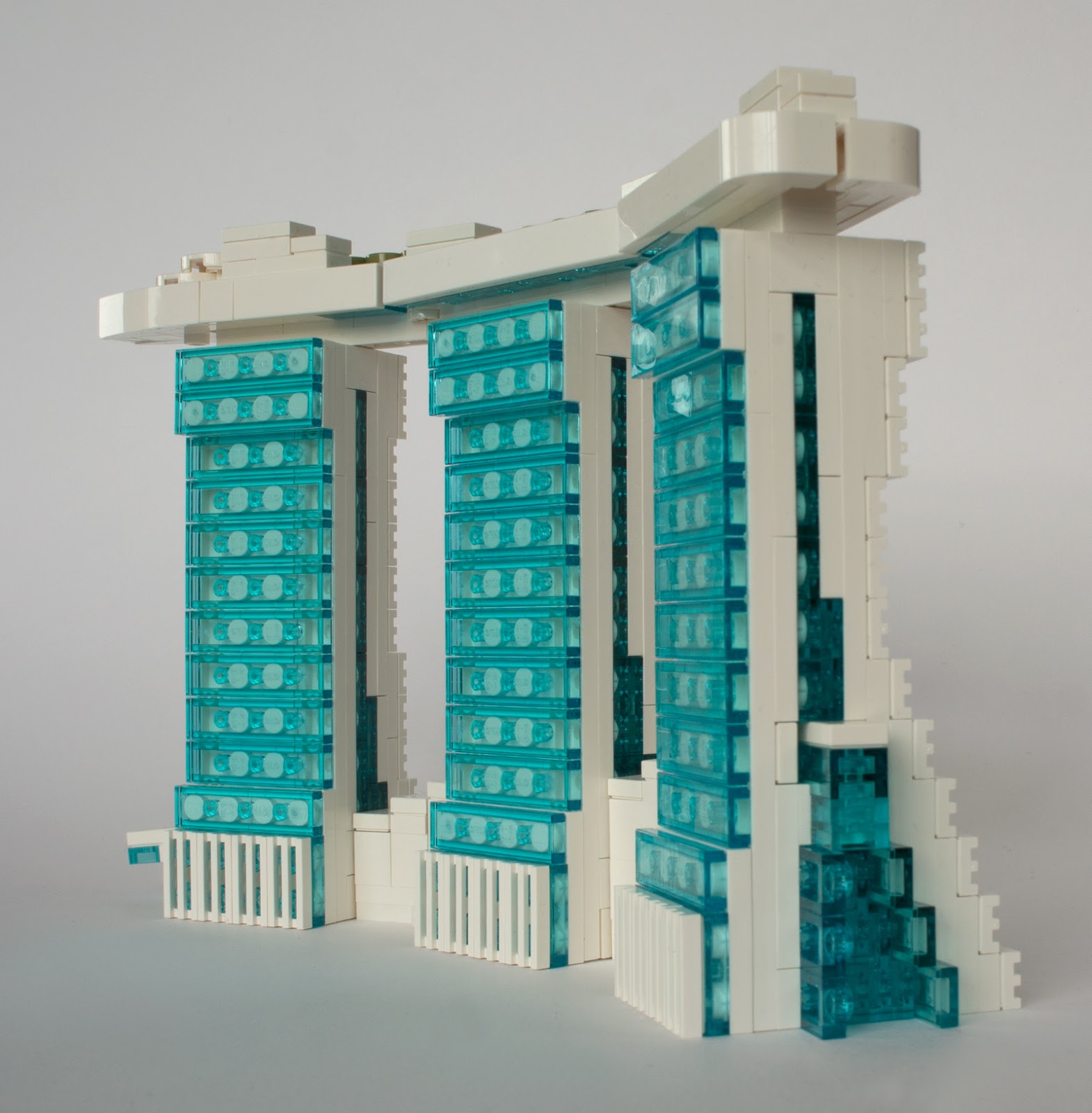 By contrast, the other face of each tower is exactly the same build for all three. I find it odd they chose this side for the main box picture; the other side is far more interesting thanks to the grille tiles and the variation in 'curves' on the towers. I suppose they decided the increased colour makes it the more attractive side. 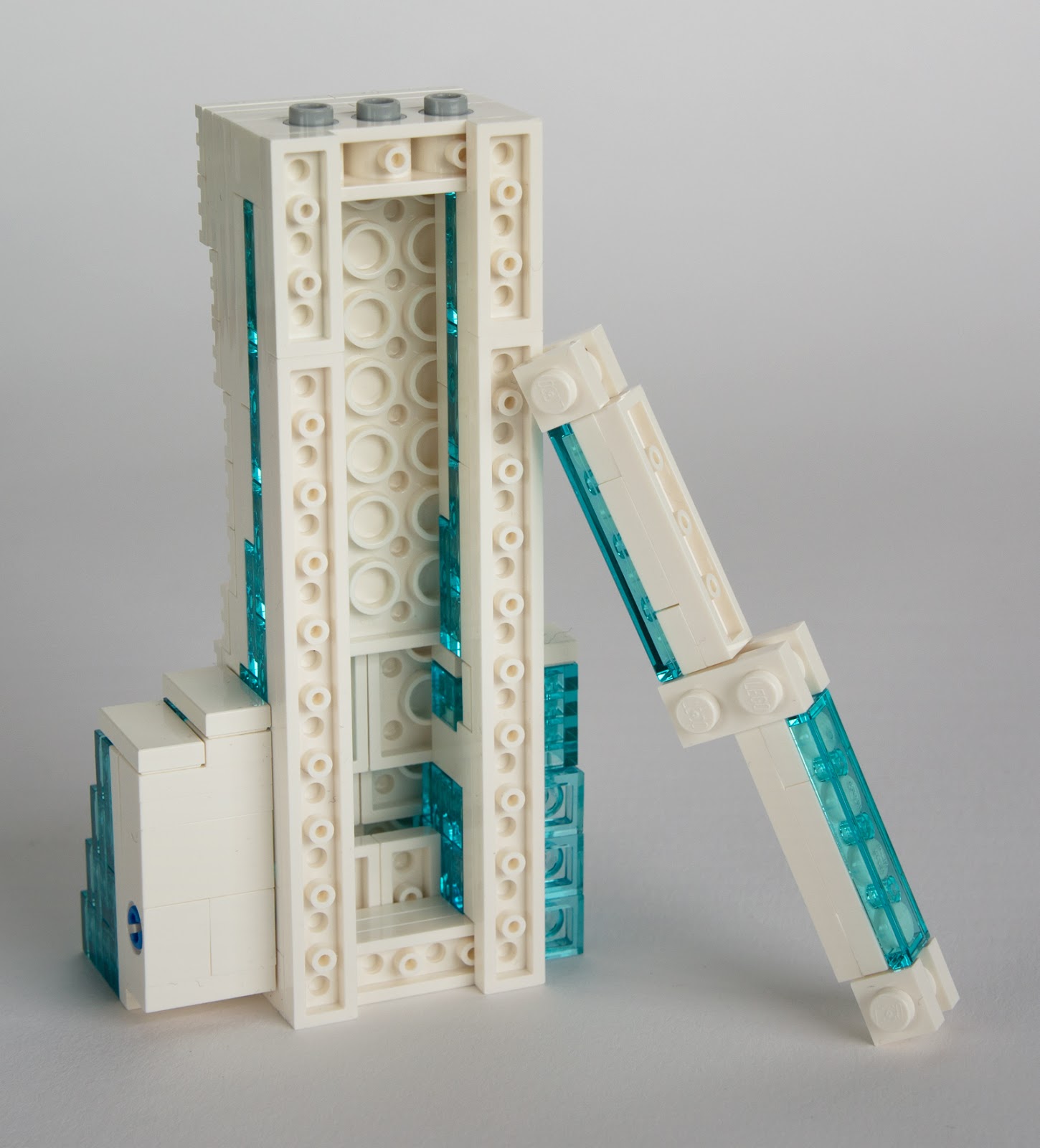 The attachment method for these sides of the towers is interesting however. A 180° reversal is required, so three of the very strange little submodels pictured here on the right are created using clip lights (part 4081) to achieve the reversal, then placed inside the hollow structures of the towers. The final side then attaches like a lid.

The roof is also a lot of fun with a mix of sideways and normal building and of course the aforementioned hinges. Despite being a funny banana shape, the Designer (once again, Rok Kobe) has managed to cover up a lot of the resulting gaps. He's included a lot of nice detailed SNOT work in this section and even exploited the new central antistud of the 2X2 round tile. Actually, the roof is the only part of the model to include curved parts (the other are those 1X1 round tiles, and four bricks with bows which make the corners). I mention this only because it's perhaps surprising for a building that barely has any straight lines in it!

I feel it was a good call to avoid curved elements for the most part. As with all LEGO microscale, you need to accept it's not a scale model. Using rectilinear elements to suggest curves helps the viewer remember that, but indeed the sweeping vertical curves of the original towers are somewhat lost in a model this small. So, not the most realistic model, but an attractive one in its own right with yet another interesting build from Rok Kobe. It would be fun to build this model at a larger scale; the towers could perhaps be achieved with a series of hinged plates, and the projecting end of the roof is just begging to be created with the six-wide boat/aircraft bottom (part 87611).

The age mark on the set is 12+ and that feels right for a minimum. LEGO still create the instructions with kids younger than the age mark in mind, knowing that they'll attempt builds anyway. I think 10 year-olds are the target with Architecture. Consequently, Architecture instructions aren't as hard as you might hope; certainly not as complex as the regular set instructions were back when I was 10! However there are definitely techniques employed that set most Architecture models apart, and in this case it's all the interlocking building in different directions and those odd 180° reversal constructions within the towers. Irritating as I find the 'dumbing-down' of LEGO instructions, it's actually a good thing in the long run. It allows kids to be introduced to ever-more complex building techniques (even 4+ models use SNOT bricks these days) which stretch their understanding beyond the traditional 'stacking' approach. Maybe once TLG feel that the children of the World have got their collective heads around that, they might actually give us what we've all been dying for... parts with studs on the bottom as well as the top!