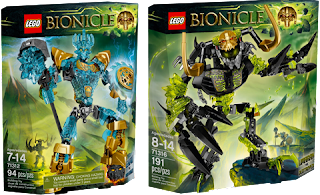 
If you don’t recognize these characters, let me refresh your memory. Ekimu is the legendary mask maker of the island of Okoto, previously depicted as a dwarfish character in last year’s 70795 Mask Maker vs. Skull Grinder (which my brother Andrew reviewed here). But now, he’s been transformed by the energies of a special crystal chamber into an energized, Toa-sized form. The shadow hunter Umarak was previously depicted in set 71310 Umarak the Hunter (which my brother reviewed here), but the energies of the Mask of Control, also presented in that set, have transformed him into a towering behemoth which serves the will of Ekimu’s evil brother, Makuta. 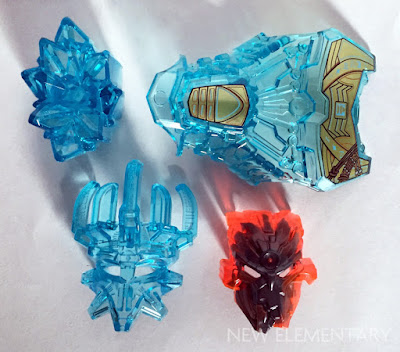 Let’s begin by looking at the new parts of Ekimu. The Mask Maker only includes one new mold, the crystal shell seen previously in Andrew’s review of the three Elemental Beast sets. It appears here in Tr. Light Blue, the same color as in 71314 Storm Beast (Design ID 25534 | Element ID 6150182), and is used for the head of Ekimu’s new hammer.

In terms of recolors, Ekimu wears the Mask of Creation in Tr. Light Blue (Design ID 20477 | Element ID 6145448), a brilliant new look for it. He also wears the same new torso shell as the six Toa released earlier this year, but now in Transparent Light Blue with printed gold armor and brown belts (Design ID 26419 | Element ID 6150073). In the center of its chest is a new symbol, a stylized anvil representing Ekimu, and to the left and right are the symbols of the six Toa, signifying Ekimu’s role as their mentor and spiritual leader.

Finally, the set comes with a recolor of Umarak the Hunter’s Hunter Mask, now in a blend of Titanium Metallic [TLG]/Pearl Dark Gray [BL] and Tr. Flu. Reddish Orange [TLG]/Trans-Neon Orange [BL]. The significance of this mask (Design ID 24164 | Element ID 6154810) is not entirely clear, as it does not appear at any time in the Netflix series LEGO Bionicle: The Journey to One. Perhaps it’s simply meant to be something for Ekimu to either seek out or smash if you don’t own any other Bionicle sets, or perhaps it is an artifact from before this year’s story was rewritten to make it Bionicle G2’s finale. Regardless, it’s appreciated, as the color combination looks quite striking! 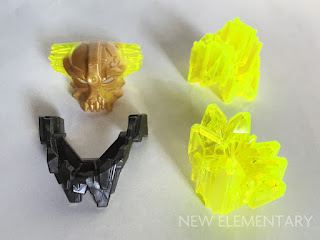 Umarak includes two of the same crystal shell as Ekimu and the beasts, but this time in Transparent Fluorescent Green [TLG]/Trans-Neon Green [BL], a unique color for this part (Element ID 6150528). He also features the same Titanium Metallic lower jaw piece used for the Elemental Beasts (Design ID 25528 | Element ID 6150531). 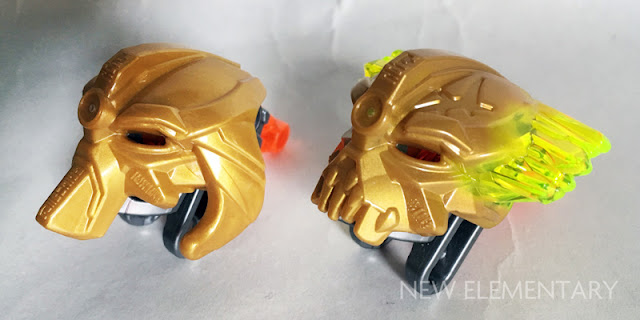 The new version’s chin has been replaced with a row of jagged teeth, and its horns with Tr. Flu Green crystal protrusions, which will wrap around much larger brick-built horns. It also has a sizable scar above the left eye, showing that the mask, too, has been damaged by Umarak’s unnatural transformation. 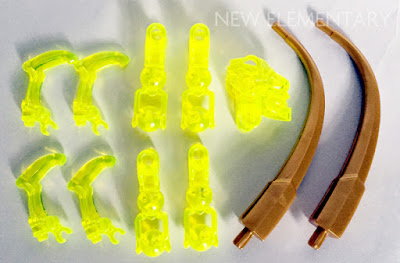 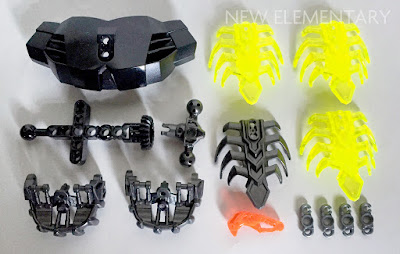 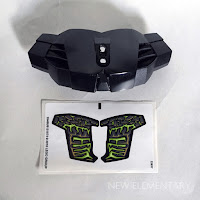 Because this set’s style of chest plate has never been available with printing, the set includes a sticker sheet with two stickers for Umarak’s chest. The stickers are textured with Dark Stone Grey rocks with Warm Gold highlights. Seeping out from the rocks are veins of Bright Yellowish Green ooze with Spring Yellowish Green highlights. It’s an eerie look that fits the set’s overall color scheme. 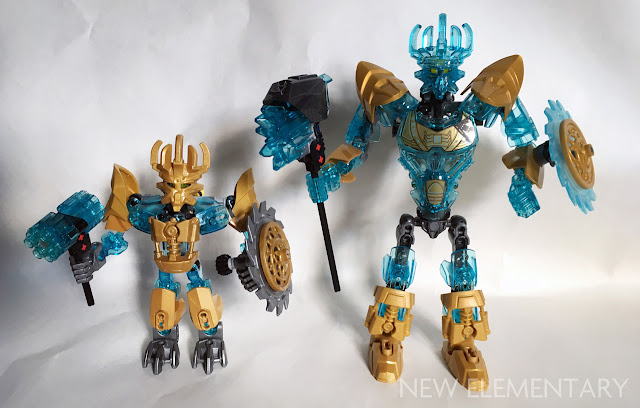 Once built, the new version of Ekimu is easily recognizable despite his increased size (30 modules/9⅜ inches/24 centimeters in height). He may not use a whole lot of new pieces, but the amount of parts and colors shared with his previous form works to his advantage by creating a sense of continuity between his previous and current forms. The increased amount of Tr. Light Blue, especially on his torso and mask, gives him a sort of “spirit” look. I’m reminded a bit of Korra’s spirit form from The Legend of Korra Book Two’s finale — or, on a more obscure note, the time Nick Bluetooth glinched into pure energy to defeat Gorm in the Galidor: Defenders of the Outer Dimension series finale. 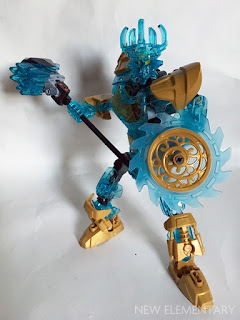 Just as last year’s Ekimu had greater torso functionality than the Protectors his design so closely resembled, this year’s Ekimu likewise has greater torso functionality than the Toa. Not only does he have a gear to control the rotation of his waist, but also a gear to control the rotation of his right shoulder, meaning he can swing his hammer either horizontally or vertically. Like Onua Master of Earth, Ekimu uses a ball joint and ball cup so his right arm has enough friction to support the weight of his hammer. It’s an elegant way of combining last year’s signature gear function with this year’s. 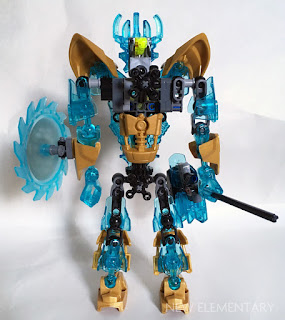 At the same time, Ekimu’s hammer no longer has a shooting function, and his shield (now mounted to his arm by a friction pin rather than a cross axle) no longer spins freely, so some functionality has also been lost in this transformation. Ekimu lacks a Unity Piece on his back, so cannot unite with the Great Elemental Creatures as the Toa could, but this probably would not have been possible anyhow due to the Mask of Creation’s crown-shaped forehead. And on the plus side, this also means that he is able to use last year’s style of eyestalk, which features a larger mask pop-off trigger to facilitate combat play. 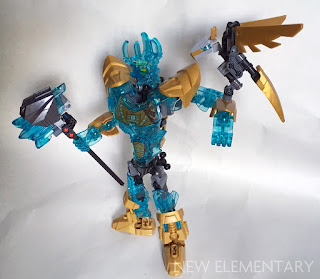 Although Ekimu cannot combine with the Elemental Creature sets the way the Toa can, he does have a creature of his own: Agil, the Creature of Light. Agil is exclusively available with the second issue of the LEGO Bionicle magazine published in Europe, but contains no exclusive parts, so enterprising LEGO fans in countries where the magazine is not available can potentially build him using parts from their collections. Agil’s “feet” are designed so he can perch on Ekimu’s left arm in place of his shield. 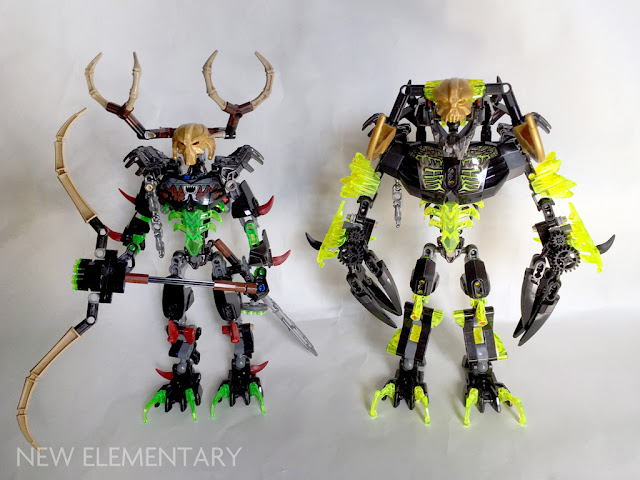 Umarak the Destroyer shares some obvious design cues with Umarak the Hunter, such as his Technic-based lower leg construction, Shadow Trap shoulder armor, and skeletal torso shell. However, where Umarak the Hunter had a limber physique, upright posture, and humanoid proportions, Umarak the Destroyer is a hulking brute, standing 33 modules/10¼ inches/26.4 centimeters tall and armed with huge, animalistic-looking claws. Just as last year’s Skull Spiders and Skull Warriors were reminiscent of the Skulltulas and Stalfos of The Legend of Zelda, so is Umarak’s transformation from scheming Hunter to colossal Destroyer reminiscent of the wicked Ganondorf’s transformation into the monstrous Ganon. The power of the Mask of Control has corrupted Umarak, or perhaps transformed him into a better reflection of the darkness in his heart. 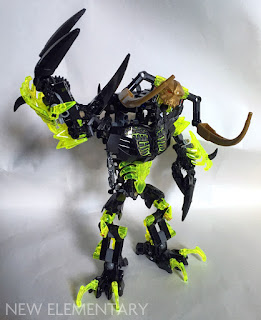 Needless to say, the massive, muscular neck of Umarak’s Destroyer form no longer allows him to unite with the Elemental Creatures. While he no longer carries weapons like his Hunter form’s shooting crossbow or sword, his new claws both look fearsome and introduce new functionality: Technic gears allow the fingers and thumbs to open and close in unison. And naturally, he retains his waist rotation function, allowing him to slash at his enemies. The Mask of Control can be knocked free either by bashing the trigger on the back of his head or delivering an uppercut straight to his jaw. The new Umarak does not include spare parts to turn his shoulder pads and toes into a complete Shadow Trap, but if you bought the previous version of Umarak, the click hinges, half-pins, and eye bulb included loose with that set work just as well with this one. 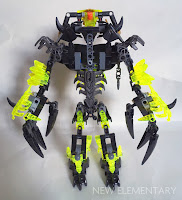 Umarak the Destroyer does have some weaknesses, of course. His ankle movement is much more limited than that of his Hunter form, perhaps to accommodate for his increased weight. His huge torso also has some conspicuous gaps, particularly between his neck and chest plate. If he’d been upgraded to, say, a $30 set instead of a $25 set, it’s possible some of these faults could have been addressed more effectively. 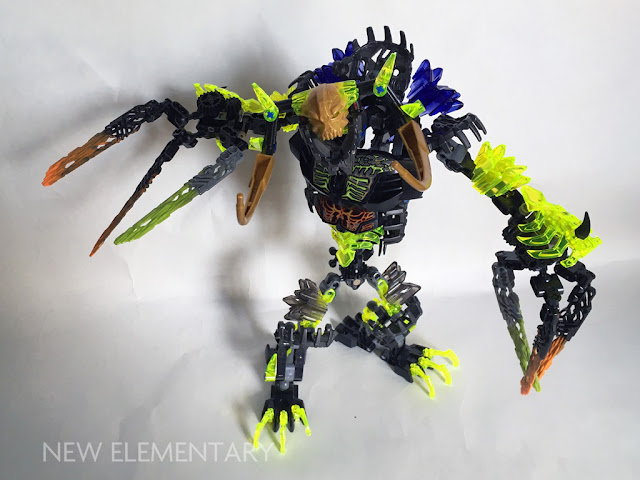 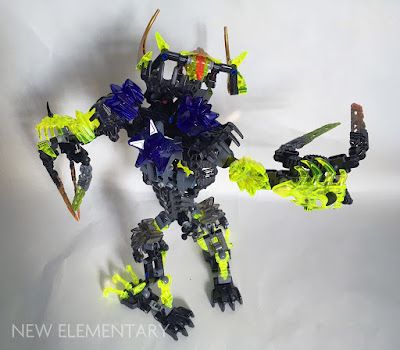 If you wish to make Umarak even more fearsome, LEGO has released instructions to combine Umarak with the three Elemental Beast sets to create an even larger and more monstrous form, standing about 40 modules/12.5 inches/32 centimeters tall. Umarak’s heels and torso are lengthened considerably in this combined form, though his legs remain close to the same size. Quake Beast and Lava Beast’s crystal shells are added to his shoulders, back, and thighs, their crystal blades to his gargantuan claws, Lava Beast’s chest plate to his diaphragm, and all three beasts’ Shadow Traps to his neck, knees, and sides.

The added colors of these parts give Umarak a chaotic look, but they are concentrated well enough on specific parts of his body that it doesn’t feel sloppy or random. What’s more, the added armor really helps fill out the gaps that detracted from the Destroyer’s standard design. If “Ultimate Umarak” has one weakness, it’s that the friction pins used for the claw function have difficulty supporting the increased weight of the claws. But plenty of exciting action poses are still possible.

Overall, I’m quite sad that these will be the final sets for this generation of Bionicle. Their design quality and playability are both incredibly strong, and if Bionicle were continuing into 2017 I’d have said they bode very well for the theme’s future. As it stands, although various people at the LEGO Group have provided assurances that the “constraction” (buildable action figure) category of sets and the Character and Creature Building System will continue into the future, it’s hard to know how many of the strong design cues from these sets will have a place in whatever form future constraction sets might take. 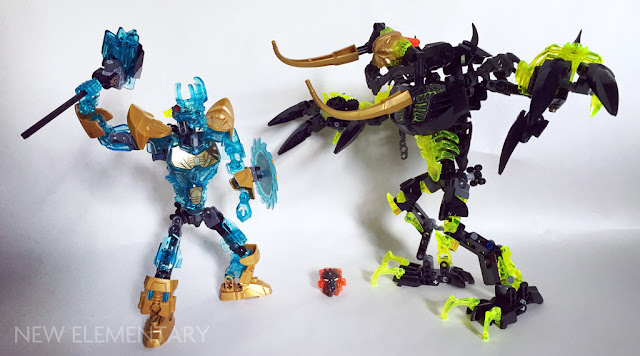 I would highly recommend these sets to other Bionicle fans, particularly since with Bionicle ending, there’s no telling when we’ll see sets and parts like this again. Thanks to the LEGO Group for providing these sets to review, and to the Bionicle design team for putting so much effort into making Bionicle’s second generation the best it could be!


READ MORE: We interview the team behind LEGO® BIONICLE® to discuss Constraction, CCBS and more

This is an opportune moment for me to thank Scott and Andrew Barnick for their fantastic, thorough Bionicle reviews over the last two years! It's been great to have Bionicle experts on board, revealing what makes these sets so great.