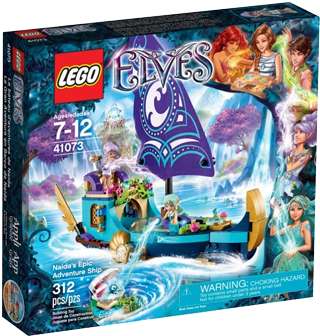 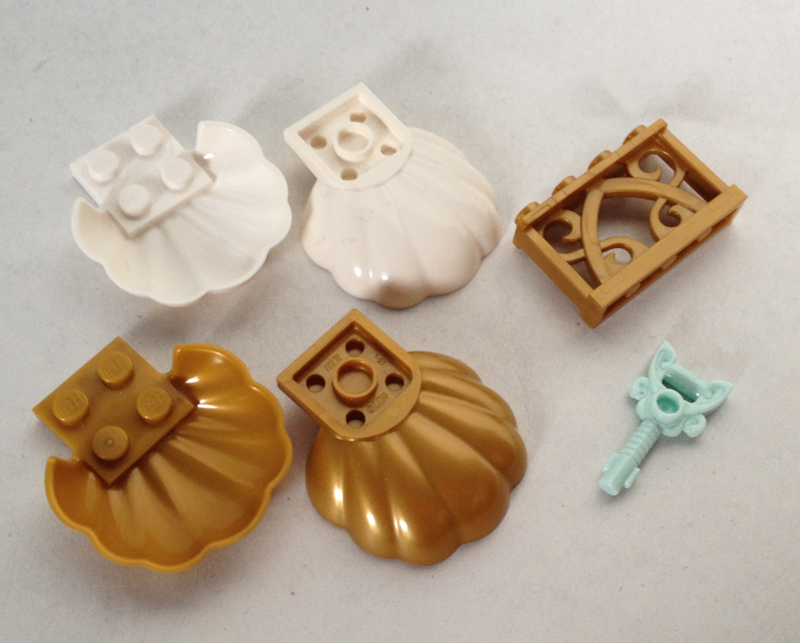 First and foremost, we have a brand-new element for the Elves theme: an ornate new 1x4x2 railing in Warm Gold [TLG]/Pearl Gold [BL] (Design ID 19121 | Element ID 6097234). This part also appears in two other Elves sets in Warm Gold and Sand Green. Another new element for this year is the 4x4½ clam shell (Design ID 18970). This piece appears exclusively in this set and 41063 Ariel’s Undersea Palace

In Aqua [TLG]/Light Aqua [BL], we have an exclusive new accessory: the magical water key (Design ID 19118 | Element ID 6097247). Andrew discussed this new key element in his review of 41076 Farran and the Crystal Hollow. It has a lot of potential for both decorative and functional applications. Currently, it comes in three colors in one set each: the summer wave will bring both a fourth color and a set that includes all four keys. 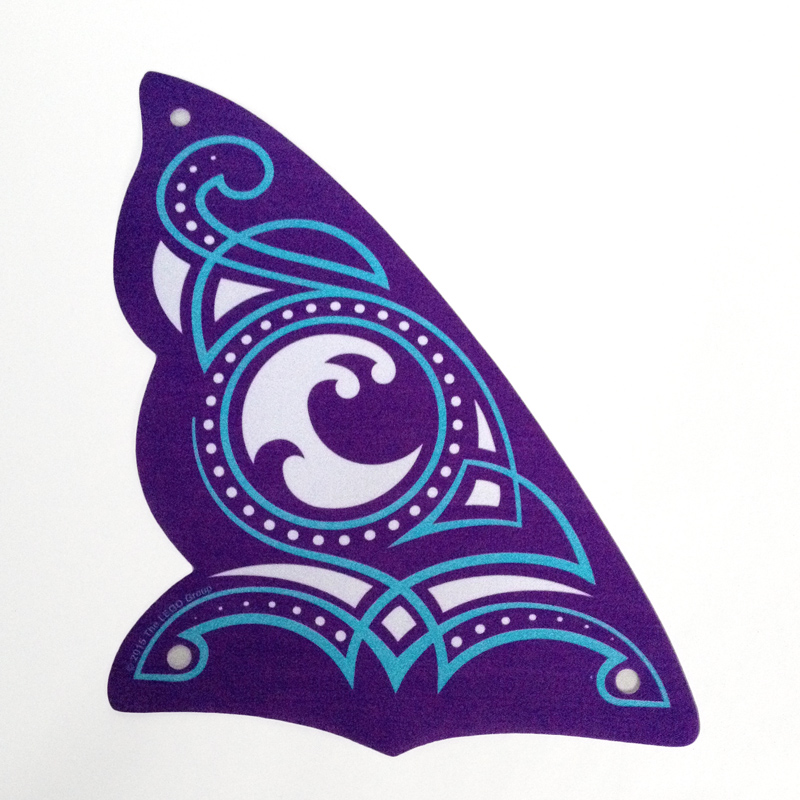 This ship wouldn’t be complete without a sail! The sail (Design ID 19250 | Element ID 6097438) is a unique shape and is bagged individually with a backing card to prevent wrinkling. It is made from White cloth printed with Medium Lilac [TLG]/Dark Purple [BL] and Medium Azur [TLG]/Medium Azure [BL] patterns on one side. I have to agree with many critics that the sail would have been nicer had it been printed on both sides, or even just Medium Lilac on the reverse side. However, the final set still looks fantastic even with just one side of the sail colored. 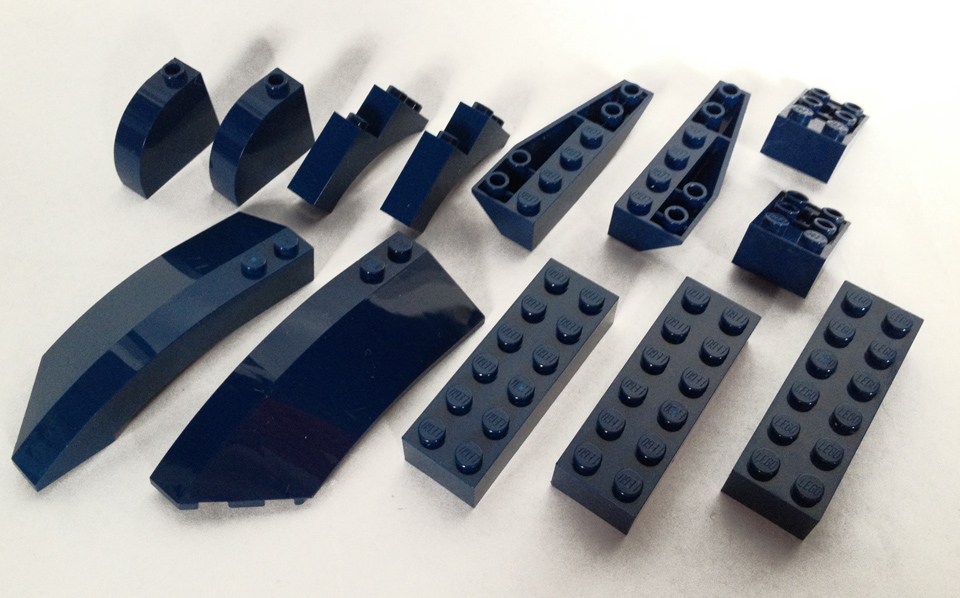 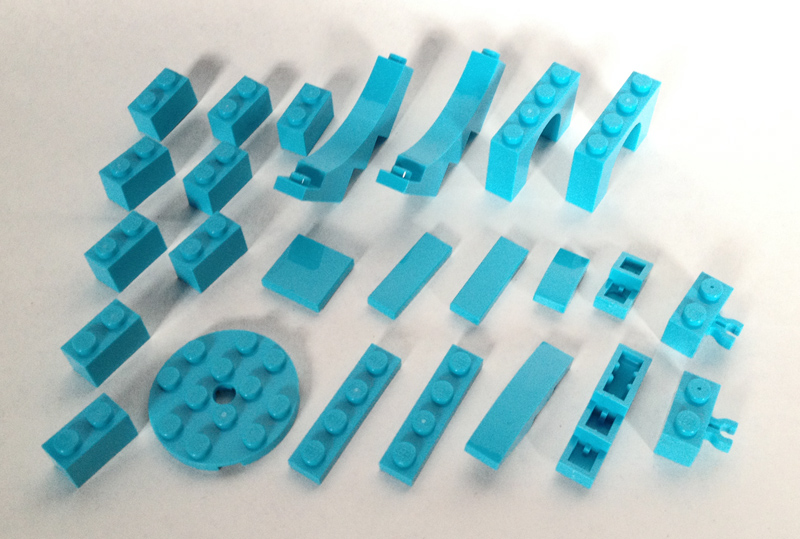 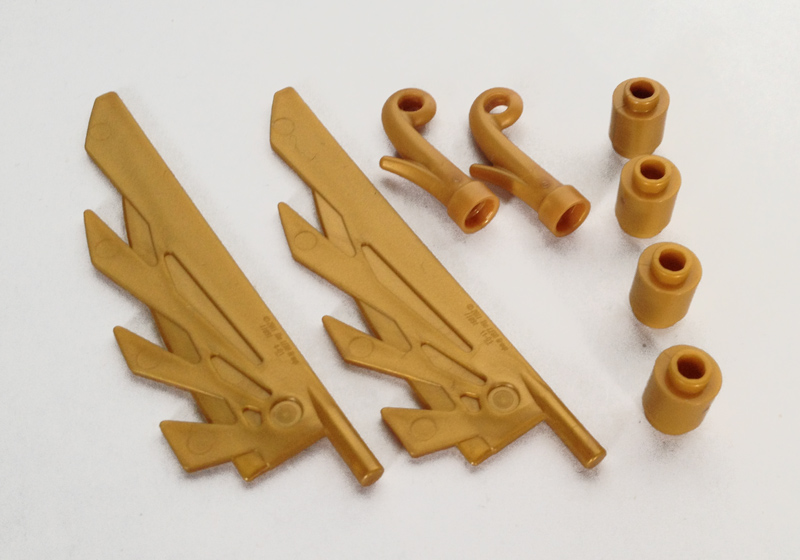 The set has a nice helping of new or rare Warm Gold parts as well. For instance, this set has two Warm Gold reeds (Design ID 15279 | Element ID 6097518). This recolor currently appears only in this set and 41075 The Elves’ Treetop Hideaway

. The four Warm Gold 1x1 round bricks (Design ID 3062 | Element ID 6060800) are not entirely new but have only previously appeared in two Disney Princess sets. This year they appear in this set and 70413 The Brick Bounty 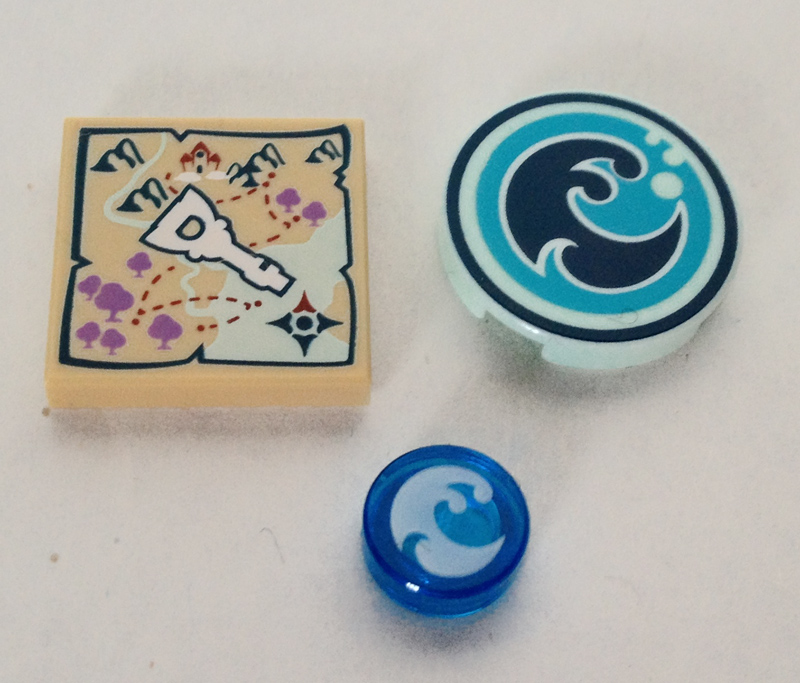 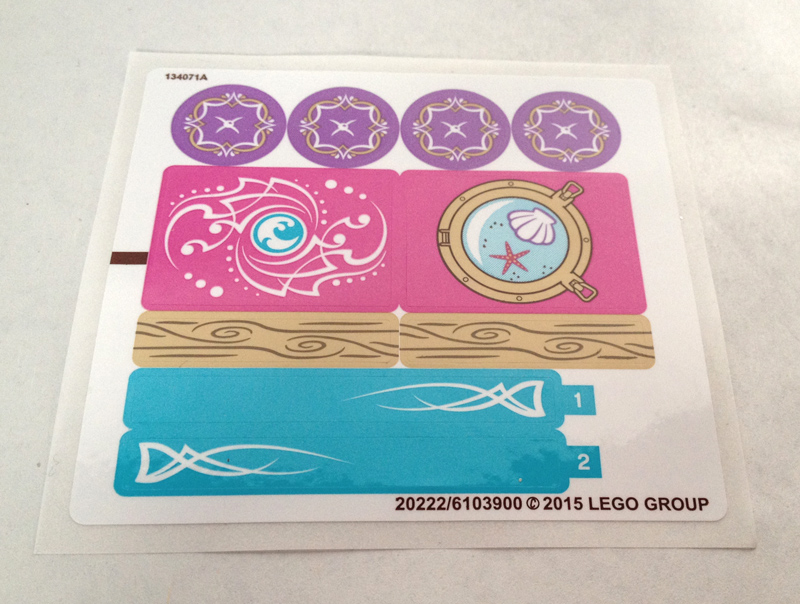 For additional decoration, a sticker sheet with ten stickers is included. All the stickers are fairly easy to line up —all but the cushions have straight edges, and those have directional points that help in lining them up. Only two stickers (the two Medium Azur stickers for the ship’s hull) are applied to rare pieces. However, these two stickers add a lot to the design, as you will see in the photos below. 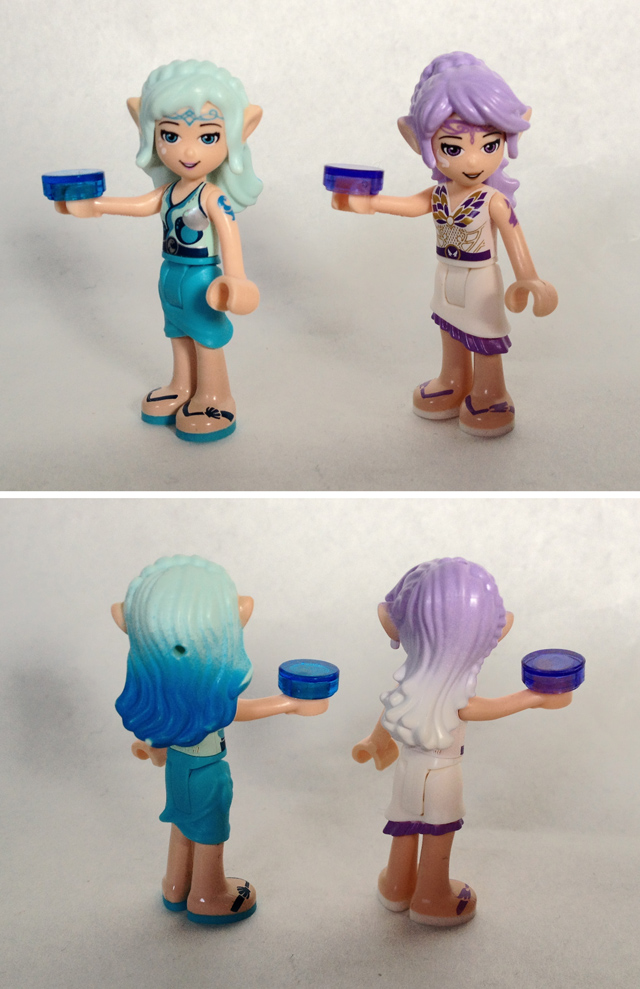 The mini-dolls, Naida Riverheart and Aira Windwhistler, have lots of beautiful detail. Both characters have beautiful body art on their left shoulder, right cheek, and forehead, and wear a belt or sash with their elemental icon in the center. Each girl has a new and unique rubber wig with molded “elf ears” painted to match her Light Nougat [TLG]/Light Flesh [BL] skin tone. Even more impressively, each character’s wig has colored highlights: Aira’s (Design ID 20010 | Element ID 6103003) fades from Lavender to White, and Naida’s (Design ID 20060| Element ID 6103116) fades from Aqua to Dark Azur [TLG]/Dark Azure [BL]. Every new wig in the Elves theme features a Ø1.5mm hole for accessories like those found in the LEGO Friends theme.

People are often surprised to hear that there are actually four mini-doll torso styles: “girl”, “boy”, “woman”, and “man”. The differences are mostly in the shape of the chest, although the rarely used “man” style has thicker arms as well. Naida and Aira both use the “girl” torso style, which is by far the most common. Their torsos are decorated with metallic silver and metallic gold accents, respectively. Naida’s skirt has previously been used in various LEGO Friends sets, but Aira’s is a brand-new design with a beautiful diagonally cut hem. Further reinforcing their elemental motifs, Naida’s sandals feature a seashell pattern, and Aira’s feature a wing pattern. And finally, each character carries a 1x1 round tile. Naida’s is Tr. Blue to represent her water magic and Aira’s is the much rarer Tr. Bright Bluish Violet [TLG]/Trans-Purple [BL] (Design ID 98138 | Element ID 6065505) to represent her wind magic. 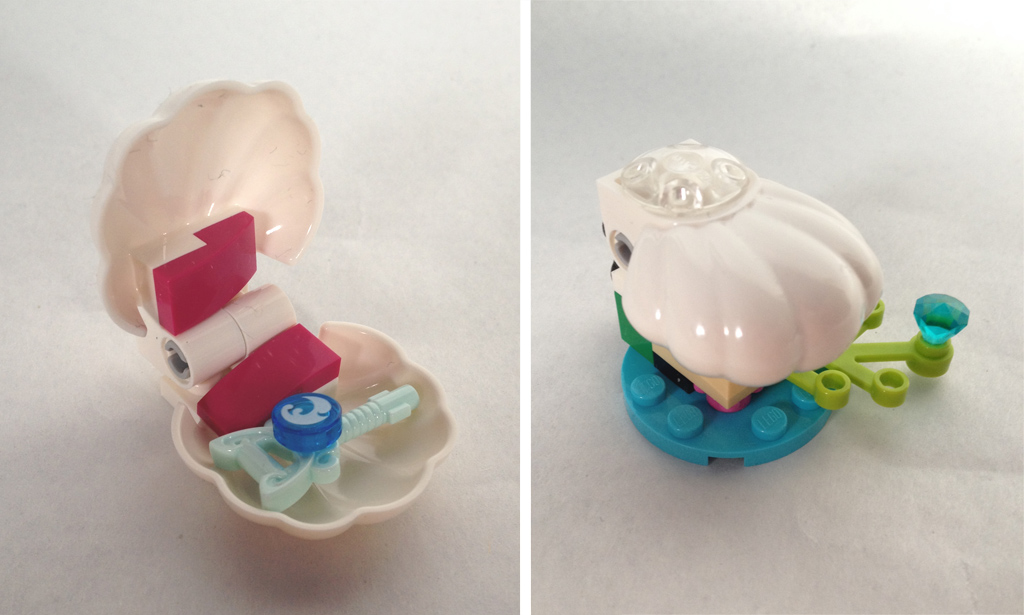 The first bag builds Naida, the giant clam and the base of the ship. The giant clam is a simple but clever design that hinges open with a Technic pin. A black rubber 2M Technic damper ensures that the clam will snap closed, though not so hard that it will pinch small children’s fingers. The clam is the hiding place for the water key that Naida has to collect in order to open the magical portal so her new human friend Emily Jones can return to her own world.

The hull of the ship features a sticker representing a downward-facing porthole. Through the porthole you can see a starfish as well as an oyster — possibly the same oyster Naida is looking for! The clamshells on the sides of the ship function as seats, and are attached via ball cups so that they can fold to the sides. There are also two more seat cushions and a diving board on the sun deck at the stern of the ship.

As this section of the hull comes together, it’s already apparent just how solid and streamlined its design is, and it only gets better as the build continues. Even the underside of the ship looks beautiful!

Bag two builds Aira, completes the hull, and builds the ship’s cabin/galley. The ship’s elegant curved prow comes together in this section, using some clever SNOT building to lock it in place and a combination of bricks and stickers to add a horizontal Medium Azur stripe. Also in this bag, the gearbox for steering the ship is constructed. That’s right, this ship has a gear function! 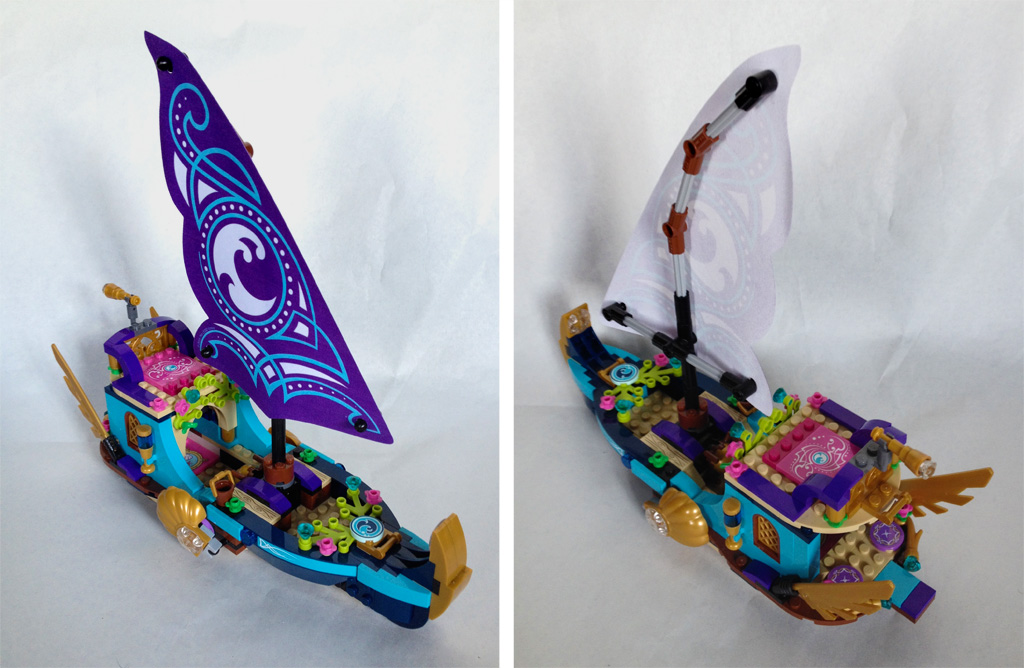 Bag three adds the quarterdeck, the mast and sail, and lots of decorations. First comes the quarterdeck, which features a decorative railing using Medium Lilac bows and the new fence piece. On top of this railing is a large spyglass constructed from the basic spyglass element, a Warm Gold fez, and a Transparent [TLG]/Trans-Clear [BL] gemstone as the lens. For further decoration, the quarterdeck uses a sticker with abstract patterns and the water elemental icon.

The ship’s decorations include climbing plants on the deck and the archway leading into the cabin, which like most of the plants of Elvendale grow both flowers and gemstones. The Legends of Chima wing elements and two blue lanterns are added to the sides of the cabin, and the Warm Gold reeds with attached Tr. Light Blue gemstones are attached to the sun deck (I’m not sure of their significance, though I assume they are a low railing).

The ship’s mast is constructed from basic Technic axles and angle connectors, making it very sturdy. The sail makes a nice billowy sound as the mast rotates. The rotation of the mast is controlled by the ship’s wheel via the aforementioned gearbox.

When the ship is completed, there is plenty of space for all five main characters on board. As the ship’s captain, Naida can helm the wheel as Aira uses her wind powers to propel the ship forward. Meanwhile, Farran can cook up a meal in the galley, Azari can keep lookout from the quarterdeck, and Emily can help navigate using the magical map. The interior of the cabin is very simple, with just a small stove and skillet on the starboard side and a hairbrush and mysterious purple jar on the port side. You’d be hard-pressed to fit more than one character in the cabin at any one time, but the windows help it to feel more spacious. 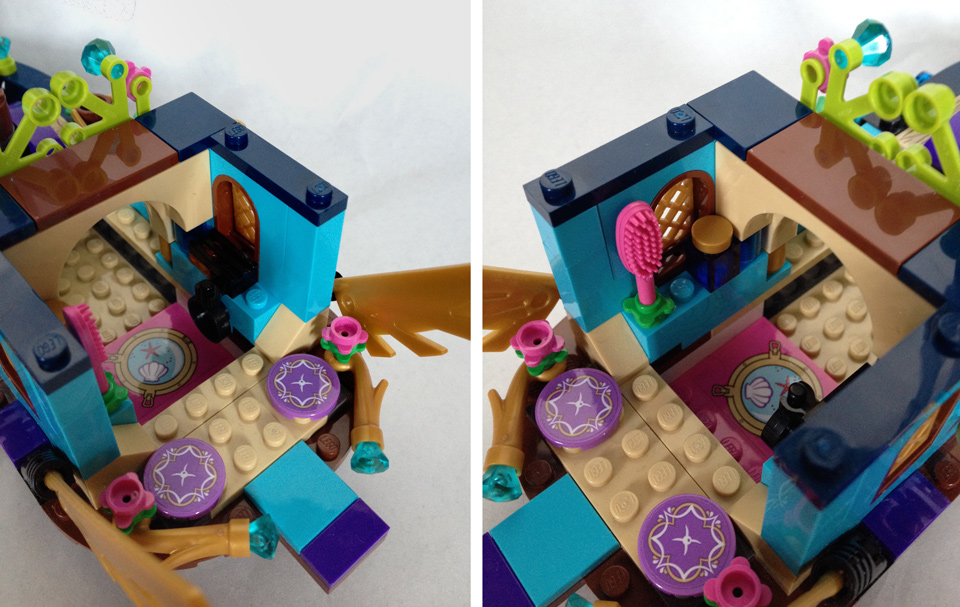 One drawback of the set is that it lacks any cute animal friends — the only animal in this set is the giant clam, which is hardly as cuddly-looking as the animals from the other Elves sets. By contrast, buying 41071 Aira’s Creative Workshop

, which add up to more or less the same price, will get you the same two mini-dolls as well as two animal friends — Pluma the bird and Delphia the dolphin. On the other hand, neither of those sets will get you the magical water key.

Another thing the ship lacks is dedicated sleeping quarters. Naida is officially stated to live on board, and sleeping quarters are shown in the “Unite the Magic” TV special. But that is inevitable in a set this size, and even as a $30/€30/£25 set it still manages to seem a lot more livable than the Destiny’s Bounty from Ninjago (either the original, which cost $80/€80/£60, or this year’s, which will be even more expensive). 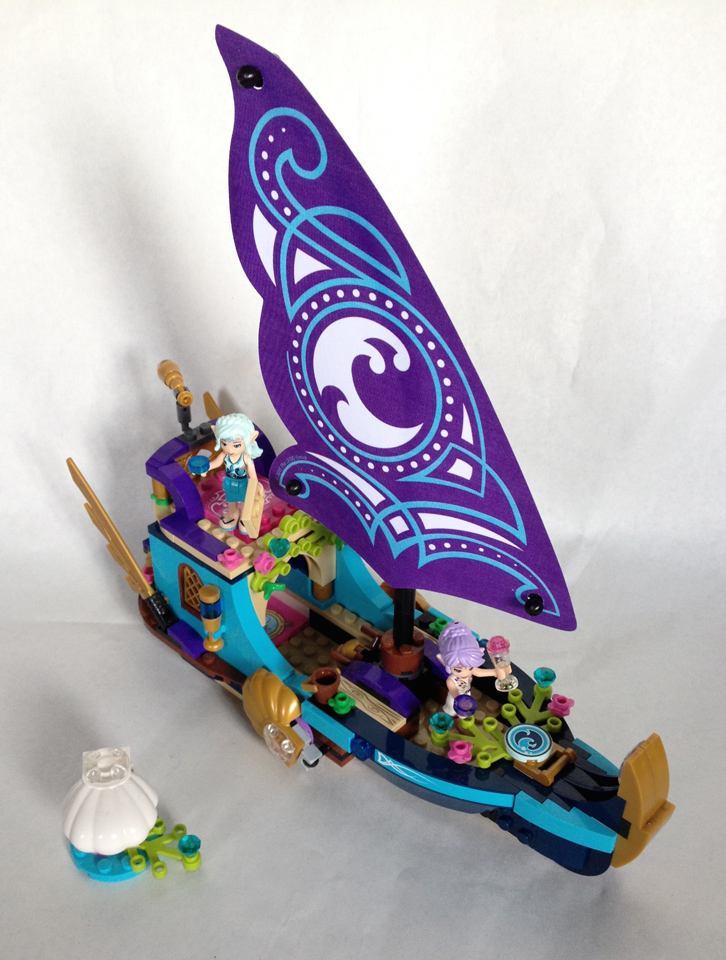 Overall, this set really showcases this theme’s defining values: non-violent fantasy adventure, otherworldly design sensibilities, and a balance between the creature comforts of civilization and harmony with the environment. It might very easily be the best playset of this theme’s debut wave! I would recommend it to anyone who has an interest in this theme, or even just a taste for fantasy adventure on the high seas!