Today Tom Loftus (Inthert on Flickr) completes our LEGO® Trolls World Tour coverage – that we began back in April 2020! – with a review of the parts in 41258 Vibe City Concert. If you're buying this set from USA Amazon, consider using our affiliate links - New Elementary may get a commission. The products in this article were provided for free by LEGO; the author's opinions are not biased by this. 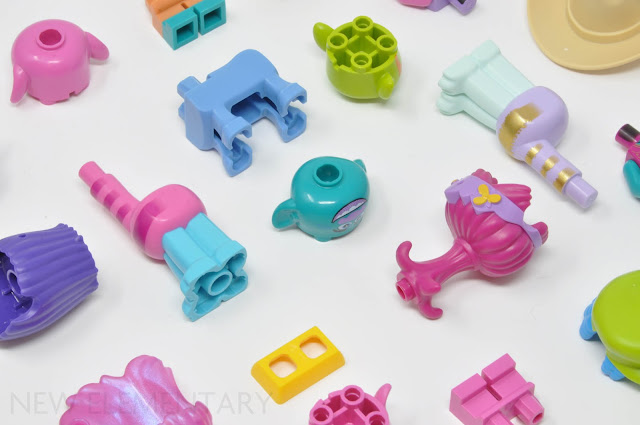 The explosion of colour that is the LEGO® Trolls World Tour theme concludes with its final encore: 41258 Vibe City Concert. With 494 pieces, five weird and wonderful minifigures and an original retail price of US$59.99 / £54.99 / 58.48€ it is the largest set to come from this theme. 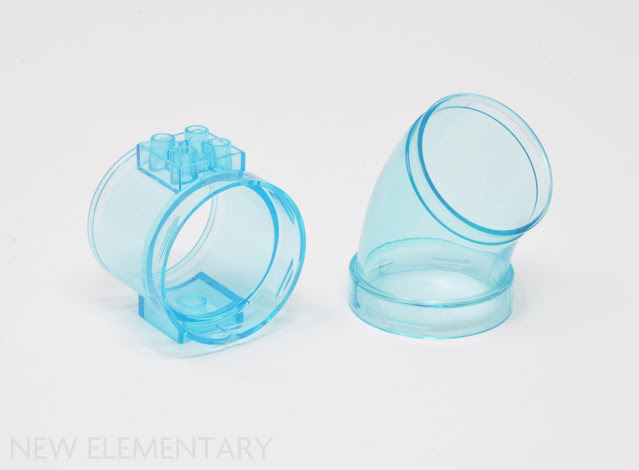 Taking centre stage on the 'new moulds' front are the delightful waterside elements in Transparent Light Blue/ Trans-Light Blue, both of which were new for 2020:

Sadly only one of each is included in the set, which is a shame given how enjoyable this new family of parts is to play around with. We’ve already taken a closer look at them in our review of 41430 Summer Fun Water Park – the only other 2020 set in which these new elements appear, but 2021 brings Friends 41691 Doggy Day Care which includes a miserly single straight tube, for said doggies to run through. 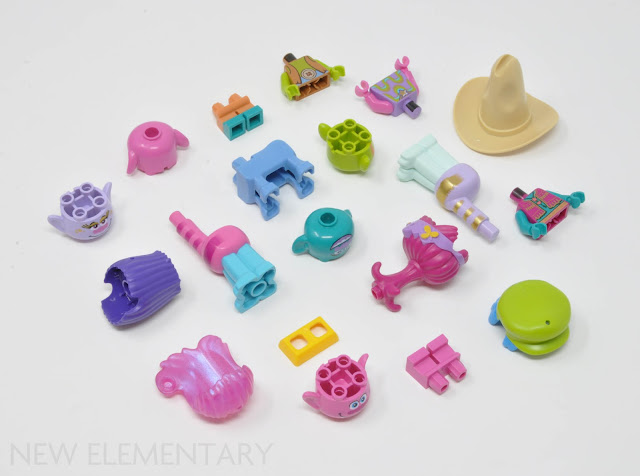 Just one glance at the disassembled minifigures will tell you a multitude of new elements were created to best capture the appearance of each character. To cover each and every one would be impractical but there are two that I feel deserve a closer look. Both of these also appear in 41253 Lonesome Flats Raft Adventure. 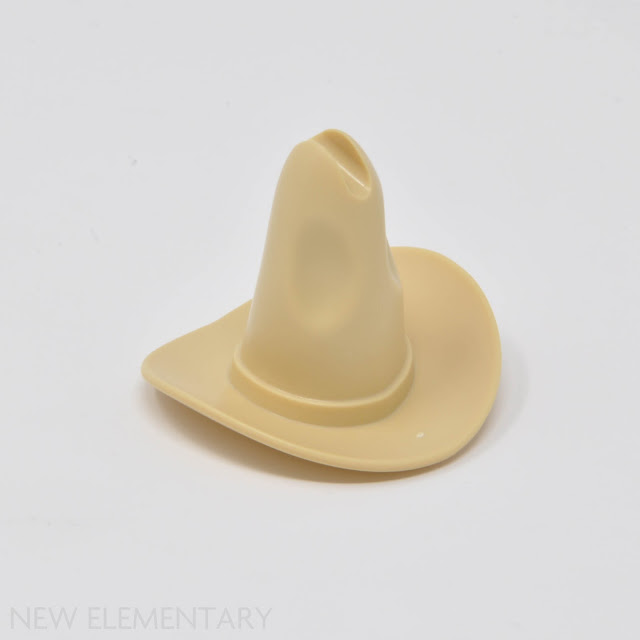 Firstly, Minifig Hat Stetson Oversized in Brick Yellow/ Tan (6286471 | 65465) which all but dwarfs regular minifigures - to hilarious effect I might add. 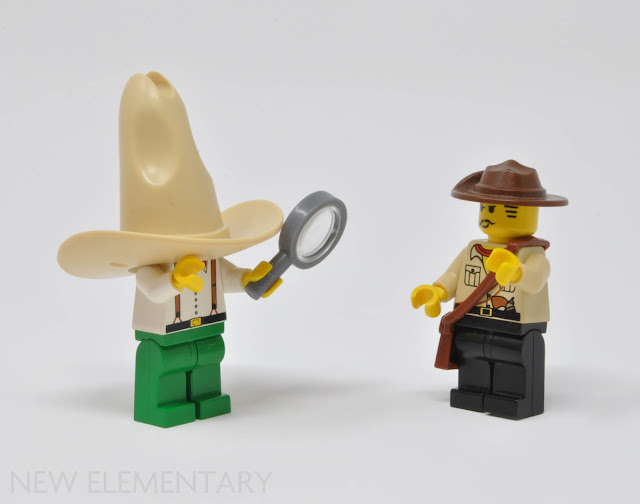 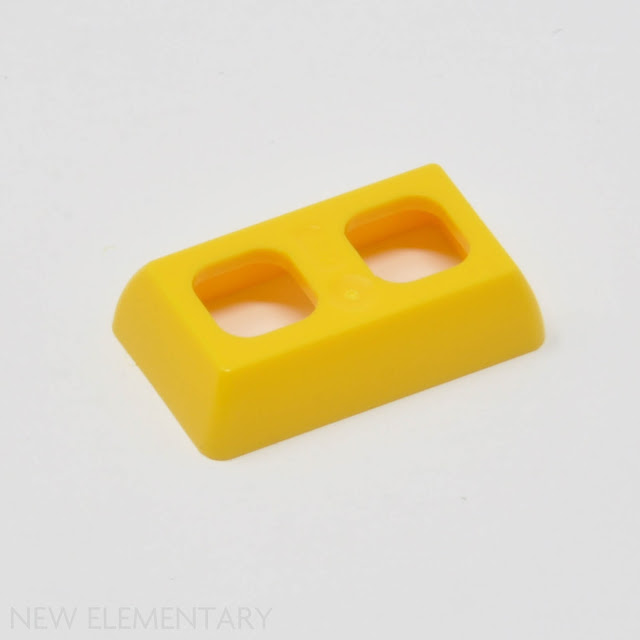 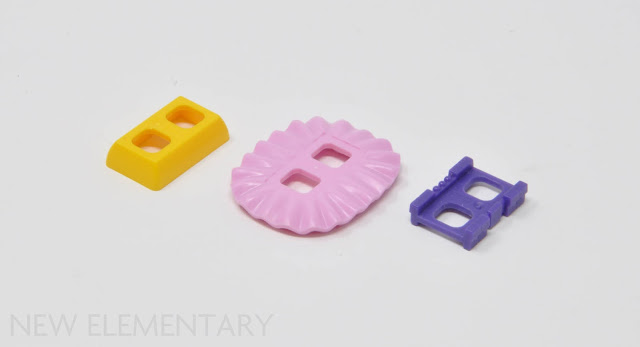 Style-wise, it fits right in with the existing family of minifigure hip wear elements such as the tutu (24087) and utility belt (27145). I feel it’s one of the only minifigure elements introduced for the Trolls World Tour line that we might see reused in other themes. 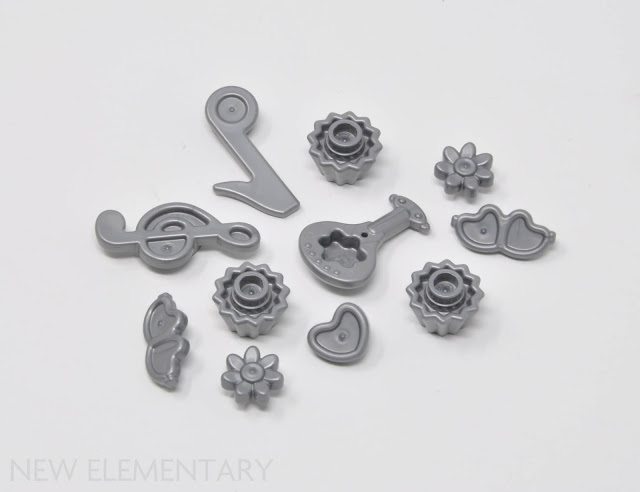 Stretching the term ‘new’ even further, this small bag of musical decorations, Mini Accessory No. 14 in Cool Silver Drum Lacquered/ Metallic Silver (6292984 | 65468), is commonplace in many of the Trolls World Tour sets but was nevertheless new for 2020. It’s also worth noting that this is only the second time it appears in this colour.

Some the most unusual elements I’ve come across in a while are these Felt Flowers 6 x 6 with Square Hole in Flame Yellowish Orange/ Bright Light Orange (6290405 | 66830). This particular shade was also included in 41221 Poppy’s Pod. The two flowers come safe and sound in a pod of their own - yet another cardboard box for me to find a use for!

Fans of Bright Bluish Green/ Dark Turquoise, more commonly known simply as teal, will enjoy this first selection of 2020 recolours – two of which are unique to this set, and the next two each appeared in one other set: 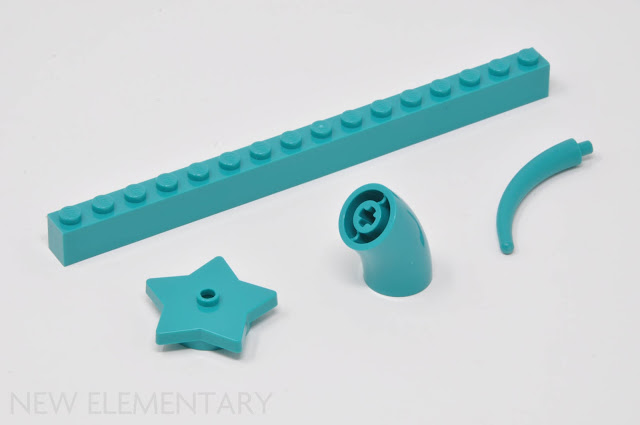 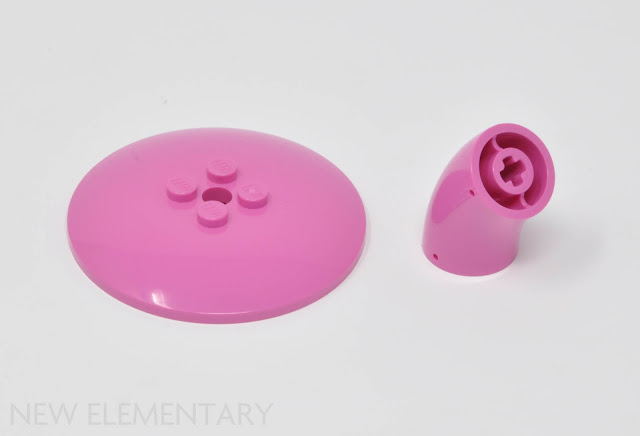 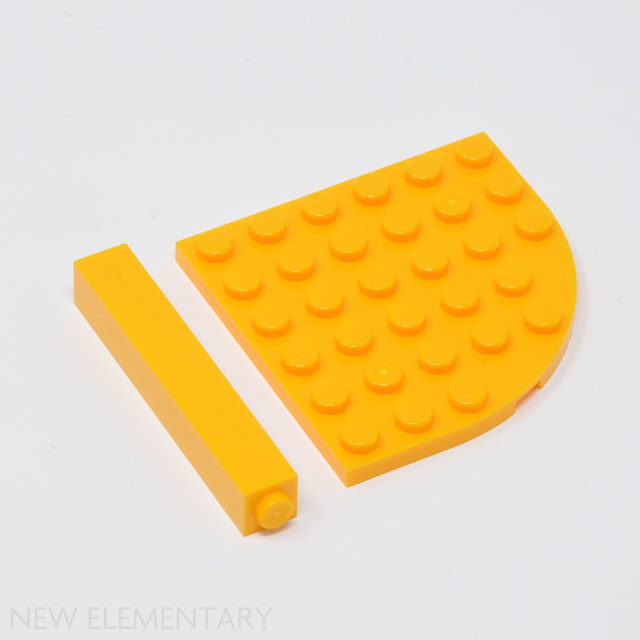 Next, not the most exciting unique recolour to me but unique nonetheless: 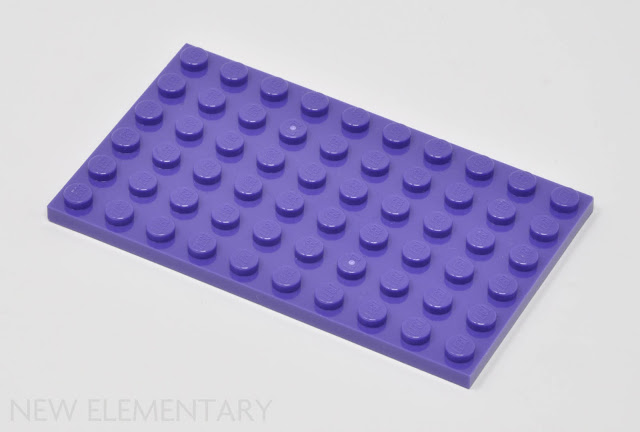 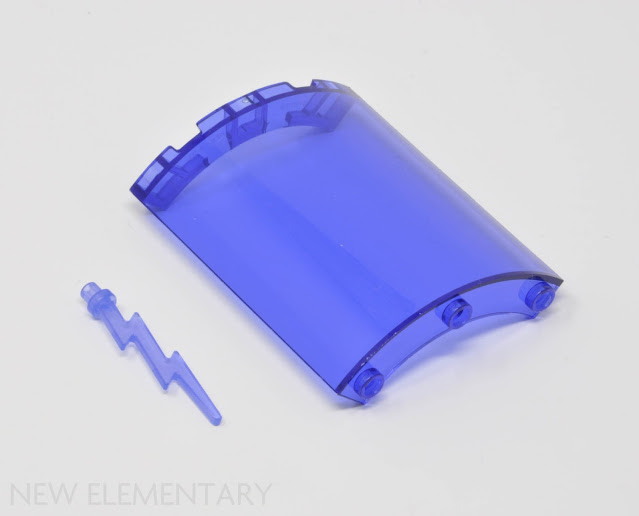 And while we’re in the realm of the non-opaque, Transparent Medium Reddish Violet/ Trans-Dark Pink: 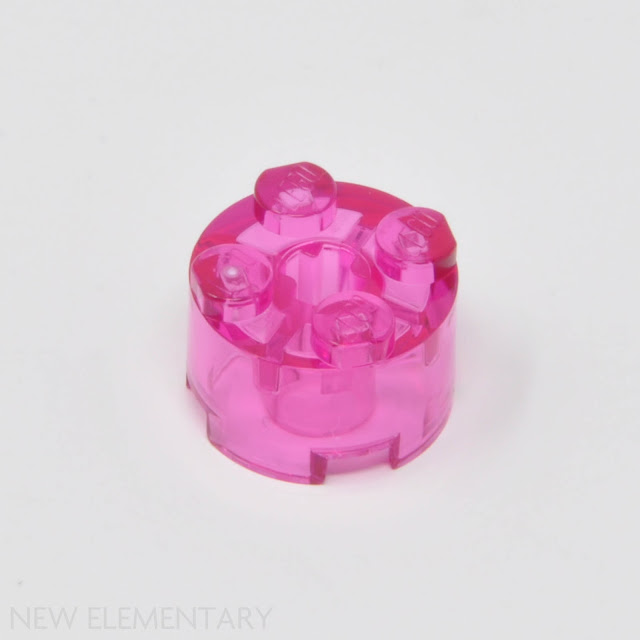 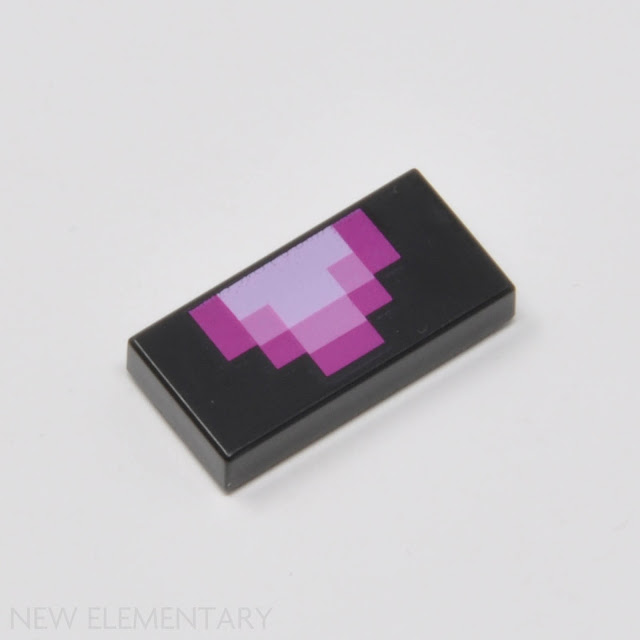 Given the substantial sticker sheet, I wasn’t expecting to find any notable prints. Yet here we have Tile 1 x 2 with Purple, Bright Pink Squares in Black (6252644 | 47130); a cleverly repurposed 1x2 tile from the LEGO Minecraft set 21151 The End Battle from 2019. It’s great to see a seemingly theme-specific print get shared.

While not new by any means, these Medium Lavender elements warrant a mention nonetheless: 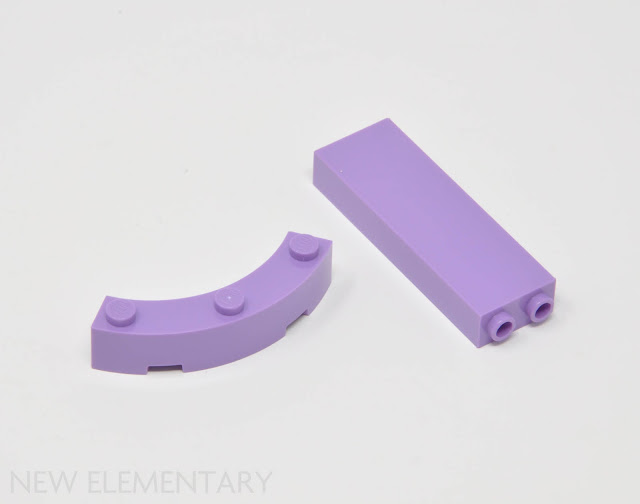 There isn’t much in the way of remarkable building techniques to discuss, mostly straightforward brick-stacking with the occasional SNOT technique. So instead, we’ll jump straight to the completed model – and boy was my use of the word ‘bonkers’ premature. 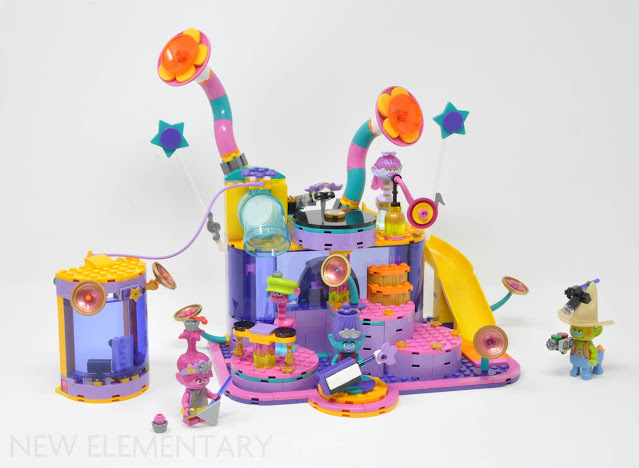 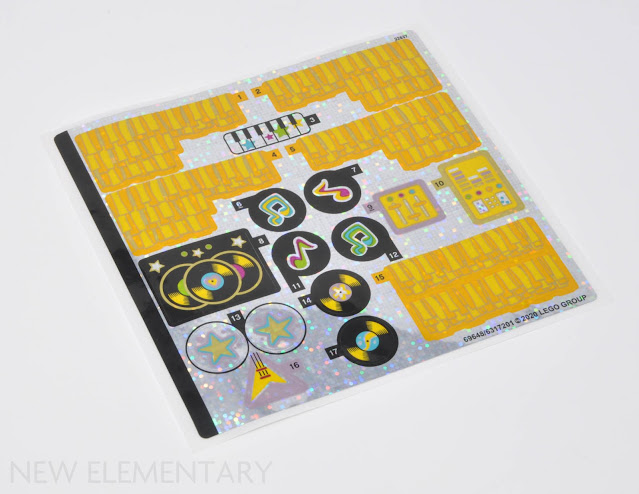 And that’s even without the glittery stickers which I feel should only be applied by those brave enough to gaze upon mesmerising sparkles for evermore. I opted to leave them off lest I be transfixed by the many forbidden dimensions they seem to hold the keys to.

The minifigure selection is quite generous; we get most of the main characters in one fell swoop. The presence of Cooper (fare right) in particular makes sense as I’m given to understand its upon arrival at Vibe City that he finds out he’s actually a Funk Troll of royal descent – at least according to a plot summary I read.

Despite the build’s overall ... erm... acquired taste, there are some well-thought-out design choices I appreciated while assembling this lurid venue: 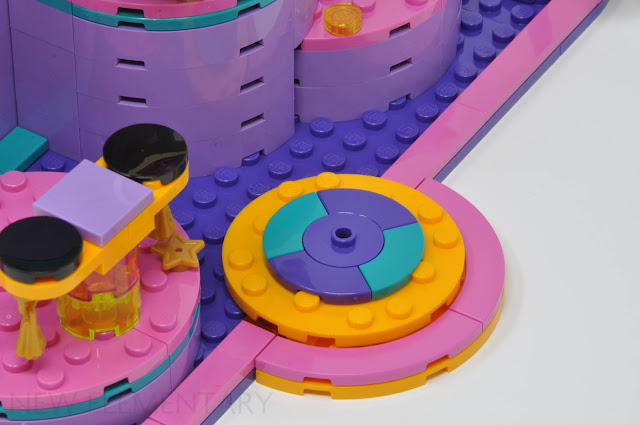 A tiled Bright Purple/ Dark Pink border encircles the front of the stage, neatly skipping around the foremost revolving zone and goes a long way towards grounding the scene.

The variety of poseable flower-shaped speakers dotted about certainly amplify the good vibes of this city. I especially like the look of the largest two that are built up using those snazzy new curved tube elements (65473). Sadly, despite their flexible appearance, the movement of each speaker is limited to a Mixel ball joint at the base since the tube elements are connected with axles. 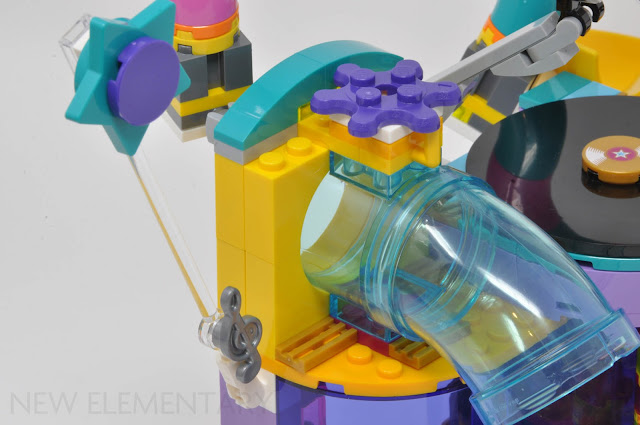 At the top left corner of the stage there is a small slide that I’ve only just realised is meant to resemble a tap, with the 2x2 purple splat gear (35442) representing the knob. You’ll notice the straight water slide section (49736) is beautifully integrated with the surrounding arch elements. Perhaps this combination of parts is mandatory whenever the waterslide elements feature, because they can also be seen on the Friends 41430 Summer Fun Water Park too! 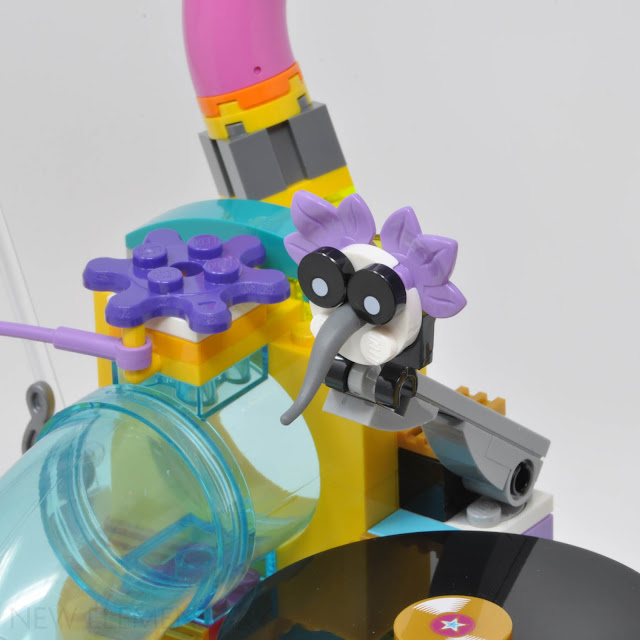 Next to the slide is a record needle creature I found too hysterical not to mention. 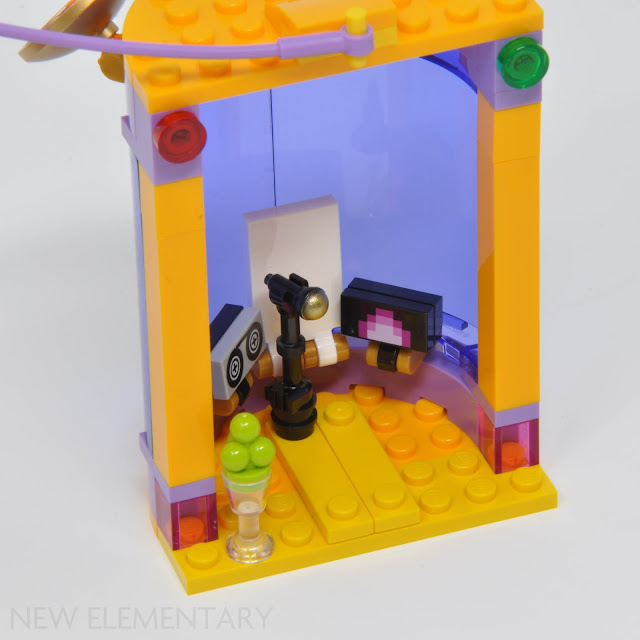 Quite literally tacked onto the main build is this soundbooth. The interior is nicely decked out with various recording equipment, making good use of that Minecraft tile (6252644) plus a tasty-looking refreshment off to the side. I feel the booth looks a tad bland for its size, particularly compared to the detail-laden stage. Though in fairness, proportions are hardly a matter of concern when discussing the world of Trolls! 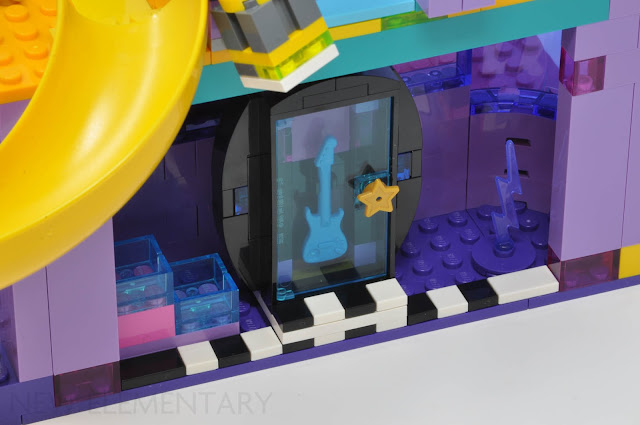 Backstage there is a small area with a couple of containers to store loose accessories, a display case and a spot for the transparent purple lightning accessory (6294681 | 27256). The lattermost I assume represents the Funk string, one of six magical guitar strings that powers each Troll tribe’s specific music. Trolls lore is a rollercoaster to read through, let me tell you. 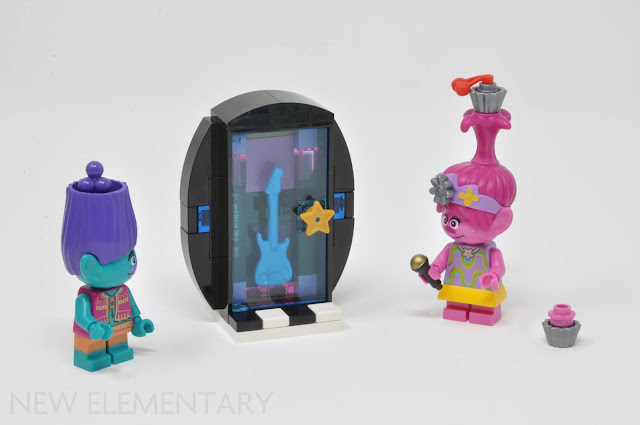 I was unable to find the significance of the dark azure guitar, which surprised me given the care that clearly went into the design of its removable display case.

If minifigures that stretch the term ‘mini’ and soundstages amped up with play features clad in psychedelic stickers are your thing this set will not disappoint. But for us mere mortals that don’t appreciate all of those things at once, this set does offer a wide range of new elements and recolours – both of which are sure to spark some colourful build ideas for the MOC-mined folk among us.

However, if you’re neither a Trolls fan nor a builder, I can’t imagine this set will provide much beyond what’s evident from the images. This really is a case of what you see is what you get – at least in this case what you see is sparkly!

Do you enjoy building with parts like these? Be inspired by MOCs that New Elementary authors have created with Trolls sets: