First announced in 2019, it seems LEGO® Braille Bricks are now being made available. They are free, but will only be supplied to select institutions, schools and services who cater for the education of blind and visually impaired children in certain countries. It is intended that more countries will be included in the years to come but at time of writing the list only comprises Australia, Austria, Belgium, Brazil, Canada, Denmark, Finland, France, Germany, Ireland, Italy, the Netherlands, New Zealand, Norway, Portugal, Spain, Sweden, Switzerland, the UK and the USA.

If you think you might qualify to receive them, contact the official partner from the blind community that LEGO are working with in your country for information. These partners handle distribution of the toolkits as well as supporting training of the teaching concept. The partners are all listed on the official web page.
For example in the US the official partner is American Printing House, a nonprofit organisation providing resources for people who are blind and visually impaired. As some schools won’t be open as normal, the kits are being sent to the districts where blind or visually impaired students are registered so that teachers can send them to students’ homes.


What are LEGO Braille Bricks?

The classic 2x4 LEGO brick has been adapted, as The LEGO Foundation explain:


"The LEGO Braille Bricks concept is a play-based methodology that teaches braille to children who are blind or have a visual impairment... unlike a regular LEGO brick, the studs are arranged to correspond to numbers and letters in the Braille alphabet."

There aren't many existing materials for teaching Braille to young children. Those that do exist are often old-fashioned or unrefined – teachers told The LEGO Foundation that they resort to creating their own materials like taking a box of six eggs and moving eggs around to create the different permutations for each letter.

A LEGO Braille Bricks set comes in a plastic tub with cardboard insert, similar to LEGO Education products, and has a minimum of 300 of the various bricks. They did not include too many bricks in the set overall, as it becomes harder to locate letters. There are 63 possible patterns of brick, so 63 new moulds were struck for this project! (Strangely, the prototypes we saw all had the same Design ID, 57705. We don't know if that is also the case with the final product.)


Letter distribution within the set of course varies from region to region. The insert shows the alphabet and symbols in the local Braille. Common letters will be present in quantities of around 15 bricks, but even uncommon letters will have five bricks present because if there was only one provided and you lost that brick, the set may quickly become unusable.

The official website states that LEGO Braille Bricks come in the "five signature LEGO colours", but that is misleading. They are white, yellow, red, blue and green however the blue and green are not the 'classic' blue and green. The first prototypes did use those familiar hues but it was found that the contrast between the printing and the bricks was insufficient for people who are visually impaired (as opposed to being blind). Instead, they are going with Dark Azure for the blue and Bright Yellowish Green/ Lime for the green. A pink shade was also included in the user workshops but reactions were so polarised, they played it safe and decided against including it.


Different letters have different colours; this is random and simply to provide some visual interest for sighted users. The mathematical symbols are all white.

Teaching tools like LEGO Braille bricks have a distinct advantage over many other methods such as a Braille typewriter where, if a child makes a mistake, they cannot correct it. Being tangible objects that can be rearranged, these individual letter bricks open up creative possibilities for the children using them. Because they're LEGO bricks! 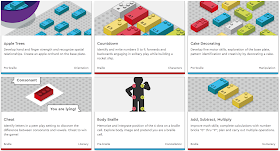 The new LEGO Braille Bricks website currently provides 90 printable and downloadable activities, organised in an understandable and useful fashion. The site has many useful tips for teachers, such as ways of sorting the bricks before the session because "finding the right brick from the box can take some time and might not be a useful part of the learning activity."

They're free, fun and educational for children who have a significant condition to deal with. However, a variety of criticisms have been levelled at these bricks even before their release. We've laid out the common questions and attempted to answer them based upon what we have been told by The LEGO Foundation as well as our wider experience of The LEGO Group.

Why are LEGO Braille Bricks not available in all countries?

This is no ordinary LEGO product and cannot be provided to every country in the exact same form because, just as languages and alphabets very from country to country, so does Braille. We met Stine Storm, New Ventures Manager at The LEGO Foundation, in May 2019 and she explained that by  that stage they had tested the set in workshops in Brazil, Denmark, Norway and the UK and had realised, because of regional differences, they would need to test the bricks more widely in many countries before releasing. Braille representations vary, especially when it comes to numbers and symbols. For example the sets come with bricks for the mathematical operators +, - and = but no × or ÷ symbols as the Braille for these two varies widely from country to country.

Why can't everybody have LEGO Braille bricks, if they're prepared to pay?

LEGO Braille Bricks will be provided for free by The LEGO Foundation to blind and visually impaired children but clearly there is public demand for them too. Adult LEGO fans want them for collectability and perhaps even the different building options that elements with 'reduced knobs' provide! Hopefully, no-one would be as greedy as to take these away from the children who need them, or heaven forbid, sell them on the secondary market.

So, might these sets be sold separately? No-one has given a clear "no" answer to this prospect as yet, but it seems very unlikely. If it happens it would need to come via a department within The LEGO Group rather than The LEGO Foundation, who are a strictly non-commercial arm.

Will LEGO Braille Bricks appear in regular LEGO sets without the printing?

Braille Bricks are a change to one of the most essential icons of the LEGO brand, the 2x4 brick. This is not a change the company would have made lightly and surely there were many internal discussions around this. We don't know, but permission for the removal of studs from the classic LEGO 2x4 might have only been granted on the basis that these bricks remain a non-commercial product forever. Another factor may have been the printing, which clearly identifies them as something different to the usual brick. So perhaps the only unprinted ones you'll ever see are the prototypes in this photograph!


However, given they created so many new moulds for these bricks perhaps they'll want to get better use out of them. Indeed, we were very surprised last year to see a 2x4 brick with cross axle holes (39789) released for SPIKE Prime, so it is not without precedent to see the 2x4 amended.

These is another possible reason they won't put these in regular sets and it is to do with 'clutch power', which is the name TLG give to the strength of the connection between bricks. It is more important than you think; the company spent a long time getting it right initially and it remains an essential, subconscious part of the LEGO experience. Just remember how nice that feeling of sticking together and pulling apart LEGO bricks is! For LEGO Braille Bricks, the clutch power is weaker than a classic 2x4 because it doesn't need to be as good for building; rather it is more essential to facilitate their easy addition and removal to a baseplate. So that might add structural considerations if a designer used them in a retail set but that is a minor concern; more importantly, the feeling of attaching or detaching them doesn't match the user's expectation of how strong the clutch power should be.

Aren't the studs on LEGO bricks too big for young children learning Braille?

Educators have pointed out that reading Braille that is larger than the reader's finger encourages an up/down motion, rather than solely moving from left to right. This is known as 'scrubbing' and is discouraged as Braille should be read as the fingers pass over the letters, rather than stopping at each letter to determine it.


The LEGO Foundation's response was to stress that this is a product for those initially learning Braille and is not to be considered as a standalone product. Obviously it's not intended for long tracts of text, either!

The Foundation consider the involvement of the LEGO brand as a positive and creative way to get children interested – and then, more deeply engaged:

"With thousands of audio books and computer programs on the market today, fewer young people are learning Braille. Yet, individuals with blindness or impaired vision all over the world rely on Braille to work, study and enjoy their daily lives to the fullest. This simplistic but highly practical educational tool will teach a range of skills needed to thrive."


Why use a 2x4 brick when Braille only requires six dots?

Although standard Braille is based on a 2x3 grid, LEGO Braille Bricks use a modified 2x4 brick. The additional space is used for printing the corresponding letter, number or mathematical symbol. As the Foundation explained, this allows "sighted and blind children to play and learn together on equal terms." Partially sighted people learn Braille too.

There's another advantage to that extra space, which we will come to next.

Won't kids place bricks the wrong way up and get confused?

Orientation – especially placing the bricks at 180° – was considered as an issue during both development and testing. The element designers initially considered adding an orientation device such as making the letter embossed, as you see in Stine's presentation below. 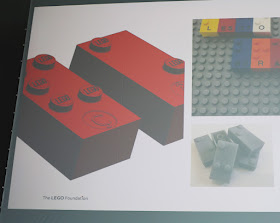 However as mentioned earlier they didn't want to alter the classic LEGO 2x4 brick more than necessary; so while orientation is important, the LEGO brand must also be considered.

Furthermore, they found orientation is simply part of the learning process. All letters in Braille contain dots in their top row, and LEGO Braille Bricks are 2x4s with that empty section at the bottom. Children quickly learn when a brick is incorrectly placed, they found. Consequently there is a category of activities on the LEGO Braille Bricks website devoted to orientation.

READ MORE: The LEGO Group aim to make all products from sustainable materials by 2030. We take a detailed look at their first efforts, made from sugarcane