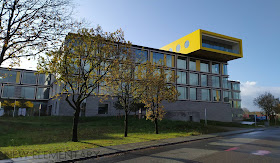 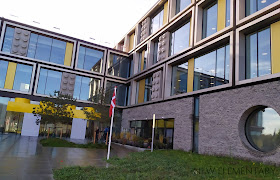 It’s actually been operational for a while, since people have been working there for some time now but 28 October 2019 was the official opening, held in the temporary canteen (that will eventually become the new employee "P-shop" store, while the final canteen will open next August).


What it is... is beautiful

Right now the entrance of the building is to the back of where it was before, where the old factory was, in Højmarksvej. 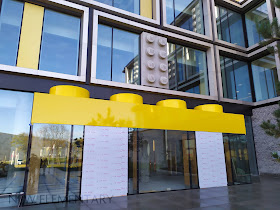 It’s very easy to recognise because there’s a huge 1x4 yellow plate that marks it; a plate that was spotted some months ago by designer Mark Stafford while it was being transported through Hans Jensenvej, near Innovation House where designers work. 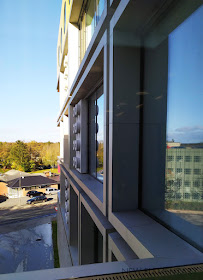 That plate is not the only upscaled LEGO element in the building. On the outside walls, between the windows, you can see lots and lots of huge grey 2x4 plates, too. Also, the two yellow sections on top of the building (of which only one is currently ready) probably look like huge LEGO tiles from the sky, or at least they do in the computer generated images in the original project! 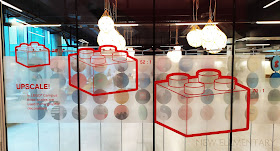 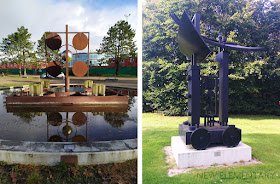 And, in the public park that will eventually surround the building, it will hopefully be possible to admire two historical sculptures based on LEGO parts: Arnold Boutrup’s “LEGO Symbolik” built in 1982 for the 50th anniversary of LEGO (that currently looks a bit abandoned in what has become an unpaved, off-limits parking lot) and Robert Jacobsen’s “LEGO”, that had been sitting near the old HQ since 1976, but has now been removed for the construction site. 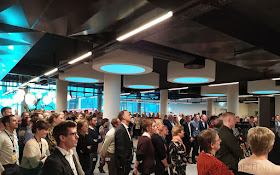 Before the opening, Vivi K. Schlägelberger, Play Director in the LEGO Group, had the participants play a bit with LEGO parts (2x4 DUPLO bricks, actually), as they generally do in these occasions, to get people in the right mood. And then the official opening began. 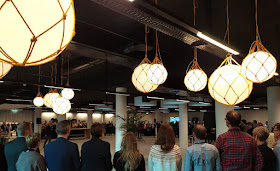 The first to speak was Thomas Kirk Kristiansen, active member of the fourth generation of the owner family, Deputy Chairman of LEGO A/S, Deputy Chairman of LEGO Brand Group and Chairman of the Board of LEGO Foundation. He talked about how, when they first saw the projects for the upcoming building, his father Kjeld thought that something was missing, and an old publicity shot from the 1970s was used for inspiration: the image of a kid holding something he had built out of LEGO parts. It wasn’t exactly clear what it was, but the kid knew exactly what it was and clearly felt joy while building it. And that is what they intend this building should embody. For the occasion, they turned this now-iconic image into a LEGO mosaic that was presented during the opening. 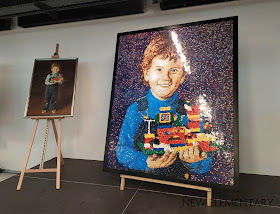 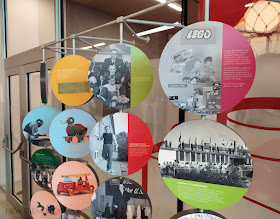 After Thomas, it was Niels C. Christiansen’s turn to speak. Christiansen (not related) is the current CEO of TLG and he talked about how this building, or better this "super-building", is not just a building: it’s a workplace but it’s also the LEGO version of the lighthouse – for all employees, not just the ones actually working there, but also the others all over the world. It’s an example for all the local offices too. He joked about having to climb the stairs everyday, but he also pointed out that given a place like this to work, he wants to drive all the way from Aarhus (where he lives) rather than working from home. He also pointed out that the irrigation for the public park outside will come from the rain that will fall all over the complex, and that the nearby carpark (the one that has road baseplates for external walls) has over 4000 solar panels on its roof, enough to cover for half of the needs of the Campus. 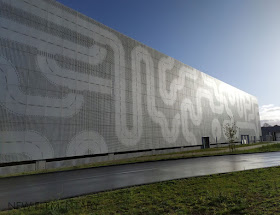 We then had the official opening, that consisted of Thomas, Niels, Kjeld and Ib Kristensen (the mayor of Billund) putting four final sections in the mosaic of the kid. 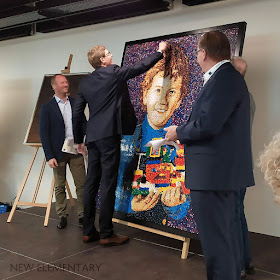 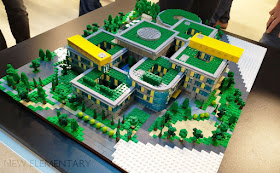 It’s worth noting that besides the mosaic, there was also another model on display, a model of the (complete) campus itself, in microscale. 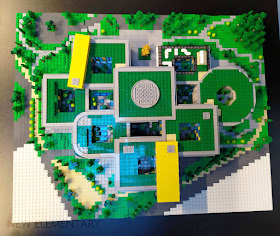 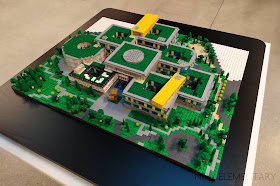 At this point, we representatives of Recognised LEGO Fan Media were taken to see a huge model (more than 3 meters long, 90.000 bricks) of the ship “Jutlandia”, built by AFOL Arjan Oude Kotte that has just been set up and is just near a bar behind the temporary canteen. 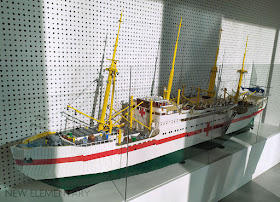 It really is a wonderful model that was shown at LEGOWorld Copenhagen 2015 and has been sitting in some custom crates for a while, waiting to be put here on display. 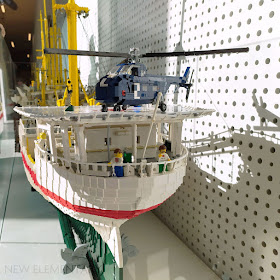 Taking a tour inside LEGO Campus 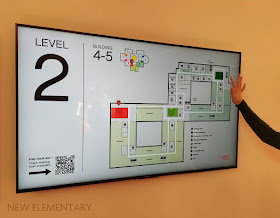 After that we had a guided tour of the buildings of the Campus that are already open. It’s basically just two buildings for now: numbers 4 and 5 called “Into the Woods” and “City of Stone” respectively. 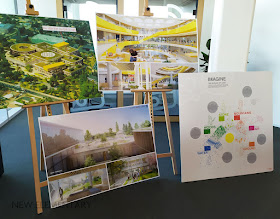 Every building has a theme and a colour (green and light green for these two). We went to the top floor with the largest elevator I’ve ever seen, and the top floor in this case is one of those oversized yellow tiles, or “Skybox” as they call them. The first section of it is a retail area with a small showcase, and then there’s the executives’ lounge. 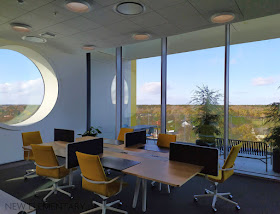 The first thing I noticed here was the old LEGO logo that was made by AFOL Bruno Kurth in 2008 for the company’s 75th anniversary. Copies were donated to Kjeld, Jørgen Vig Knudstorp (then CEO) and Jette Orduna (of the LEGO Idea House).

But back to the Skybox (which might very easily be the highest point in Billund, since it seems to be a little taller than LEGO House’s roof). The sight from the round windows is amazing. 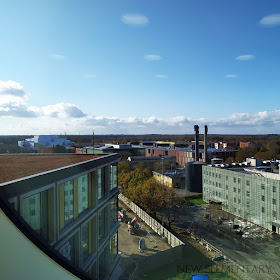 The weather was unbelievably good (it wasn’t the two days prior, trust me) and we could see everything in Billund and beyond. 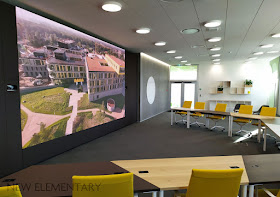 We moved on to the board room, used for board meetings but also as a conference room when needed, and then we reached the light green stairs and went down to the second floor, which was the floor that we would be visiting. 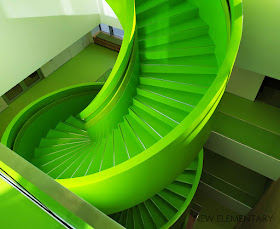 Employees follow the "LEGO Ways of Working"; a method that is basically activity-based working. Employees in the Campus don’t have a fixed desk where to work but they still belong to a "neighbourhood", similar to the colleagues in your office or near your desk. Basically, neighbourhoods are there not to lose the sense of belonging in this ultra-modern way of working. (Anneke Beerkens, Senior Workplace Anthropologist at the LEGO Group, told us all about this process and soon we will publish more detail about it on our Patreon for our Sand Blue, Medium Azure & Vibrant Coral patrons including many more pictures, especially of the models inside the building.) 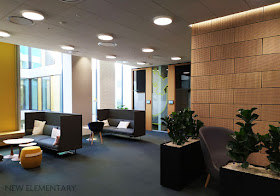 We had the chance to see everything already working, during the visit. In every neighbourhood you can find different kinds of areas including those that are quieter, for individual work, as opposed to less-quiet areas for collaborative work. The quietness of the area is shown by some tiles on the floor; the darker the tile, the quieter the area.

There are also many meeting rooms. Each and every one has a name based on the theme of the single building, and the names were proposed by employees during a competition. Each of the winning employees had the chance to team up with an AFOL and, for a couple of days, build MOCs that represent the names. Right now the MOCs still have to be moved in the actual conference rooms but we could see many of them at the end of the tour when we briefly visited the current “mini” People House. 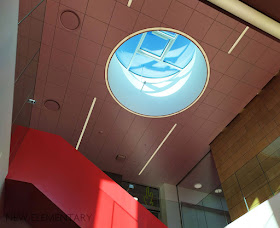 The real People House, where employees can go to relax and play, is not ready yet so they just set up a small temporary one. When we visited there were a few people playing ping pong and others doing stretching exercises. 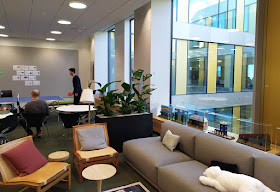 Eventually the People House will be spread over two or three different buildings and use up most of the lower floors in those buildings. There will also be a guest house, for visiting employees who’ll be able to stay there for the time they need. 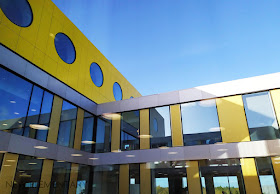 All in all, what’s already open and active sure looks great and very effective. The real “juicy” parts of the complex, though, are probably yet to come: the People House, the open atrium with the entrance  back in Åstvej, the public park outside, the minigolf course on one of the roofs (if indeed it’s still planned!) and certainly much more. But it was a fun opening ceremony, and for the rest we’ll have to check back in a couple of years! 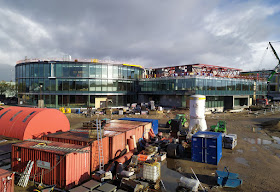 READ MORE: See the new LEGO elements we are including in our upcoming Parts Festival