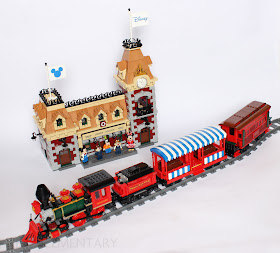 When I first heard about this set, I wondered it if would be possible to motorize it with Powered Up elements, like how 10254 Winter Holiday Train could be upgraded with the Power Functions System. I was positively surprised to discover that Powered Up components were already included in the box. 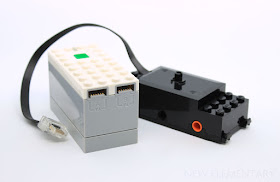 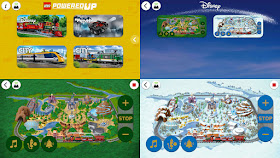 When you click on the Disney icon, you get to choose between a summer and a winter environment. The only things that differ are the background (obviously) and the music that plays when you tap the music note icon in the bottom left corner. The two icons next to it do a whistling and a ringing sound, and you also hear the sound of a train running faster and faster as you accelerate. When the train stops (whether by tapping the Stop icon or with the + and – icons) a braking sound can be heard. However I regret the speed of the train isn’t displayed like on the City trains profiles.
The Disney Train and the station can clearly be seen in the foreground, but the station doesn’t really look like the set version. Perhaps it was drawn after a prototype of the set?

The Powered Up app isn’t the only thing that has been updated with this set. Train wheels and wheel holders have been redesigned too. 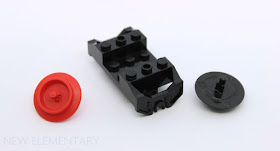 While the black wheels and holder can also be found in the Hidden Side set 70424 Ghost Train Express that was released a few days ago, the red wheels are so far exclusive to the Disney Train.
The wheel holder (here shown on the left) is the most interesting redesign, because the central section has been standardised to be more like a 2x3 plate, which give the part  with extra connection points. 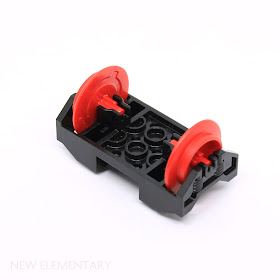 The wheels attach to the holder with an integrated bar. Its diameter is slightly below 3.18mm, which means it can spin freely in 3.18mm holes. That makes it possible to integrate it into custom bogies, and I’ve built a quick example of how the wheel can be held in such a manner.

I’ve seen people worried about the friction caused by the all-plastic solution, so I decided to compare how far the train went with the old wheels and with the new ones. 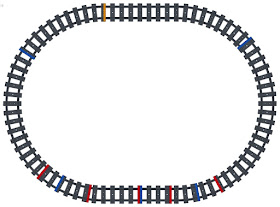 The train started at the orange line, going anti-clockwise, and was programmed through the Powered Up app to run during one minute at half-full speed. I repeated this test five times for each set of wheels. The blue lines show where each of the five tests with the metal axles stopped, and the red lines show where it stopped with the new wheels. The train always made more than eight full loops, but the results with the new wheels are more constant; the train with the metal axles once made barely more than eight loops, and once almost completed a ninth loop.

Clearly more testing is needed; if you care to replicate the experiment please share your results in the comments! 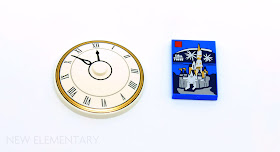 I wonder if it’s a reference to something from a Disney movie or Disneyland, or if it’s some sort of signature by the graphic designer.

Minifigures in 71044 Disney Train and Station

71044 Disney Train and Station comes with five exclusive minifigures : Mickey Mouse, Minnie Mouse, Goofy, Chip and Dale. They all come with front and back torso printing. 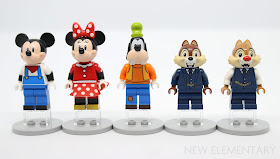 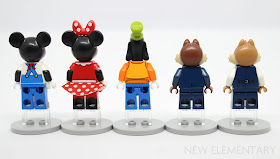 Mickey, Minnie and Goofy have printing on the front and the side of their legs to represent shoes (respectively in Black, Bright Yellow and Dark Brown) and Goofy also has a Dark Orange patch printed on his right leg. 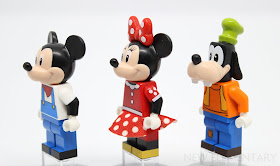 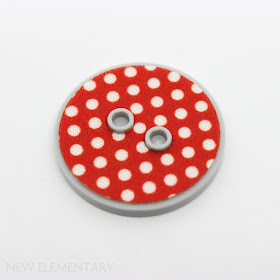 Mickey and Minnie have dual moulded arms, and Minnie comes with dual moulded legs too, as well as arm printing. To me she’s really the highlight of this minifigure selection. Much to my surprise, she doesn’t use the usual skirt element (24782) but a new skirt made of cloth (6257970 | 50689). I suspect it was decided to create a new element to allow Minnie to sit down and ride the train without having to remove her skirt. The new element is round and has a diameter of a bit less than four studs.

The other character that benefits from a brand new element is Goofy. He never appeared as a CMF before, therefore it was necessary to create a new element (6266998 | 55641) for his head. I would have thought his hat was a separate element that could be attached to his head with a 1.5mm pin, like Minnie’s bow, but it’s actually one single new mould. Perhaps the designer could not introduce any more new elements in the set so they chose to go with a single-element solution instead?

Because of that, the head is actually dual-moulded with a Black part and a Light Nougat/ Light Flesh part, with printing for his nose, teeth, eyes and hat.

Chip and Dale both sport a very elegant three-piece suit with a pocket watch in their vests (a necessary accessory if you don’t want to miss your train). They basically have the same outfit, except that Dale doesn’t wear a jacket. 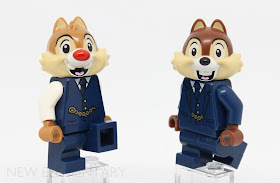 Due to their short stature, they use the same short articulated legs as do their CMF counterparts, which appear here for the first time in Earth Blue / Dark Blue (6263969 | 37364). 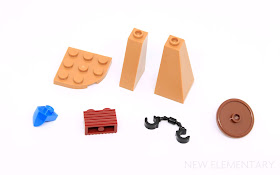 Chip and Dale’s legs aren’t the only recoloured elements of this set. You also get :

It is always nice to see new bricks and plates in Medium Nougat, still an uncommon colour outside of minifigure parts.

There are four booklets in the box. One for the C.K. Holliday-inspired locomotive and tender, one for the gondola car, one for the parlour car, and a fourth booklet for the train station. This allows several people to build at the same time, which is perfect for assembling the set with family or friends.

A faithful rendition of the C.K. Holliday locomotive should have been Earth Blue instead of Earth Green/ Dark Green, so I suspect this change of colour was made to reference the second locomotive, E.P. Ripley.

The front bogie is assembled around a Technic structure, and makes good use of the extra attachment points offered by the new wheel holders (6253474). 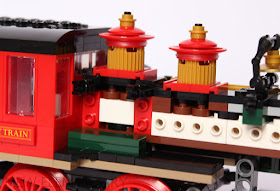 Moving towards the front, we see another part used in a clever way. Two spanners (400626 | 4006) are used to represent the bars that hold the cowcatcher. 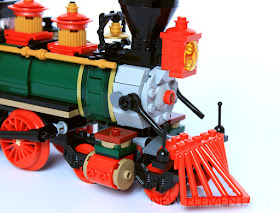 To help fitting a minifigure inside the cab, its roof can be lifted. A nice detail from the designer! 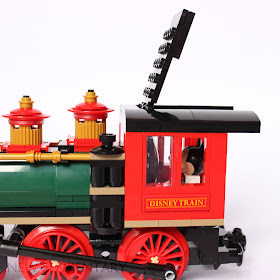 The tender is quite simple and its main function is to hide the Powered Up hub. Even the top is covered in black parts that mimic coal. To access the green button, you simply have to lift a Plate 2x3 With Holder (4297713 | 30350).

Then we move on to the gondola car, and just like the cab of the locomotive, its roof can be lifted to make it easier to place minifigures. 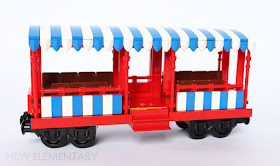 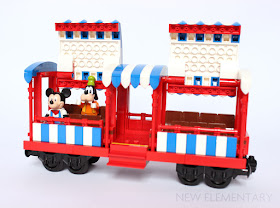 There’s plenty of room below the roof, even Goofy and his hat can fit on the second row of seats. The build is very sturdy thanks to its use of door frames (4550015 | 60596). There’s one of them placed at each end of the car, and to fill the gap at the bottom of the frame, the designer used a 2x4 tile. Those tiles are attached in a clever way : the second row of seats is attached with a half-stud offset thanks to Reddish Brown 1x3 jumpers (6251470 | 34103). A 1x2 – 1x2 inverted bracket is attached to this jumper, and is used to pass two 1x3 plates through the door frame. Then the tile is attached to one of the 1x3 plates with its tubes, allowing to cover the complete width. 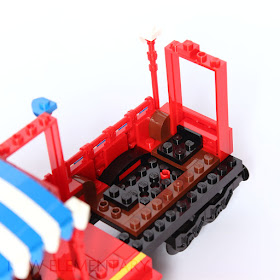 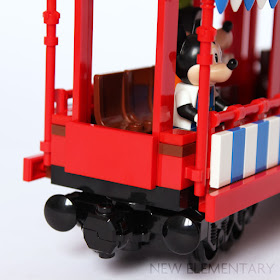 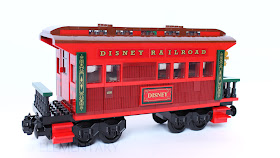 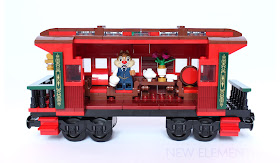 This time, the roof can’t be lifted; you detach a side of the car to access the interior.

After the train, we build the massive station. 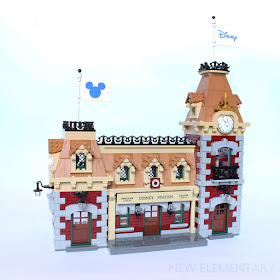 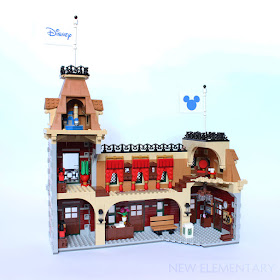 The back is open, to access the interior, and we can see the same armchair and flower pot as in the parlour car. The bench is a clever build, using headlight bricks to provide a small spacing between the 1x6 tiles.

Hidden in the clock tower, we can see a tiny version of 71040 Disney Castle, which uses no more than 29 parts. 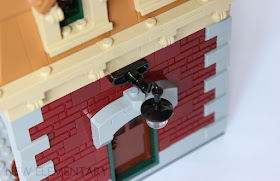 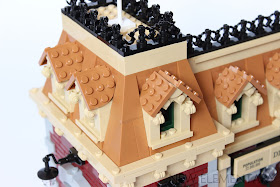 However, my favourite technique in the station is the way the roof above the windows is built. 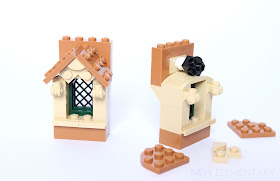 While it’s not a particularly complicated technique (it’s just a Brick 1x1 with 4 knobs rotated at 45°), it’s amazing how everything here is a perfect fit. There’s almost no gap between the 3x3 rounded plates and the 73° slopes.

I didn’t have high expectations for this set. I’m neither a Disney fan nor a train fan. However, this was an enjoyable build, and I have a lot of fun piloting the train through the Powered Up app. In addition to that, the station is splendid and full of Easter eggs and references, and the minifigures are beautiful, especially Minnie.

Looking at the set’s inventory, I feel it’s City builders that would be the most interested in this set as a parts pack, given how many parts (including recoloured parts) are used in the Station. For example, the numerous black handcuffs provided by this set would make nice fences. I could also see medieval builders making use of the new elements in Medium Nougat.

READ MORE: Our review of the parts and techniques in LEGO Ideas 21318 Treehouse