We head back to 2017 today with 21036 Arc De Triomphe, from the perspective of someone who's never bought a LEGO® Architecture set before; Jay Phoenix, who can be found on Flickr and Twitter.

So, first off I’ve got a bit of a guilty confession to make – even though LEGO Architecture’s been around for a decade now and had over 40 sets released… I’ve never actually been interested enough in the theme itself to actually buy any of ‘em before. As someone who’s always been more sucked in by minifig-scale themes like City, Friends, Creator and occasionally more action-y ones like Ninjago, Architecture has always been one of those things I’ve occasionally seen on the shelves, gone “Oh, that looks alright I guess” and continued on my merry way. 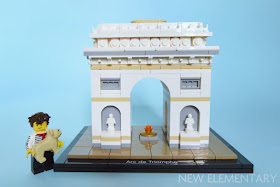 So when Tim handed me a shiny new copy of 21036 Arc De Triomphe to rebuild for here, I had a little bit of a think about how exactly I should approach it. Instead of just rebuilding the model into something else like last time, I decided to do a lil’ review of the set itself as an insight into the mind of an ‘Architecture Virgin’, as such (also, note to self: never use the phrase ‘Architecture Virgin’ ever again).

So, let’s begin with… 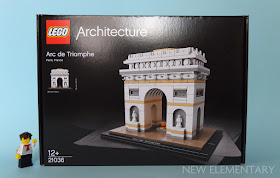 Upon seeing the box for the first time, the word ‘premium’ immediately pops to mind – the clean, stylish design aesthetic combined with the front-flap packaging suits the “for the desks of professional mature adults only” look they’re going for. Too bad it’s about to be built (and re-built) by an immature 19-year-old instead then, ey? Let’s open up and…

…well, straight off the bat there’s this encouraging message, egging you on and putting you directly into the mood to enjoy® your building experience™. Or something. Don’t tell me how to feel, box.

Before we move onto the build though, as this place is called ‘New Elementary’ and not just ‘New’, let’s take a quick look-see at this set’s new parts and recolours.

As far as sets go, there’s really not a lot for me to point out here in terms of new stuff is there? The majority of the pieces and colours here are fairly common, with these ones proving to be less so: from left to right, they are…

Lastly, there’s the one completely exclusive printed part - Flat Tile 1X8 No. 55 (Element ID 6191892). It’s not the most exciting of prints, but does its job well and certainly helps to bring peace of mind to those who mistook this set for any other large iconic intricately detailed arch out there. Thank heavens for that!

Now, let’s get straight on down to building-process-city! Or at least miss the first bus there, hop on the one 20 minutes afterwards and get stuck in traffic for ages. I’m not great at metaphors, so let’s get to the point: it’s build time!

First off, we give that printed 1x8 tile a brand new home in the form of a base for the model which is clean, simple and a good contrast to the main bulk of the model. It also reveals how kinda terrible my lighting setup of “taking the pics in front of a window and hoping it works” is. 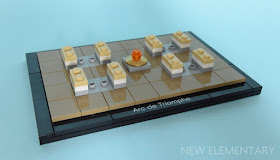 Next we coat most of the base with Sand Yellow [TLG]/Dark Tan [BL] tiles, and one of my main nitpicks with the build for this set begins to take fruition – the sheer amount of repeated builds that pop up. It’s pretty unavoidable in a model like this, but it still kinda takes the enjoyment outta the process when you have to do a thing eight times over. Anyways, here’s several towers of 1x4s that I definitely didn’t have to redo after getting the colours mixed up. No siree, no mixups here. 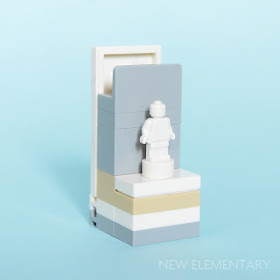 We’re then instructed to build four of these lil’ things, and as far as small builds go these are probably my favourite part of the set – they’re really simple but blend in incredibly well. These comfortably slot into the gaps between those 1x2 stumps from the last step… 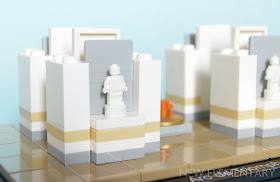 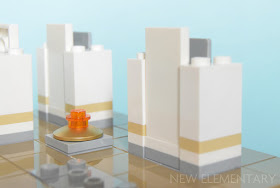 …exactly like so! Whilst the inside walls of the arches aren’t completely flat they get the idea across fine and, honestly, when you’ve got the lid bit on, it’s completely unnoticeable unless you’re really looking for it.

The outside bits, meanwhile, look bloomin’ lovely – the mini-minifigs as tiny statues works really well and the usage of grey behind it really makes it stand out from the rest of the model instead of just blending into a white/beige wall. S’good. 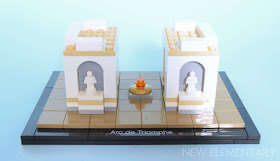 Tell you what though; those wall sections look even better with the arches capping them off. I also really appreciate the use of beige and light grey to divide up the big patches of white – it may not be “accurate” to the real deal or whatever but it definitely makes the details stand out a lot more than if they just did the entire thing in white. Wise move lads. 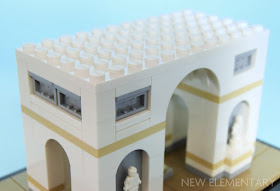 The two sides are then joined up by six of the big ol’ 1x6x2 arch pieces, and some additional detailing is formed next to these by inverting 1x2 jumper plates - it’s a rather effective lil’ representation of the murals that adorn the real thing and I rather like it.

Those four 2x2 tiles with technic pins I mentioned earlier pop up here, along with an interesting structural SNOT build. It’s also the first sighting of the fairly high-quantity 1x2 white rocker bearings, although it’s just the calm before the storm…

We’ve then got two of these long bits to pop together, which neatly slot onto the 2x2 tiles with Technic pins on top of the model…

…like so, and they look pretty decent! The small gaps between the side and front bits look a tiny bit unsightly from here though if I’m being honest. Why, if only they could be conveniently covered up by a rim of both light grey plates and white tiles going all around the edges… 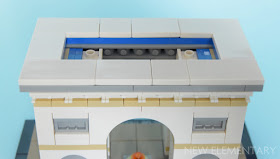 …and whaddaya know, that’s exactly what just happened! What an amazing coincidence or magic or whatever. 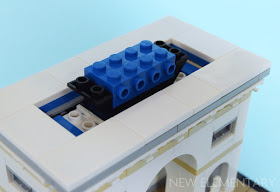 There’s also some Bright Blue [TLG]/Blue [BL] 1x10 plates lining the inside of this section, but when the top bit goes on these are never seen again so it’s nothing worth fretting over. Saves looking at the same three colours for the entire build I guess.

I sure hope you liked all that blue too, ‘cos here’s a bunch more of it in the form of some 1x4 bricks with side studs. There’s also a couple of Transparent Blue 2x2 bricks under this too, for reasons. It’s a weird choice of colour but it doesn’t affect the final model in the slightest so eh, whatever.

We’re then given a use for all that raw SNOT power with some more carved detailing, this time utilising the ever-familiar 1x1 studs and plates by simply alternating them on the sides. Simple as this may sound, it actually looks rather nice and represents the round shield-y bits at the top of the real thing rather well. The whole layer is a lot less indented on the real arch, but at this scale it wouldn’t really be that feasible so I’m fine with it (and anyways, I buy sets with ninjas piloting giant robots, realism’s not exactly at the top of my agenda innit).

The last bit of the build is the top layer, and there’s really not much to mention here regarding the build to be honest – just a good ol’ studs-up build, plain an’ simple. It’s got all eight of those quarter-circle tiles I mentioned earlier though, so there is that to look forward to I guess. 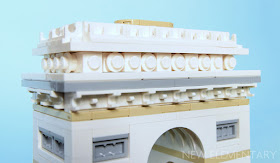 Pop the roof on and bob’s yer uncle, the model’s all done!

As far as Arc De Triomphe models go, the finished set’s pretty decently sized – at around two-and-a-half minifigures (or in layman’s terms, 11cm) high, it’s definitely not gonna blend seamlessly into your Winter Village layout (though I’d absolutely love to see someone try for a laugh) but it’s perfect for bunging on your desk at work to impress colleagues or show off the fruitful results of your favourite hobby or whatever. It’s kinda weird seeing an entire theme (outside of the big D2Cs of course) solely aimed at adults though, at least for me personally – as someone that’s never had a dark age it’s a bit jarring to see a super-mature model of a real-life famous building sharing shelfspace with an identically-priced flying motorbike or such.

Either way, it’s undeniably a really nicely detailed model for its price point with a lotta really neat SNOT-work, especially around the top area – as much as I expressed slight horror at the amount of rocker bearings earlier, the resulting architectural detail they provide absolutely suits the model down to the ground. It’s not overbearing or completely bare, it’s just the right amount of detailing – it’s a bit like Goldilocks, basically. It’s Goldilocks greebling.

But anyways, that’s the review pretty much all done then – a very nicely detailed model that looks like its source material, but would I recommend buying it at full retail? Well, that really depends on your own particular LEGO-based interests to be honest: whilst I’d fully recommend this to existing Architecture fanatics, more casual fans or just anyone that wants a nice-looking professional model for their mantelpiece, I’d kinda struggle to recommend this to people like… err, me. It hasn’t really got minifigs or tie-in media or playability of any type, it’s really just a very pretty model of a big French arch – but that’s fine because that’s exactly what it’s trying to be, no more, no less. 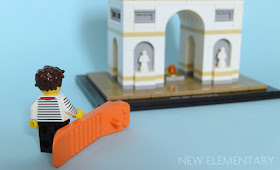 Either way, it’s not gonna stay in this current form for long because me and my mum Jea will be taking the set apart and using the parts to make something (or somethings) completely different! What will we make, you may wonder? Well, you’ll have to wait to find out!