Rounding off our run of the first creations by Gabriel Thomson (qi_tah on Flickr) using LEGO® Rotor, W/ 4.85 Hole (Design ID 27255) we have something altogether different once again!
So, I’m not that good at Space creations, but Nexogons seem made for them, so I thought I’d use the challenge to give the genre a go. I started off making a bulkhead doorway of some kind, but somewhere along the line it kind of morphed into a very large medal. A space medal… the Exalted Order of the Nexogon perhaps? 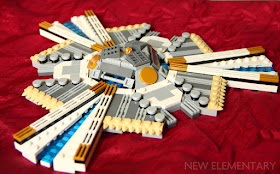 Looking at the amazing Nexogon Space designs that have been published so far, I definitely think that the other builders in the challenge would all be worthy recipients of such a medal. ;) 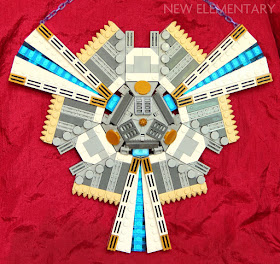 The raised centre of the medal is the tablescrap that I initially started from. I liked the shape of it and could imagine rows of them on the side of some kind of spacecraft, or as the raised centre of a vault door (it looked great with a steering wheel attached to the centre).

Getting it to sit flush with a wall proved tricky though, due to the half-stud offset of the jumper plates protruding over the edges of the 2x4 wedge plates (Design ID 51739). 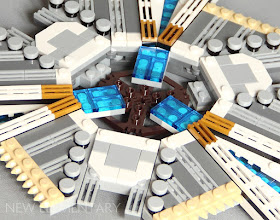 Hence my creation of the somewhat complex nonagonal hole in the middle of the surrounding medal that the Nexogon centre slots into... I’m sure there is a more elegant solution out there! 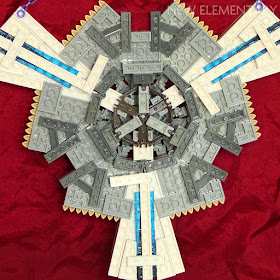 Pulling the wedge plates of the medal together to form a solid structure was also a little finicky. The A-frame wedge plates (Design ID 15706) on the back help a great deal in adding rigidity, although they are a tight enough fit connecting the plates to give the whole structure a slight convex bow. To be honest, it was this slight bowing that suggested the idea of a medal to me.. an example of one of those happy accidents that happen from time to time!


READ MORE: See Gabriel's tent created from Nexogons
Do you like buying stuff? Do you like reading New Elementary? Please consider following our affiliate links before you buy your LEGO sets and bricks (or anything); any purchase you make will send a few pennies New Elementary's way and that is hugely appreciated.

Products mentioned in this post were kindly supplied by the LEGO Group. All content represents the opinions of New Elementary authors and not the LEGO Group.
Tim Johnson Posted on 4/13/2017 08:12:00 am
Share