I was anticipating that the Spacers would use the pointed end of the Nexo shield to create some interesting intersecting shapes but did not expect this to be employed at such a small scale. The shapes and especially the spaces created by the blue and grey shields and their notches are my favourite aspects to Tim's build.

Naturally I am also swooning to see some new-ish Light Bluish Gray recolours in there too... namely Apollo studs and cheese graters! (Element IDs 6124825 and 6092111.) Both of these recolours premiered in LEGO Dimensions sets last year but are becoming more widely available.

Check out more pictures of Tim's ship at the end of this post, and you can also look forward to a special, secret project that Tim is creating for New Elementary in a few weeks' time!

As well as creating the ship, Tim also documented some of his investigations into the geometry of the parts that we sent him.

Tim immediately joined these new tiny wedge plates to existing wedge plates that are also two studs wide. These would make a nice set of stairs!

He also tried the trick of aligning wedge plates along their diagonal edges (using hinges) to see what happens, and you can see the results below. "You can't make a complete circle with these wedges but you can make a landing platform," Tim noted, and filled the gap pretty neatly with 2x3 wedge plates instead. Oh, and how cute is that ship? 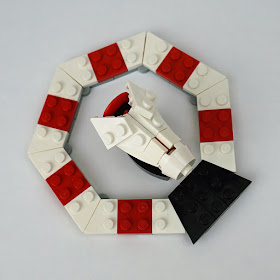 Ignore the orange parts for a moment. Tim noted that the Nexo Bot torso, which is littered with connection points on all sides, can therefore connect to itself in several ways. On the left of the image below Tim connected one of the sides with 3.18mm bars to the sides with the recessed stud, while on the right he connected the minifigure neck connector into the anti-stud. (Not pictured: you can also connect the stud to the anti-stud of course.) 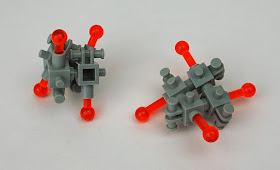 Once you have connected them, it is very easy to twist the assembly off at angles. "The trans-orange ball-bars demonstrate the angles that can be achieved," explains Tim. You might recall that this is an aspect to the Nexo Bot torso that Jason Briscoe also utilised yesterday in the chassis of his 'Small Tanker'. It is similar to connecting four 'Dalek' bricks (1x1 SNOT brick with studs on all sides, Design ID 4733) with bars but with the Nexo Bot torso the clutch is looser and gives a very smooth sensation as you rotate the parts. So this awkward new piece may have a quite unique functional aspect we hadn't anticipated.

I am amused that demonstrating angles was the only use Tim found for the "ball-bars". For the sake of completeness, the official details of this part are: (6131711 | 22484) Tr. Floure.Redd. Orange 3.2 Shaft w/ 5.9 ball [TLG] \ Trans-Neon Orange Bar 1L with Towball [BL]. Everyone seemed to struggle with this part. It is fantastically useful, but perhaps the colour made them difficult to include in models. They also come in Transparent Bright Yellowish Green [TLG]/Trans-Bright Green [BL] (Element ID 6139234) in 70332 Ultimate Aaron but I hope opaque colours will appear at some point soon. To his credit, Tim's use of them as geometric markers does make good use of their shape and colour! 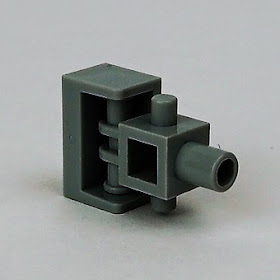 Tim noted that the Nexo Bot hip connector is "a perfect fit" inside the double corner panel. Indeed, it is a tight enough fit to be useful but obviously won't support much weight beyond the panel itself. It pushes the edges of the panel outwards slightly, so this technique would surely be considered an illegal use of parts by the LEGO Group for placing stress on the element. Yay! Quick, try it now!

Tim also created a pleasing SNOT arrangement for this new addition to the family of panels, as you can see below. 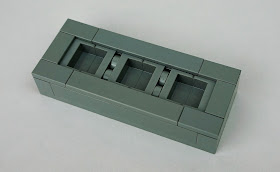 Like all of us, Tim explored the fun of the tessellation possibilities of the Nexo shield. Here are two of his most interesting tablescraps, ripe for Spacey usage! Tim really took the ability of this part to 'point at stuff' to the max in his build on the right: he attached the corner Nexo shields to 2x2 jumper plates so he could align the pointed ends. It's not a perfect fit, but that matters less given that you get a small space between Nexo shields anyway when you arrange them normally with the pointed ends together. 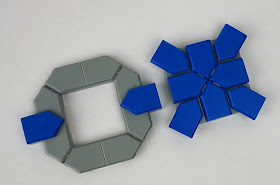 The Nexo shield has a chamfered edge, which reminded Tim (and other members of our Spacer gang) of the 1x2 ingot tile (99563). "I had hoped the bevels would match but they don't," Tim confirms. As you can see here, the Nexo shield is chamfered at 45° and the ingot at a steeper angle, but this doesn't need to stop you using both together, as Drew did in his post two days ago.


To finish, here are the detailed shots of Tim's microscale ship. 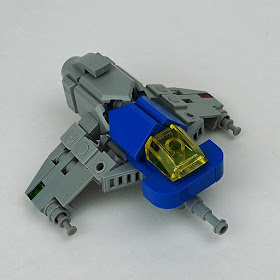 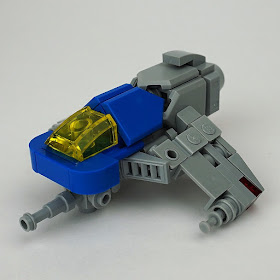 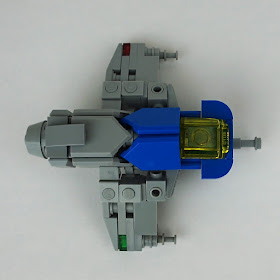 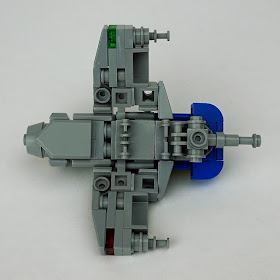 The Nexo Bot hip connector looks perfect so close to the hinge brick tops, especially the 2x2 one (6134). Great greebles, thanks Tim! You can follow Tim on Flickr here. Come back tomorrow for the next instalment!